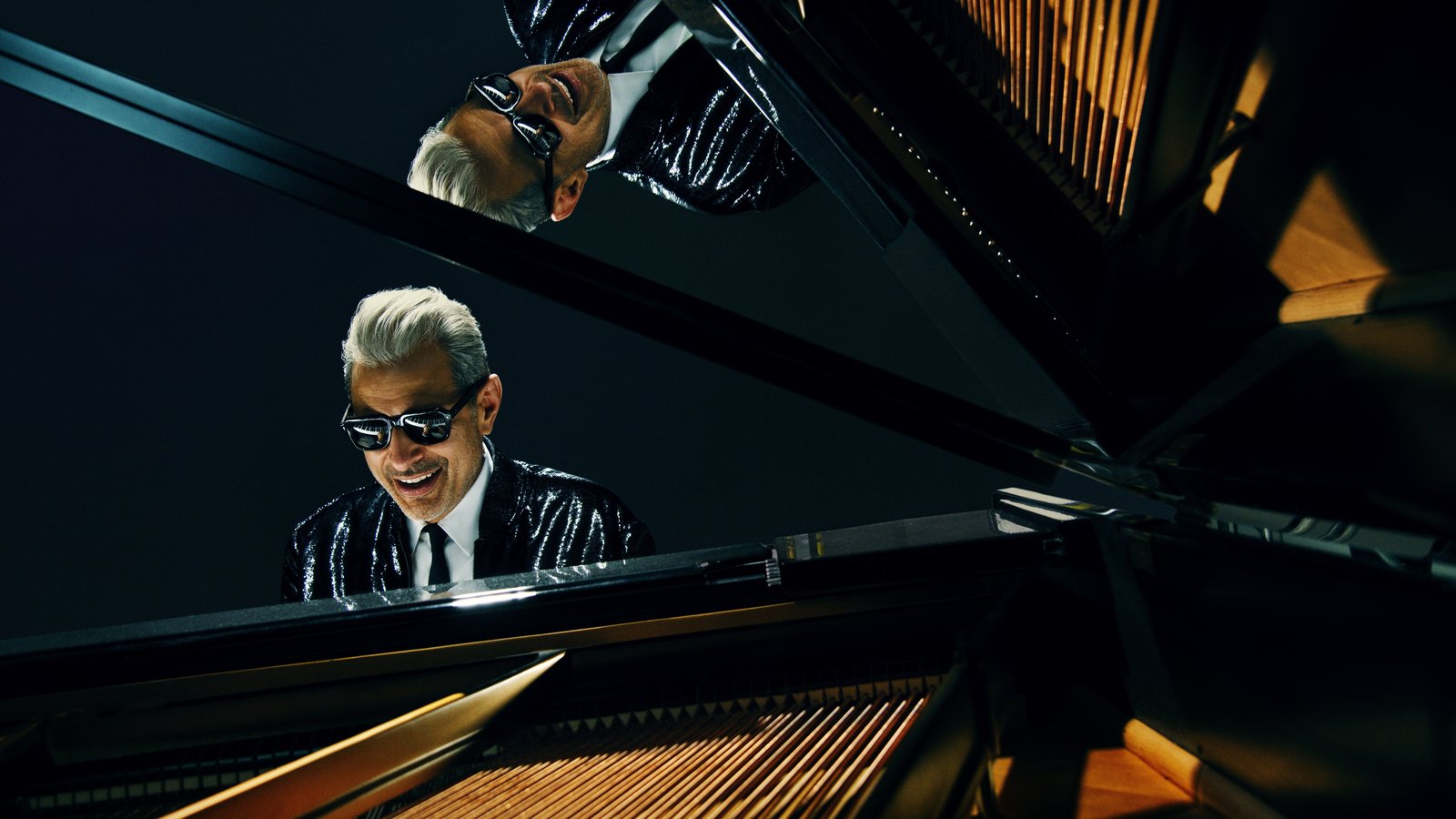 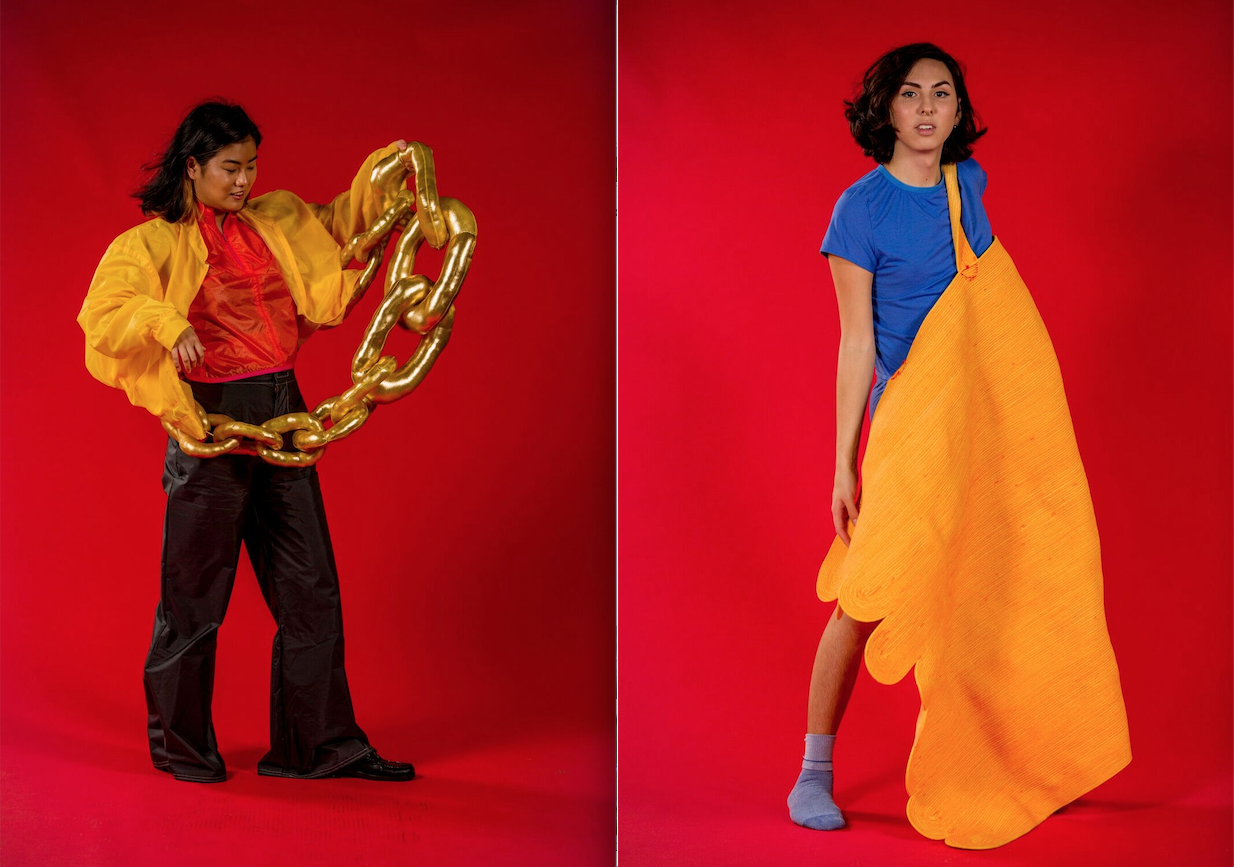 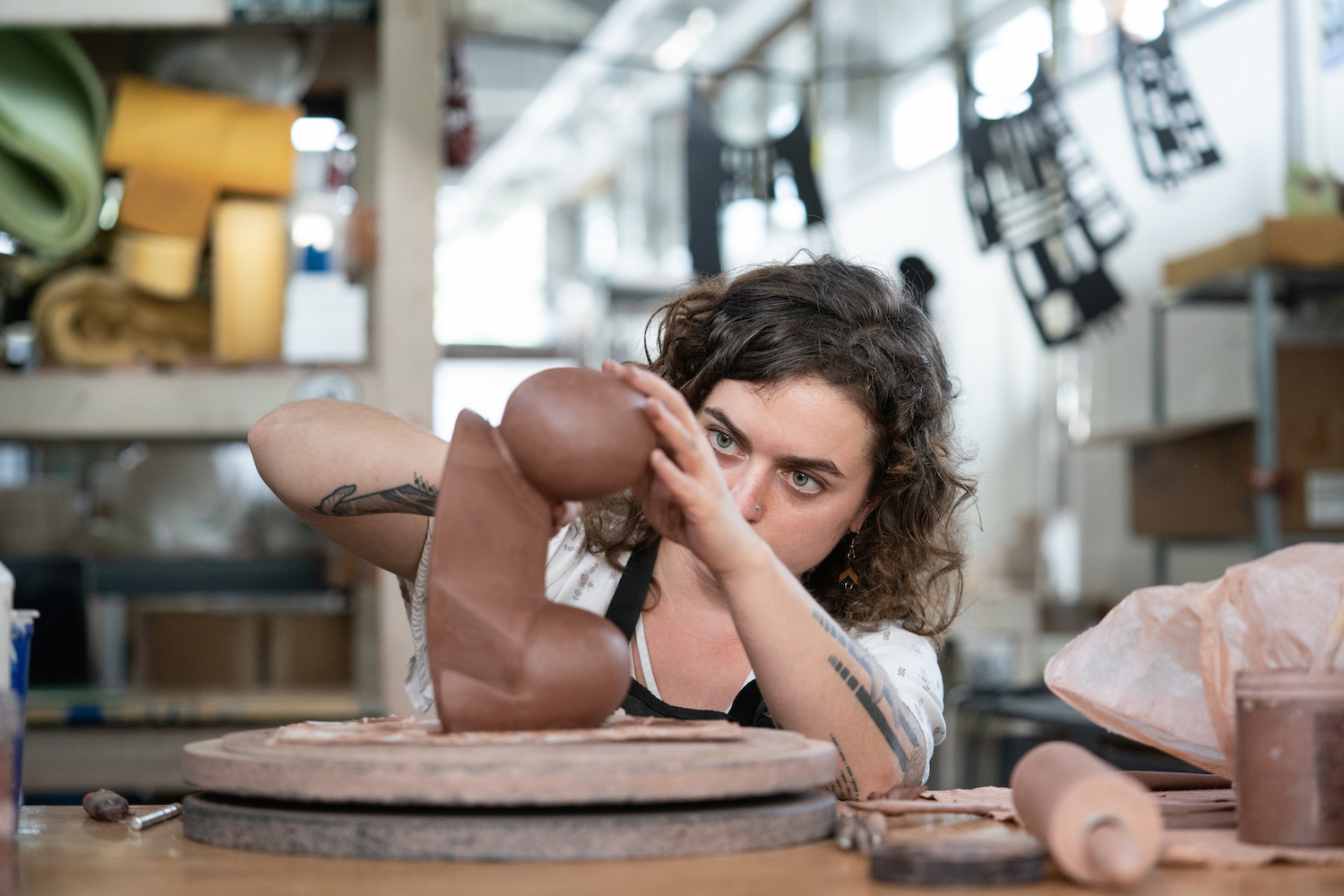 A Year After Reopening, Baltimore Clayworks Looks Towards a Bright Future by Suzy Kopf

The Baltimore Clayworks, a 38-year old veteran arts organization in Mt. Washington, recently celebrated its one year anniversary. After closing its doors in the summer of 2017 to file Chapter 7 bankruptcy, the non-profit reorganized itself under the leadership of a new board. Sue Patz, the new board president, admits, “It’s been a difficult year coming back from a closure; the main focus of the leadership has been to reach financial stability.” Although daunting, Clayworks seems to have the right mix of determination and widespread support, which has enabled it to bounce back from a close scrape. 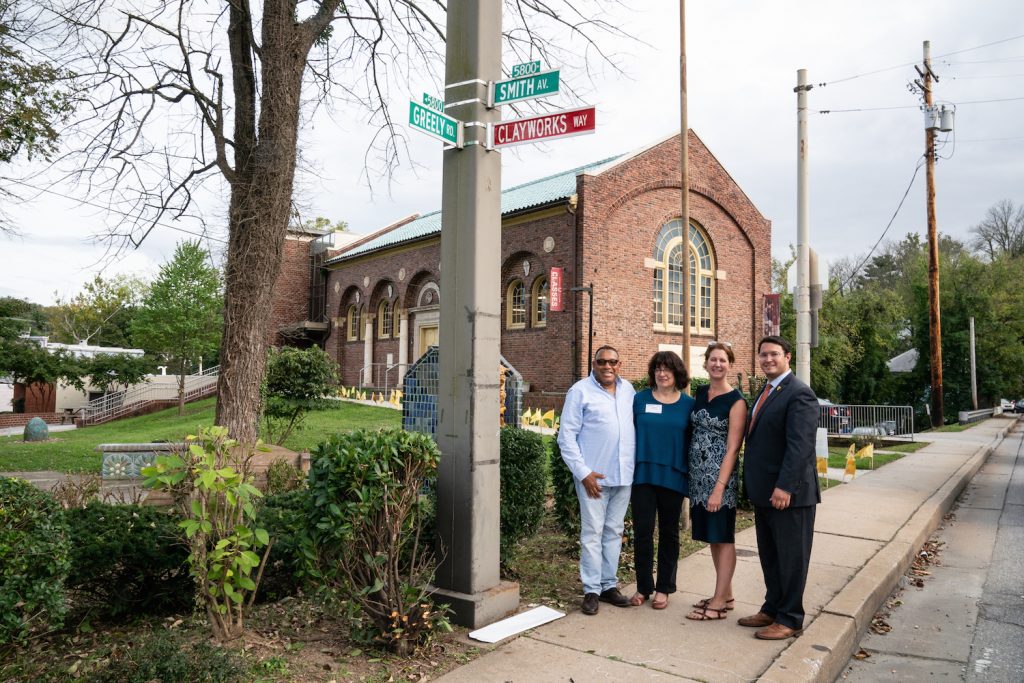 The arts organization has now resolved its $1 million dollar debt inherited from the previous Board and administration, with all debt–both short and long term debt–addressed. They have paid  $350k to over 300 creditors, repaying an additional $200k to resolve line of credit obligations, and the refinancing of our commercial mortgage with a new and positive relationship with Columbia Bank. Clayworks also restarted operations one year ago, offering classes, free public exhibitions, community arts and artist residency programs. Having tackled these hurdles this first year since reopening, Clayworks must maintain a steady revenue stream to support its work. Obtaining continuing foundation, corporate, and individual donor support remains key to Clayworks ability to succeed each year.

Originally the organization feared it would have to sell one of its historic buildings. Comprised of the former Enoch Pratt Mt Washington library, purchased from the city in 1980 and the former Sisters of Mercy convent which was donated to Clayworks by The St. Paul Companies in 1999, losing either space would have significantly impeded Clayworks’ currently high levels of programming for the public and for resident artists. Instead of selling, the organization  refinanced their commercial mortgage and settled up with their creditors, paying back the debt by October of this year. They celebrated this incredible accomplishment last month on the Global Day of Clay on October 10 with an official street renaming, tours of the facilities, and a community clay project. 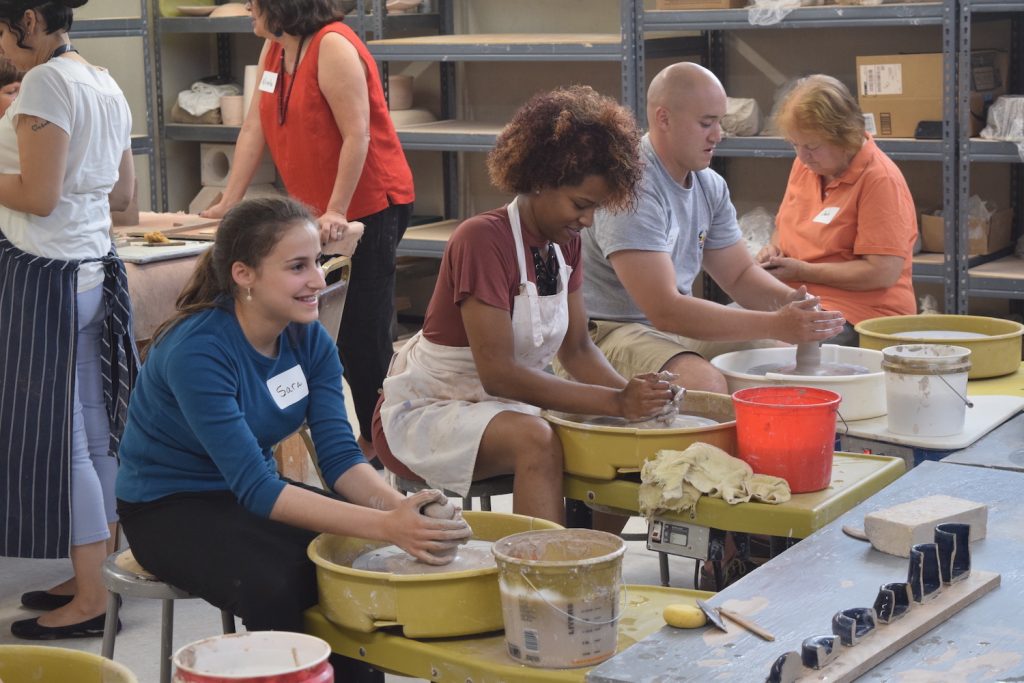 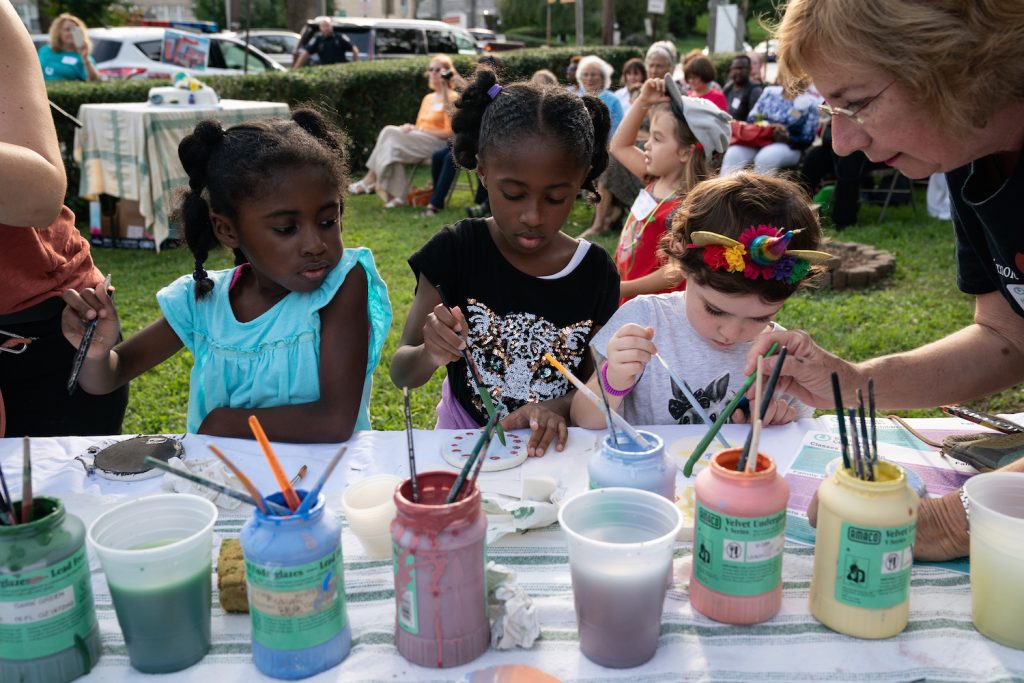 Naturally, the new leadership’s key focus is to make sure Clayworks never needs to declare bankruptcy again. Their preventative efforts have included digging back into the programming that has served Clayworks well for decades— community outreach for the entire city. According to Patz, Clayworks was the first Baltimore arts institution to establish hands-on arts programming in the early 1980s and remains dedicated to serving underserved communities as well as “working with people in transition.” One of 84 recipients of Baltimore City’s new twelve million dollar Children and Youth Fund, Clayworks has always had programming for school-aged children as well as weekend and family programming.

New in the reboot is a yet-to-be-named program for 18-23 year-old young adults aimed at developing job skills in 3-D technologies, exhibiting, and marketing that concludes with an exhibit of the students’ work. New Executive Director Cyndi Wish, formerly of The Arts Center in Jamestown, Northern Dakota, points out that the goals of this program reach “beyond making, beyond functional pottery” where participants will acquire both job skills and a passion for the arts.

A new resident of Baltimore, Wish, along with a dedicated board and staff, is working hard to improve the reach of Clayworks. Wish explains that “there are a lot of conversations about inclusivity and breaking down barriers to working with the organization and working with clay in general, both physical or conceptual.” Prior to the reopening, the new Clayworks board added diversity and inclusion into the nonprofit’s bi-laws as reflection of their rethinking of the community they serve. In June, Clayworks invited more than 80 members of the business community to Morgan State University to discuss ways the nonprofit could consider inclusion, innovation, community, and transformation. Out of some of the hard conversations that day, Clayworks gained a new understanding of how their community is perceived, and how even the term “community” can feel exclusive to those who do not feel they are within it. 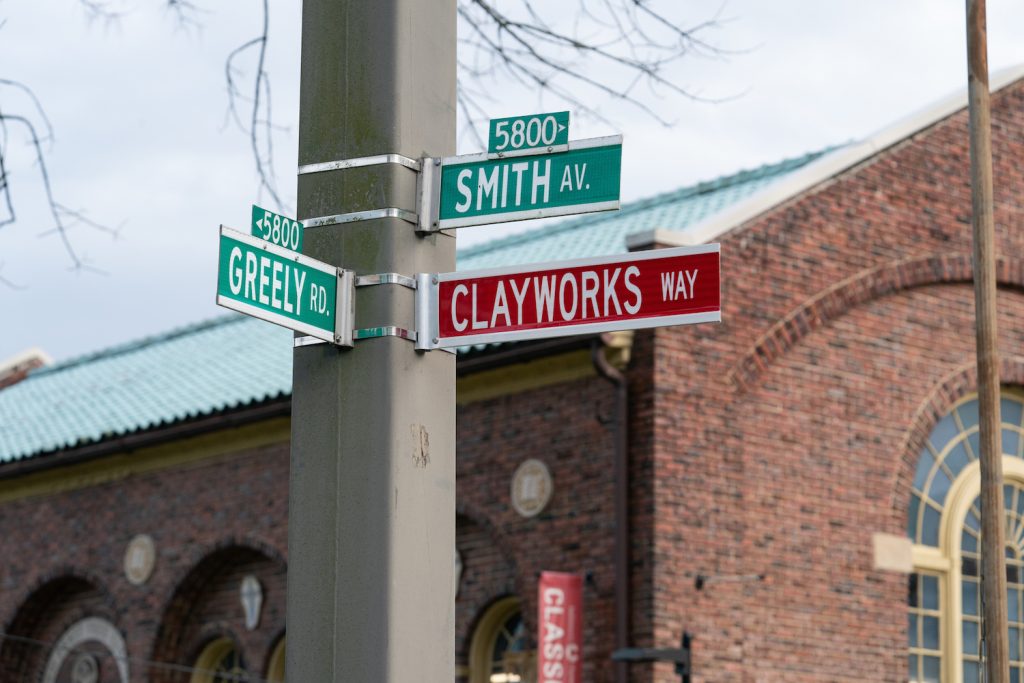 It’s a field-wide issue, this question of who has access to clay, which Patz explains has been a historically white field. Wish sees that “art and art making has its own exclusivity surrounding it; it’s a hobby that people that can afford it can envision.” Clayworks and other ceramics leaders are trying to change these perceptions and make the media more available to all.

In addition to engaging in Baltimore, Clayworks engages with is the international arts community. Exhibitions Director Mary Cloonan works with national and international artists to mount shows in the Claywork’s galleries that stay up for 5-6 weeks. Additionally, Clayworks’ long-standing Resident Artist program has been a part of Clayworks since day one, founded by 9 resident artists in 1980. Since that time, former Clayworks Resident Artists have become leaders of clay centers around the country, chairs of many university ceramic programs, and are ceramists of national reputation. Clayworks residencies have served to catapult careers of emerging artists.

I spoke with three of the current year-long Clayworks Resident Artists Hae Won Sohn, Hannah Pierce, and Wes Brown about their experiences so far. All three recent MFA grads, they hope to pursue teaching at the collegiate level as a main means of income going forward while continuing to make their own studio work. Clayworks has been extremely helpful in this regard, offering and finding them opportunities to teach adults, children and people with special needs.

Wish explains that there is a “real effort to network to find the Resident Artists paid work in their field. That’s an absolute push.” As Clayworks hosts classes all over Baltimore for special groups, veterans, people in recovery, seniors and women’s shelters, it is an opportunity for the Resident Artists that few other ceramics centers offer.

The three residents had no prior experience beyond grad school teaching and arrived at Clayworks unsure of what to expect. Wes Brown explained, “What I really like about Clayworks is I have the opportunity to make work and I have space and access to kilns that are the appropriate size and for the appropriate firings and I get to cut my teeth at teaching at the same time.” He sees himself and the other Resident Artists as “community leaders who get to bring our extensive and varied experiences and knowledge and just like dump it on students who are here.” 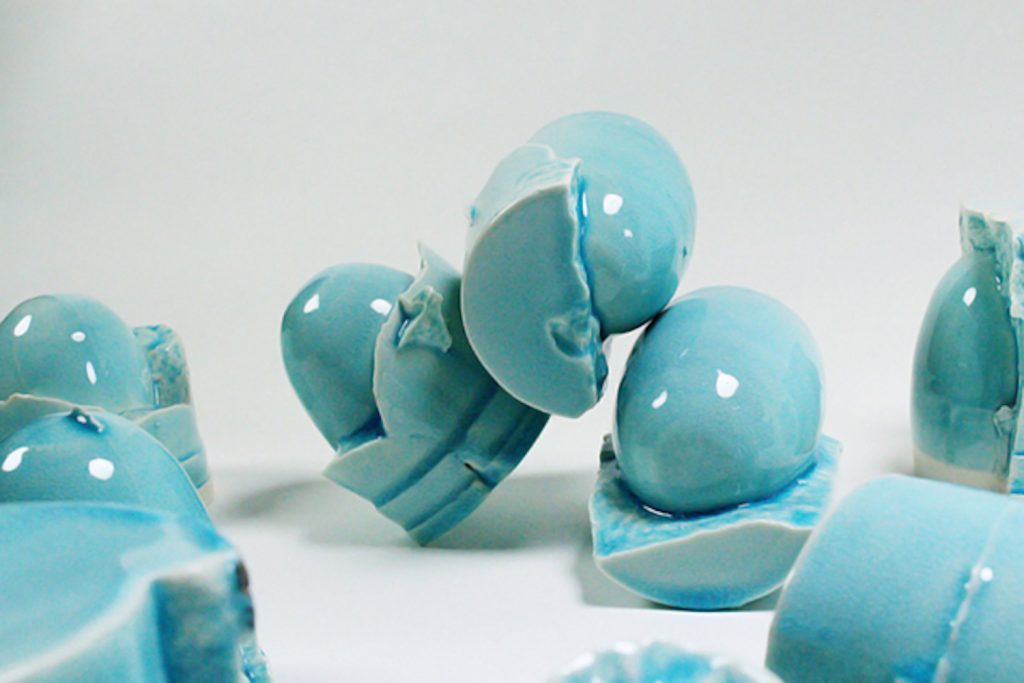 Occasionally Clayworks gets requests for commissions, Hae Won Sohn says, “It’s a place where people can reach out if they want professional products.” A citizen of South Korean, Sohn chose to come to Clayworks because of its proximity to other major East coast cities while still providing the ease of spreading out to work. Teaching at Clayworks is different than teaching elsewhere because Sohn explains “students are not just doing what I teach, in the process of making, they find their own way.”

As an arts center, Clayworks’ mainly serves people Brown describes as taking classes “because they want to and they are invested in it, because if they didn’t want to be here spending the money and the frustration and the time, they wouldn’t.”

The informal nature of Clayworks allows the Resident Artists draw from their personal experiences to connect with their students. Hannah Pierce tells her classes, “I hated ceramics when I started but once I could actually put a piece together I got more interested in painting on it and then I got into it. Getting through that first class I didn’t even want to do it.”

A scientist herself, Board President Sue Patz says of ceramic artists, “there is something patient and calm about them, they deal with failures and they look at them and see what they can learn from them and move on and continue to grow.” This slow and methodical way of reacting and working through changes and challenges is serving the new Baltimore Clayworks well. 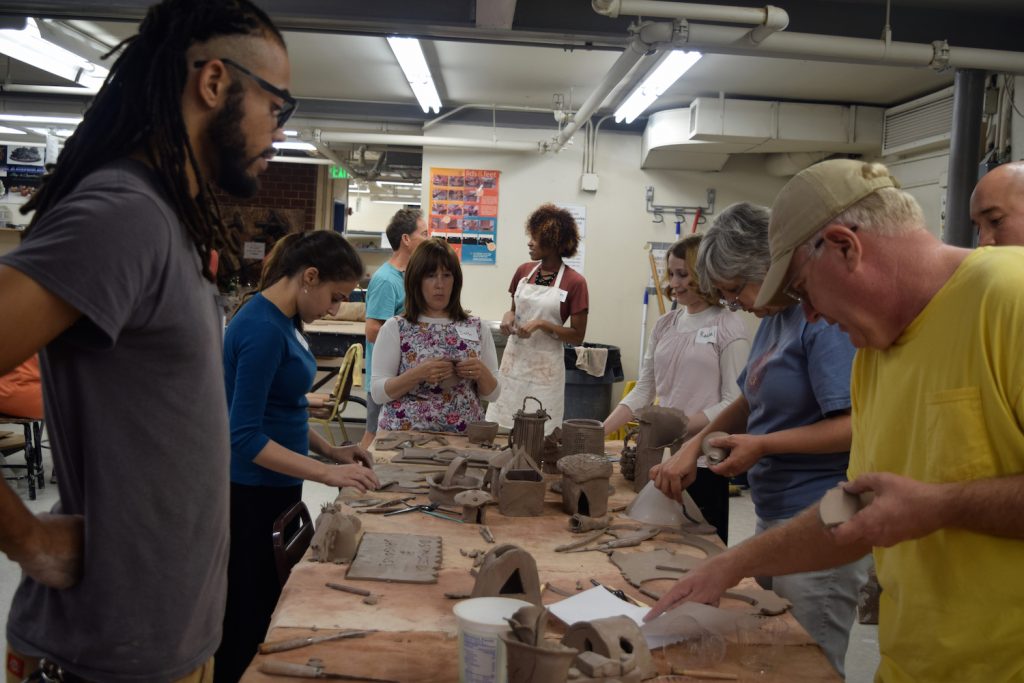 Resident Artist Cup Sale will be part of the November 17th opening. The Resident Artists are raising money to attend NCECA (National Conference for Education in the Ceramic Arts) in March 2019.