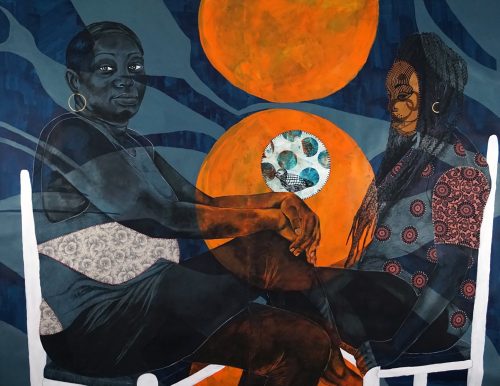 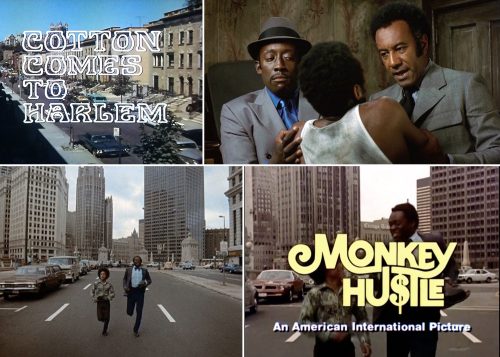 Beyond “Blaxploitation”: A Few Oft-ignored Black [...] 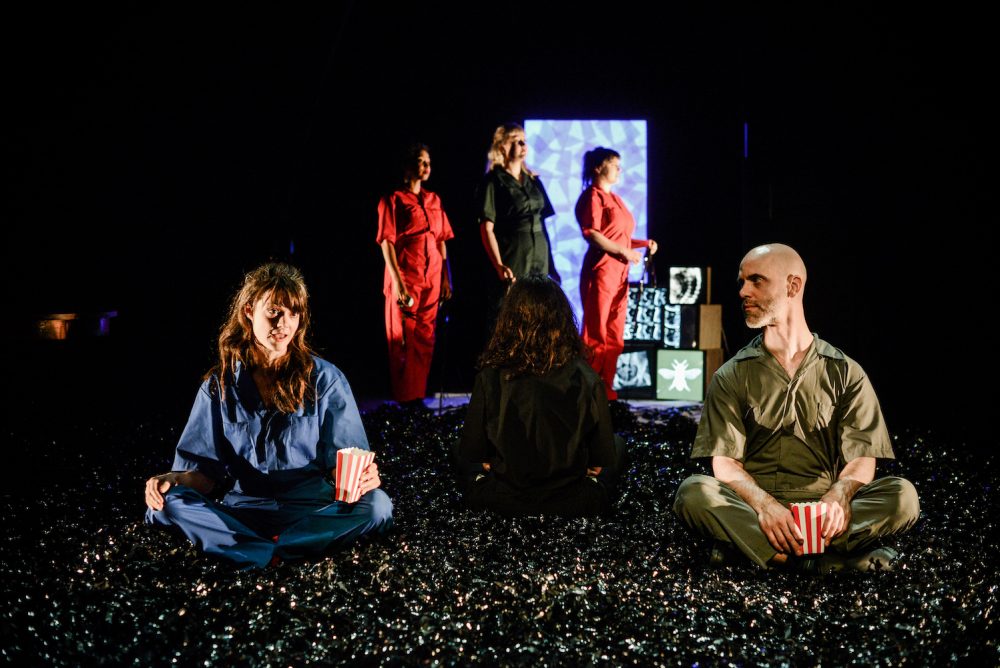 I am looking at two lone microphone stands and a floor covered with unspooled yards of VHS tapes, the shining ribbon massed and tangled as forest undergrowth. These are the raw, fertile materials of a production: amorphous, plastic, waiting to be made. I am waiting for The First Thing That Happens, a new opera by the Acme Corporation, at the Voxel theater. The words “talk to you soon” play overhead, on repeat.

Before we begin, let’s address a common stigma of opera: the notion of opera as a genre that we don’t—and might never—understand. Opera as elitist, exclusionary, prohibitive. When I think of contemporary opera, I think of Einstein on the Beach by Baltimore-born composer Phillip Glass and of waiting, with eagerness, as a radiant beam slowly descends from the ceiling to intersect with a locomotive, notes piping over one another in layers too numerous to count. What does it all mean? I am still not sure—and Glass seems content with that. When it comes to contemporary opera, I tend to prepare myself to endure, the genre’s payoffs often requiring patience.

The First Thing That Happens is decidedly more approachable, filled with humor and ready to enjoy. Lola Pierson, who wrote the text and directed the show, frequently had the audience laughing—often at the very confusion that opera (and language) might perpetuate. One of the actors, all of whom are unnamed, asks us to care while another actor quickly follows with calling the whole act bullshit. There is comedy in the juxtaposition, and we’re free to pick sides as we see fit. In the first part of the show, actors sing the phrase “the first thing that happens” over and over again in a sort of Mad Libs melody of one-liners: We are told the lights will go out, the mic will be turned on, the actors might seem serious now, but (should we be concerned) there will in fact be a joke coming. Of course, this meta-script is a joke in and of itself, Pierson literally making a production of pre-production.

A show highlighting our communal failures as humans (and laughing at them!) feels refreshing in our current cultural landscape of obsessive image-curating, auto-tuning, and self-promotion.

The opera’s main theme is communication and the ways in which language continually fails us. This theme seemed particularly appropriate for a show opening the weekend of Valentine’s Day to an audience populated, in part, by couples. On a holiday for lovers, the notion that communication is fragile seems poignant. We exchange gifts rather than the words we cannot find; we hope roses or chocolates transcend cliché; we sit close, hold hands, and pray that touch might say more than language can muster. One actor says: “I come downstage because I want to be closer to you, but it doesn’t work. Proximity doesn’t always beget intimacy. We only pretend it does.” And we laugh because to believe otherwise seems objectively foolish, and yet we so often hoist our hope on the very power of proximity. When words don’t come easily, we say, I am here for you.

Given language’s limitations, it comes as no surprise that gesture plays a significant role throughout the opera. Part I’s refrain, “The first thing that happens,” is always coupled with the same gesture: a hand wrapping around, pulling in as if gathering strength, suggesting if not the limits of language, at the very least a need for us to continuously reach for an understanding. In Part III, we hear four phrases, looping, each with its own accompanying hand movements: “Something is going to happen” (hand to the sky), “Something is happening” (hand across the body), “Something happens” (hands make parentheses in the air), and “Something happened” (hands move robotically up and down). When words fail, gesture may serve as an alternative—and the middle finger one actor gives during the performance is a gesture that leaves little room for misinterpretation. But Part III also demonstrates that words, at times, contain more recognizable nuance than action, as we can only hear the tenses of words, not see them. This is the essence of any performance: what we witness is ephemeral, subject to the passage of time. We needn’t, however, be entirely mournful of performance’s temporal nature. This scene and its repetitions are quite beautiful, with shimmering strips of VHS ribbon floating through the air like confetti, perhaps celebrating the very attempt of communication rather than its achievement.

The show’s humor is Modernist and dark. Irish playwright Samuel Beckett, frequently associated with the Theatre of the Absurd, is even cited by name. One actor in The First Thing That Happens delivers a short monologue from Beckett’s Happy Days about the heat of the sun wearing one down gradually over time. As with any form of comedy, taste must be considered, and perhaps Modernist humor—self-deprecating pessimism that flirts with nihilism—isn’t everyone’s idea of a good laugh. Some might even deem it sophomoric. But a show highlighting our communal failures as humans (and laughing at them!) feels refreshing in our current cultural landscape of obsessive image-curating, auto-tuning, and self-promotion.

Perhaps our anxieties might be alleviated if we better learn to take our imperfections in stride, medicating with laughter rather than (just) benzodiazepines. Perhaps it’s better to acknowledge up front that regardless of how carefully we might caption ourselves, our messages will be muddled. And if we’d rather not laugh at the predicament of human communication, well, we are told at the beginning of Part II that “You can either stay in your seat and keep watching or you can leave.” The regular options!, a chorus charmingly reminds us.

The score, by Baltimore experimental band Horse Lords, has a pop sensibility and seeks to make an impression. (Pitchfork said of their third album, Interventions, “It’s fluid, not angular.”) Though the music never coheres into something as solid as a song in the traditional sense of the word, there is a cadence to the score that makes you miss it when it goes silent. One realizes the effect of this music most profoundly in its absence—another commentary on the ways in which we communicate, the ways in which we fail to listen to, appreciate, or comprehend the present.

There is one final element of the show that is easy to overlook altogether, as the audience is by default trained to look toward the actors rather than at their feet. An arrangement of monitors serves as a sort of proscenium to separate the actors from the audience—a fourth wall that the actors routinely break with glee. The monitors show text, animals, origami, cartoon tornadoes of scribble, all in complement or juxtaposition to the actors and the score. Prior to Part I, the monitors display the thick colored bars—test cards—that were once used as a test signal prior to the beginning of a television broadcast. As audience, we are waiting for a signal, watching for the first thing to happen. Once the show begins, what happens is so layered that we are forced to choose what to pay attention to, what to filter out, what to hone in on. As word, lyric, line, gesture, sound, and image flood our senses, we are made to prioritize, to take in one piece of information knowing we have lost many others.

“This play is about language getting replaced by other stuff and then that stuff getting replaced by other stuff,” we are told in Part V.  If I entered the black box theater ready and willing to endure, as the opera came rushing to an end, I was desiring encore. (This a failure of language enacted, one word replaced by another.) I hadn’t prepared myself to smile so much in 45 minutes, but I found myself doing precisely that. When an actor in the show informed the audience that there were only ten minutes left in the show, I felt that same pang that comes when the bartender shouts last call—I wanted more. The First Thing That Happens ends with an ellipsis of language and gesture: “Finally we are able to…” And a hand reaches upward, toward? We are always left to fill in the blank.

The First Thing That Happens runs through March 1 at the Voxel. Photos by Britt Olsen-Ecker/courtesy of Acme Corporation