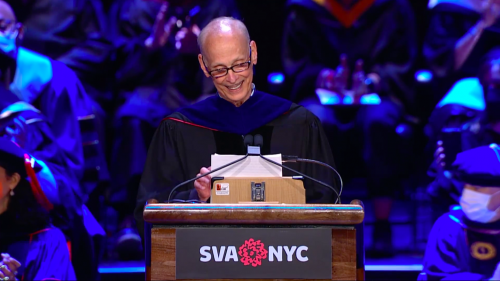 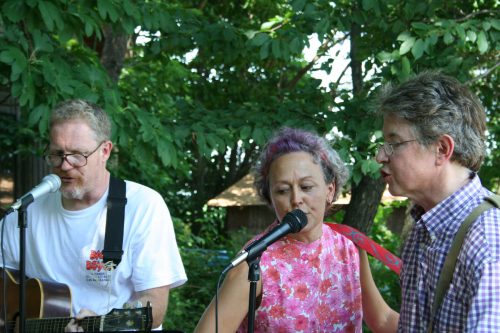 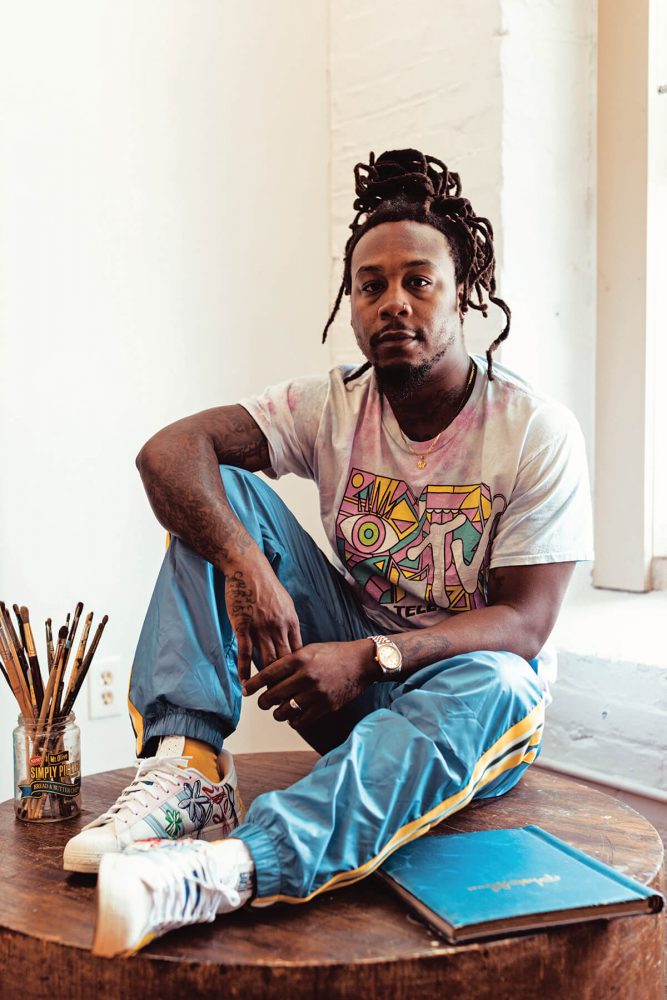 Excerpt: After dropping out of college (twice), Jerrell Gibbs worked as a home health aide while he and his wife raised their daughter in Baltimore County. For a while, he worked a day shift and a night shift simultaneously to provide for his family. During one of those night shifts, he found himself looking at a picture in his phone of his wife and daughter, and, on a whim, started sketching it—something he hadn’t done since he was a kid. Then he sent the finished drawing to his wife.

“I got it and was like, ‘Who drew this?’” Sheila Gibbs remembers, laughing. “It came to me by surprise. I was impressed. I was like, okay this could be a little something. Because we were newly married and struggling financially, I was like, ‘Why don’t you start tattooing or something, make us some more money?’”

Gibbs took his wife’s advice to heart and delved more deeply into sketching and also began designing tattoos. Noticing her husband’s growing interest, Sheila bought him an easel and art supplies the following year for Father’s Day, which furthered his new “hobby.” Not only did he begin experimenting with the practice of painting, he devoured books and other materials to learn as much as he could on the subject.

After parting ways with many of his records to fund Radio Plastique – though still retaining much of his collection – David launched the station in January.

Radio Plastique’s program offerings run the gamut, from Kim Ware’s serving of folk, country, and Americana roots on Great Big Hoping Machine, to Sean Hamilton’s post-apocalyptic vignettes on Burning Glass, to Matthew Rubbish’s deep swan dives into the realms of classic indie and goth in The New Indie Hour. Want more of the same? Peep Friday Night Feature, a show where DJs play one record in its entirety. There are also classic standbys like Democracy Now, and Essential Tremors hosted by Matthew Byars and City Paper alumnus Lee Gardener.

Excerpt: The Baltimore Museum of Art has acquired about 30 pieces and suites in an effort to diversify its collections, the museum announced Thursday.

The new acquisitions range from contemporary pieces to European, Asian, and African art to works by Baltimore artists.

The BMA said in a press release that they have committed to showcasing “works by artists who are Indigenous, part of the global diaspora, and from Baltimore.”

Excerpt: John Waters has made 16 films and written nine books. His art has been showcased in museums and he’s toured the world as a monologuist. But he’s never written a novel—until now.

Liarmouth, dubbed a “feel-bad romance,” is everything you would expect from Baltimore’s beloved Pope of Trash. It’s funny, it’s outrageous, it’s dirty, it’s wise. Waters is actually a great prose stylist—in between the jokes about fetishes and scoundrels and talking gay penises.

The novel focuses on Marsha Sprinkle, a classic Waters heroine you love to hate (and just plain love). She loathes the human condition and sees herself as above it all. Sex? Food? Defecation? Those things are for mere mortals. She subsists on fancy crackers and contempt for her fellow man. The book follows her on the lam after she and her partner-in-crime, Daryl (he of the aforementioned talking penis) are caught stealing luggage at an airport. An extended road trip filled with eccentrics, mayhem, and sexual hijinks ensues.

We chatted with Waters about his profane picaresque.

Excerpt: A partnership has grown between Baltimore Tree Trust and Baltimore Ceasefire to plant trees in honor of loved ones lost to gun violence

Four weekends a year, Baltimore Ceasefire 365 spreads the message “Nobody Kills Anybody” with the aim of stopping murders in Baltimore City. And year round, the anti-violence activism group seeks to reduce violence, affirm life and support families who have lost loved ones to violence.

The collaboration with Baltimore Tree Trust is part of paying tribute to those individuals’ memories.

One day after a mass shooting at a Fourth of July parade in a Chicago suburb, Hogan (R) announced that he had directed the Maryland State Police, which issues gun licenses in the state, to suspend what’s known as the “good and substantial reason” standard for carrying concealed weapons. Hogan’s directive means Maryland gun owners no longer have to offer a justification for carrying concealed firearms.

Excerpt: In May, not long after a leaked Supreme Court draft revealed that Roe v. Wade would likely soon be overturned, Baltimore abortion doula Carling Sothoron’s first concerns weren’t tethered to Charm City, but to patients based in other states.

After the court’s 5-4 decision officially came down on June 24—a landmark ruling that effectively removed federal abortion protection—her fears became a reality.

“Honestly, I didn’t think much about Baltimore, I thought about folks living in trigger states who would soon have to travel far out of state to get care,” Sothoron says. “With lots of clinic options, funding support, and doula care, abortion services in Baltimore and Maryland are hopeful.” Even so, she adds that “poor people, people of color, and most especially, poor people of color,” are less likely to benefit from these advantages.

Big Fish: a retiring Jayne Miller and the role of journalists in their communities
by David Nitkin
Published July 6 in Baltimore Fishbowl

Excerpt: Jayne Miller has been a continuous and vigorous presence on Baltimore television for decades, and as the chief investigative reporter for WBAL-TV, has deployed tenacity and passion to break some of the biggest stories in the region.

On July 6, WBAL announced that Miller will be retiring at the end of the month, bringing an end to one of the most noteworthy careers in regional journalism. Baltimore Fishbowl is republishing the “Big Fish” Q&A conducted with Miller earlier this year.

After a year, here’s where the Mayor’s Office of Broadband and Digital Equity stands
by Donte Kirby
Published June 30 in Technical.ly Baltimore

Excerpt: In March of 2021, Mayor Brandon Scott announced Jason Hardebeck as the director of the newly-created Mayor’s Office of Broadband and Digital Equity. The appointment and office’s creation were seen as major steps forward, as well as proof of the city’s commitment to closing the digital divide. A year and a few months later, as part of our third Racial Equity in Tech Month, we circled back to ask community stakeholders — and Hardebeck himself — how much progress the office has made.

Technical.ly chatted with Hardebeck multiple times about his vision for the office through the first 100 days of his tenure. We did a Q&A during his first month, in which he outlined goals like publishing Baltimore’s broadband and digital equity plan by summer (it was released in the fall) and making inroads with nonprofits and companies of all sizes to close the digital divide. He described how this stint with city government was different from 2015, when he served under then-Mayor Stephanie Rawlings-Blake as broadband coordinator: This time, he had a budget and the ability to effect change.

We spoke again five months later, addressing the future of broadband and digital equity in Baltimore. He explained what makes Baltimore uniquely equipped to tackle the gap in digital access and how he thinks the city can become a major player in the digital economy.

Excerpt: As you will read elsewhere in today’s edition, Maryland Matters is joining forces with States Newsroom, publisher of almost 30 websites focusing on state capitals across the country.

It’s a sweet moment — for me, for our editor Danielle Gaines, for senior reporter Bruce DePuyt, and for everyone associated with building and sustaining Maryland Matters. States Newsroom is a vital, growing organization, led by visionary journalists whom we greatly admire. Being part of their organization is truly going to enhance our ability to bring you the news.

But it’s also a bittersweet moment, because our new arrangement means we will be saying goodbye to our publisher, Margaret Thale.

A Note from the Editor
by Danielle E. Gaines
Published July 6 in Maryland Matters 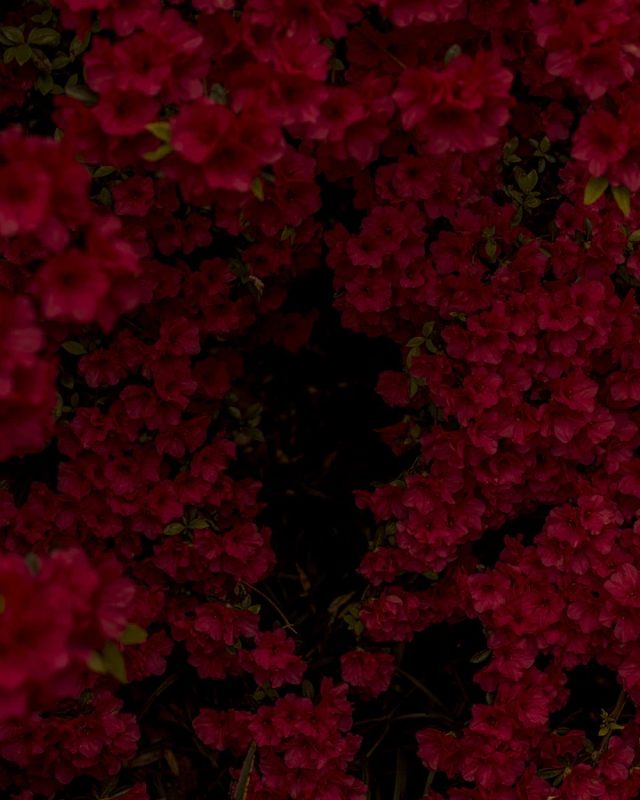