‘In Character’ at The Light Gallery by Alissa Massey

‘In Character’ at The Light Gallery by Alissa Massey 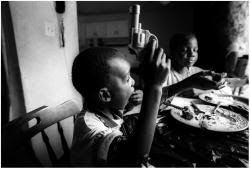 Did you ever think to view contemporary art in a church? If no, think again. There is a new gallery on Charles that is a church and a gallery. There’s even nudity, scandalous! The space is not overwhelming; it is quaint and colorful. The work on display is a show titled, “In Character,” with photo and mixed media work by Sean Scheidt and Sarah Nix. Scheidt’s work is about fashion, whereas Nix is a photo journalist, therefore the work is strikingly different. The first room is composed of Sheidt’s work then one passes through a “soon to be cafe” and enters the second room filled with Nix’s work.

The two photographs both deal with people in character (an appropriately named show). One deals with an ideal or made up world where as the other documents life as is, with people in their specific roles/jobs. The pieces of Sheidt’s that are the most compelling are the four prints with the tree trunks, the girl wrapped in twigs and another girls who has been painted. They have a narrative quality about them, with subdued colors that evoke a sense of peace. One the opposite end one the most striking images of Nix is her photo of the boy holding a gun at the kitchen table. Just an ordinary day I guess. She is able to depict the characters within her works by keeping particular elements of their surroundings while the light compliments their emotion(s).

Overall the work being displayed is captivating and rich. The work is beautiful, and is complimented by the space. There are some areas within the space that make the gallery a little awkward, like the soon-to-be cafe area. This is however, The Light’s second show, and they are still in the process of finalizing the space, but so far the artists they have chosen have benefitted by showing there.