Ryan Lauderdale: Bed, Bath, and Beyond at Nudasha [...] 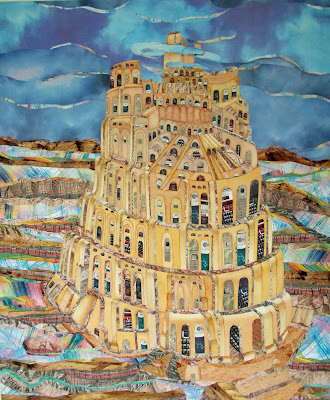 Camougraphy in Cartopolis is an exhibition of map collage encompassing camouflage, topography, cartography, geography and the digital divide.

Foer says of her work, “My artwork is map collage that offers the viewer a combination of imaginary landscapes with mystical, scientific and ecological themes. The visual description of a three-dimensional world on a flat plane is conjoined with the depiction of the metaphysical. Maps that I incorporate into collages may be part of the regional, geographic, geological or religious narratives; boundaries may have been altered in hopes of furthering certain ends. Usually there is more than one story a map can convey. My work also has more than one story to tell. I may be trying to both describe the curve of the earth on a flat piece of paper and using maps to blur the boundaries between the natural and the manufactured/ technological world, representing simultaneously land, sky, water and architecture.

“Recently my work has incorporated images of mobile and technological devices. All pervasive in our society; cell phones, GPS, and hand held computers have become part of the land or cityscape,” adds Foer. “Integrating images of these devices allows me to further explore the relationship of the natural world and the man-made world and how we, as humans, navigate those worlds. To further that end, I have made imaginary archeological sites, using images of cell phones and digital photographs as the collage material.”

Foer decided she was going to be an artist at the age of 11 when she lived in Paris for a summer and visited every museum and gallery. As a fibers student at Philadelphia College of Art (now University of the Arts) she became fascinated by the relationship between maps and the land they represent, embarking on a lifelong interest in maps and collage. After emigrating to Israel, Foer worked as a textile conservator in Haifa and Tel-Aviv and studied at the Textile Conservation Centre, Courtauld Institute in London, where she received a Post-Graduate Diploma in Textile Conservation. After returning to the U.S., Foer worked in conservation for the Textile Museum in Washington, DC, and for many museum clients as a freelance textile conservator. At the same time, she continued to create map collage landscapes with sacred, political and meta-physical significance, depicting three or more dimensions on a two-dimensional plane.

A resident of Annapolis, Foer has had her work at the Indianapolis Museum of Art, the Maryland Governor’s Mansion, and the Israeli Embassy and is in the permanent collection of the Haifa Museum of Art and the Beer-Sheva Biblical Museum. She was awarded a prize for the Encouragement of Young Artists for work exhibited in the Artist’s House in Jerusalem and received a Maryland State Arts Council grant for Individual Artists in 2008. Her web site is located at www.annafineart.com.

The exhibition will remain on display until December 15.
The Galleries at Maryland Hall are open Monday through Saturday, 10 am to 5 pm and are located on the 2nd and 3rd floors of Maryland Hall, 801 Chase Street, Annapolis. For more information, go to www.marylandhall.org.

A group of printmakers, educators, neighbors, innovators, and curators are using their platform to bring outdoor art and culture events to different neighborhoods in Baltimore City.

Copeland's collection is a reflection of the depth and width of her 30-year career in museums: contemporary art, functional works traditionally sidelined as craft, and objects of historical importance for what they remind us about where we come from.