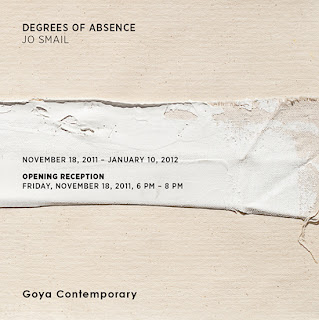 Jo Smail is a Baltimore-based, South African-born artist. Her life has thrown her several obstacles. First, a devastating studio fire and then a stroke that left her unable to walk or speak. Although she relearned speech after a year of silence, she never ceased to communicate through her visual work. Her solo show features paintings with amorphous blobs and bright, saturated colors juxtaposed on bare canvas. The meaning of the work remains open-ended, Smail’s motifs taking precedence.

The first room in her Goya Contemporary show “Degrees of Absence” houses three paintings; the largest of the three having its own wall. This larger painting, Figure In Plaid Walking a Dog, has green stripes in a plaid pattern over a dark, rounded blob – painted canvas collaged onto raw canvas striped with pink. At the top of the painting a strip of canvas is juxtaposed in a similar fashion. The problem, or perhaps the secret of this and all of Smail’s work is that the viewer may not understand why it’s all there. What governs the creation of these paintings? “Degrees of Absence” is at first spontaneous, laid-back, even blissful. Any cute feeling that the work emanates are only the first layer. Ultimately Smail’s work conveys a genuine, practiced attempt at communication with the outside world.

Stepping back from the plaid-striped painting you notice there is another canvas placed neatly at the bottom left hand corner of the painting. This is the Dog of Figure In Plaid Walking a Dog and though it is considerably smaller, its surprising placement is as loud and whimsical as its larger counterpart. You must squat down to see this baby painting as it is inches above the floor of the gallery. It is untouched canvas— except for another flat black blob edged in her pink paint, applied so thickly that it must have required something like a cardboard stencil.

Several other baby-paintings surprised me throughout the exhibition. Bird and Off float above or off to the side of their parent painting. Globs of yellow, baseball-sized balls of white paint lined up in a vertical row beside a white cut out with orange dots, smudges like lipstick, and a tiny strip of newspaper. Some of these elements were deliberate and others, we can guess, less so. It occurred to me that the work might serve as a record, billed as childlike, of scraps in the artist’s studio. More importantly, judging by many of her titles, it is her attempt to communicate not only momentary thought but also personal shortcomings. She presents to us what to her represents the inner webbings of her life and what remains to us a secret but captivating visual language.

Complete with her own grammar of strings, lines and color, Smail’s unique vernacular is so complex with its own mysterious rules and regulations that it appears ancient to us outsiders. The artist, fluent in her own elegant syntax, gives us her titles as bridges to a more absolute reading: Impure Thoughts, Sitting Upright, Winks of a Day, etc. However Smail acknowledges that her titles, many of which are humorous, are often exactly what her paintings are not. Her images are not representational so the viewer is free to make of them what they will or choose to follow the lead of the title. The mysterious open-endedness that Smail values is exactly what holds a viewers attention.

Still— A Supreme Conjunction with Probability makes me wonder to what degree chance is a factor in Smail’s work. Her decisions to sew a button here or to paste there are clearly conscious ones, but maybe that lead mark over in Speed of A Shadow Pencil happened by a chance studio accident. But Dog of Figure In Plaid Walking a Dog did not hang itself only inches above the floor by chance. Perhaps chance is occasionally how a painting is begun. As it stands probability does not measure all of her work in this exhibition and is only hinted at in marks and titles (and can we rely on the factuality her titles anyway?). I trust that the curation of the show would reflect accordingly if Smail’s art were all about chance. “Degrees of Absence” exhibits choices made by the artist to place a little canvas down near the floor, but certainly no probability or else the paintings would be flung around the gallery. Everything is hung rather conventionally. In the end I had no qualms with the curation— it reflects just the right amount of minimal decisions that are made in the work itself.

Winks of a Day

I found it curious, at first, that all of the works were conventional rectangles. All of these experiments and no explosion into sculpture. Consider the origin of the work – paintings that assumed a role in a recovery. One of those original works, titled Tongues Wag is a calligraphic list of words that Smail could not say at the time. Even the meaning of her signature pink changed from being emblematic of love to representing the silence she experienced. Perhaps Smail utilizes the rectangle in the same way that languages we are unfamiliar with are served to us in the familiar form of ink on paper. Here I began to believe that Smail makes her work for the viewer to see. As well as an effort to show them at all she puts them into a context that we do understand, even if we don’t speak her language—the rectangular canvas.

At a critical point in her recovery, Smail used art to express thoughts and feelings that she could not say out loud and now in “Degrees of Absence” her work seems to function much in the same way. Governed by emotions and thoughts that she fixates on, and to some degree chance, the paintings are immediately playful, but her work beckons the viewer closer in hopes of decoding its meaning until they are all at once seized by the seduction of the sound of her lovely and profound but intensely private language.

– Hannah Hill is a Senior at MICA

Visual Art , Issue 09: Craft
Schroeder Cherry’s Pillars of the Community
How Cherry's art practice reflects his strength as a craftsman, historian, and storyteller

Cherry’s assemblage portraits create a sense of familiarity, especially through the everyday objects and materials he incorporates as symbols for larger questions and preconceived notions of American history and culture.