A Reaction from Bret McCabe: Does Art Criticism in Baltimore Have to be Nice?

A Reaction from Bret McCabe: Does Art Criticism in Baltimore Have to be Nice? 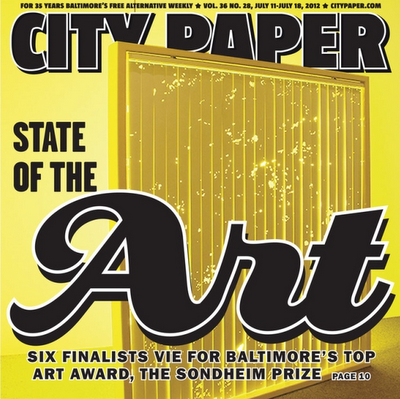 Cara: My short answer to your question: there’s too much niceness in arts criticism in general. In Baltimore that is only amplified by the tiny size of the community. (And, yes, local arts community: you are tiny. You are mighty and vital and important, but you are really, really tiny. Don’t feel bad, that’s just the way it is: the number people who pay attention to art in New York is dwarfed by the number of people who pay attention to, say, the Yankees.) There’s a long tradition of arts community solidarity here for a reason, and sometimes it’s very difficult for people to be honest to their friends about anything, much less their art.

When I first proposed and ran a Sondheim cover story however many years ago I didn’t propose the short pieces as straight reviews, as they’re typically in the 500-word range and it’s a group show thrown together by competitive happenchance, not a curator’s idea. Over the years the artists and BMA installers have become adept at occupying a series of white-walled galleries, but it’s still an exhibition organized by competitive this-and-that and not curatorial vision. I envisioned the short pieces as discussions, however writers felt like responding to that, and typically asked people to inform me which artists they wanted to write about. From there my editing process was one of me being a style curmudgeon and making sure copy held to word counts. So if you want to locate the traditional, congenial tone of Sondheim cover story coverage, I launched that ship.

Speaking only personally, I have little interest in either scolding or drama when writing about anything, unless I’m being forced to trade emails with my college loan collection agency. Calling BS on something? By all means. But I’ll admit I had to go back in the archives a bit to find something I felt so-so about (“After Image” at School 33 in 2010, Matt Porterfield in the Sondheim exhibit last year) and way back to things I really didn’t care for at all (the Contemporary Museum’s “Beautiful Losers” in 2005 and Sanford Biggers solo show in 2004), so I’m totally guilty of only confronting things I have something to say about, something I responded to enough the first time that I had to go back and figure out with a second, note-taking look.

For me, the easiest things to write are the things I love and hate, while the hardest things to write about are things I only feel meh about—which is, in all honesty, most of life. And I think the overall quality of criticism in Baltimore is directly related to a lack of consistency: the simple fact of the matter is that there is no one critic writing week in and week out about what he or she is looking at. No one person covers the visual arts for any outlet all the time, and because no one person is looking at everything and having to think about it out loud in print/on the web, the probability of a variety of opinions approaches zero. What you get is a collage of strong first impressions, which tend toward the positive. That isn’t a product of critical cowardice, it’s a byproduct of managerial fiat.

The bigger question you’re asking is if there’s an unspoken assumption that nice is the default setting assumed necessary to sustaining the arts in Baltimore, and that is a question work asking. There are a variety of things that don’t get talked about out loud here—faceless judging in certain prize processes; decision making processes at major institutions; partnerships between local businesses and local arts hubs; targeted development around artists spaces/areas; how ostensible DIY arts/studio spaces are run by building owners; how funding monies get distributed; whether or not “the arts” are having a positive economic impact in communities; the never talked about racial divide in arts communities; employment options for artists in general.

To me, those bigger discussions about the arts community and how it fits into the city’s infrastructure are just as important to have out loud, if not more so, as telling a recent BFA grad that his work is blatantly derivative in print. He’s going to find out just how weak his work is soon enough, but we may spend years and dollars following poor planning and/or if-we-build-it-tourists-will-come wishful thinking.

The strength of Baltimore’s arts community has always resided in its people, the artists, curators, advocates, and their allies who have forged their way sometimes in the utter vacuum of attention and funding. Over the years as various local/regional organizational/municipal whatevers have recognized some kinda/sorta economic something or other in what they do, new relationships and opportunities have presented themselves, and over at least the past decade we’ve been witnessing a slight convergence of Arts! Good! Development! Good! groupthink that has created some curious bedfellows. And if Baltimore’s arts community wants to transcend its sometimes split-personality—equal parts looked over step child and chip-on-its-shoulder pride—it’s going to have to confront that extreme positivity that’s kept it afloat for so long, which is going to be very had to do.

What do I want for Baltimore’s arts community? I want local artists to be able to live and work as artists in town, which to me is contingent on both individuals and institutions recognizing a value in creative labor. And, yes, more consistent sincere criticism is part of that (and—shameless self-promotion alert—I am available for hire – (actually, I really should just start the weekly blogging I’ve been meaning to launch since, like, summer began)). But an integral part of that process is all sectors of Baltimore’s arts community openly talking about how things work and if where it’s all going is an equitable way to get where everybody would like to be.