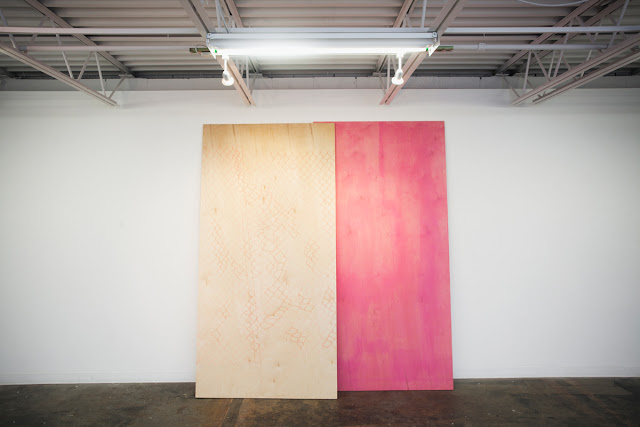 Comfort Zone features four artists that re-purpose elements of contemporary domestic life in subtle and distinct ways. By manipulating our usual associations with familiar scenes and objects, they allow us to subtly shift our position. The interior and private are not safe from intrusion; boundaries between personal and public are not fixed. Beyond all, a sense of comfort is presented as the number one goal, hung out as a proverbial carrot by which all manner of major and minor atrocities can take place. The work in this exhibition explores elements of this ceded ground, along with a variety of ways these boundaries have been crossed. Although all four artists push elements of scale and object hood, all share a willingness to veer from playfulness to formality and employ superior craft in their exploration of these tensions, each one communicating his or her own singular and idiosyncratic worldview.

Grayson Cox is an artist based in Brooklyn, New York, and a 2010 graduate of Columbia University. In the last two years, he has participated in residencies in Salzburg, Austria; Warsaw, Poland and Tel Aviv, Israel. Cox teaches at the Pratt Institute in Brookyn, NY and had his second solo show, “The Water’s Fine,” in New York in the spring of 2012, at Gasser and Grunert in Chelsea.

Ryan Hoover is an artist living and working in Baltimore, Maryland. A 2006 graduate of the Mount Royal MFA program at Maryland Institute College of Art, Ryan is a current Hamiltonian fellow in Washington, DC, where he recently exhibited a body of work there titled “Sculpting with Satellites.” In addition to maintaining his studio practice, Hoover serves as the Director of Fabrication Studios at MICA, where he also teaches in the Sculpture and Environmental Design departments.

Kim Faler lives in North Adams, Massachusetts, and is a 2008 graduate of the Cranbrook Academy of Art in sculpture. Kim was a 2008 recipient of the Joan Mitchell Foundation Grant and a 2008-09 Fulbright scholar in Brazil. She has been a resident artist at the Vermont Studio Center and the Bemis Center for Contemporary Art, and has shown work at MassMOCA and the DeCordova Biennial in 2012.

Chloe Watson was born in 1984 and grew up in Virginia. She graduated with an MFA in interdisciplinary studio art from the Maryland Institute College of Art in 2010. Chloe currently lives in Farmington, Maine with her husband, artist Jason Irla, and teaches at the University of Maine-Farmington.

Lou Joseph is an artist working in Baltimore, Maryland since 2008. A 2004 MFA graduate of Indiana University in printmaking, Lou has been a resident artist in Venice, Rotterdam and Antwerp. He is a founding member and director of the Institute of Contemporary Art, Baltimore, which is dedicated to emerging artist retrospectives of Mid-Atlantic and national artists.

Rod Malin, Director and Founder of Guest Spot, is pleased to announce that Guest Spot is moving to a new location at THE REINSTITUTE school for innovation and self accreditation for the Arts and Sciences. The REINSTITUTE, a new initiative directed by Mr. Malin, is in the heart of Baltimore’s Station North Arts and Entertainment District and will host Guest Spot’s next opening, Comfort Zone, curated by Lou Joseph on August 31th.

The REINSTITUTE will officially open its educational programing in Winter 2013. The program will seek to nurture existing arts communities and grant the opportunity for innovation-oriented individuals to self-accredit through individualist exchange. The REINSTITUTE’s purpose is to address Artists and a like individualistic need for scholarly intervention, to challenge University’s practice of accreditation, conformity and critique of historic preserve. The school will challenge traditional infrastructure by merely acting as an institution that is integrated into the environment of its individual members, rather than creating a communal vacuum of learning that creates infrastructural upset. This would be achieved by keeping admittance to few and working/collaborating with in their existing practice while running programs, lectures, workshops and exhibitions with participation included by the active arts community. Further info at: www.guestspot.org or contact rodmalin@guestspot.org