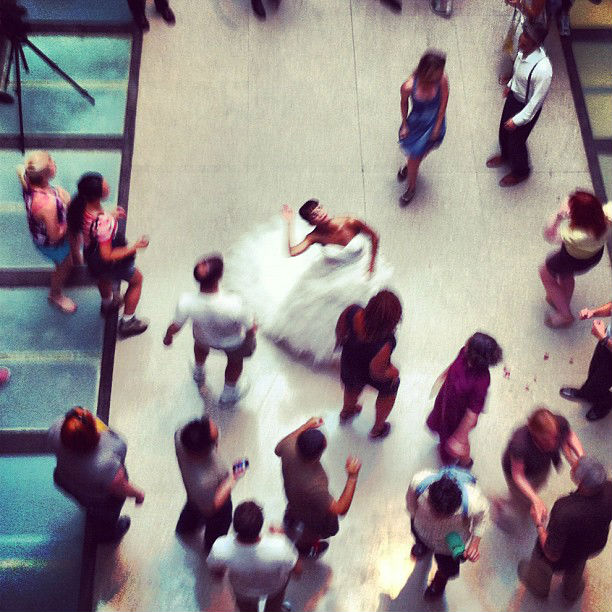 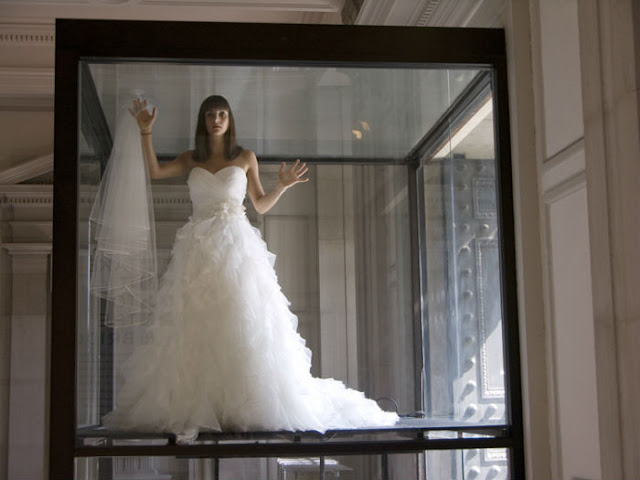 Seven Weddings for One Bride:  Save the Date, a provocative performance by D.C.-based Kathryn Cornelius, examines the institution and spectacle of marriage—and divorce.
by Cara Ober

The bride is radiant as she dances with her new husband. The wedding reception, held at the elegant Corcoran Gallery of Art in Washington, D.C., is a serious party, and all the guests dance enthusiastically to old-school wedding favorites like “The Electric Slide” and “The Hokey Pokey.” But wait—there is trouble in paradise. During Kool & The Gang’s “Celebration,” the couple has an argument but come back together for a slow dance. As Axl Rose croons, “Nothin’ lasts forever, and we both know hearts can change,” the bride begins to cry and the groom shakes his head sadly.

“I can’t do this anymore! I feel like I don’t even know who you are!” shouts the bride.

“I want a divorce!” The bride is insistent. The couple walks, separately, up to the divorce lawyer’s table and answers a series of questions. The judge says that everything with a beginning has an end. “In the name of art, you are now divorced,” he announces. “This marriage is now null and void.”

Fifteen minutes later, the bride was outside in the sun, smiling and blushing, ready for her next wedding on the white marble steps of the museum. The next groom is female, and she presents the bride, performance artist Kathryn Cornelius, with a bouquet of flowers as a cellist begins to play the wedding march. 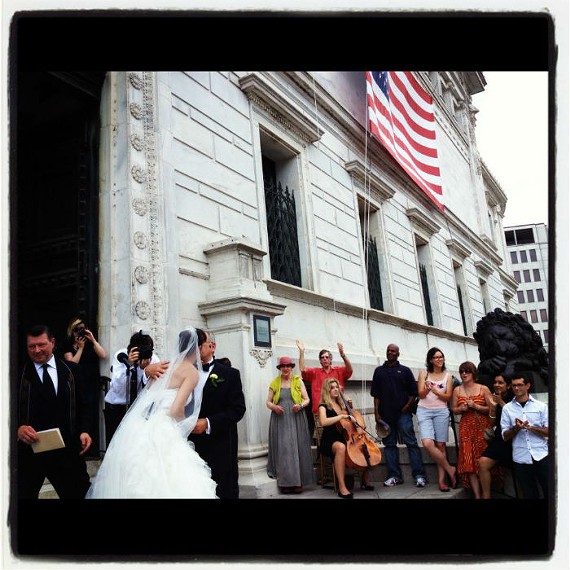 The couple strides up the steps and give their wedding vows. After being declared “wife and wife,” they share a first kiss to a round of applause, cheers, and even tearful nose blowing from friends, family, and random onlookers. The newly married couple enters the Corcoran and stand inside a glass box, a performance space called “The Bridge,” presumably because it is a liminal space between the entrance and the museum. The box has been transformed to look like a giant wedding cake, and the new couple can be viewed from all sides, like a life-sized cake topper. Then the reception begins inside the museum, complete with a seven-tiered wedding cake, toast, bouquet, and garter toss, and first dance.

The performance piece, titled Save the Date, is an original creation by Kathryn Cornelius, a Washington, D.C.-based artist, and was performed on August 11, 2012, from 10 a.m. to 5 p.m. The wedding and reception repeated itself every hour, seven times with seven different grooms. As the copious photos on Facebook, Twitter, and other forms of social media attest, Cornelius’ hasty successions of weddings and divorces were well-attended and celebrated events that exceeded her expectations for audience enthusiasm and participation. 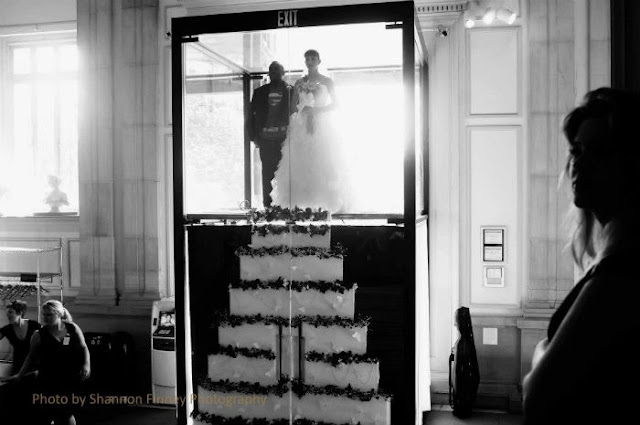 Unlike a play or other scripted performance, Cornelius didn’t hire actors to perform with her. Instead, she used a variety of social media to solicit wedding proposals and chose six suitors. The seventh, Eames Armstrong, was chosen by Facebook votes. The event is part of Take it to the Bridge, a performance art series sponsored by The Washington Project for the Arts and The Corcoran Gallery of Art. The artist is commercially represented by The Curator’s Office in Washington, D.C.

When she met the seven suitors for seven first dates, all about a week before the wedding, Cornelius asked them about their past romances and breakups and gave them assignments: pick out a bouquet, cake flavor, first dance, and personal break-up lines. “I’m going to be nervous,” she told them. “It’s OK to be nervous together. We’re in a performance, a wedding spectacle, together, and to get through it, we need to see ourselves together, in the eye of the storm. Everything else can just fall away.”

Rather than acting a pre-determined part, Cornelius attempted to bring her own emotions to the moment and to respond to the unique energy of each groom. “Some of them were really cool, some jittery, and some were surprisingly romantic … I actually think, for the performance to be successful, it had to work in ways I couldn’t have predicted or planned.” This way, the ceremony would come off as authentic and the audience could respond accordingly.

Although the current political backdrop is ripe for a bold statement on contemporary marriage, Cornelius admits that she still feels undecided about marriage—for society and her own future. “People get hung up around the legal aspects of the performance,” she admits. “But my goal was call the institution into question: What is the use of marriage in contemporary society? For lots of people, it boils down to a piece of paper that recognizes a couple in union, having certain state privileges, which ripple out into societal norms.” 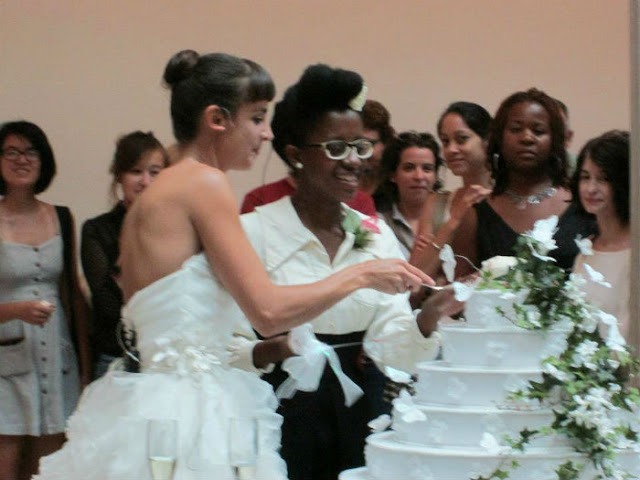 Cornelius did have official marriage certificates printed out for each groom, but none of the paperwork in Save the Date was legally binding. In her other performance work, Cornelius tends to put herself in absurd situations and often employs repetitive acts as a catalyst for conversations about societal conventions. “Much of my work in general involves repetition,” she explains. “The people who were there and watched all seven marriages and seven divorces experienced a roller coaster of emotion. Most of them focused on the marriage side of the piece, rather than the divorce, which mirrors our society. We don’t really talk about divorce much, even though sometimes it is the mature thing to do.” Cornelius wrote similar scripts for the wedding officiant and the divorce lawyer to read, so that each wedding and divorce “ceremony” mirrored the other.

There were a number of surprising “art-imitates-life” moments during the preparation leading up to and the actual performance, including the ridiculously high price for the wedding dress the artist paid, as well as the growth of the event from a small ceremony to a huge, inclusive party. Like a real wedding, the bride did all of the preparation, and her family played a large part. Cornelius’ family attended all the ceremonies, and her mother baked the wedding cake and cupcakes. Another surprise for Cornelius was that four out of seven mothers-of-the-groom were present at the ceremonies, including one mom who rearranged travel plans to attend. Other responses that Cornelius didn’t expect were tweets from audience members who excitedly announced their first opportunity to attend a gay or biracial wedding.

“I’m not trying to put forth a certain agenda about marriage and divorce,” says Cornelius. “I didn’t craft a statement and then act it out. I don’t know what I know about these things, and I am not here to tell you what to think or feel. People might think that I am making light of a serious subject, but I am deadly, deadly serious.

“My goal as an artist is to create situations to experience something we think we know already in a new way. The ‘real world’ is really my studio. I’m constantly wondering if there is a way that I can get people to see their world in a different way or get them to move and feel in a different way.

“It was interesting to stand on top of a cake, be a living sculpture,” muses the artist, after the fact. “We had to look like the object we were—the institution was up for inspection in that moment.”