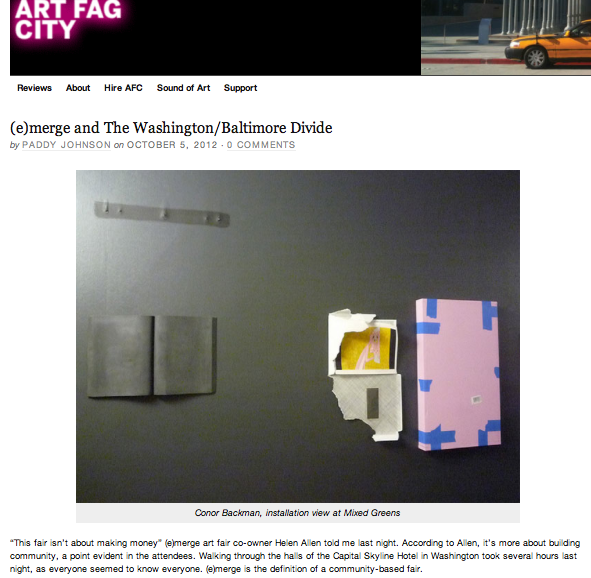 Sometimes it takes an outside perspective to point out the obvious. We might be just an hour away by train, but DC and Baltimore exist on opposite ends of the cultural spectrum. It’s not just a radical difference in median household income, real estate prices, federal government dollars, and high income employment opportunities vs. Baltimore’s ‘meds and eds,’ generating a more moderate income. In general, DC’s art scene is much more conservative than Baltimore’s, but for years has been significantly better funded. You can’t buy a freakin’ burrito in Baltimore without running into an artist, or almost running them over on their bicycle, but these folks aren’t art buyers or funders. All of this has its plusses and minuses for both sides.

At this point, I’ve lived here so long, and worked with DC galleries for close to ten years, so I guess I take the great divide for granted. These two worlds are separate and unequal, in almost every way. After a brief phone conversation with Paddy Johnson yesterday, I found myself re-puzzling the Baltimore-DC conundrum.

Like many of you, I think the (e)merge art fair is a great opportunity for artists in the region, and I’d like to be as supportive of the event as I can. I know a number of Baltimore artists participating in the fair and a lot of artists who are excited to attend. There is a certain amount of relevance that comes with an international art fair and the collective energy and connections generated is invaluable.

I have to admit, though, it never occurred to me to even wonder why so few Baltimore galleries are participating in this year’s fair. As Johnson pointed out, the only official entities in the fair are Goya Contemporary and MICA. Under the umbrella of ’emerging art,’ I think MICA can justify participation for professional development grounds.

I am terrible off the cuff, and my initial response, quoted in Johnson’s article, (e)merge and the Washington/ Baltimore Divide, is rather simplistic. What I told her is it’s a matter of economics. In order to participate in a commercial art fair, no matter how inclusive it is of emerging artists, you need funds. You need commercial galleries. Sadly, Baltimore doesn’t have a lot of either right now.

Don’t get me wrong – Baltimore is a town chock full of artists and boasts a number of artist-run, DIY spaces, but financial support and collecting art is not a part of the culture.

I’m not sure if this is negative, positive, or neutral, just that it is. Young artists choose to live here in Baltimore because the studio rent is cheap and MICA churns out hundreds of well-trained, talented artists each year. In Baltimore, young artists make the rules. On any given weekend there are dozens of  edgy, smart, well-curated exhibits to see in warehouses and even apartments, but commercial galleries seem less and less relevant to the local community.

I’m not sure if this is a loss for Baltimore artists or a gain, or neither. At this point, Baltimore is a lively and authentic place to be an artist. Though it messy and amateurish, compared with much of the strictly hierarchical blue chip art world, Baltimore’s artists are fiercely independent and charmingly surly. It’s provincial, but isn’t every unique place?

Maybe we’re doing this backwards, or maybe, quite possibly, Baltimore’s constantly emerging, underfunded, decentralized approach to art-making and exhibiting is a clear indicator of where contemporary art is going.