From Artist to Curator: An Interview with Maxine [...] 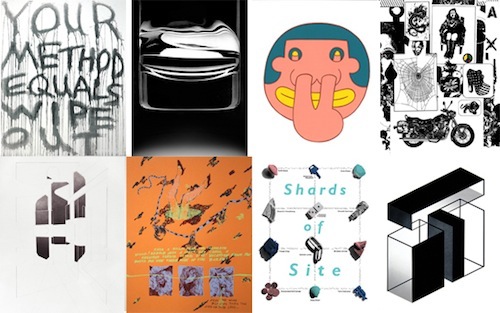 Print/Collect is an ongoing arts project organized by Jennifer Coster, primarily funded by a $10,000 “Launch Artists in Baltimore” grant awarded to recent MICA alumni by the college.  Its inaugural iteration had its debut earlier this July and takes 3 forms:  a folio edition of prints by Baltimore-based emerging artists, a catalog reproduction of these works with complementing essays by local artists and writers, and an exhibition of the work currently on-view at Current Gallery through August 25th.  Here, Jennifer and I discuss the genesis of her idea, the practical complexities of developing it, and the future of Print/Collect.

IMD:  Before being awarded the MICA LAB grant, your original idea for Print/Collect was much smaller in scope; a photocopy-quality ‘zine.  Once you had that larger budget available, how did you arrive at this model, and was it difficult to manage the potential and the scope that this budget allows?

JC:  After I received the LAB grant, I took several months to explore different options of publishing to determine the best format for the project.  I knew that I wanted to create a publication that was collectable that embodied some of the energy that is present in the art scene in Baltimore.  I wanted to keep an open mind of all the possible paths that the project could take, from a widely available and distributable ‘zine format, to handcrafted artist books. I also thought about posters, limited edition prints, and other multiples.  I was inspired by a number of affordable art collection projects in other cities that were running on a CSA model to deliver a sample of original works to a wider audience.

I talked to people in the community who had been involved in various print projects to collect insight and practical considerations from their experiences. These initial interviews helped me prepare for logistical issues, for example, one thing I heard over and over was to consider making the project yearly, rather than quarterly, due to the amount of time and coordination needed to put a project together. This was great advice. There are a lot of stages of production in a project of this scale; coordinating with artists and writers, sourcing materials, and preparing for the show. I worked on various aspects of this project consistently for a year.

I spent a lot of time looking at other print projects from all over, and spending my own (non-LAB grant) money purchasing art to better understand the experience of collecting on an affordable budget. Looking at a range of projects, it became clear that quality was the top criteria in a successful project, and that it triumphed over quantity. I ended up shrinking the scope of the project from 12 artists to 8 in order to provide the best resources. I was also able to procure a donation of paper from Canson and Red River paper companies. The screenprints and lithographs are printed on Rives BFK, and the digital prints are on Red River’s Aurora paper.  The paper quality is tops, and without the donation, I wouldn’t have had the funds to produce the print portfolio and the catalog, I would have had to choose between the two formats. IMD:  Print/Collect assembles a total of sixteen different artists and writers who work across a wide range of styles and mediums.  In some cases, the artwork and essays seem like a natural fit within the known work of the participants; but elsewhere their contribution is more of a departure.  What was your process for inviting each of these artists and in curating/editing the final collection of work?

JC:  I was interested in working with a range of artists in Baltimore who were working in different mediums and styles to provide a survey of the city’s artists. I went on studio visits to talk to artists about the goals of the project. I talked to some of the artist-run spaces about artists who they have worked with who might be a good fit for the project.  The first edition of the project was an invitational format, rather than a nomination, call for entry, or jury process, due to the logistics of printing and developing a start-up.  Roughly half the artists have a strong background in print, while half work in other mediums.

I gave the artists a lot of freedom in designing their print. The only stipulation was that it had to be 16”x20.”  I asked to see a sketch before I handed out the paper to produce the work.  I put a lot of trust in the artists, and they really followed through and created great prints.

For the catalog, I asked the artists if they had someone who they wished to do their interview with, or if I should pair them with a local critic. Many of the artists asked one of their peers to do the interview, which is why so many artists were cast into the role of critic for this project.  I’m interested in documenting artists in conversation and think that these pairings showed a great level of intimacy and consideration.

IMD:  One of your stated goals for the project is to promote accessibility for this artwork, both within the local community and nationally (if not beyond).  How do you see the different presentation formats working towards that goal?

JC:  The catalog and folio complement one another in content and provide a few levels of  accessibility.  For $5 you could take home a catalog on the opening night of the exhibition.  Five dollars is the classic show price, and if you are out for the evening you can afford a catalog.  The folio is priced at $200, which is a steal for a set of eight limited edition prints.  If you have a job you can afford to buy a folio.  It is priced so that the creative community can have access to the art of their peers.  Or for people who enjoy going to museums and are interested in owning contemporary art but who don’t have an entry point.  The classic example of proletariat art collectors are Herb and Dorothy Vogel who amassed one of the most important collections of Minimal and Conceptual Art on the salary of a postal worker and a librarian.

For a seasoned collector, the folio & catalog is a publication to become acquainted with a set of artists, and to discover additional works of interest.  The third price tier would be to invest in the pricier original works that the artists are making in their practice.  The catalog has images of some of these works, and the project’s website also links to the artists’ individual sites to direct collectors to additional works. With these tiers, the catalog, the folio and the work beyond the folio, the project is accessible to a wide range of economics and interests.

The project is also physically accessible.  The print format can easily be taken to events in other cities, art fairs, exhibitions, bookstores, and of course it is also available online. IMD:  You’ve mentioned that you were inspired by projects in other cities where local art is distributed based on a model similar to Community-Supported Agriculture (CSAs or Co-ops).  The standard model for this, with produce, is membership-driven.  How do you see Print/Collect functioning relative to these other projects, and could you discuss the potential you see in developing a community of collectors through these types of programs?

JC:  Yes, I was interested in trying out this CSA model in Baltimore.  It’s a growing trend with projects in Chicago, San Francisco, Pittsburgh, Philidelphia, Minneapolis, Brooklyn and more.  The NYTimes ran an article on it this month (‘Buy Local’ Gets Creative).  In agriculture, a member buys a share of a farm in exchange for fresh locally sourced produce.  What these Community Supported Art groups are doing is providing access to the output of the city’s artists to a clientele of art admirers by providing a sample of multiples from a selection of artists.

These models serve to connect communities. There is a healthy desire to support local community, people want to eat fresh produce and support their local farms, just as they want to hang original works of art and support artists.  These models provide access.  Each of these projects sets up their collection a little differently, and I chose to focus on having the output be print based, while inviting artists who work in a range of mediums to create prints. Often these art CSAs will announce the list of artists in the project in advance, and not reveal the actual works until after selling memberships, similar to the weekly surprise in picking up your vegetables from a traditional CSA. This is something that I may consider in later issues, but for the inaugural release we went with a traditional gallery exhibition.  Ultimately, the Print/Collect folio was developed with the goal of offering an affordable, high-quality collection of work representative of  Baltimore’s artist community.

IMD:  What has the response been to this first edition of the project and how do you plan to move forward from here?  Moreover, are you considering any ideas on how to tweak the format that you’d like to share?

JC:  I’ve gotten an overwhelmingly positive response about the quality of the prints and the catalog, which is a testament to the talents of the artists and writers and the work they put into the project.  After the show at Current, the project will be displayed in DC this fall at the (e)merge art fair.  The format of the project fits well into a print fair/art fair model, and my current goals are to travel with the project, build connections, and grow the project’s audience. In the long run, I plan to repeat the project as an annual or biennial publication.  The size of the prints, editions, or number of artists could be tweaked in the next edition.  However, the accessibility of the work and the promotion of emerging artists will continue to be the project’s goal.

The Print/Collect exhibition is currently on-view at Current Gallery through Sunday, August 25th.  For more information about the project, artists and purchase of the catalog and folio, visit http://printcollect.net/

*Author Ian MacLean Davis is a Baltimore-based artist and instructor.