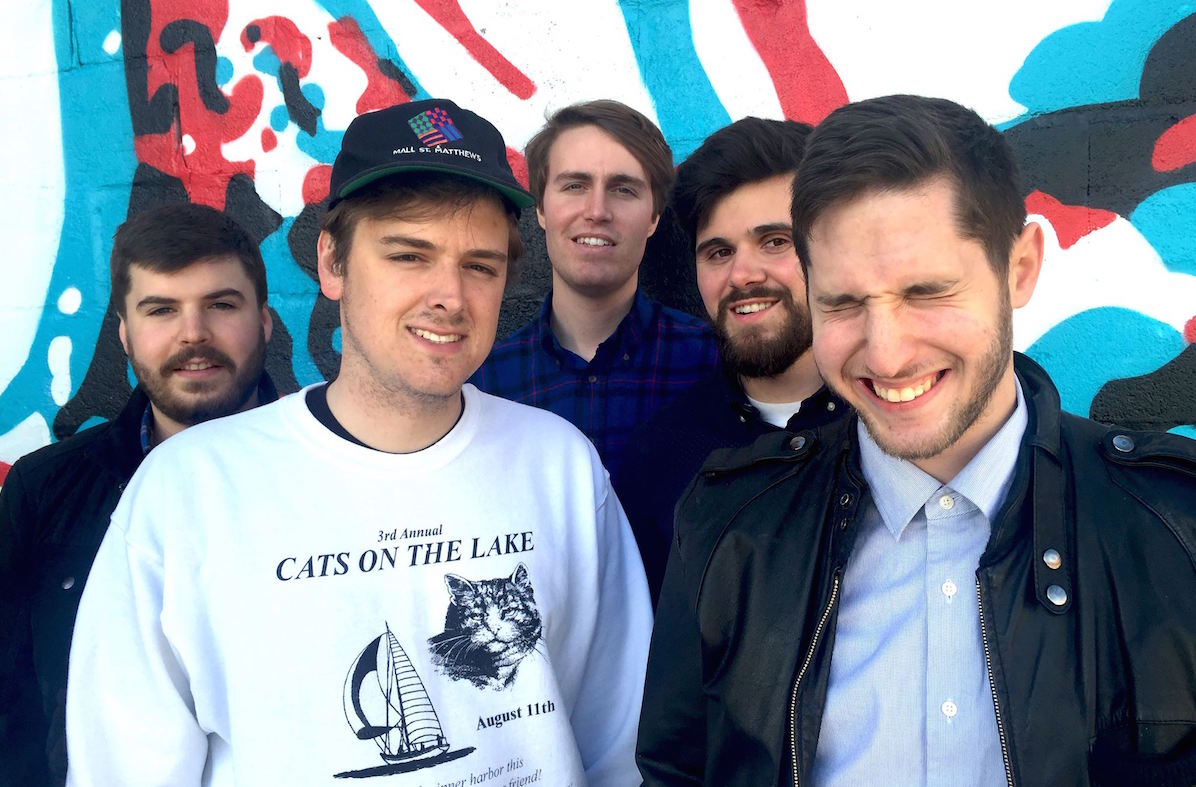 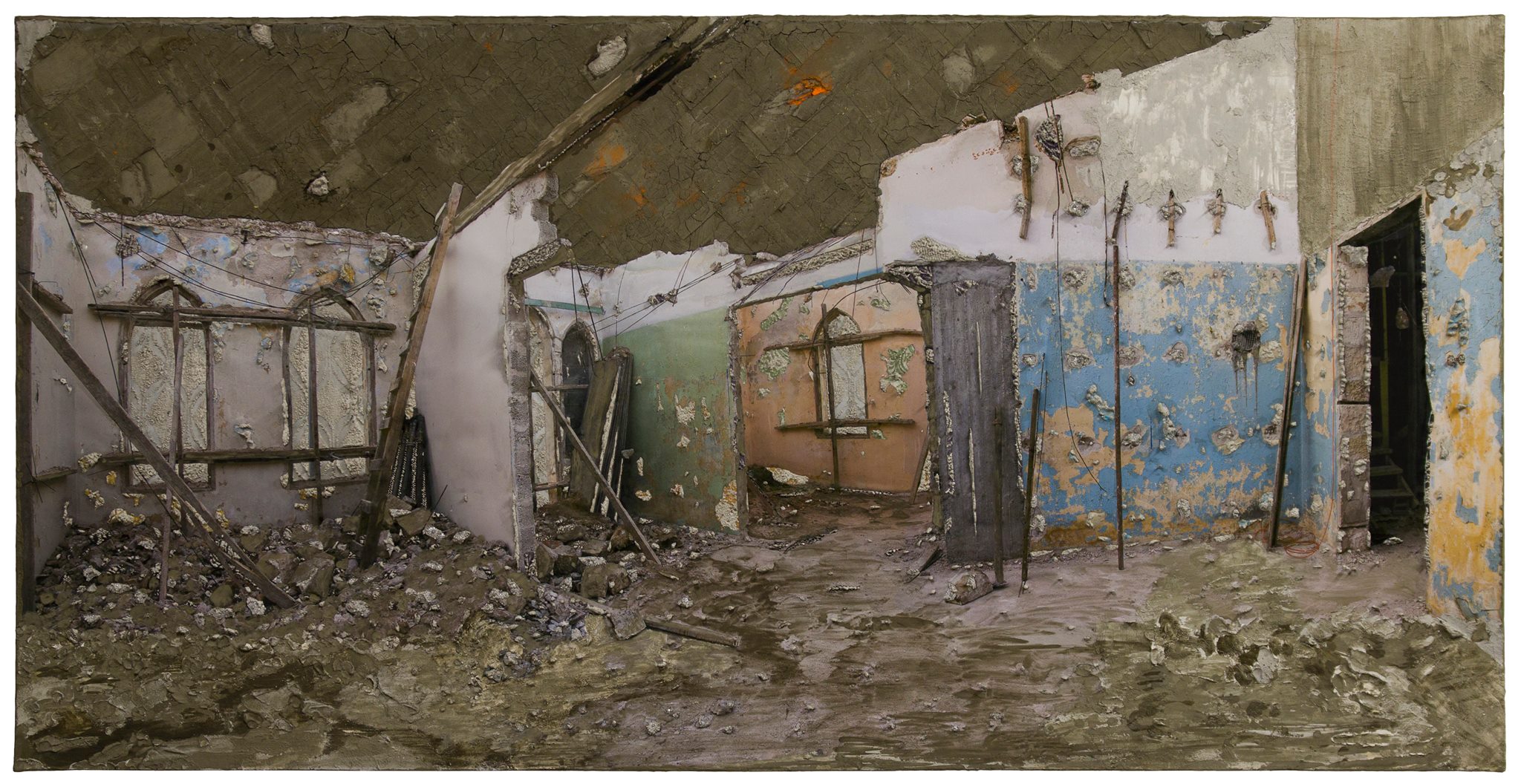 Performance: Music, Theater, & Dance
Whose Culture is Not Your Friend? 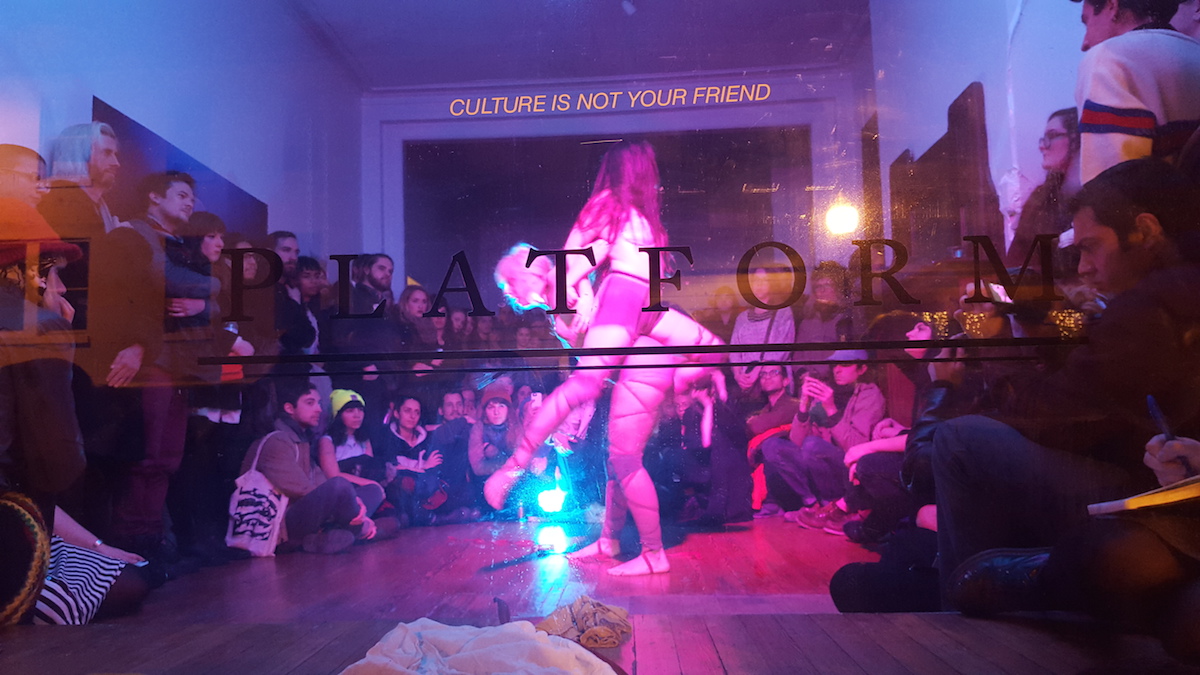 Angela N. Carroll on FlucT’s performance Culture is Not Your Friend at Platform Gallery

Platform Gallery, a small commercial gallery space in the Platform Arts Center on Mulberry Street, was filled to capacity with students and curious art patrons waiting to experience FlucT, the performance duo made up of Sigrid Lauren and Monica Mirabile. Culture is Not Your Friend, an original piece performed by Lauren and Mirabile, employs repetition, movie scores, and choreography familiarized by popular culture to offer a generalized critique and analysis of the ways in which culture informs identity.

I was one of the masses squeezed against PAC’s walls in anticipation of the show. Before the hoards arrived, the sparse gallery space allowed voyeurs access to an installation of videos, photographs from past performances, and a framed image of two soiled pairs of underwear. FlucT experiments are jarring, sharp movements occasionally segued by narratives ripped from classic films and hyper-dub/futurist or hip hop scores. FlucT works activate archetypes and formulas of popular culture, and their live and documented performances are becoming increasingly popular in performance art spaces.

For their Baltimore performance, FlucT were late and as the crowd sighed, smoked cigarettes on the gallery stoop, and mulled around the tight interior, I observed the patrons and wondered how a conversation about culture would happen in a space that was not, at that moment, reflective of Baltimore’s cultural diversity. These musings are becoming more and more prevalent for me as Baltimore’s landscape and demographics shift and those changes are reflected or not reflected at community art events and exhibitions. We are all familiar with the sore point keywords: gentrification, redlining, privilege, power, property, ownership.

LabBodies curatorial note contextualized FlucTs work as a response to historical trends of patriarchal representations of women and consumption by empowered, privileged bodies. In interviews with FlucT, the artists reveal that their work is influenced by myriad sources, but women and sexuality are primary points of inquiry. I should note that FlucT collaborators are white women. Additional FlucT performances that feature more than Lauren or Mirabile also feature white women or those whose racial identity is immediately read as white. I hoped this decision was a conscious orchestration meant to comment on race as a significant contributor to cultural formations and the semiotics of gender, race, and sexuality conveyed in popular culture.

The performers arrive. Lights dim. The space left by the clearing of bodies became a stage. Blue-purple neon flood lights turn on in the center of the space. We, the audience, sit and stand around the small clearing and wait. Culture is Not Your Friend was an 11 minute cacophony of seizing gesture, grunts, humping, tearing of nylon, and mimed sexual acts. A spectacle of familiar and repetitive gestures and soundscapes culled from popular culture. Rihanna and Beyonce. Isabella Rossellini. Commercials. The music and images Americans and the world consume. Something about the FlucT performance reminded me of cheerleader routines performed during halftime at high school football games, an inconsequential millennial exposé. Miley Cyrus post Disney. Selfie sticks.

Much of what I experienced was performative in the most mundane and expected ways: a critique of sexuality by embodying overtly sexed archetypes. But maybe that’s the point. Popular culture is blunt, overwhelmingly sexual, and inherently superficial, presumably to be accessible to broad audiences. The permeable groupthink mentality of the mob craves Drake not DuBois; music with bubbly bass lines, nonsensical lyrics and lots of repetition. The visual currency of popular culture is similarly flat, showcasing images that titillate and evoke immediate emotional and physical responses.

In FlucTs reimagined popular culture, women’s bodies are puppets and willing participants in the desire making machine of popular culture, a destructive ever present redundancy. The song you have been humming for weeks, played every hour on the hour. FlucT channels the abject. Performers smile while unraveling the red lace wrapped around their legs. The lace becomes a gag. While one sits on hands and knees, the other pushes the formers head to suckle at her breasts, an exaggerated pantomime of extreme pop icon performances. Culture is Not Your Friend presented a virtual disembodied violence. The body performs and ruptures and spins until it collapses, gathers itself and continues its routine. Robotic body movement, semantics negotiated by privileged bodies. The choice to focus solely on white women limits and oversimplifies a conversation about the nuanced and devastating impact of popular culture on Other women’s identity formations.

FlucT performances decontextualize and rebrand raced sexual signifiers as symbols of a generalized popular culture. Their performances aren’t about race, but they are. The readable components of FlucT’s choreography, when rendered through clearly articulated movements and not just spasms, stem from performances popularized by bodies of color, twerking and winding nuances found in dirty south clubs and dancehalls.

Why does this matter? The violence that happens to those bodies is real and is unabashedly channeled and championed in movements like Black Lives Matter, and others like it around the world. Those omitted bodies sit sprinkling the margins of gallery spaces. Those bodies are absent from the performances but very active in the production of popular culture.

When those bodies get dismantled, unhinged, what replaces them? Which spaces display the remains? For whose pleasure is the appropriation performed?

Culture is Not Your Friend never engages the primary bodies producing the aspects of popular culture the performers opted to utilize, and this omission flattens the impact of the work. The weight of it all, the proximity of guilt and privilege is easier to comprehend at arms-length, through performance in white spaces, to white audiences, using black music as a placeholder for the discussions no one wants to have.