Flags are abstractions, symbolic design objects representative of nations and institutions, used to show support for or dissent from one’s country. In Waving and Wavering: Contemporary Artist Flags curated by Alexander Jarman at Maryland Art Place, there are two representations of the American flag. Both are rendered as deconstructions, a fact that points to the complicated moment in American history in which we find ourselves. 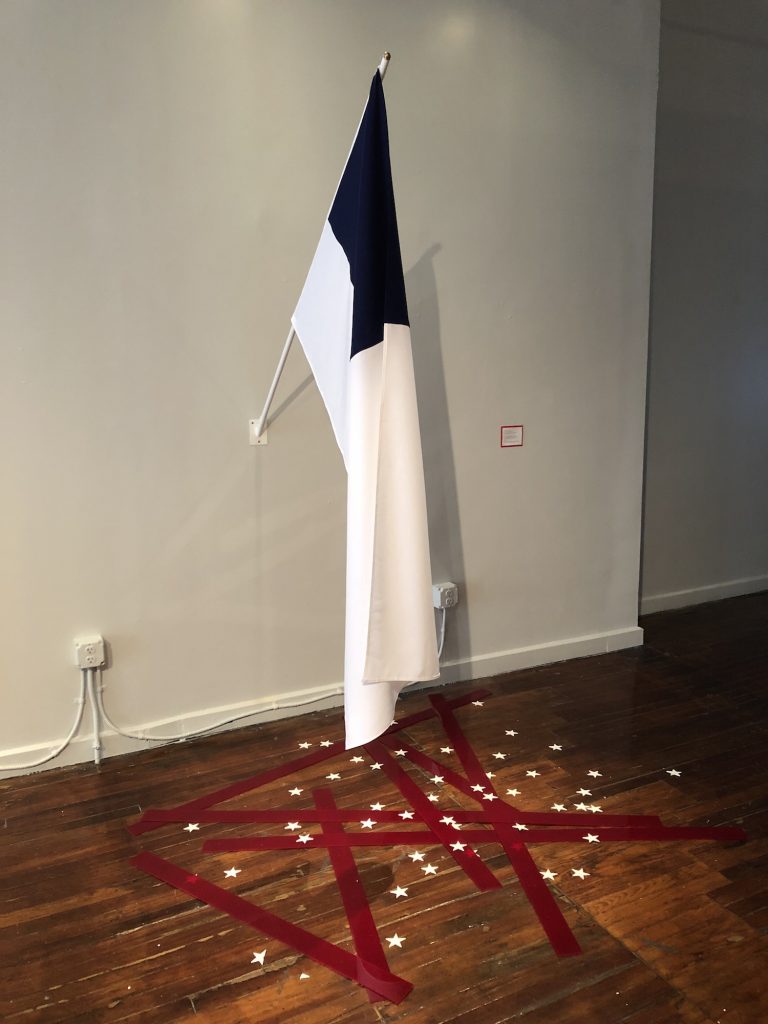 Ronnie Yarisal and Kaja Kublitz’s “Just Like Starting Over, Again”

In the center of the gallery is Ronnie Yarisal and Kaja Kublitz’s “Just Like Starting Over, Again,” which juts from the wall at an angle, like flags you might see displayed outside patriotic houses. But instead of the usual banner of stars and stripes, this flag is a blank rectangle of white with a plain blue square in the upper left-hand corner. On the floor below are splayed the red stripes and white stars missing from the fabric above, rendered in acrylic glass. The rigidity of the dismembered parts—representative of the thirteen British colonies that declared independence and the now 50 states of the union—stand in contrast to the malleability of the fabric above. The pairing suggests a dismissal of the historic boundaries on which the United States is founded, while the remaining white and blue—symbolic of purity and innocence, justice and courage—hang idly, limp with inaction, but possibility.

Perhaps it is worth noting that Yarisal and Kublitz are Swiss and Danish (respectively) and currently work in Berlin. Their interpretation of the American flag—or potential forecast for it—ultimately seems undecided. But in a nearby darkened corner at the back of the gallery hangs the other, much more decisive representative of the American flag. “Countervail” by Carver Audain is a 52-minute single- channel video displaying a disintegrating American flag, it’s tangled tresses blowing in the wind against a gray-day background. Countervail is defined as that which offsets the effect of something by countering it with equal force. Viewed alone, this would seem to refer to the absence created by the deterioration—the nothingness of wind and sky being equal in force to that of the American flag. 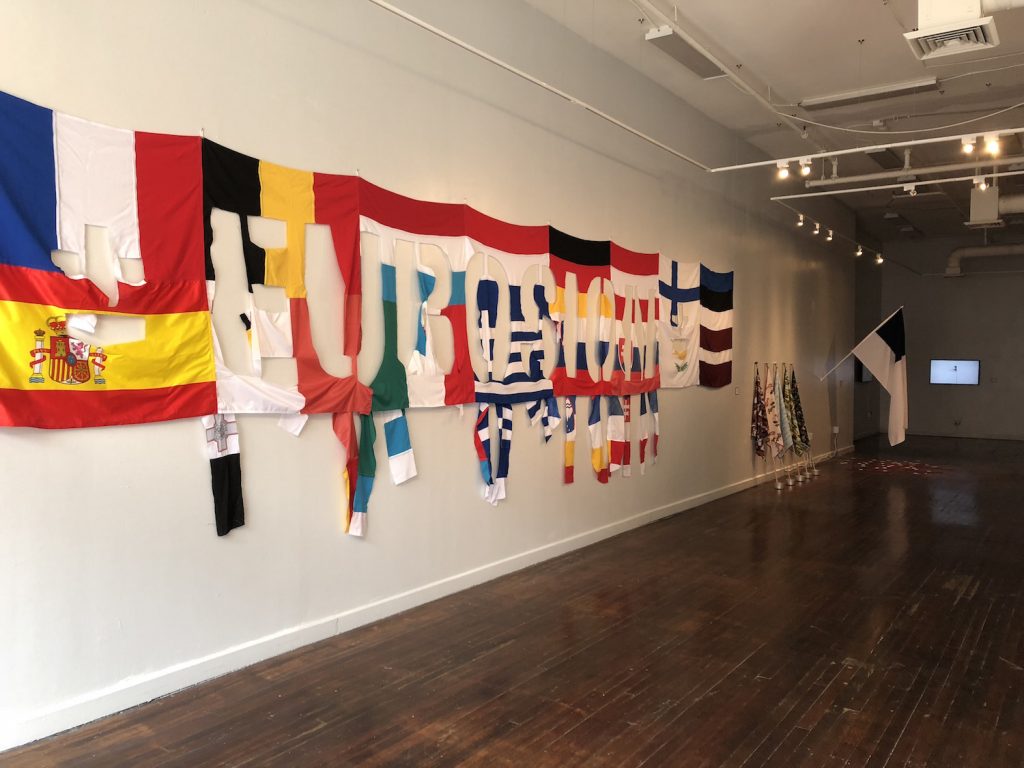 Here, though, Jarman has paired Audain’s “Countervail” with “A Far Off Country” by Amy Yee. While visually similar—a flag blowing in the wind, filmed from a nearly identical vantage point—Yee’s video is the hopeful counterpart to Audain’s tattered depiction. Yee’s flag is printed with an image of fluffy white clouds against a bright blue sky. The flag is noticeably new, the creases in the fabric still apparent, the flagpole somewhat temporary looking, as if made just for this purpose. The backdrop of the video matches that of the flag itself: a blue sky with white clouds. There is a searching quality to the work, as if the flag is beckoning the idealized far-off country where there are always dappled clouds against a blue sky. Meanwhile one can assume the flag depicted in “Countervail” will remain on the pole until it has disappeared completely, nothingness finally overtaking that which it once represented.

While the American flag may feel like a constant, it has changed numerous times since its inception to reflect each new addition to the union, most recently in 1969 with the admittance of Hawaii as a state. The format suggests a certain openness to growth and change. As of now, there is already a design for an American flag with 51 stars meant to include the US territory of Puerto Rico, though it still does not  reflect Guam, or the Virgin Islands, among other territories. For all that flags are intended to represent, what histories are left out in their rendering?

Jarman asked just this in commissioning four Baltimore-based artists to reimagine the Baltimore city flag: “Who are the people fighting on the frontlines of today’s battles who need recognition?”

Three of these four commissions worked collaboratively to realize their flags. Hamida Khatri worked with a group of women she’s made art with over the past several years as part of Project KALI—all of whom have experienced abuse, trauma, and domestic violence in Baltimore City—to create an embroidered, circular banner representative of symbols of power.

FORCE: Upsetting Rape Culture, a collaborative, activist group, created two vertical fiber panels that flank the doors to the entrance of M.A.P., displaying phrases like “Don’t be numb,” “Black Lives Matter,” and “No Justice No Peace.”

Iqrama Muhammad’s piece hangs in the gallery near a crafting station where viewers are meant to add affirmative words to the blank panels throughout the duration of the exhibition and René Treviño depicts flags through the lens of queer culture. Each of these pieces speaks to the multiplicity of experiences—the expansiveness of those who make up the United States of America— and the need to provide space for underrepresented voices.

It is assuring to step into an exhibition that puts work from national, international, and Baltimore-based artists on a level playing field. Flags are inherently complicated, but perhaps none so contested as that of the United States. In the exhibition catalogue essay, Jarman writes about the 1970 exhibition The People’s Flag Show in which the three organizers, Faith Ringgold, Jon Hendricks, and Jon Toche, were all arrested and charged with desecration of the flag. Though the charges were dropped, Jarman states, “The ordeal demonstrated that traditional conceptions about the flag meant the Stars and Stripes continued to exert an incredible power over public thinking.” From deconstructions in the gallery to flag-print bandanas and bikinis, there is fervor on all sides. 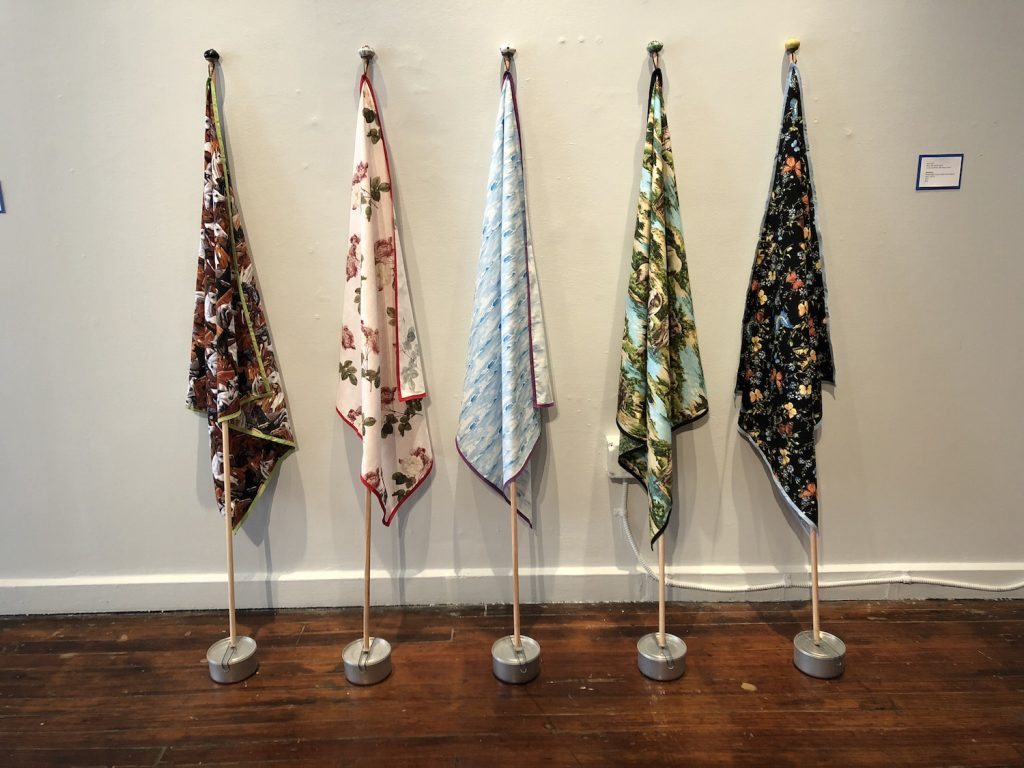 Waving and Wavering: Contemporary Artist Flags is on view at Maryland Art Place May 17-June 23.