Laughing Through It: Rachel Debuque at ICA Baltimore 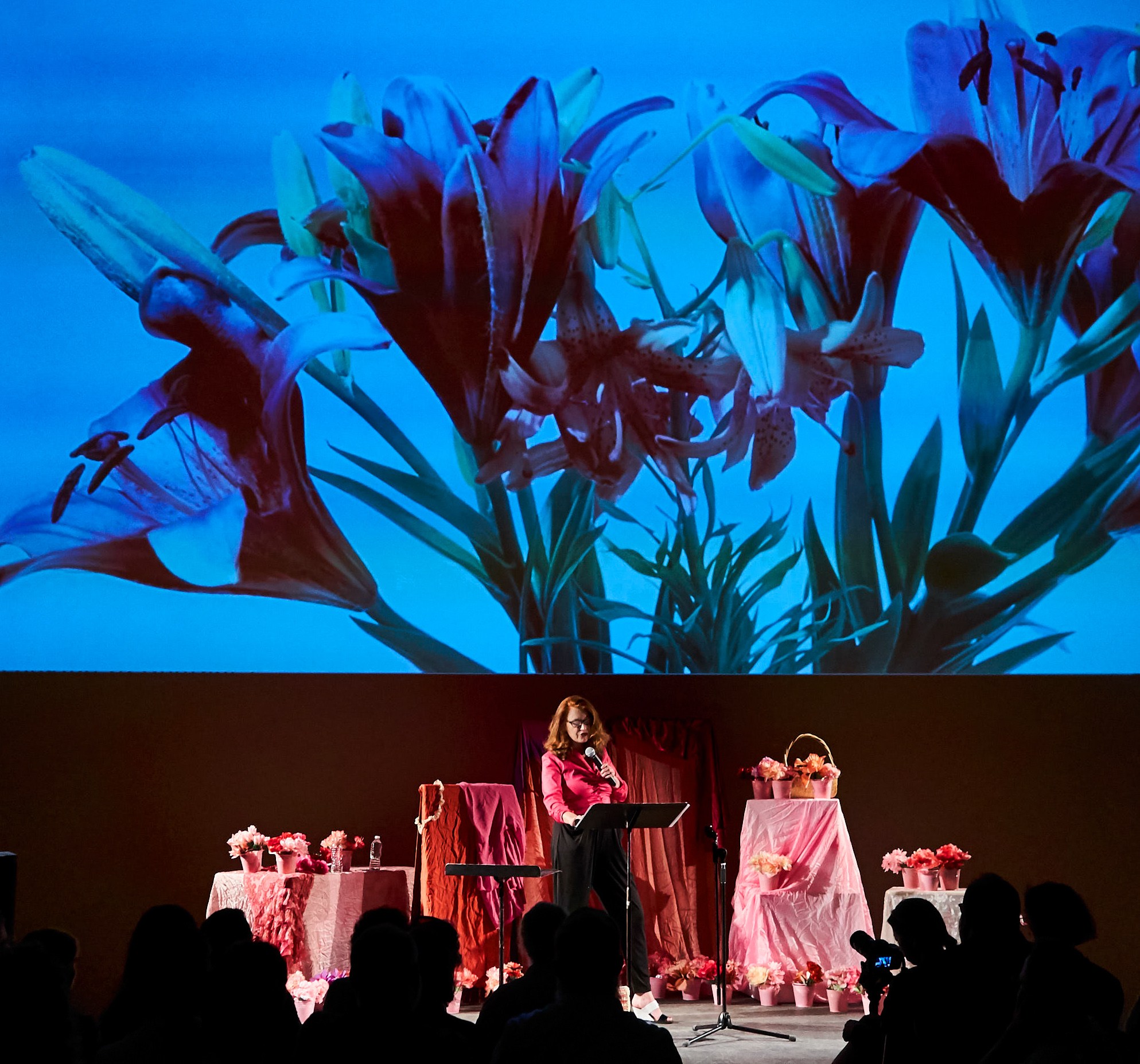 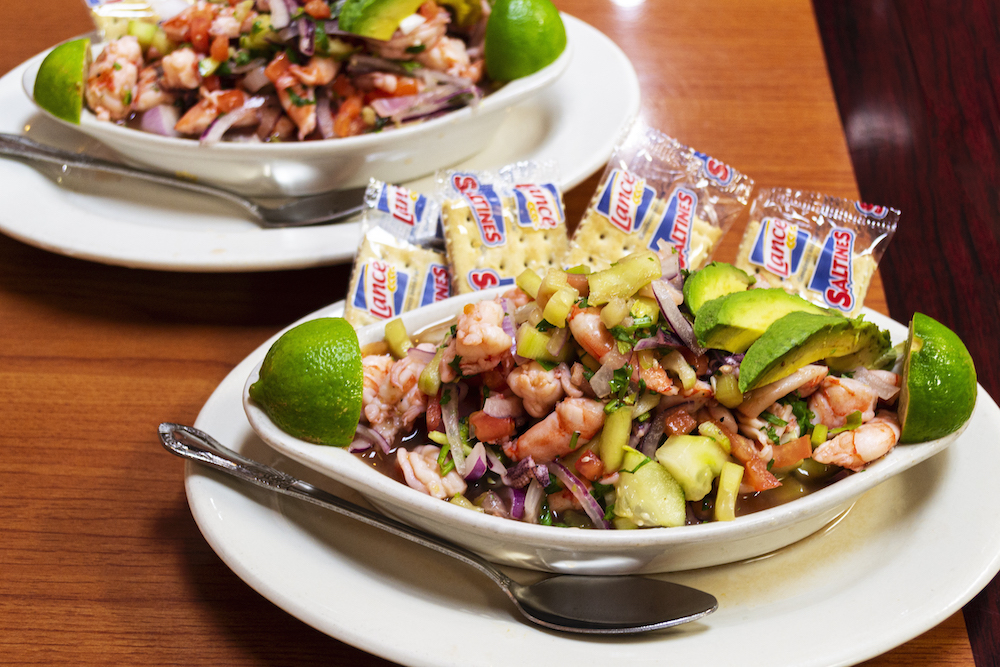 Visual Art
Laughing Through It: Rachel Debuque at ICA Baltimore 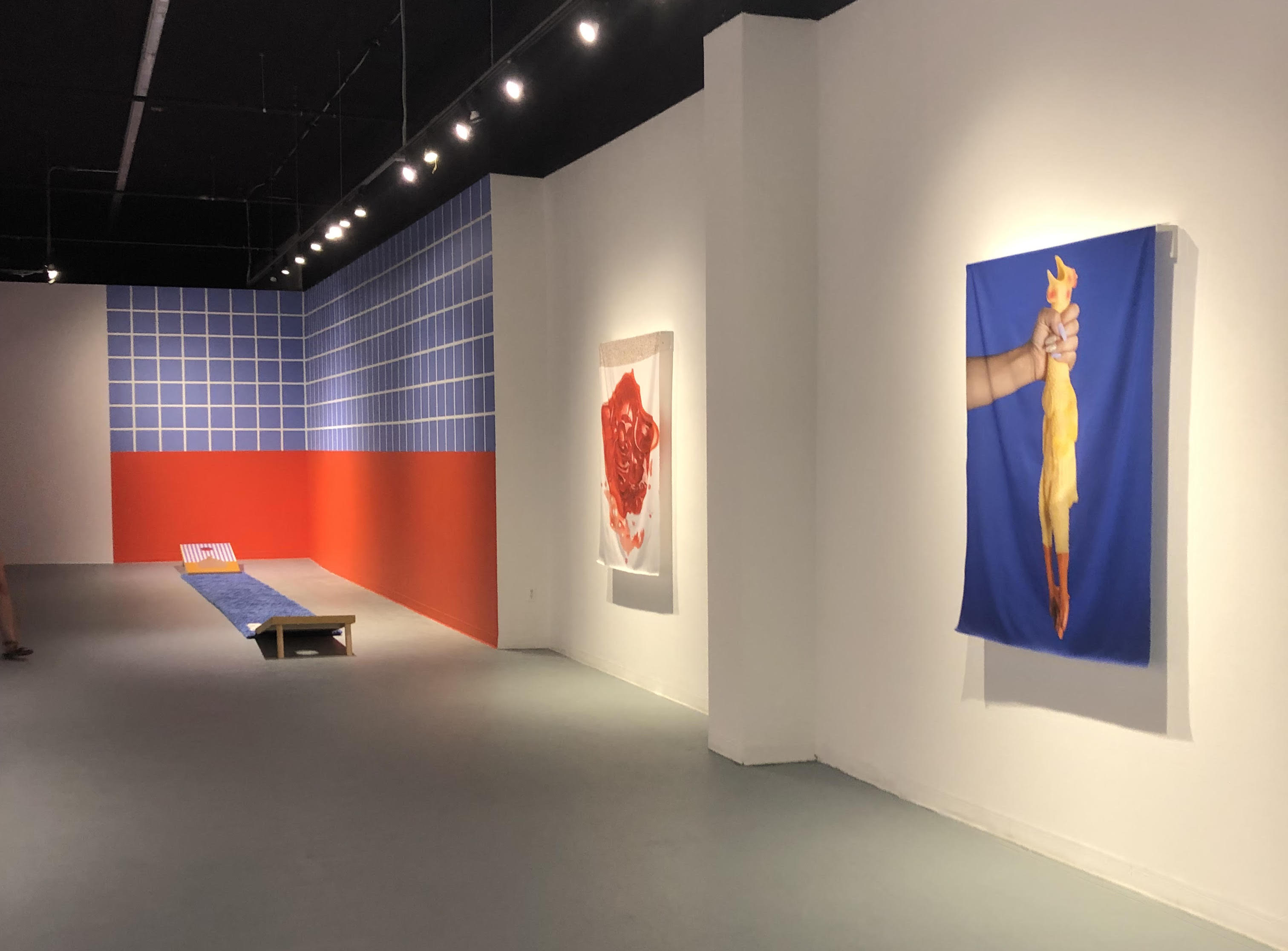 Rachel Debuque’s current exhibition at the ICA Baltimore, HaHa, keeps coming up in conversation around town lately. When people ask me about it, I always catch myself saying, “there’s this scene where…” as if describing a movie, perhaps. A comedy, definitely, and maybe even a weirdly dark comedy.

But it’s a turn of phrase that works.

Debuque has punctuated the cavernous ICA space with little vignettes and also big vignettes that sometimes feel like farcical storyboards and other times feel like stage sets. They’re unified by a sickly sweet cobalt-and-citrus palette and a graphic postmodern design sensibility that could be plucked from a big box store’s marketing moodboard. The effect is of a hyper-stylized cinematic environment.

I find myself imagining that we’re wandering the soundstages of London’s famed TV-am building in its heyday. Are we, the viewers, the actors? In the case of a functioning set-up for a game of cornhole—yes. In another installation that alludes to the absurd temptation to smash an art object—a recurring motif in the show—no. That latter “scene” (titled “Plush Temptations”) reads more like a fetishistic sanctum the artist constructed for some mischievous alter-ego, shared with the public to a gleefully exhibitionist end. 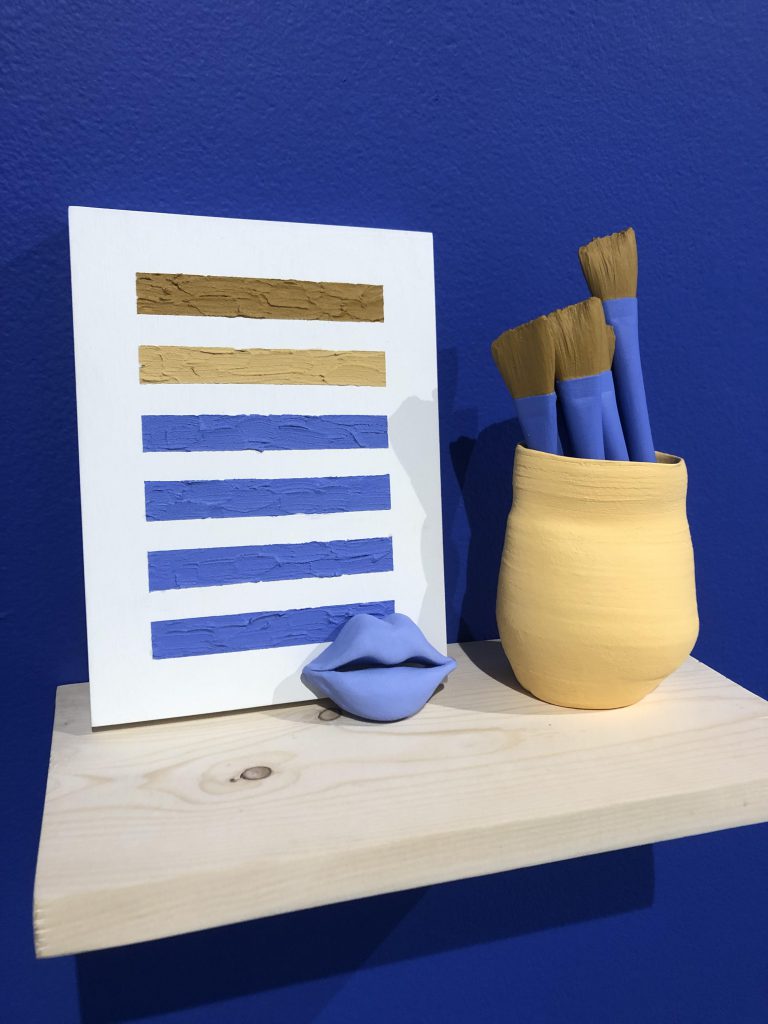 And yet, for all the lingering hunches that we’re being shown allusions to some dirty inside joke, HaHa feels disorientingly wholesome. There’s a sweetness to the artist’s consideration of surface and craft, especially in the series “Collection of Genuine Props.” These smaller wall-mounted tableaus almost function as paintings and, at certain moments, come across as endearingly self-deprecating. This might be due to references to interiors that feel personal—some works read as abstracted dioramas of domestic space or what might be the artist’s studio. Yet they’re rendered out of scale in fragile, inoperative materials.

In one, a wooden shelf holds paint brushes, an abstract “canvas,” and a pair of lips—all sculpted slightly-out-of-proportion in clay—against a saturated Klein-blue wall that looms over the small, precarious objects. It’s pretty, and a bit absurd, and maybe speaks to some likely-universal neurosis about the impotence of one’s studio practice. What maker hasn’t questioned the utility of an art object? What’s a better visual pun to chuckle away that existential awkwardness than a representation of a paintbrush, reduced to a purely decorative object?

In another assemblage, a jagged fragment of a gridded wall implies an interrupted domestic space. Like so many of my favorite moments in HaHa, this scene recalls the postmodern architecture that was probably too playful and pun-ny for its time. The whole composition basically frames a frame—it could be a window, it could be a mirror—that’s empty. While the aesthetic of “Collection of Genuine Props” is decidedly cheery, the repeated omission of details or content begins to feel unsettling, as if all is not well just below the surface in a cartoon world. Or maybe the eeriness of Debuque’s seductive cartoon world is all surface. Everything feels like a particularly twee piece of graphic design jerked awkwardly into 3-D. Something’s been lost in translation, and by merrily asking the viewer to fill in the blanks, Debuque slyly invites a bit of angst into her candy-colored oeuvre. 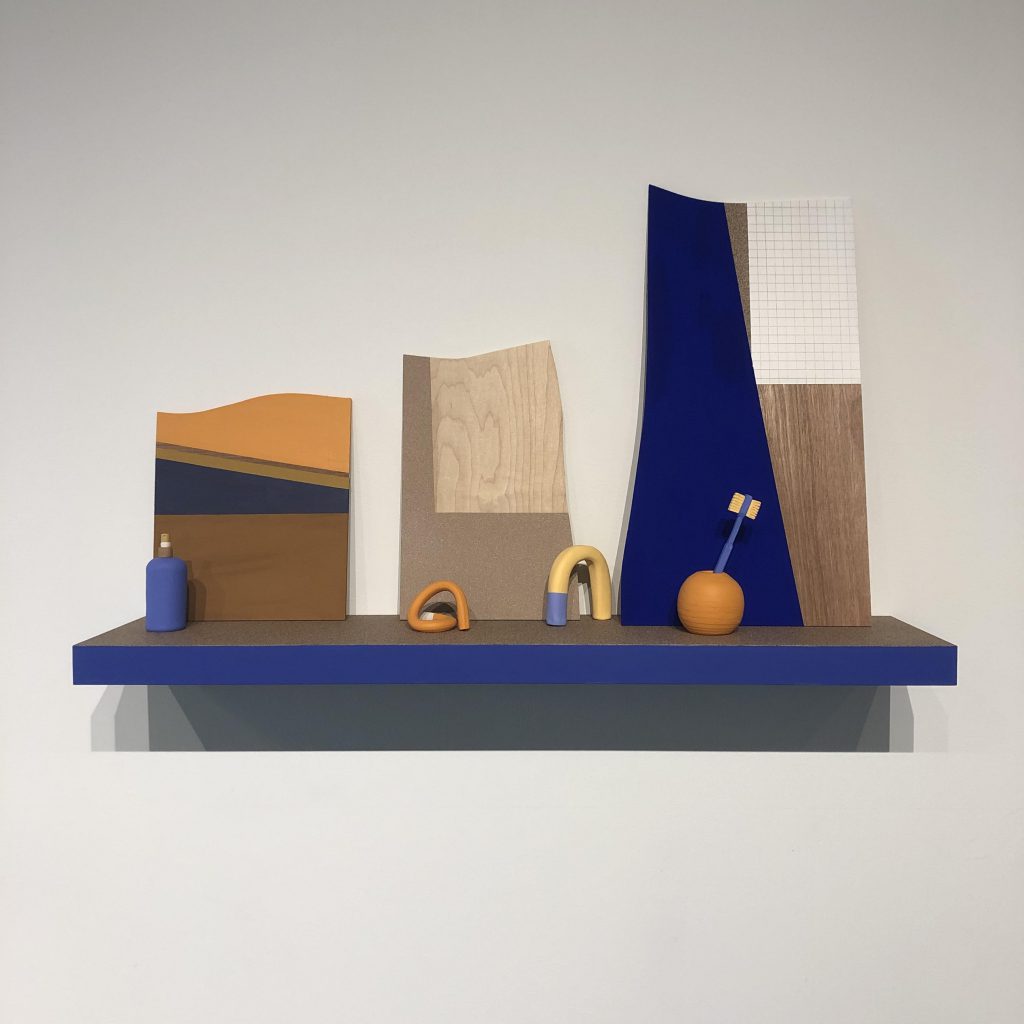 For a deceptively visually tight show, there’s a lot going on in HaHa. Like many a highly stylized film, I find myself coming back to one scene, an assemblage titled “How to Party,” as the thematic keystone. It comprises at least two dozen Klein-blue vases lined up on the floor next to a large monitor in portrait orientation. The monitor is scrolling text like a karaoke machine on a loop, beginning with “You are invited to a cool party.” It’s a second-person narration, in which the viewer imagines themself feeling the impulse to smash a hand-painted vase in the middle of a party. I didn’t see anyone actually smash one of Debuque’s vases at the opening, but I wouldn’t have been too surprised if someone did. In the text piece, the fictional “you” faces no negative consequences for smashing the vase. In fact, the other party guests in the scenario laugh hysterically. “I mean, that vase looked fancy… It was just so funny to see it break,” comments the narrator.

Why does art that invites viewer participation always make me feel so neurotic? Why can’t I just enjoy a game of cornhole in a gallery?

“How to Party” brings to mind the 2014 scandal at the Perez Art Museum Miami (PAMM), wherein Maximo Caminero smashed a colorful painted Ai Weiwei vase in protest of the institution’s perceived failure to support the careers of local artists. That piece was itself inspired by Weiwei’s own 1995 performance “Dropping a Han Dynasty Urn,” and in turn even inspired a vase-smashing video game.

There are many levels of irony in the whole story (most richly, that Weiwei was not amused by the protest/tribute). I mostly find it interesting that pottery has become a near-universal symbol for the weight of artistic patrimony in various cultural contexts—Ai Weiwei destroyed the Han vase in reference to the Maoist Cultural Revolution, but irreverent takes on Grecian or Pre-Columbian classical pottery pop up everywhere in contemporary Western and Latin American art, respectively. 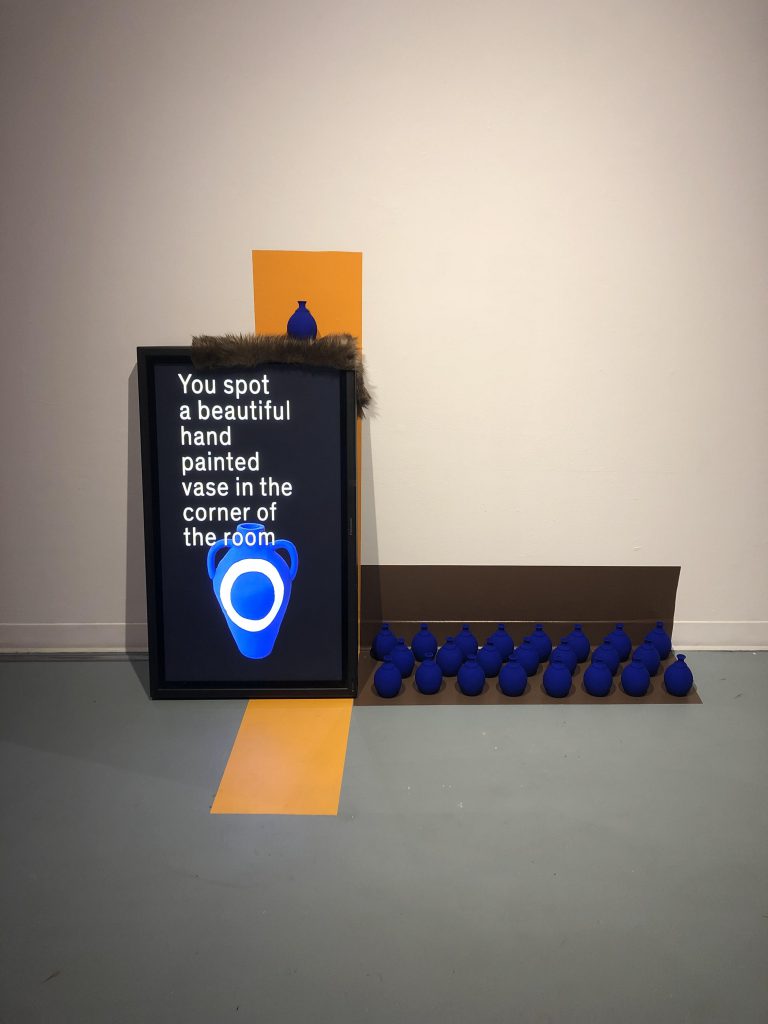 Here, we could consider Debuque’s vase as an on-the-nose synecdoche for “productive” artistic labor. Pottery is one of the more “practical” studio crafts under the weird, ever-growing umbrella of sculpture, after all. And maybe HaHa is paradoxically a show about producing design-y objects designed to tell us that the role of the contemporary artist isn’t so much about design-object production as it is about emotional labor. The exhibition’s programming, for example, included a “Laughter Yoga” workshop a few weekends ago. I didn’t get a chance to attend, but I imagine it was a bit like Debuque’s video “The HaHa Zone.” In the video, we’re guided through laughing exercises by the character Hal Henderson, a “Certified Laughter Leader.” It’s less than six minutes long and all about laughing, but strangely difficult to sit through.

That might come down to the fact that, like so much of the work here, the “how-to” video treads an uncertain line between sincerity and absurdity with a touch of existential dread. It’s always somewhat uncomfortable to be told to enjoy yourself. Watching the piece, I start to feel guilty that maybe I should be laughing. Or maybe I should make art. Or maybe I should learn to be more present and not worry about what I’m not doing? Why does art that invites viewer participation always make me feel so neurotic? Why can’t I just enjoy a game of cornhole in a gallery? 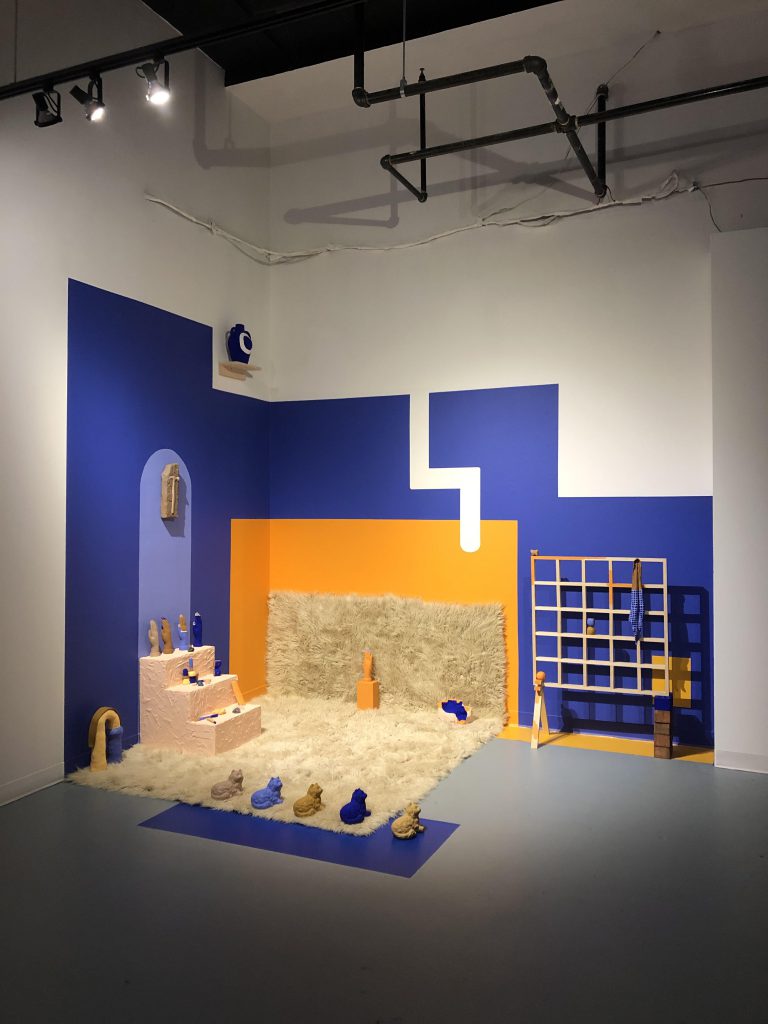 According to the artist, that cornhole installation, titled “Vase Toss,” was initially conceived using vases instead of bean bags. Confronted with the logistical concerns surrounding the prospect of gallery-goers smashing pottery all day, Debuque adapted the concept to the more pragmatic setup we see today. Which, I might add, was well-used by attendees at the opening.

Watching a group of women dutifully experience “Vase Toss,” I couldn’t tell if they were actually enjoying the game, or going through the motions of having fun. That might be the underlying tension of HaHa that makes it such a compelling show beyond its impeccable design ethos. This summer has seen a lot of Baltimore art that deals with the often-conflicting urges to participate in the sometimes-grueling labor of cultural production and to do so with a smile (or belly laugh). Christine Ferrera’s brilliant Cats, Criminals & Comedians at the Mercury Theater hybridized a feminist art history lecture with stand-up comedy. At her artist talk for Try Softer at Current Space, Lexie Mountain confessed that she got out of a creative rut by forcing herself to paint the words “HAHAHAHA” endlessly on paper, as a formal exercise/mantra. Debuque’s HaHa is a fitting coda to a season of artists playfully grappling with the unrealistic expectation that we must all always be productive and must all always enjoy it.

Leaving the show, I was reminded of a question posed to me years ago by my then-boyfriend while I was in art school and he was not. “This might sound like a dumb question, but I don’t understand,” he began, “What’s the difference between comedy and performance art?” At first I thought he was setting up the punchline to a joke, but it was a legitimate question (one that I wasn’t quite sure how to answer). Maybe Debuque’s work feels so resonant because it reminds us that in our weird field, sometimes there is no difference between the punchline to a joke and a legitimate question. 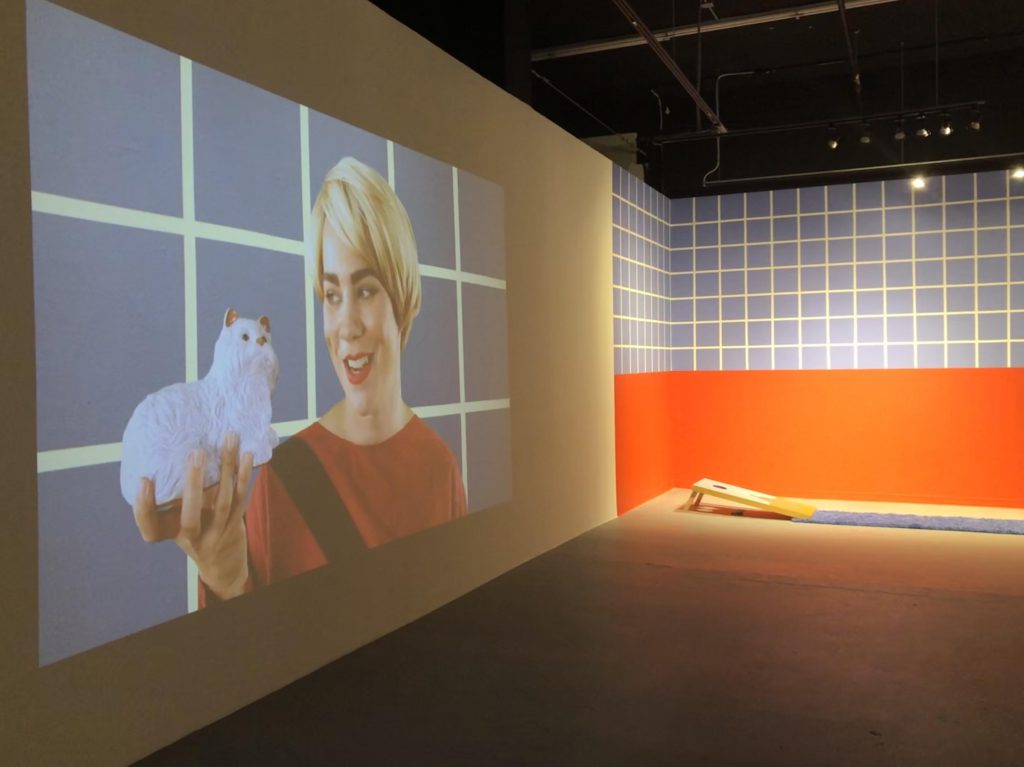 HaHa is on view at the ICA Baltimore through Sept. 8. The gallery is open this weekend, Saturday and Sunday noon–4 p.m.