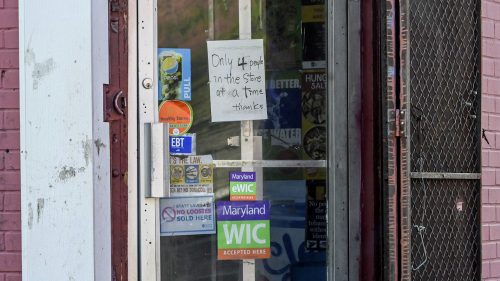 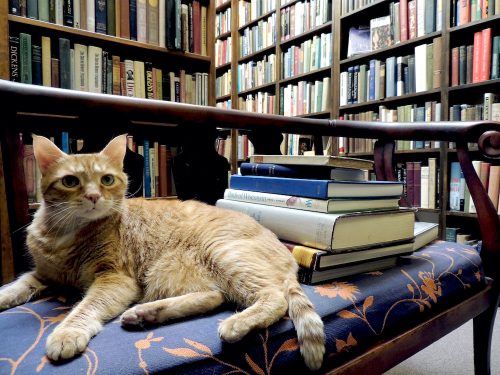 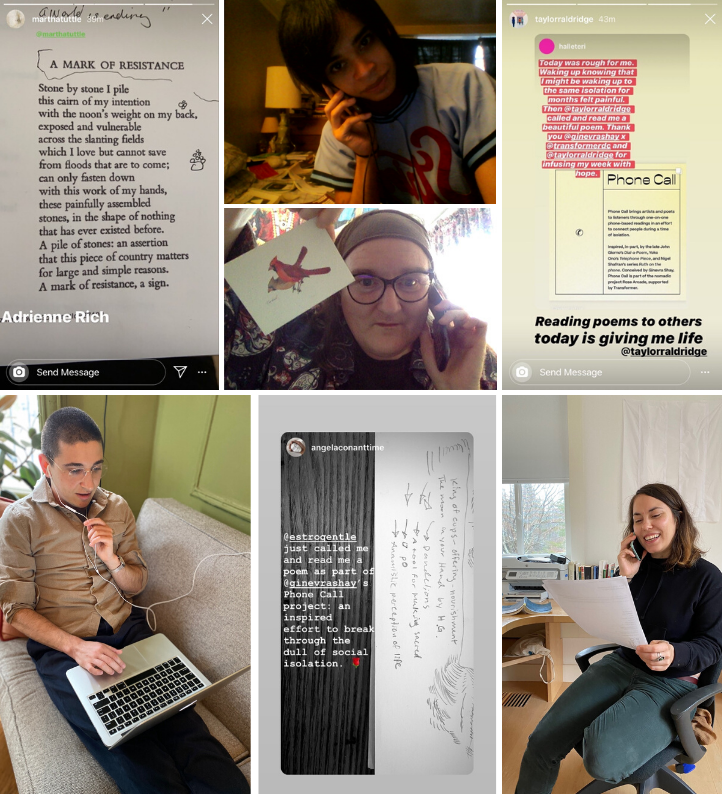 The other day I got a call from an unknown number. “Hi Nora, this is Martha.” The voice on the other end was higher than my own, soft and lilting and gentle. She said she was calling from Maine, and that it had been snowing all week but was now raining. Then she asked if she could read me some poetry.

Martha Tuttle called me because she was among the 22 artists and poets who took part in “Phone Call,” a project intended to create connection and widen circles of intimacy through poetry readings over the phone. In this weird and surreal time of social distancing and self-isolation, a stranger’s voice can feel like a warm invitation.

Before she began reading, Tuttle mentioned that she was calling me from her kitchen, and so I imagined what her kitchen might look like. Was there a window that she could look out from? Was the room painted white or yellow or blue? Was she sitting at a kitchen table or counter, or was she standing while she spoke to me?

“In a phone conversation you’re imagining a new world with someone,” said Ginevra Shay, who conceived and curated the project. “I think this is a time where we, collectively as humans, need to start radically reimagining the spaces we share, and the world we want to return to once this is over.”

Shay recruited multimedia artists such as Abdu Ali, Anna K. Crooks, and Malcolm Peacock, along with poets such as Kelly Xio and CA Conrad. While there were no limitations placed on the phone calls—artists could read whatever they like, and a reading could become a conversation—Shay wanted the project to be rooted in poetry for the medium’s transformative power.

“People who aren’t familiar with poetry can be dismissive and think of it as flowery and non-essential but I think it’s actually the exact opposite,” Shay told me, explaining that when a totalitarian regime takes over a nation, “one of the first things that’s destroyed is poetry or cultural artifacts, anything that reminds the people of themselves and their identity.”

Shay was inspired by projects such as John Giorno’s “Dial-a-Poem,” in which people could call and hear a pre-recorded poem from Frank O’Hara or a speech by Kathleen Cleaver, as well as Yoko Ono’s 1964 “Telephone Piece,” which consists of a single white telephone that only accepts incoming calls from Ono herself.

“Phone Call” differed from those prior pieces in the intimacy that it fostered. A one-on-one reading allows for a private moment between two people, an exchange that is rare for most art projects. Intonation, cadence, and breath provide proof of a living being that can’t be matched by text or other forms of communication.

Ty Little, one of the poets involved, pointed out the unique physicality of talking on the phone. “The phone itself is physically very close to you. It is held up right to your ear,” they said. A phone call “offers a change of proximity and offers this different sensory experience of closeness.”

With just a voice on the other line, you become less conscious of your physical body. “There’s no awkwardness or gestures or things that maybe you’re uncomfortable with someone else to see,” Little said. “So you’re sort of able to come into conversation with a stranger fully as yourself.”

“I was excited in the phone calls about the ways in which our physical realities fell away,” said Amina Ross, another artist involved. “I didn’t imagine where they were or what their bodies were doing or even what they looked like. I felt really content to share this headspace.”

Tuttle read me four poems over the course of our call: “‘Hope’ Is The Thing With Feathers” by Emily Dickinson; “A Mark of Resistance” by Adrienne Rich; “Poem Number Two on Bell’s Theorem, or the New Physicality of Long Distance Love” by June Jordan; and a letter Rainer Maria Rilke wrote in 1906 to his wife Clara.

I was surprised when I found myself welling up in response to Tuttle reading Rilke’s letter: “Here it is spring. There is only the one word for it. And already it is no longer premature to say so. The violets are past their bloom, the blue periwinkle looks large-eyed out of its dark green, the primroses are standing side by side in big groups, as though they had run together from everywhere, and the wallflower is as if darkened by its own heavy perfume.”

Lately, I’ve been taking walks around my neighborhood since it’s one of the few options to escape my house. The magnolia tree across the street has unfurled its pink and white blossoms, and the azalea bushes are about to burst. It’s been a strange experience, to say the least, seeing life spring forth while I’ve felt like the world is ending. I waffle between waves of denial, bargaining, and depression, and then I call my friends and family.

I call my friend Alonso, who answers the phone with a simple, “Hi friend.” He lives in Montreal, but grew up in Peru and tells me the government there has arrested people for violating quarantine, then placed them in crowded cells, which of course then causes the virus to spread further. He says he is writing every day though, and sends me a piece by Ty Mitchell about longing, libido, and cruising Grindr in quarantine.

I call my friend Zoe, who lives in Toronto, who tells me her brother is likely sick with coronavirus, but that he can’t get a test. I call my friend Brooke in New Orleans, who is out of work but quelling her anxiety with 20-mile bike rides every day, and my friend Leila, also out of work, but who just qualified for the maximum unemployment that Louisiana provides: $247 a week. “If I hear anybody complaining about people mooching off unemployment, I’m going to…” She trails off and I can only imagine her shaking her fist in rage.

With so many people out of work as a result of the Covid-19 pandemic, “Phone Call” partnered with Transformer DC to provide the artists a modest stipend. “I wish people cared about artists as much as they love art,” Shay said. “The United States has no safety net in place for artists though we’ve influenced culture all over the world, our work hangs in people’s homes and sits in storage as other people’s investments.”

In “Phone Call,” artists called numbers randomly selected from the list of 240 people who signed up for the project. Ross likened the calls to a chance encounter. “I felt like it was proximate to what it would be to run into a stranger on a bus and then have a conversation that felt meaningful, and how powerful that is—how we can feel for another person outside of having any kind of tangible connection to them or knowledge of who they are or where they’re from,” Ross said.

A pandemic in many ways is a game of chance: a person’s movement through time and space intersects with their risk factors—age, pre-existing conditions, immunity—which are then exacerbated by societal failings and structural oppression.

Ross described walking down the street the other day and the anxiety they felt any time someone came close. “I was feeling fearful of others in a way that I don’t normally,” they said. Ross has been wondering how to stay soft in this time of rigid boundaries and borders, this time when any new person within a 6-foot radius can induce a panic response. “What is the work that we can do to still remain open to one another while we need to be physically distant?”

During our phone call, Tuttle read me “A Mark of Resistance” by Adrienne Rich. The poem describes creating a cairn, or as Rich writes, “a pile of stones: an assertion that this piece of country matters for large and simple reasons. A mark of resistance, a sign.”

Tuttle said she chose the poem because it shows how even small actions can hold beauty and power. She’s been thinking about how “in a time like this, small gestures end up becoming this super heightened contribution,” she said. “I really believe that everything that people are doing, even if it’s just calling a friend or making some cookies for someone in their household, is adding to this caretaking spirit, which I feel almost as strongly as the intensity of the sadness.”

The coronavirus pandemic has magnified inequalities already in place; it has caused irreparable damage, and could have been prevented. At times, I feel overwhelmed by the devastation and loss. The invisible forces at play can feel like an undertow, and it’s easy to get swept up in the sadness. In a small act within my control, I call my friends and family in other cities and in other countries, just to hear “Hello, friend” on the other end.

Images courtesy of the artists