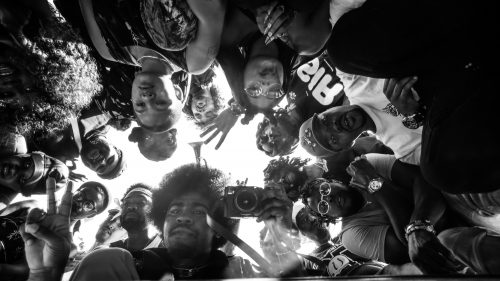 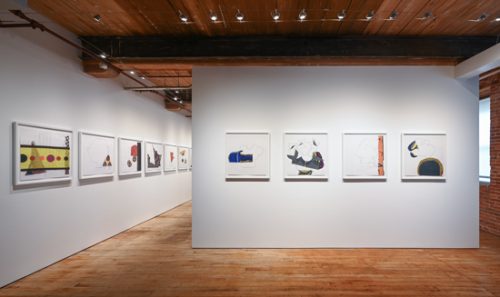 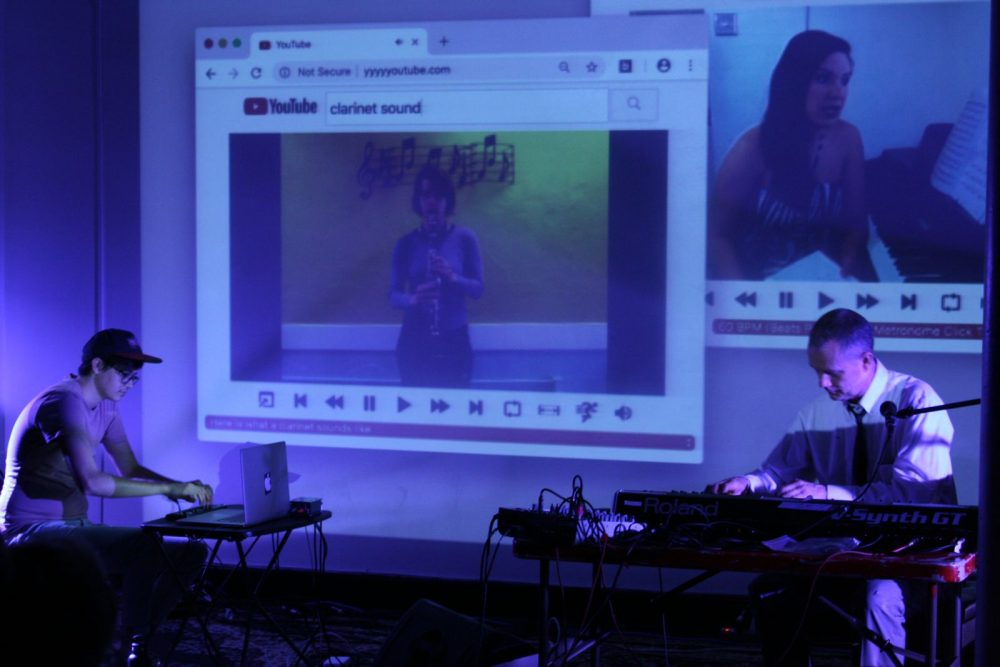 For the first time in its 22-year history, the High Zero Festival of Experimental Improvised Music will not be bringing artists and musicians from around the world to Baltimore to share a stage with local artists and musicians just to see what happens—for the obvious pandemic reasons. As with so many other art, film, music, and stage endeavors this year, High Zero is going virtual, collaborating with similarly minded artists and festivals in Chicago, Santa Fe, and Seattle to curate a streaming event starting this week on the festival’s Twitch channel.

“I often say that 80 percent of art-making is solving problems in interesting ways,” says Martin Schmidt, one-half of Baltimore’s electronic duo Matmos and a member of the High Zero Foundation that organizes the festival. By January, the organization—which, in addition to Schmidt, includes Andrew Bernstein and Owen Gardner of the band Horse Lords, composer/producer CK Barlow, saxophonist Rose Hammer Burt, composer Samuel Burt, saxophonist Jamal Moore, percussionist Paul Neidhardt, percussionist Shelly Purdy, artist/filmmaker Jimmy Joe Roche, artist/educator Bonnie Jones, electro-acoustic composer/performer Jeff Carey, and artist/musician John Berndt—had finalized a group of local and international musicians and sent out invites. Over the spring and summer, they would start finalizing travel plans and housing arrangements, volunteer schedules for working the festival and picking up people from the airport, designing and printing posters and other advertisements, and so on. (Note: in previous years, I’ve volunteered for the festival.)

By June, they realized that this year’s festival couldn’t proceed as usual. “Like many people, in March we believed by September things would be fine,” Schmidt says. “We had already invited a full roster of people from around the world. Of course, by midsummer we sent all those people emails that said, OK, this is clearly not going to happen.”

Virtual events and livestreams became the de facto response to the pandemic by arts organizations for practical reasons: It’s a socially distanced way to deliver programming and content when people can’t congregate in clubs, galleries, and theaters. But if you’ve watched a theater production, performance, concert, or even artists talk via Zoom or some other platform over the past six months, you know how odd the experience can be through no fault of anybody involved. I’ve often found myself feeling anxious and frustrated after a virtual music or theater performance. I can’t clap. I feel bad because tickets are often cheaper than usual—or free—because it’s a virtual experience, even though I imagine artists aren’t putting less labor into their performances. And, to a middle-aged dolt like myself, typing 🔥🔥🔥🔥 in an online chat during the virtual performance just doesn’t feel as in-the-moment sincere as shouting your appreciation from the crowd.

And that’s just one audience member’s perspective. For performing artists, “I think there’s a lot of fear” in virtual performances, Schmidt says. Matmos has played a few such concerts, and he likens the glow of a recording webcam to the all-seeing artificial intelligence from 2001: A Space Odyssey. “The psychic, spiritual feedback of sitting in a room with a bunch of other people is so different from sitting in a room by yourself with HAL, this little round red circle staring at you. At best, it becomes extremely intimate. At worst, it becomes extremely alienating.”

Those are feelings too many artists are wrestling with right now, but I imagine it hits underground and niche artistic communities such as those who frequent High Zero especially hard. Like small-press poetry chapbooks, the commercial market for experimental musicians and improvisers isn’t huge, and as with independent bands, neither digital album sales nor an insultingly minuscule streaming revenue doesn’t consistently cover groceries, much less pay the bills. Such music and performance seeks out the unexpected, the unknown, the WTF?, as part of its reason to exist—of course it sidewinds through pop culture’s fringes. Touring and hitting spots like the Red Room at Normal’s Books and Records is often how artists piece together income, find new fans, and build connections with other similarly curious artists.

It's difficult to measure the impact active, regular spaces for creative labor have on local communities—not simply for the art made there, but for the relationships and conversations these spaces provoke.

That vital community-building aspect of the Red Room and High Zero is something I’ve witnessed as a local writer for nearly 20 years and as an interested fan for a little longer. Nine local artist, musician, and writer friends started a shop for used books, music, clothing, and bicycle repairs on East 31st Street called Normal’s Bargain Cobbly World in 1990, a time when underground improvisers and performance artists of every stripe might’ve played the 14 Karat Cabaret or an underground vegan restaurant in a Mount Vernon alley, if they played Baltimore at all. A group of musicians formed the Red Room in 1996 to organize and hold weekly concerts in a small performance space connected to Normal’s. That same year, the Red Room started the Volunteers Collectives’ Crap Shoot, a monthly free-improvisation workshop through which a number of artists, classically trained musicians, non-musicians, and interested minds have found their way into improvised music, a Red Room concert, and even performing at High Zero.

It’s difficult to measure the impact active, regular spaces for creative labor have on local communities—not simply for the art made there, but for the relationships and conversations these spaces provoke. Echoes of High Zero’s format—putting individual artists who’ve often never collaborated with each other before and seeing what happens—can be seen in Matt Frazao and Adam Hopkins’ Out of Your Head weekly concert series that ran at the Windup Space from 2009-15 and Wendel Patrick and Eric Spangler’s Baltimore Boom-Bap Society‘s monthly hip-hop improvisation sessions. Over the years, I’ve heard various members discuss ideas raised in Red Room and High Zero meetings that, from today, we recognize as issues the arts writ large has needed to confront for a long time—such as aspirations to be less male, less heteronormative, less white, less status quo, and more open to artists and activities (dance/movement, film, installation, and more) they’ve never seen or heard before.

This slow, steady focus on community-building is how High Zero organizers consistently produce a festival environment where the unseen and unheard happens with such satisfyingly high quality. Yes, experimental music and free improvisation sometimes get portrayed as being excessively eggheady, and there’s certainly a strain of that out there, but it’s just as frequently beautifully sublime, radically political, crushingly intimate, and visually dramatic. And over the years Baltimore’s cadre of noisemakers, music theorists, and instrumental virtuosos have cultivated streaks of silliness, irreverence, absurdity, and euphoria in the scene’s personality. High Zero shows aren’t just musically intense, they’re also quite frequently outlandishly entertaining. If there are other festivals that open up a night of concerts with Lungfish’s Daniel Higgs getting Old Testament hypnotic on a Jew’s harp or features percussionist Bob Wagner throbbing out something like backbeat while artist Vicki Bennett collages found footage and a disheveled John Kilduff briskly walks on a treadmill, paints, and extemporaneously babbles, I’ve yet to attend them.

How all of the above translates to the computer screen is one of many reasons to check out this week’s virtual version of the event. Each night features a few solo performances, an ensemble, and a video commission. Festival organizers partnered with Chicago’s Elastic Arts nonprofit organization for Thursday’s schedule, the community artists who organize the High Mayhem festival in Santa Fe for Friday, and the 35th annual Seattle Improvised Music Festival for Sunday night. High Zero curated Saturday night, which includes solo performances from local artists Lucas Yasunaga and Ada Pinkston and a video piece by Timothy Nohe.

And as in recent years past, Schmidt will emcee the virtual event, joined by Tom Boram. When asked if he’s picked out his wardrobe yet, Schmidt alludes to the never ridiculous attire worn by television sports commentators. “We’re thinking about sitting at a table side by side in blazers,” Schmidt jokes, and dryly tries musical observation into a sports’ turn of phrase before laughing. “Honestly, we haven’t really decided how we’re doing it yet.”

High Zero 2020 runs Sept. 24-28 on the High Zero Twitch channel. Every night is free, but donations are being accepted via the festival’s home page.