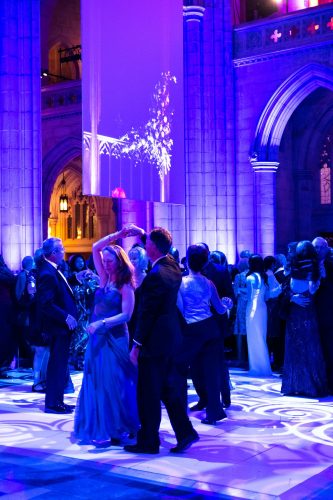 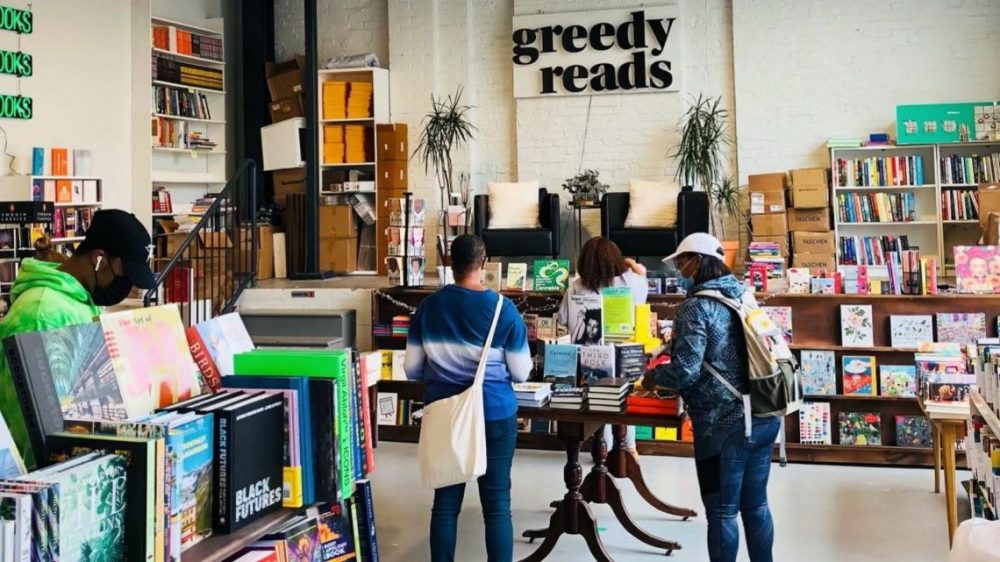 Excerpt: When she moved to Baltimore from New York City about five years ago—leaving a long career in publishing behind her—Julia Fleischaker feared she would lose access to “the world of books” that the Big Apple made so easily accessible. But, as she soon discovered, her new address had its own.

“One of the things about Baltimore’s literary community that I found really inspiring and cool is that it’s not some kind of walled-off world you have to scale the fences to get into. It’s just part of the rhythm of the city. If you’re here, you’re part of it,” says Fleischaker, who opened independent bookstore Greedy Reads in Fells Point four years ago, and later debuted a more expansive second location in Remington.

Throughout the past two years, Fleischaker says she’s missed “the energy you get from people gathering together to listen to stories and engage with their neighbors.” When she realized that the Baltimore Book Festival, which has been paused since 2020, would remain on a hiatus this year, she figured, “If we want this, other people probably want it too. Maybe we can throw something together in our store.”

Please note: BmoreArt will be sharing our new print journals on Saturday, May 14 at 11:30 am during a panel about collaboration – with photographer E. Brady Robinson, Mary Fissell of the Baltimore Jewelry Center, and Chandi Kelley of the Walters Art Museum. Our discussion will center around a photo series by Robinson created for Issue 13 in collaboration with the BJC and Walters.

D. Watkins Talks to Baynard Woods about His Deeply Personal New Memoir
by Baynard Woods
Published May 11 in Baltimore Fishbowl

Excerpt: D Watkins is a writer. He’s an essayist, a screen writer, a columnist, a ghost-writer, a reporter, and a memoirist, but he’s not just any of those. He is all of them together, all of them at once, after the manner of someone like James Baldwin, whose writing spanned the breadth of our cultural forms. Watkins is probably best known for his memoir The Cook Up, which follows his life through the drug game and ultimately his escape from it through his discovery of literature.

Though it is easy to revel in the vividly portrayed details of the streets, the structure of the book is part of what makes it so remarkable. The story is put together through a series of subtle twists that keep the narrative and emotional stakes in a state of flux. His new book Black Boy Smile: A Memoir in Moments is also defined by a structural and literary bravado, but it is also a new departure for Watkins. Addressing masculinity, fatherhood, love, and violence, the moments that make up the narrative are vulnerable and raw.

For full disclosure, we’re friends and I have edited D’s work and we’ve worked together and offered each other criticism and are on the same press. And Marion Winik, the editor of this piece and the series, has long worked with Watkins at the University of Baltimore where they are both professors and where he was once her student. But such connections only go to show how central Watkins is to Baltimore’s literary community.

We sat down at a restaurant near the UB after his class on a recent spring evening and talked. The following account has been edited for length and clarity.

Excerpt: James Beard Award-winner Toni Tipton-Martin never set out to amass more than 1,450 cookbooks, 450 of which were written by African Americans. It just happened.

She found a veritable treasure trove of such books and recipes through her research and just kept going. She now stores many of those cookbooks in her recently purchased Charles Village home, a 120-year-old fixer-upper that she shares with her husband, Bruce Martin, a Naval Academy grad.

Her road to Baltimore—and her life as a writer, archivist, historian, and broadcaster—was hardly a straightforward one. She started out as a food writer in Los Angeles; accepted a job in Cleveland, becoming the first Black food editor of an American newspaper; took a two-decade hiatus to raise her four children; and spent 10 years researching a groundbreaking project.

Excerpt: The boxed items given out every week to residents who live near the Liberty Rec & Tech Center were pretty basic, but were highly coveted.

“Inside each box would be four or five potatoes, four or five apples, a bunch of lettuce, maybe a head of cabbage and some radishes or beets,” said Kim Trueheart, who has been running the free federally funded distribution program since the Covid-19 pandemic struck two years ago.

The recipients, in many cases senior citizens with limited access to transportation, made their way to Trueheart’s program off Liberty Heights Avenue in northwest Baltimore.
Or they sent younger family members. Or counted on the boxes being delivered by volunteers.
But that isn’t happening this week.

Along with dozens of other distribution programs across Baltimore funded by the Federal Emergency Management Agency, Trueheart learned from city officials that FEMA has decided to stop providing the funds.

“This is devastating. Many of our neighbors have come to rely on this resource,” said Evan Serpick, who has helped run a similar program out of Beth Am Synagogue at 2501 Eutaw Place.

Excerpt: Like many GOP battles around the country this year, the gubernatorial primary in Maryland features a Trump backed candidate, Del. Daniel Cox (R), squaring off against someone from what used to be called the establishment wing of the party, former Commerce Secretary Kelly Schulz.

What’s different in Maryland is that Schulz is backed by outgoing Gov. Lawrence J. Hogan Jr. (R), a frequent Trump critic who has increasingly broadened his criticisms of the former president and encouraged his party to go in a different direction.

The Schulz campaign’s early reluctance to engage fully with the Frederick County delegate appeared designed to avoid alienating the former president’s many supporters, who she will need in the general election if she is the nominee — and to minimize whatever threat Cox presented to Schulz, the perceived frontrunner.

Her campaign has adopted a noticeably more assertive stance regarding her main rival in recent weeks. Although the candidate herself rarely mentions him by name, her camp has begun slamming Cox with gusto.

Excerpt: The Baltimore public library system used to take a hard line on truancy: children and teens who came into a library building during school hours were asked for documentation to show why they weren’t in class.

But the Covid-19 pandemic and a new focus by city agencies in Baltimore on the toxic effects of trauma have led library officials to reexamine their punitive approach.

“We’re going through all of our policies and thinking about how the world has changed and we’re applying a new lens,’’ said Heidi Daniel, CEO of the Enoch Pratt Free Library system.

“It’s not just about following the rules to a T. It’s about thinking about how these rules impact our community, which we know has experienced a lot of trauma.”

U.S. Attorney’s Office hid – for nearly two years – its deal to water down Pugh’s sentence
by Mark Reuter and Fern Shen
Published May 5 in Baltimore Brew

Pugh “slowly and secretly, over the course of many years, conspired. . . to use the stature of her public persona for her own personal gain,” they said.

The amount of money, they pointed out, was huge – more than $700,000 gained through fraudulent means.

And the scheme itself – hawking cheaply produced “Healthy Holly” children’s books to nonprofits and businessmen dependent on Pugh’s actions as a state legislator and then as Baltimore’s mayor – was “shameless” and “sophisticated.”

They described how Pugh double sold the books, keeping the advance payments, charging for books that for the most part were never distributed, as promised, to poor Black children, then hiding the fraud with doctored invoices and a fake consulting contract.

“It’s like something right out of a mobster movie,” Assistant U.S. Attorney Martin J. Clarke told Judge Deborah K. Chasanow. “There was a bag man, Mr. Gary Brown. His job was to go around town and collect the cash she would call into the bank.”

Big Fish: Jayne Miller and the role of journalists in their communities
by David Nitkin
Published May 10 in Baltimore Fishbowl

Excerpt: Jayne Miller has been a continuous and vigorous presence on Baltimore television for decades, and as the chief investigative reporter for WBAL-TV, has deployed tenacity and passion to break some of the biggest stories in the region.

She started in journalism in 1975, joining a newspaper while still a Penn State undergraduate . Her first television job came the following year, and she joined WBAL-TV in 1979. She briefly joined CBS News, but returned to Baltimore in 1983, and is approaching 40 consecutive years with the station – a remarkable run.

In February, Jayne was awarded the Radio Television Digital News Foundation’s lifetime achievement award. It is just the latest in a string of accolades. In 2016, she won a DuPont Award from Columbia Journalism School. In 2012, she won a National Edward R. Murrow Award. She has twice been named by “Baltimore Magazine” as one of the 50 most powerful people in the region.

Miller talked with Baltimore Fishbowl about what’s changed, and what has stayed the same, since she got in the business, along with her thoughts about urban planning as a tool to help neighborhoods, and her views on journalists being involved in their communities.

Women on the Ballot: Emerge Maryland Sees Jump in Candidates This Year
by Elizabeth Shwe
Published May 9 in Maryland Matters

Excerpt: As women candidates have made progress nationally and in Maryland over recent election cycles, a training program for Democratic women is seeing an increase in the number of candidates on the 2022 ballot.

Emerge Maryland — an organization dedicated to electing more Democratic women to public office — has seen a big jump in candidates since last cycle.

In 2018, 46 women who graduated from Emerge Maryland were on the ballot and this election cycle, 63 graduates of the program filed to run for federal, state and local offices.

“I see a sea change over the last eight years in the number of women running — people are becoming more accustomed to seeing women on ballots across the state and across the nation,” said Diane Fink, the executive director of Emerge Maryland, which launched 10 years ago.

Fink said she has noticed more women — 76% of Emerge Maryland alumni on the ballot — in the “New American majority,” who are typically young, unmarried and people of color, seeking office this year.

Excerpt: Rep. Anthony Brown, Democrat of Maryland, wants to be the state’s top law enforcement officer, but his own campaign’s spending may violate state election law, according to campaign finance experts.

The three-term congressman announced on Oct. 25 that he would retire from Congress and run for Maryland attorney general. Since then, he has used funds from his Congressional campaign account to bankroll his bid for statewide office, a TIME review of his financial disclosures shows.

Brown’s Congressional campaign spent as much as $40,000 supporting his campaign for attorney general between November 2021 and March 2022, the TIME review found. The biggest ticket item was more than $24,000 for the salary for his state campaign’s finance director, according to Brown’s most recent filings with the Federal Election Commission. Meanwhile, Brown spent nothing from his state account’s war chest to compensate the campaign’s staff in its first months of operation, the TIME review found.