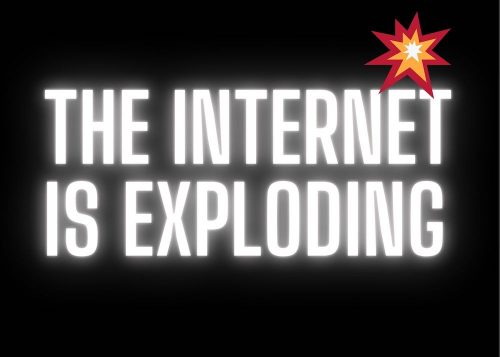 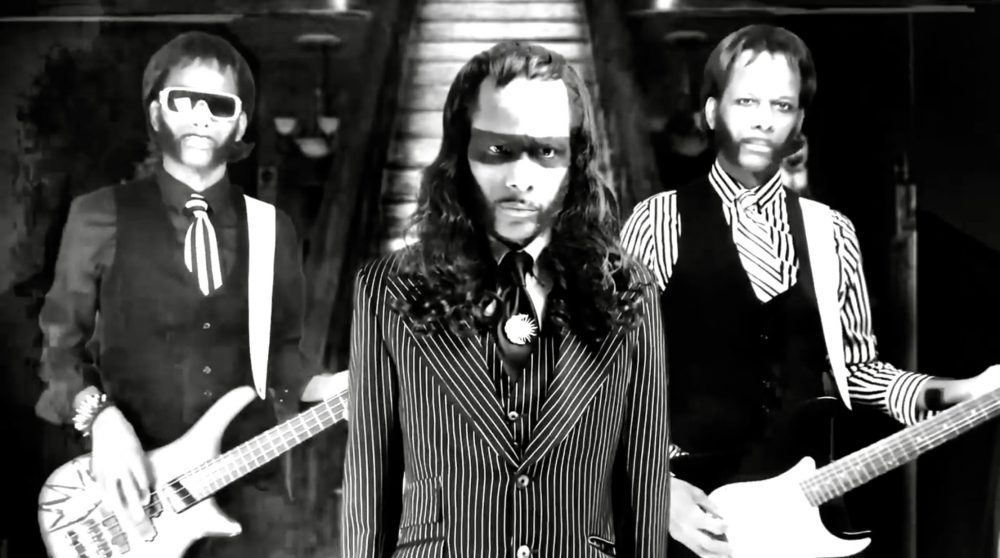 A fixture of the music scene for more than 25 years, Expandis rose to prominence fronting the All Mighty Senators soon after arriving in Baltimore to study painting at MICA. In the ensuing years, he has been a restless, self-reinventing artist continuing to develop his visual art and performance practices, hosting popular DJ sets, as well as playing and recording with bands like F City, Flo, and, of course, the Senators. It’s exactly what one might expect from an artist named Landis Expandis.

His newest project, the pandemic-born Landis Harry Larry, merges his music and visual art practices. The trio of musicians—all performed by Expandis—create lively, timely synth-based music about both quotidian and existential concerns. The flashy, fantastic videos Expandis creates for the Landis Harry Larry YouTube channel have gained a loyal following that found a home for a Landis Harry Larry special on the Night Flight channel.

After an initial album release and a successful live Landis Harry Larry show with a full band last summer, Expandis is ready to take the stage again on July 24, when the LHL Band performs a free show at the Patterson Park Observatory. Because Expandis is immunocompromised, he’s no longer able to perform inside the clubs where he made his name.

“It’s tricky because I have to perform outside,” he says. “Everything depends on whether it’s raining that day. I can’t get mad at the rain; I’m mostly water myself. So it means fewer shows, and that’s why I’m glad there’s the digital world.”

Expandis found the pivot to video a unique challenge. Shifting from live to mediated audiences, he found himself in competition with the algorithm.

“Artists have to compete with content,” Expandis says. “There’s always content, people that take clips from somewhere else and react, and then there’s an artist on the same platform, putting up something that took them weeks to make. And it gets the same reaction: a like.”

When the pandemic descended, Expandis had a full schedule of performances—and suddenly that slate was wiped clean.

“I have a lot of friends that did die that first year,” he says. “I started to panic and consider that this was happening to everyone at the same time. I sat down and began to think, that’s it.”

As gigs fell away and performing artists started to try to figure out how to keep making a living, Expandis began offering online painting tutorials to replace some of his lost income.

“A while ago I traded a normal life to be able to do art. It was an either/or. I couldn’t deliver pizzas and also come home to make art. It would sap my energy,” says Expandis. “It’s a hard trade to make but if you’ve been doing art all of your life, it’s your first language. You kind of have no choice. You have to be who you are.”

Ever the re-inventor, Expandis began learning to make music and layer video with an iPad his partner, Freda Mohr, gave him. In short order, he launched a YouTube channel with a song called “Survive,” featuring the trio that would evolve into Landis Harry Larry.

“Harry and Larry didn’t have names yet, but they were there,” Expandis says. “It’s not a happy video; it’s really raw and if you look in my eyes, I’m scared to death.”

As the personalities of Harry and Larry began to take shape, Expandis began to incorporate humor into the music, and songs about the “new normal” emerged. “Cats in the Way” addressed the struggles of working from home with pets in the mix, and “Back the Hale Up” became an anthem for social distancing.

“Harry and Larry are aspects of my personality that I keep close,” says Expandis. “Everyone has different aspects of their personality. If you ever sit and talk and then answer yourself—where did that come from? They came from two different directions. Everyone does it. I just gave them names.”

The differences become apparent in the solo albums. Larry is the experimental musician, the quiet type who lets his keyboards and circuit benders do the talking. Harry is the songwriter in pursuit of the polished pop hit, while Landis serves as the flamboyant frontman, taking a turn towards a harder, more gothic sound—a sharp shift away from the funk for which he’s been known for much of his career.

Expandis’s pandemic adaptation is part of an established history of artistic resilience, riding the line between success and tragedy in pursuit of art. In the ‘90s, as the All Mighty Senators began to get noticed outside of Baltimore, he found himself unhoused.

“I was homeless when the Senators blew up. After running out of money to put myself through MICA, things went downhill really fast. I lost my job; I lost my apartment. I slept on as many couches as I could until my pride got the best of me,” says Expandis.

He learned quickly how to navigate living on the streets of Baltimore. “Good thing it was summer and I still had lots of friends. I went to the [Mount Royal] Tavern every night and got somebody to buy me a beer,” he says. “But little did they know, after that I’d grab my bag and walk the Baltimore streets until the sun would rise and then find a bench to sleep on.”

It wasn’t long until he found lodging at Hour Haus (now the building that houses the extended Artist & Craftsman Supply in Station North) and stabilized, but he wouldn’t finish his degree until 2017, completing the digital design program at Harford Community College.

While he is probably best known in town for his music, Expandis’s prolific painting career has continued to blossom in the pandemic, merging his own palette and surreal humor with the influence of masters like Matisse and Van Gogh.

“I love looking at painting so much. I feel like I’m at a rock concert when I go to the museum to see paint strokes live that that artist made, and they’re not here anymore,” says Expandis. “It’s just as loud to me. It’s like watching a KISS concert.”

The merger of Expandis’s visual style sets a fantastic atmosphere and an extensive backstory for the world inhabited by Landis Harry Larry, which includes Moth Man, who is a DJ, and Bunch, a dog who became humanoid after a freak lab accident. Bunch has become such a popular character that he will soon have his own YouTube show, Supe O Weird O, which will showcase esoteric music videos.

The Landis Harry Larry world-building has been so prolific, but remains largely self-directed.

“I would love to find a production team so that I could make all of this happen without doing it all myself. I’d like to say, hey, animation team, can you come up with a show? That’s the overarching dream,” says Expandis. “But right now, it’s my pen in my hand.”