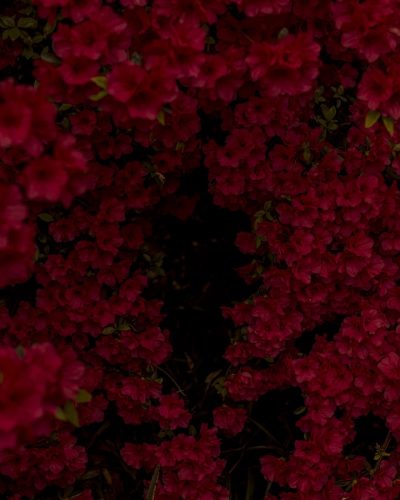 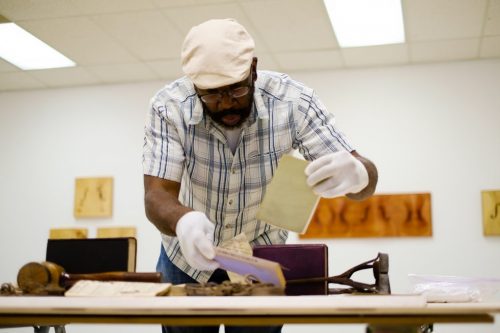 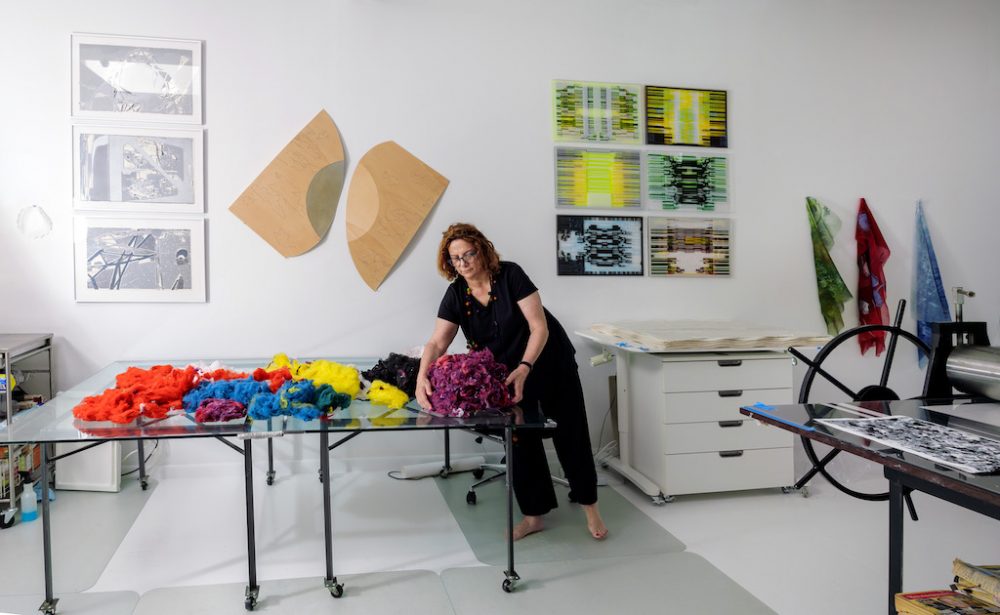 The challenge for artists like Soledad Salamé, deeply knowledgeable and concerned about climate change, is addressing human psychology. Setting aside the climate deniers, already beyond the pale, the average human being has a tenuous grasp of the long-term, global environmental picture: “thousand-year” floods that come every year, agricultural land that has become dust, and oil-spill contamination that can never really be cleaned up. “Fast fashion” from the Global North becomes landfill in the Global South.

Climate refugees are already here. Government aid and immigration policies have not caught up to the reality of rising ocean levels, systemic drought, and accelerating weather patterns that invariably impact some—low-income, rural, people of color—more immediately than others. Climate change is a social justice issue, and not just bad weather. Salamé realizes that visual artists have a vital role to play in facilitating comprehension of an existential issue in order to promote decisive action.

For decades, Salamé has been researching and creating subtle, intelligent artworks around these issues. In more recent years, her urgency to convey the message has increased. Coastal cities such as Baltimore, her longtime home, are already endangered by rising sea levels, as she demonstrated in the 2009 interactive installation Where Do You Live? 3,000 Miles of Maryland Coast. Collaborating with other artists and scientists, Salamé printed images from Google Earth to create a monumental, light-up topographical map of the Chesapeake Bay, indicating which places will be flooded first, and which Superfund sites will be inundated, spreading contamination when the water comes.

Climate change is a social justice issue, and not just bad weather. Salamé realizes that visual artists have a vital role to play in facilitating comprehension of an existential issue in order to promote decisive action.

On-site research and documentation are often the beginning of Salamé’s process. Using photography as her method of note-taking, the artist returns to her home base to devise her next form of experimental printmaking, painting, sculpture, or new media, pursuing the technology needed to carry out her concept. Image distortion is a throughline in Salamé’s work, representing the disruption of nature and social order, an aesthetic that draws connections between science, technology, and nature.

When the BP Deepwater Horizon oil well explosion overwhelmed the Gulf Coast in 2010, she and Michael Koryta, her partner and frequent collaborator, set out for Louisiana to investigate. Using a technique developed in the earlier exhibition Fax (2009, at The Contemporary Museum in Baltimore), Salamé transmitted and pixelated her digital photographs from the coast via a fax machine. The mylar prints were then layered and incised, using interference pigments to create a shimmering, iridescent image, offering a seductively beautiful surface that belies the disturbing content: documentation of one of the most destructive oil spills in history.

Installed as a grid, the resulting silkscreen series Gulf Distortions (2011) reads as a history of environmental degradation. The top registers depict the calm beauty of the original marshes and estuaries, gradually overcome by an oppressive jumble of shrimp boats, and then oil refineries. These fractured landscapes convey a disquieting sense of disrupted nature underlaid by psychological unease. Previous silkscreens such as Barcodes (2010) have contrasted the technologically reductive data systems of barcodes and DNA coding with the complex patterns found in the natural world. For Salamé, distortion of the image reflects the fear of dehumanizing and delegitimizing the real-world phenomena occurring around us.

By 2017, the disinformation and trauma surrounding immigration during the Trump administration motivated Salamé and Koryta to take to the road again, this time to witness the reality of the humanitarian crisis at the Rio Grande. They crossed the US-Mexico border several times, noting human and economic devastation on both sides.

The installation We the Migrants: Fleeing/Flooding, exhibited at Goya Contemporary in Baltimore in 2019 (and later in Houston at the Transart Foundation and Galeria NAC in Santiago, Chile), is more blatantly political than previous work, spelling out the often-overlooked connection between Central American immigrants and the climate changes forcing them to flee their formerly arable land. Migrants posits stacks of papers printed as newspaper and journal front pages, accentuated by embroidery, juxtaposed with delicately etched, folded glass.

The incised text can only be read as shadows, cast obliquely on the wall, serving as a metaphor for the daily distortions of the seemingly transparent news. The migrants’ existences are as fragile as glass. The opportunity of the Global North to respond is fleeting, as ephemeral as the daily paper.

As an immigrant herself, Salamé identifies with these refugees, whom she sees as reduced to barcodes, dehumanized by our governmental policies and media coverage. Born in Chile, Salamé relocated to Venezuela with her family in the 1970s, then to the US in the 1980s.

Much of the text in the Migrants series underlines the theme of social justice as tied to the evolving environment, where “Green is becoming brown” and “White is becoming blue.” Salamé explains, “I targeted migration through both sociopolitical and environmental aspects because what is coming will be a challenge for every nation in the world: the war for natural resources!”

Salamé’s most recent project, Atacama, required a return to Chile to explore a little-known sub-topic about resources, natural and otherwise. The Atacama Desert stretches for a thousand kilometers; its hyper-arid climate and remoteness make it the ideal location for studying space exploration, through telescopes and Earth-to-Mars voyage simulations. But it wasn’t always that way. Its pre-Columbian woodlands were deforested by the fuel demands of the 18th- and 19th-century silver and saltpeter industries, gradually making the region uninhabitable, serving as an early glimpse of the Anthropocene era to come.

ALMA, a previous series of prints and reliefs using imagery from the Atacama telescopes, drew on Salamé’s fascination with astronomy, but her latest series unveils a “fast fashion” disaster in the making. Each year, tens of thousands of tons of discarded clothing from companies in developed countries like the US are shipped to Chile, among other less-developed countries. After sorting, some textiles are recycled into useful products such as yarn and wall insulation. However, most are dumped in the desert, creating a vast landfill. On site, Salamé observed both the spectacle of migrants who have crossed the desert from Venezuela and Bolivia, and enterprising recyclers, combing through the mountains of discards for anything valuable, rescuing the most useful, natural fabrics.

Picking up on this positive thread, Salamé is working to transform some of these cotton and linen fibers into paper that could have various applications, completing the cycle, which is what recycling is all about. Salamé recognizes the dire reality of the climate crisis and its role in socioeconomic disruption, while at the same time searches through heaps of disastrous portents to extract glimmers of possibility.

Artist activism can take many forms, from raucous agitprop (such as lying down in rush-hour traffic or gluing oneself to a Botticelli) to the subtly provocative, experimental artworks demonstrated by Salamé. She brings to her art-making process not only the perspective of a Latin-American woman, but also her invested research and the act of bearing witness. Rather than aligning with past successes, her practice is constantly evolving, laying open the plight of immigrants and environmental catastrophes both unfolding globally and right at home. While she knows that these issues require urgent action, Salamé takes the un-polemical path, inviting viewers to reflect, and feel it for themselves.

For more information about the artist, head to Goya Contemporary Gallery in Baltimore.

Photography by Michael Koryta except where otherwise noted. Images courtesy of Goya Contemporary and the artist.

This story is from Issue 14: Environment,