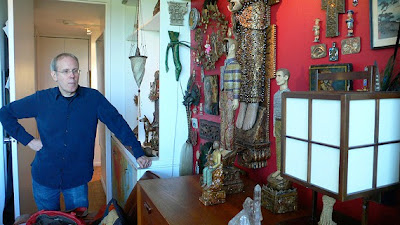 Richard Cleaver’s studio, tucked into a former bedroom in his Tuscany-Canterbury apartment, is a tidy jewel box stuffed full of intricate ceramic figures, freshwater pearls, Swarovski crystals, and all sorts of religious tchotchkies. The winner of one of this year’s Baker Artist Award $25,000 prizes, the multimedia sculptor has also been a finalist for the prestigious Sondheim Award and is a former winner of the $10,000 Trawick Prize. Each of Cleaver’s pieces is an exercise in sensory overload: his ornate towers of tiny gilded people, deities, and animals are simultaneously dazzling, self-deprecating, and sacred. In June, we sat down to discuss his inspirations, his childhood, and his day job working with theater costumes.

Cara Ober: How and why did you come to Baltimore?

Richard Cleaver: I am originally from New Jersey. I never intended to come to Baltimore, and I never actually intended to be an artist. I had no idea what I wanted to do back in high school, and I didn’t think much about it. However, I was bored a lot in school and I began skipping one day a week in order to go to the Philadelphia Museum of Art. I don’t know why I went there, but I loved it so much. One of my teachers discovered what I was doing. She changed my life. She was a concert pianist, an unusual and educated, cultured person. When she found out where I was going, she actually figured a way for me to get independent study credit for it. I had no idea that people actually studied art until that point.

To read the whole article, go to: http://www.urbanitebaltimore.com/baltimore/jewel-box/Content?oid=1274932.