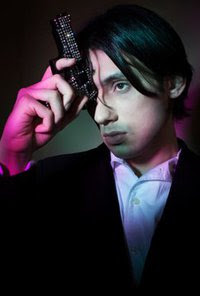 JOSEPH KECKLER
Joseph Keckler is a singer and writer-performer who is originally from Michigan. His concerts and plays have recently been presented at The New Museum, Joe’s Pub, Ars Nova, HERE, La MaMa ETC, Dublin Fringe, and in Baltimore’s Transmodern Festival, among others, and his performance texts (in collaboration with Erin Markey) have been explored in the Lincoln Center Directors Lab. His EP, Featured Creatures was recently released in Italy by Transeuropa. He curates a salon at NP Contemporary Art Center and his work will be featured in the upcoming exhibition Let It End Like This at apexart. He is currently working on a new solo show, various recording projects, and a collection of his stories.
www.josephkeckler.com

Ric Royer is a writer, performer, writer of performances and performer of writings. He currently lives in Providence, RI. www.ricroyer.com

LISA LEAVERTON
Lisa Leaverton, playwright & collaborative artist is pleased to return to The 14kt Cabaret after a long spell, since the days of performance band, Pinky, with Nancy Andrews. Correctionville will be presented in FURYfactory Festival in San Francisco in June. Her work has been partially digested by audiences in Portland, New York, Seattle, Cedar Rapids, and Philadelphia. Lisa will present snatches from a new work in process, suggestions from correctionville. “Where are the hands holding the spoons…” – lisaleaverton

The show starts with a few short films by:

ANN EVERTON
Ann Everton is a Baltimore based artist, working primarily in video. Ann will show work from one of her current projects, “Bill Murray Life Lessons”–an ongoing project exemplifying alternative avenues towards self-betterment through recreations or reinterpretations of every film in which Bill Murray appears. We will see scenes from “Meatballs”, “Stripes”, “Little Shop of Horrors”, and “Groundhog Day” (starring Brian Daniloski, Ann Everton, Onnie Monter, and Nikki Smith).
anneverton.com
*

To maintain sanity, I escaped a lot to the wilds of the shore, particularly Assateague Island.

News & Opinion
After MICA Faculty Vote No Confidence, Board of Trustees Announces Support of President Hoi and a Pledge to Implement Changes
Among so many ever-louder calls for accountability and change across the country, MICA faces a critical moment

MICA faculty assert that the pandemic has magnified longstanding problems, and the Board of Trustees responds