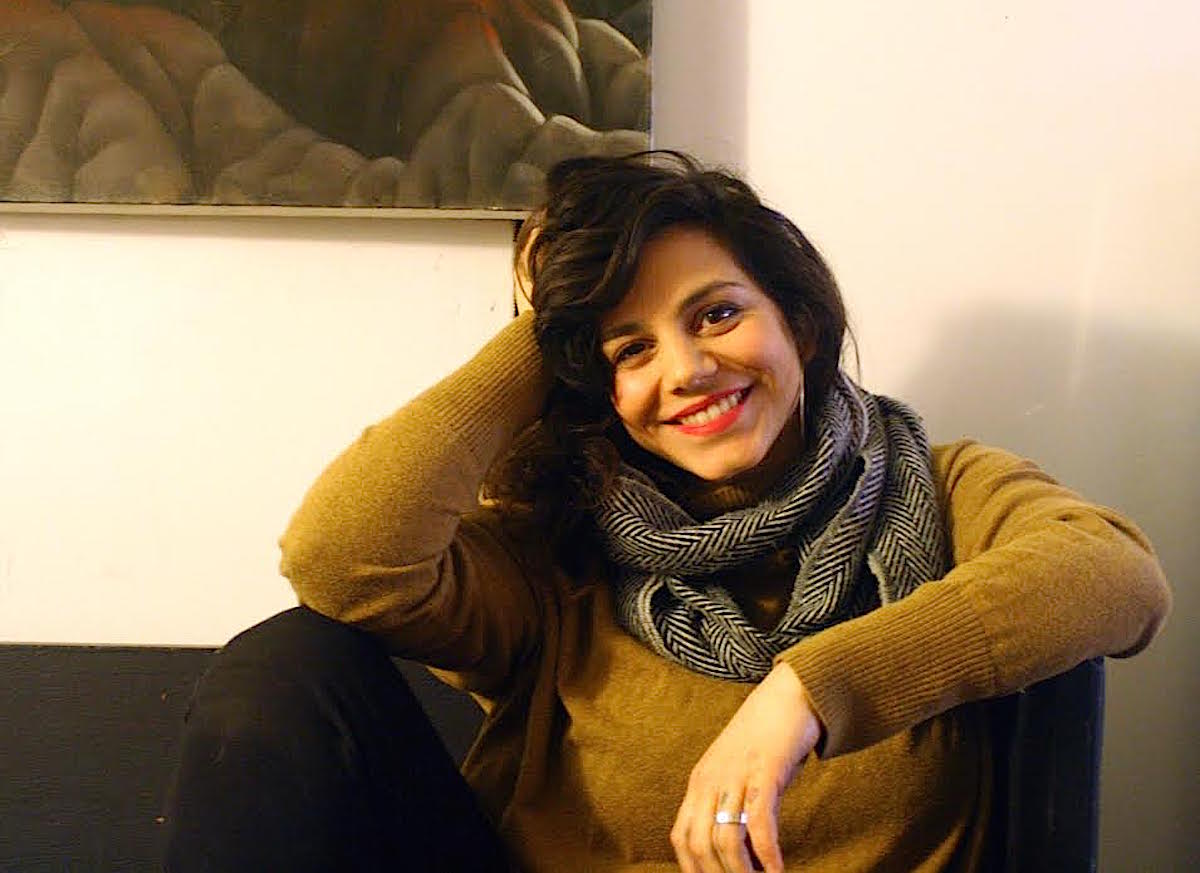 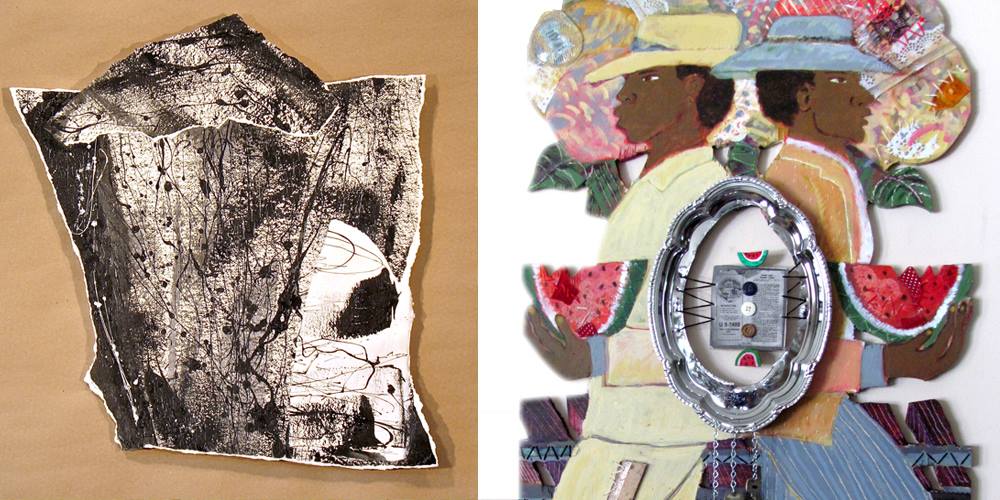 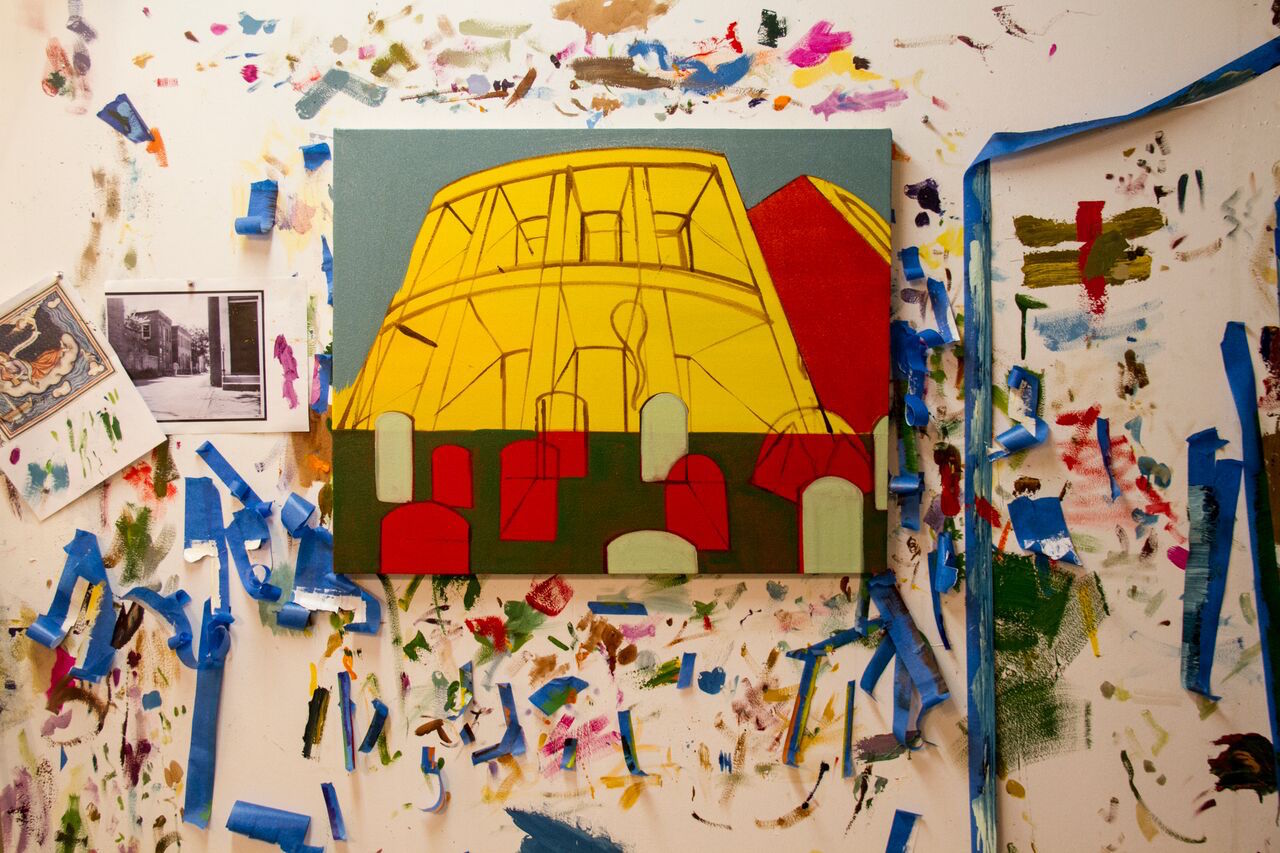 A Conversation with Matthew Mann by Paul Shortt

Matthew Mann is a painter who mixes landscape, animals, and architecture motifs with the history of painting in exploration of contemporary visuality. His paintings often include multiple landscapes, perspectives and atmospheres creating new worlds for viewers to engage with. He has had solo exhibitions at Project 4 Gallery and Hamiltonian Gallery in DC, and participated in group exhibitions in Philadelphia, PA, San Francisco, CA and New York City, NY. He was a 2011-13 Hamiltonian Fellow and has been making artwork in DC for the past 15 years.

Paul Shortt: Your recent body of work, Twee Brutalism, merges issues of Brutalist architecture and place with a primary coloresque palette. Can you talk a bit about this work?

Matthew Mann: I started working on the Twee Brutalism series about a year and a half ago around the time that a giant hotel was being built next door to my studio. The hotel itself is an unremarkable corporate looking thing, but given its resemblance to a lot of the condos going up around DC, and in a lot of other cities too, it struck me as a kind of aesthetic brutalism. On its own, Twee Brutalism is a satirical paradox that pretty much sums up my attitudes about how architecture is currently deployed in DC and many other cities: bland, retail oriented, lifestyle branded developments displacing another, and worsened when appropriating a community, social, or cultural landmark as a marketing ploy.

And thinking about the power of architecture and how it has been used historically to communicate power, civic priorities, and the like, I realized that these more banal aesthetic instances of condos/hotels are communicating priorities and power too. The simpler color harmonies within the architectural motifs help signal this kind of anodyne, devitalized tweeness, I think. But I also use a greatly reduced color palette too.

Architecture is often on my mind anyway. I have wanted to leverage analogous aspects of architecture and painting like the layering of space, layering of experience, and forced perspective as a way to get some corporeality into the paintings. And since, to me, these architecture-cum-painting ideas reverberate through the history of painting/images and into our own haptic and screen based perceptual experiences, I thought it was a good time to start putting these paintings together.

Weather and the time of day also play a part of these paintings with multiple sunsets and times of day present. Can you talk a bit about these elements?

Weather and time of day are how the environment is honed in the paintings.The weather is most often partly cloudy. Read into that as you like. The cloudy weather is mainly for my own pleasure as a lover of clouds, both real and imagined… the patron goddesses of idlers according to Aristophanes. The clouds contribute to some sense of foreboding, while formally balancing visual activity in the painting along with grasses, water, animalia and the paint material itself.

John Constable once said that one should be able to predict the weather from his paintings. I don’t personally subscribe to this at all, but that line is often on my mind as I am thinking about how to incorporate weather into a painting.

Time of day is often either the beginning or the end, it is fairly ambiguous and color dependant, but ends up having its own psychological impact. But I like to think that if the time of day is both beginning and end, hopefully becoming an eternal present within the context of the painting. Time is also color dependent in the paintings too.

Color has an indeterminate spatiality that gets at my other pictorial priorities, while also piquing emotional response. In this case the color harmonies get a little more complex, balancing (or unbalancing) tonalities and saturation. The skewed and multiple horizons that sometimes appear are as a way to add a bit of disjointedness and seriality, while installing a little glitch that ricochets around in the painting. Your current studio is located in the Union Arts Building which is planned to become a hotel. Can you give us a little history into the current fight to keep this building art studios?

This Union Arts situation is sort of like Twee Brutalism incarnate. The proposed hotel is actually supposed to be an “‘art themed’, boutique hotel”. This is a bit of salt in the wound to the people who have been making work there, some of whom have been active there since the 1980’s.

This is worsened by Cultural DC’s (they drafted the proposal for the developers) reduction to 7 or 9 studios -from 30 or so- and adding some flex space, some rehearsal space maybe, that we can re-apply for through Cultural DC once the facility is completed.

It takes away a big cultural amenity for audiences of music, performance and even startups as well as visual artists. Not great.

Without getting into the weeds about it, the developers need a zoning change and an alley closure in order to move forward with their project. This means that they have to go through the Zoning Commission and the Office of Planning to get these easements which involves public weigh in and so forth. So, we the tenants, as well as the larger community of artists and musicians who will lose yet another venue, have been weighing in pretty heavily.

Given that, we have now begun discussions of relocation and relocation assistance with the developers, after about a year of their ownership and a few months of our public testimony to the DC Zoning Commission and other advocacy events. How has this affected your painting process?

In a way that I didn’t expect, actually. Initially the Twee Brutalism paintings were more generally involved with aesthetics and architecture and the stratification of places and history, having more to do with exteroception of built environments and appearances.

After this Union Arts ordeal you begin to realize that issues of adaptive artist-use spaces and their preservation are braided into the whole dilemma of affordable housing, and affordable space in general. This really refocused the research to include cycles of eviction, place making, economic displacement, opportunity, and poverty. Space has increasingly become an issue in DC and as a painter you don’t have too many options outside of traditional models to show your work. Has this affected how you paint?

If by traditional models you mean commercial galleries, then yes there has been a contraction and dispersal of venues over the past 5 years in DC. But there are still public and private venues for painting, and artist run spaces, mostly these are out of town, but that’s okay too. More worrying for me is the work space situation. And the shift-oriented/coworking/pop-up sort of model that is coming in to replace stable workspace in DC is ill suited to processes, like painting, that have a different duration built into their production and market.

How I paint though has remained unchanged. Some new techniques like silkscreen and arcane masking techniques in photography have been brought into the work. But otherwise it’s still just me adapting, trying to figure things out, and following ideas as they evolve into other ideas. What exhibitions do you have coming up?

On April 23rd Hamiltonian is hosting an open studio with me in the Union Arts building as part of their Understanding the Arts series of studio visits.

Otherwise a selection of the Twee Brutalism paintings are going to be part of a group exhibition called Strange Landscapes at Arlington Arts Center that Karyn Miller and Blair Murphy are co-curating from June 22-September 24, 2016.

Author Paul Shortt is a visual artist, writer and arts administrator. He received his MFA in New Media Art from the University of Illinois at Urbana-Champaign and his BFA in Painting from the Kansas City Art Institute. He was formerly the Registry Coordinator and Program Assistant at Maryland Art Place. He is currently the New Media Curator for Arlington Cultural Affairs in Arlington County, VA and lives in Washington, DC.