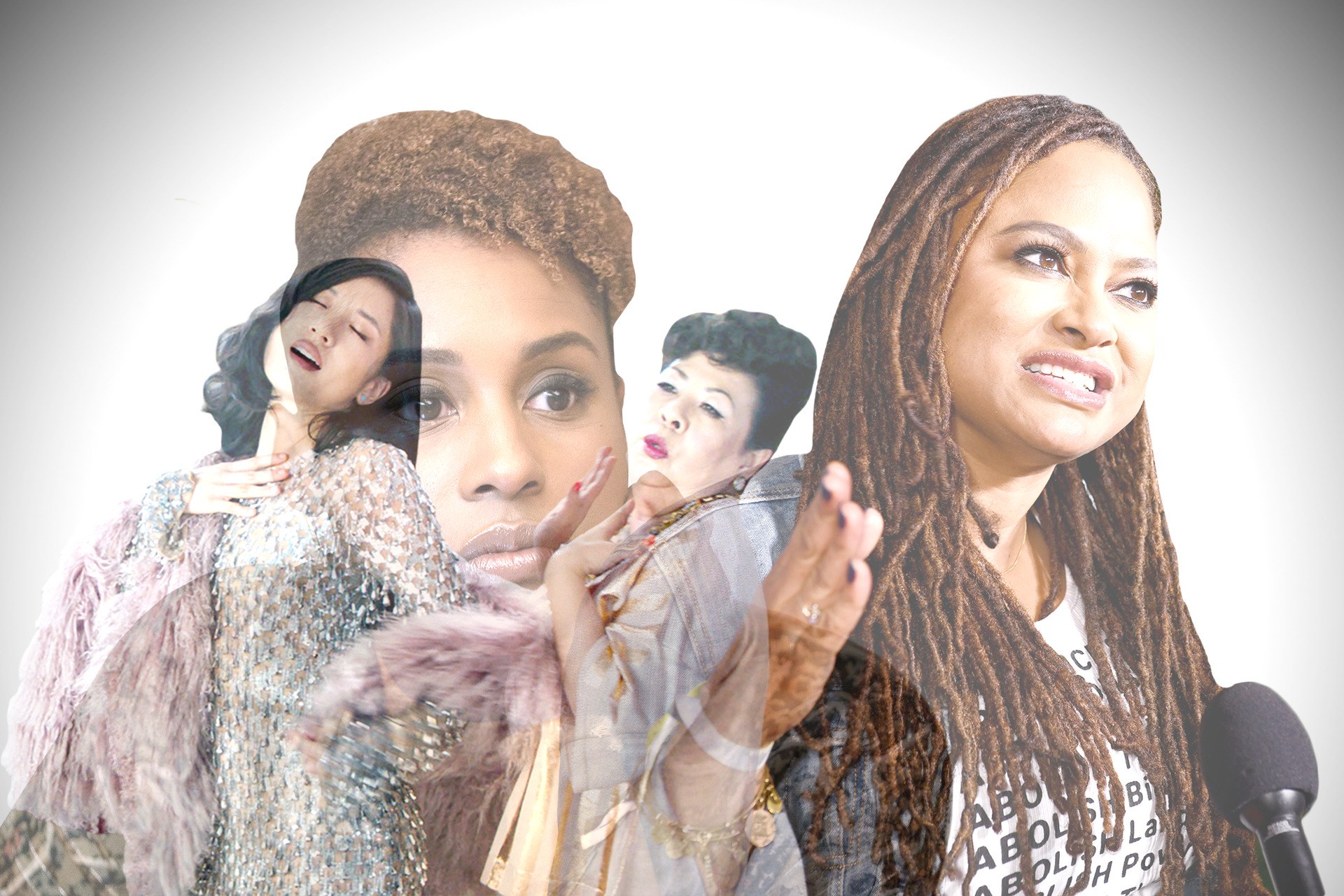 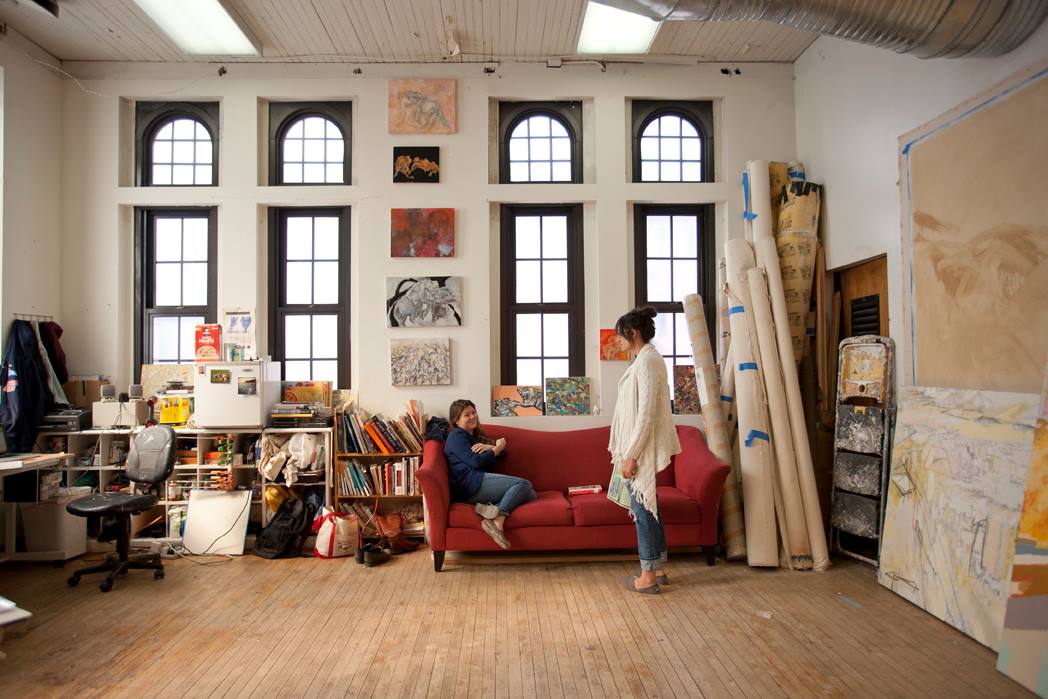 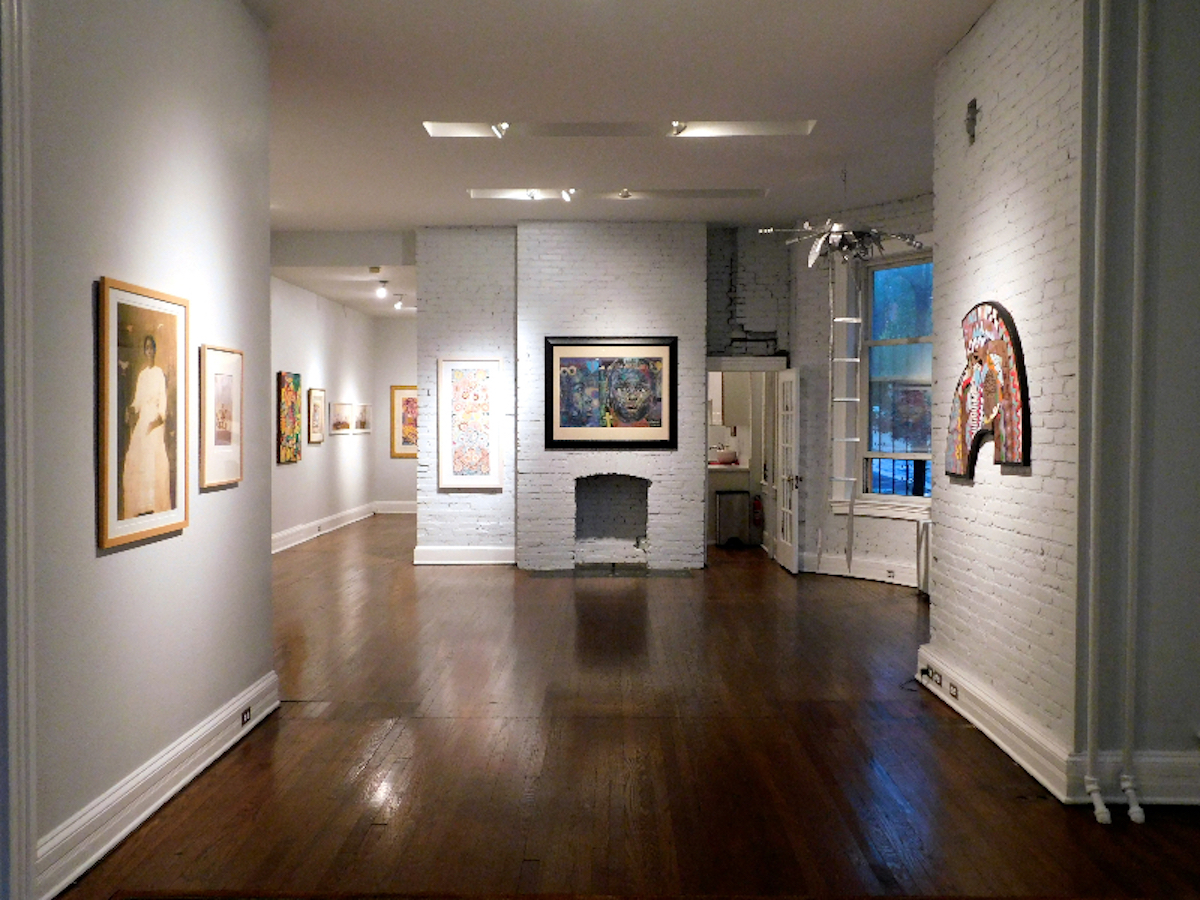 AfriCOBRA: The Evolution of a Movement at Galerie Myrtis by Angela N. Carroll

“And then the dreamer’s dreamer had his balloon busted on a Memphis motel balcony. And that was the last balloon. And it was Chicago again and Harlem again, and San Francisco and D.C. and Cleveland and everywhere. And COBRA was born. And Law and Order. And off the pig. And we angrily realized that sleepers can die that way.”- Jeff Donaldson

This year marks the 50th Anniversary of the African Commune for Bad Relevant Artists (AfriCOBRA), a collective whose rapturous imagery and uncompromising political proclamations have galvanized the spirits and psyches of African Americans for generations.  Compelled by unrelenting racial violence against Black liberation efforts across the U.S. and around the world, and the untimely assassination of Civil Rights leader Dr. Martin Luther King Jr. in 1968, Jeff Donaldson, Wadsworth Jarrell, Jae Jarrell, Barbara Jones-Hogu and Gerald Williams formed COBRA, Coalition of Black Revolutionary Artists. With the addition of Napoleon Jones-Henderson and Nelson Stevens, COBRA became AfriCOBRA.

Donaldson wrote in the seminal essay 10 in Search of a Nation that a major goal of the collective was to “strive for images inspired by African people/experience and images which African people can relate to directly without formal art training and/or experience.” AfriCOBRA has maintained that charge and continues to render exquisite, complex and affirming reflections of Black life. 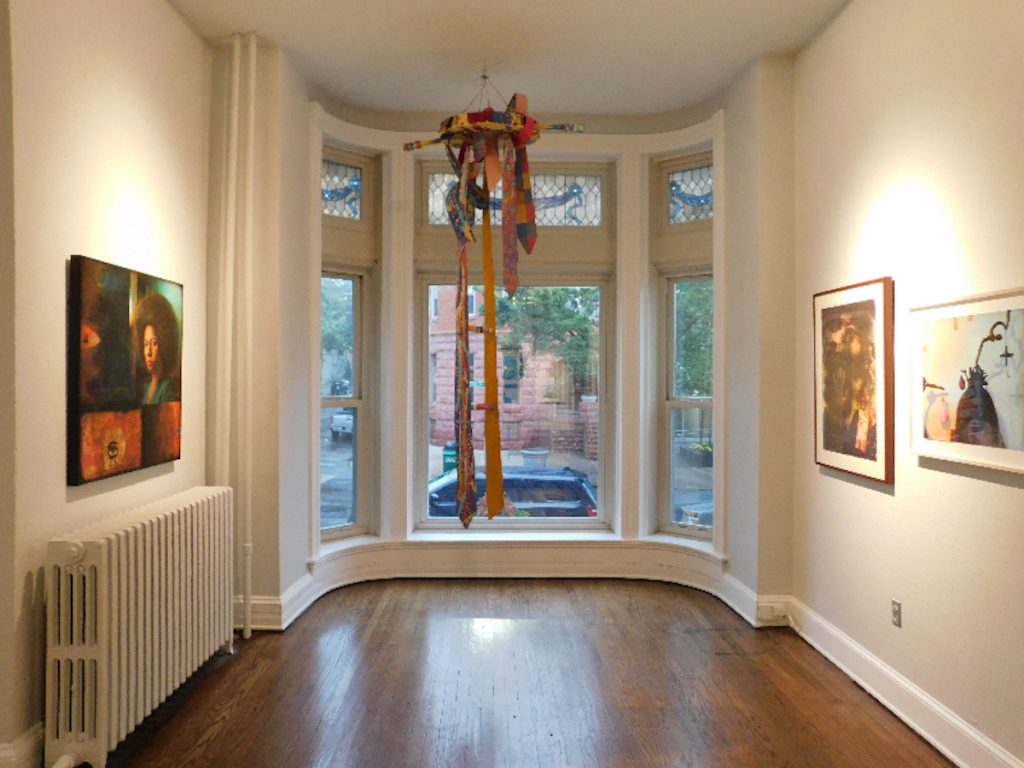 AfriCOBRA: The Evolution of a Movement, a group retrospective at Galerie Myrtis, exhibits a broad selection of recent works from two of the collective’s founders and several of its later members.  The selections featured in Galerie Myrtis are a fraction of the groups prolific body of work. In honor of the anniversary other notable galleries and museums including Kravets Wehby Gallery (NY), the Brooklyn Museum (NY) in collaboration with the Tate Modern (UK), and the Kavi Gupta Gallery (Chicago) are concurrently exhibiting their own retrospectives.

Inspired by the breadth and historical importance of AfriCOBRA on the Black Arts Movement and contemporary art in general, Curator Myrtis Bedolla noted that, “[AfricCOBRA] are bold and creative intellectuals whose aesthetic principals and philosophical concepts help shape artistic activism. Their imagery and messaging which spans 50 years continues to be relevant and inspirational.” 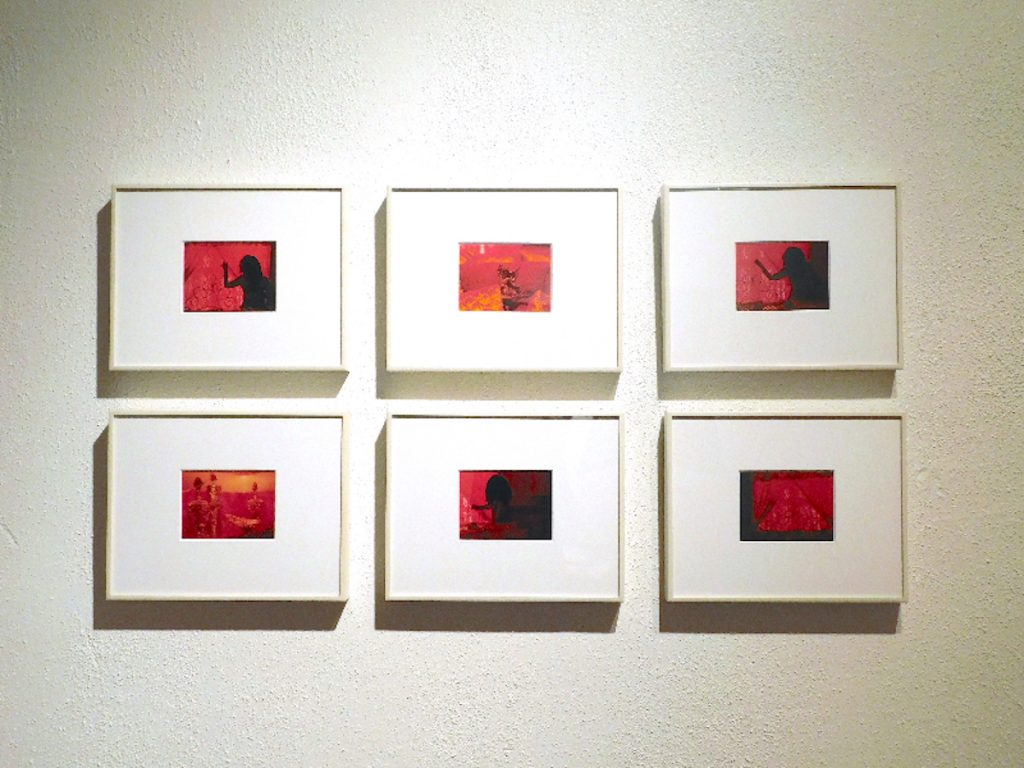 Angela Carroll: Why do you believe the imagery and messaging of AfriCOBRA has remained relevant?

Nelson Stevens: Because the problems are still with us. We are in the place where Emmett till got killed. He was about four years younger than me and living in Chicago and visiting Mississippi and killed for whistling to a white girl. My forte is exploring the physiognomy of Black folks here and now. I am interested in that particular spirituality and attributes of blackness. In 1969 I graduated from Kent State University with an MFA in art. I went to the College Art Association Conference looking for a job because prior to that I was teaching Junior High in Cleveland and at the Cleveland Museum of Art.

I met [Jeff] Donaldson at the College art Association Conference and he was excited to see my art and I was excited to [see] his, because I hadn’t met him before but I had read his name and knew he was one of the founders of The Wall of Respect which was made two years earlier in 1967 Chicago at 43rd and Langley Ave. Me and my family moved to the area, when we did he called and asked if I would come to a meeting. There I met several other artists who were extremely proficient and had an ideology as to how to use their particular skills towards advancing Black people. In Cleveland the skill level was very high, but the political level was lacking. I was really excited to meet other artists who were thinking seriously along the same lines as I was. 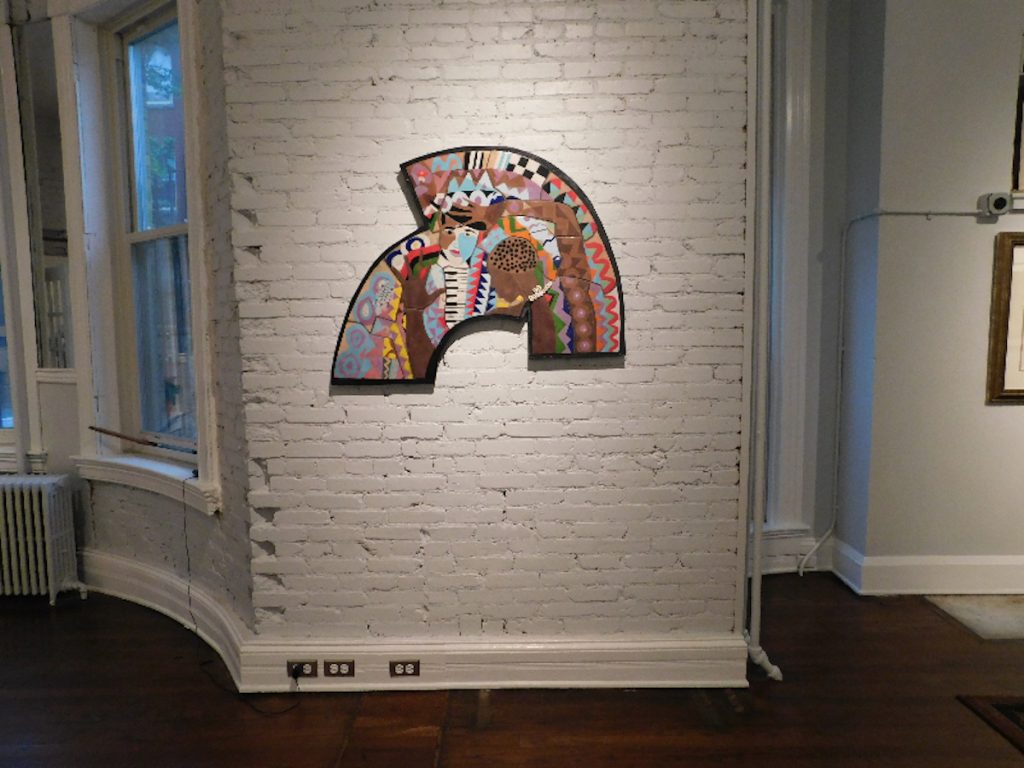 AC: Renee, you have been creating work independently for the last few decades. What prompted you to join AfriCOBRA at this stage in your career?

Renee Stout: I’m not really a group person. I was invited by AfriCOBRA a couple of years ago, but it was really formalized last year in 2017. I felt that in the context of art history it would be a good thing to have the group continue and grow and evolve. I thought [about] new members whose work does not necessarily look like AfriCOBRA but does have a certain veracity. That made me decide to join when I was invited.

AC: Black pride is a powerful and recurring sentiment in AfriCOBRA. Nelson, your portraits exude an ecstatic quality. The way you layer your dots or lines of color that etch and cut through the frame, and function like highlights against astral black skin is stunning. Your mark making reminds me of free-jazz movements from the 1960s and some of the sonic and performative work of artists like Sun Ra and Amiri Baraka.

NS: You’re quite right. I had already run into Amiri Baraka and got encouragement from him as well as Larry Neal. Along with Amiri Baraka, they were the two architects of the Black Arts Movement. I met them before I met Jeff who was part of COBRA, Coalition of Black Revolutionary Artists. There was another collective in Europe with that name. We were meeting on Sundays for 5-7 hours presenting our art and learning how to critique the art without critiquing the person. Of all the cities across the U.S, Chicago was a place that allowed AfriCOBRA to come into conception because of the Southside community center and the leadership that was there, Margaret Burroughs. 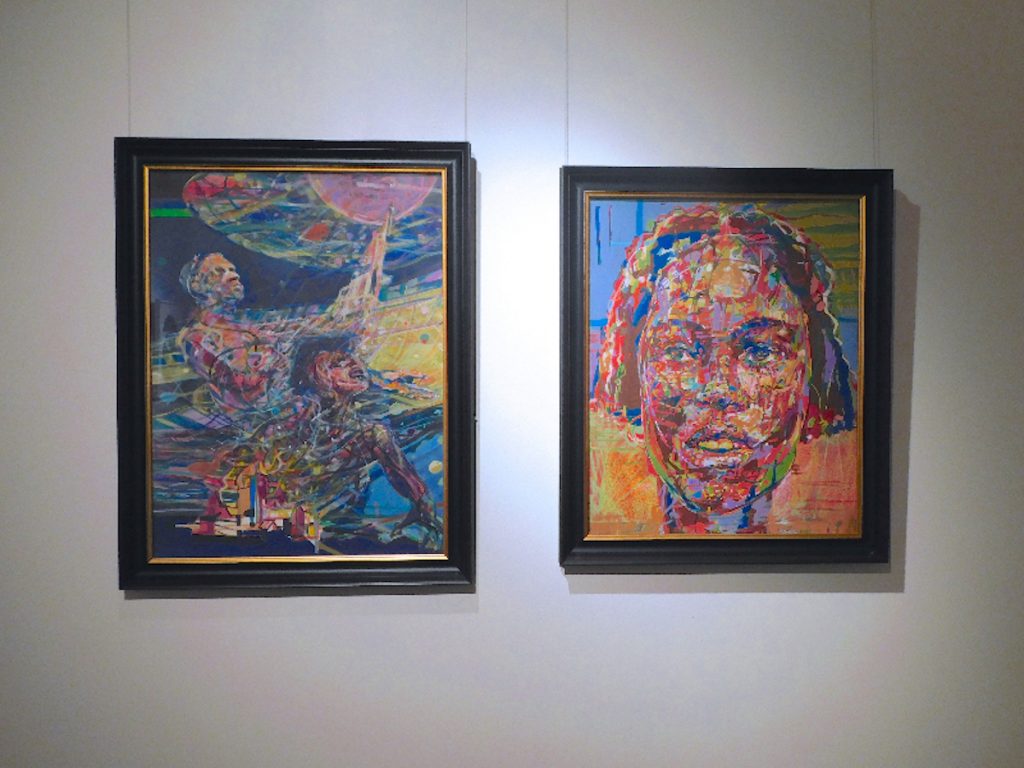 AC: That history is so important. What other artists influenced the AfriCOBRA aesthetic?

NS: Nobody was doing what we did, but we were always aware of a person like Bearden, Jacob Lawrence or Charles White, one of my favorites because of his draftsmanship. He was my greatest drawing teacher. Anyone studying 20th century collage knows Bearden. We didn’t create what we knew out of an ignorance of what others were doing. I’ve always taught a class in “Black art” or African Art in the new world, or Aesthetics of African Art.

When I first started teaching there was only a book by James A. Porter, that was it. We had pamphlets and brochures, but constantly I would get problems from the Art History department for giving credit to a course that didn’t have a text. In 1968 I was a graduate student in a summer program. That was a summer of a lot of violence but it was also the summer when the Democratic National Convention was in Chicago. A lot of my fellow students were two or three years younger decided to go to figure out what was happening. The teacher who was in charge of the program was a great colorist, a pop artist who used to teach us there was no color unless there was a comparison. While they were gone I absorbed everything that he was teaching, in a one-to-one teaching relationship. He was influenced by the Bauhaus School. I was fortunate to have that kind of background and education.

AC: Speaking of aesthetic, Renee, can you talk about how you believe your work which pulls from African diasporic folk and spiritual traditions aligns with AfriCOBRA’s style and mission?

RS: I think that while AfriCOBRA is a celebration in a certain kind of way, I am mining traditions that people are afraid of. It’s not hard to find information about what my symbolism is. In the Black community we don’t openly celebrate the things that are a part of our heritage. The fear is that because we live in a nation that has decided it is a Christian nation, those traditions are hidden, and people are fearful. I’m not being fearful of it. It’s out in the open. I’m celebrating another facet of our culture that doesn’t get to see the light of day as much.

AC: Nelson, your background in printmaking is really apparent in the way you approach painting.  The graphic style reminds me of Emory Douglas and also Charles White.

NS: Emory Douglas cannot be understated. He is pretty much out there by himself, in one column, making the pigs look like pigs. [laughs]. He’s a hero. I only met him once to shake his hand. I tried to thank him for what he had done but there was a big crowd around him and we never had a really good conversation. But Emory Douglas cannot be denied. He is fantastic.