In “Perilous Bodies,” International Artists Pull Up the Roots of Intolerance 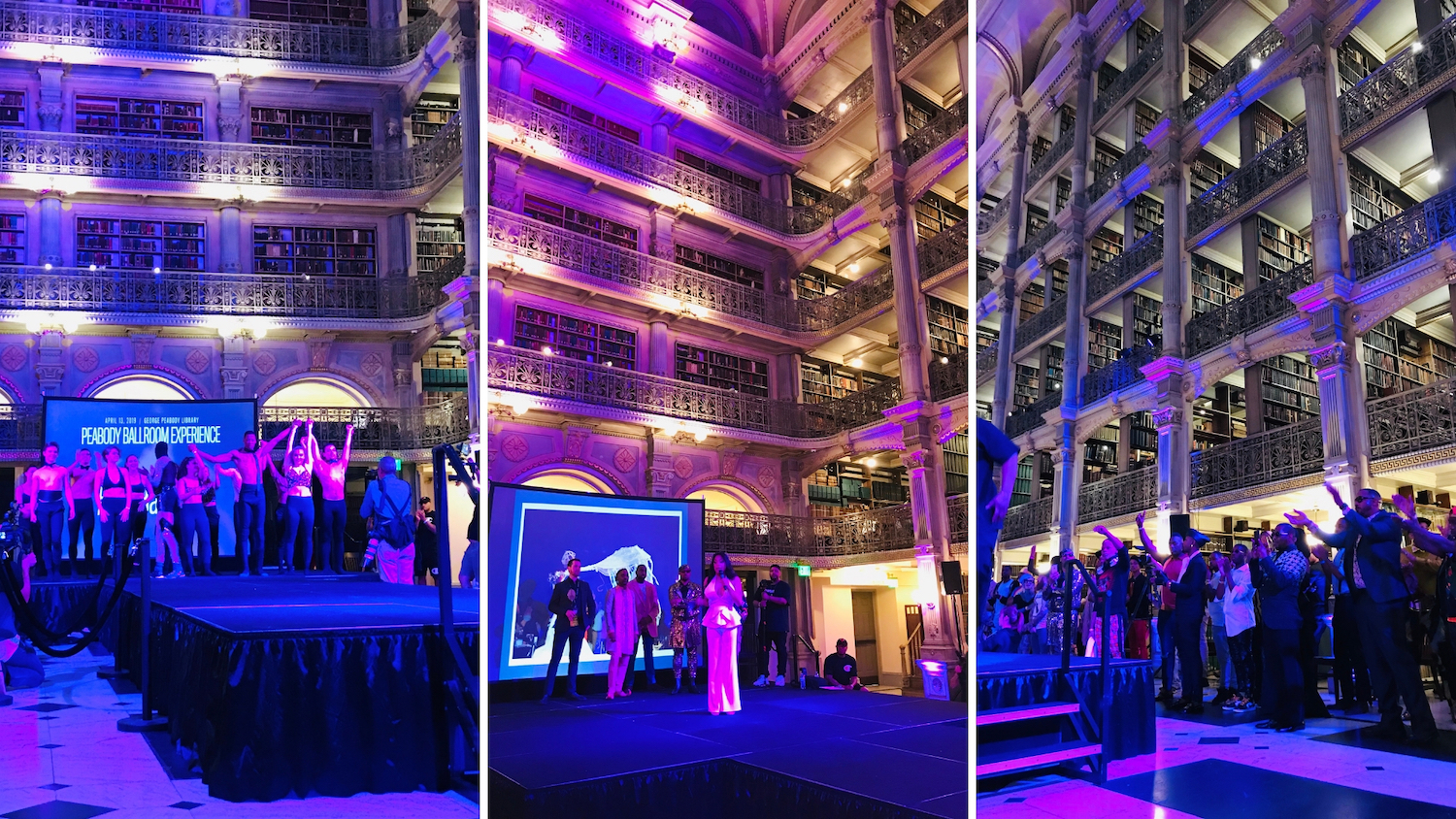 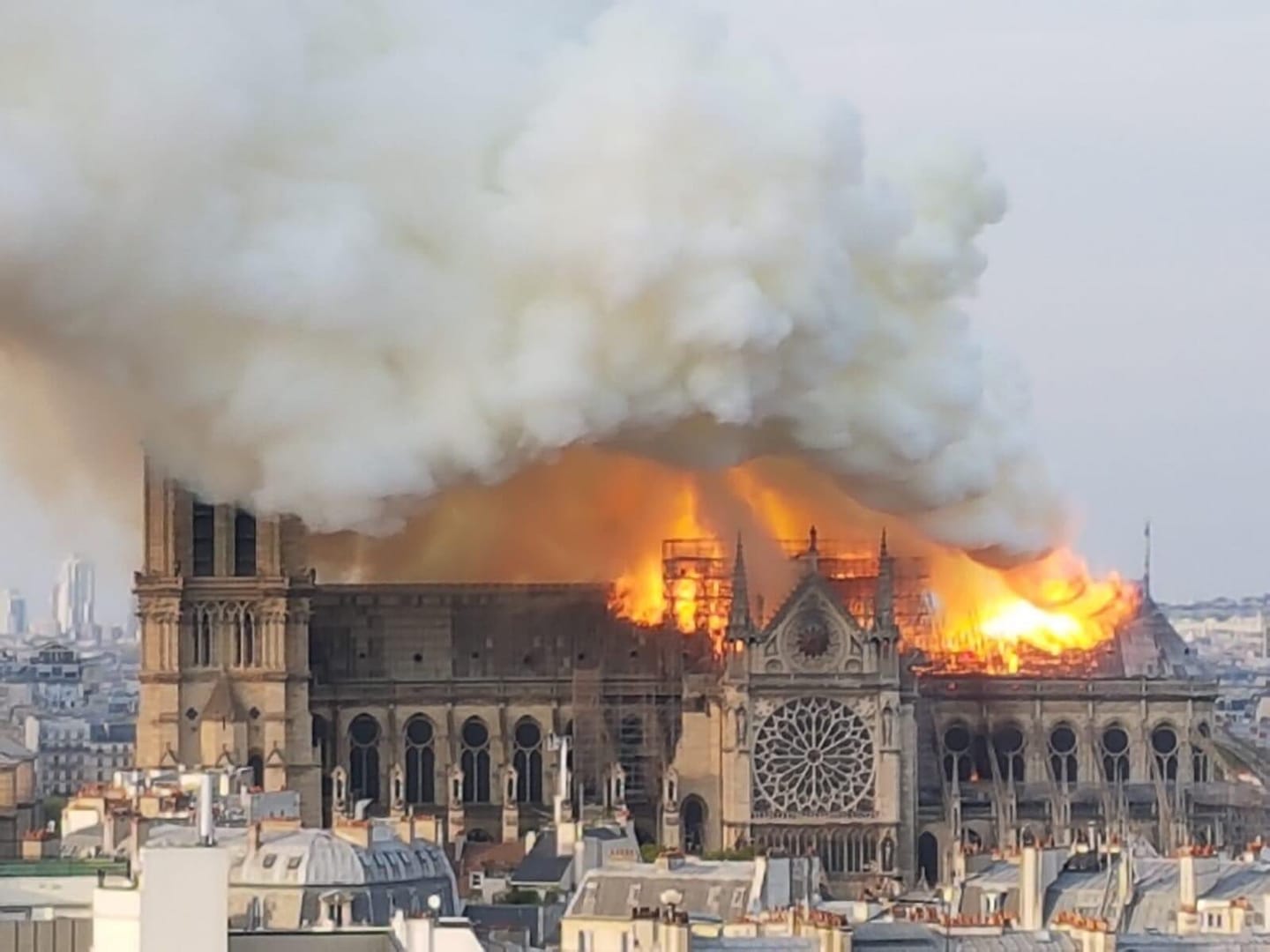 Visual Art
In “Perilous Bodies,” International Artists Pull Up the Roots of Intolerance 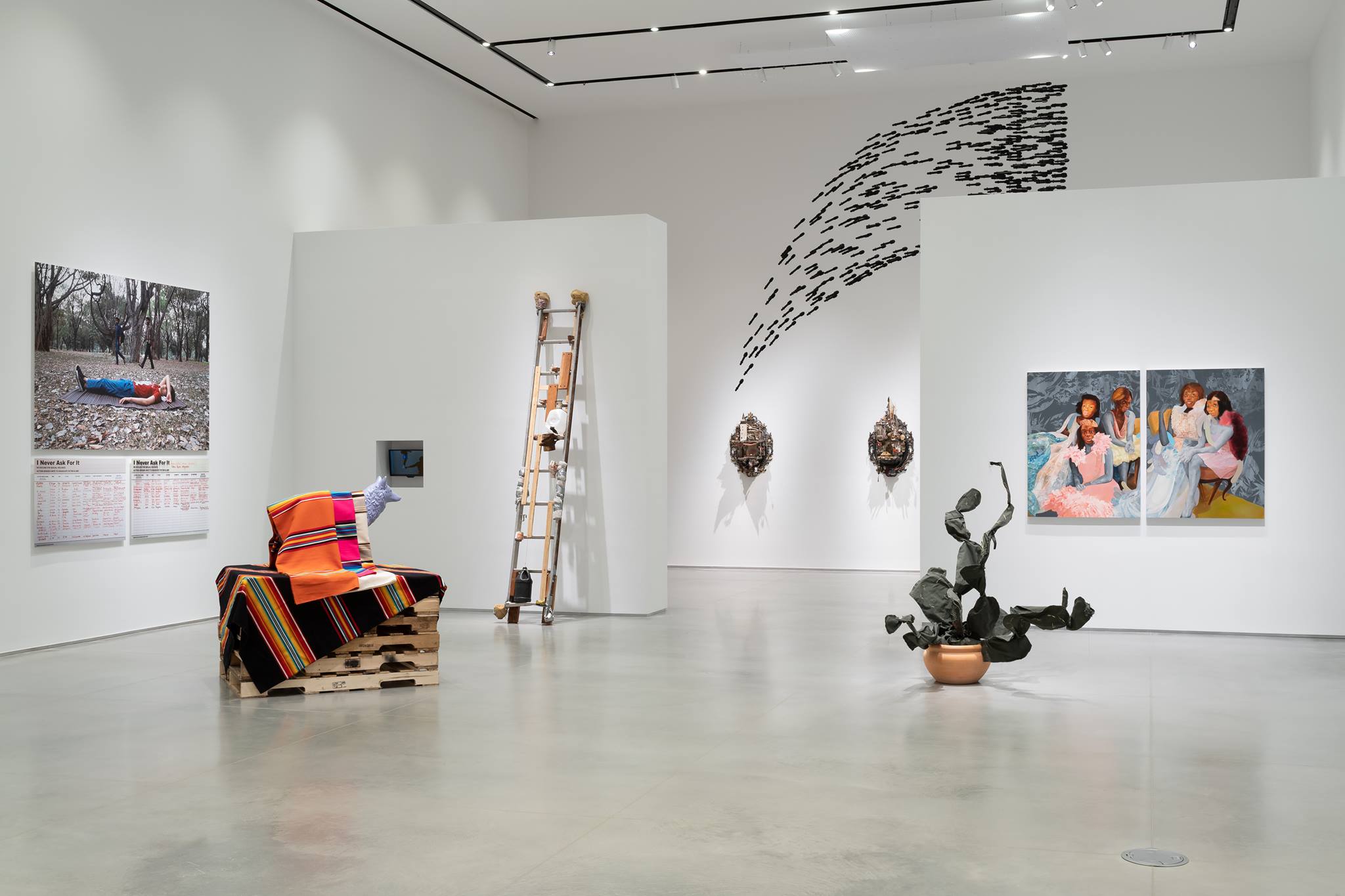 In an essay on the efficacy of political art in the age of Trump, critic Jillian Steinhauer writes that direct caricatures of him usually mean that “creators and viewers alike get validation, rather than a prompt for examination or self-reflection.” I agree with Steinhauer, to a point: I question the idea that using Trump’s image as a boogeyman whose defeat will magically solve all of America’s problems. However, I wholly support political art that criticizes the social and political institutions that enable people like Trump to thrive in the first place.

Diverting from obvious symbols of evil and intolerance, the artists in the Ford Foundation’s inaugural art show Perilous Bodies dig deeper to expose the roots of these issues. They explore their own childhood memories, social exclusion, and visceral pain, and that effort gives this show an undeniably authentic and powerful presentation.

One of the first things that you see walking in, Barthélémy Toguo’s “Road to Exile,” is situated in a small corner just outside of the exhibition door, squeezed in tight. There is no room to maneuver around the bales of wrapped African fabrics inside of a wooden dinghy, their colors providing a bright focus onto an otherwise dead space. I wished I could have moved alongside it, to negotiate my own space with the presence of the 12-foot-long boat. Then again, maybe that’s the whole point: it is a vessel full of promise, unable to go anywhere at all.

The gallery efficiently uses the 1,900 square foot space to display the art in dynamic conversation with each other, hanging above, below and to the sides. In Mahwish Chishty’s “Hellfire II,” for example, black bombs float in the skylights, inspiring Damocletian anxiety; thankfully, they do not land. 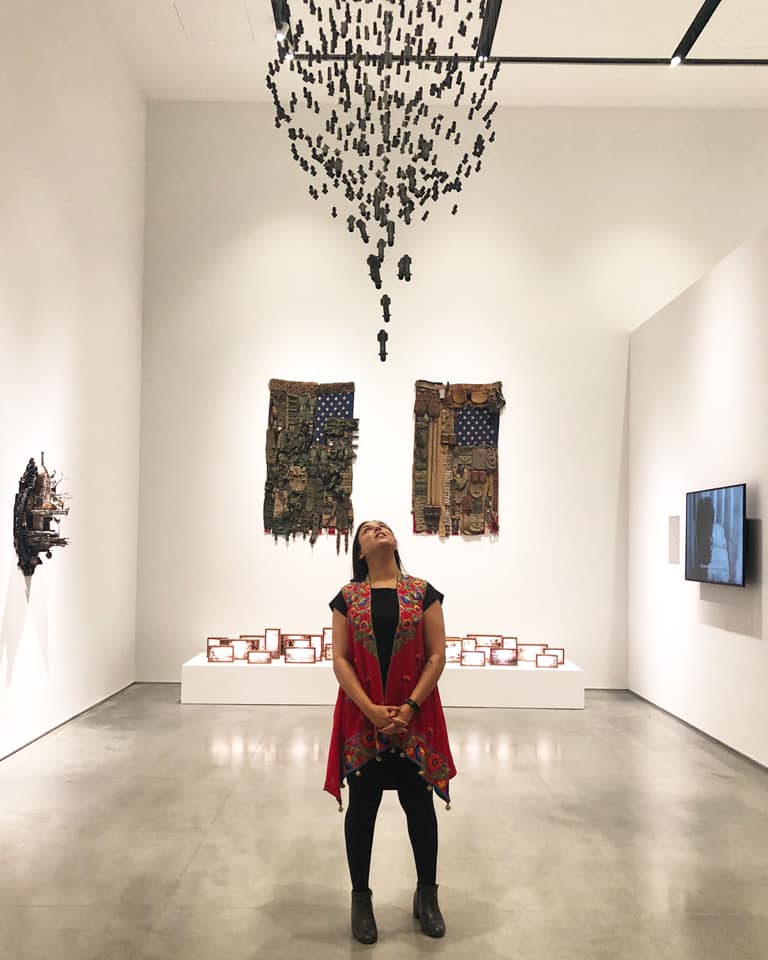 Meticulously crafted vignettes by Mohammad Hafez on the front wall hang perpendicular to two high-hanging, desecrated American flags by Iranian artist Sara Rahbar. The cloth pieces are confrontational with their filth, rigidity, and honesty. With one of the flags, entitled “Land of the Free, Flag #55,” Rahbar inserts figurines of a crucified Jesus here and there, next to gas masks and inside the folds of the army supply belts on the bottom. Both flags look tired of providing patriotic cover for a country’s naked ambition to achieve supremacy at the expense of everyone else in the world.

The “Damascene Athan Series” by Hafez is installed right at eye level for a 6-foot-tall person. Hafez’s vignettes are filled with the minutiae of a place, a time, a cherished memory-turned-dream. Hafez, originally from Syria, makes these dioramas to transport himself back home, before war and strife tore it apart. “And by the blessing of God, it transports the viewers as well,” he tells me. “I did these things for 10 years in secret. Nobody knew about it. It was a therapeutic way for me to connect to home.”

Hafez uses compilations of photographs, fixtures, and his own memories to construct the scenes, making none of the places actually real, but instead evocative of his feelings about a real place. Every little detail—the masonry, the plants, tiny cups of coffee, the mirror taking the place of shining water on the ground—is meant to recreate the sense of comfort that he felt in his old neighborhood in Aleppo.

In the exhibition’s largest room, Dread Scott’s “The Blue Wall of Violence” interrogates police brutality on the Black male body, creating a taiko-like cacophony with police nightsticks. Nearby, Thenmozhi Soundararajan’s triptych “Ama, Amachi, and Mother. We are still here” hangs in a nearby corner. Soundararajan is descended from the Dalit caste in India, an ethnic minority of 270 million people who are routinely denied basic civil rights, and are targets for sexual and physical violence from higher-caste Indians. The artist’s presence in this show is a quiet but significant act of resistance against her people’s systematic erasure. Using a copper plate printing process, Soudararajan writes out words and exposes the photographic images of her ancestors, creating a visually powerful contrast with the black ink background, while also demonstrating the innate value of their words and bodies.

In the corner next to Scott’s installation is photographer and performance artist Nona Faustine’s “Demeter’s Morning,” where she transforms herself with an old blanket and a cot filled with cast-aside stuffed toys. In addition to using the myth of the grieving Demeter to represent the modern problem of missing and exploited Black women, her piece comments on the rapid gentrification happening in predominantly Black and Latino neighborhoods. “I see these women with education, women who have given their lives to raising families who are suddenly on the streets of our cities,” says Faustine. “Not all of these people have mental issues. A lot of them are just displaced, pushed out.” 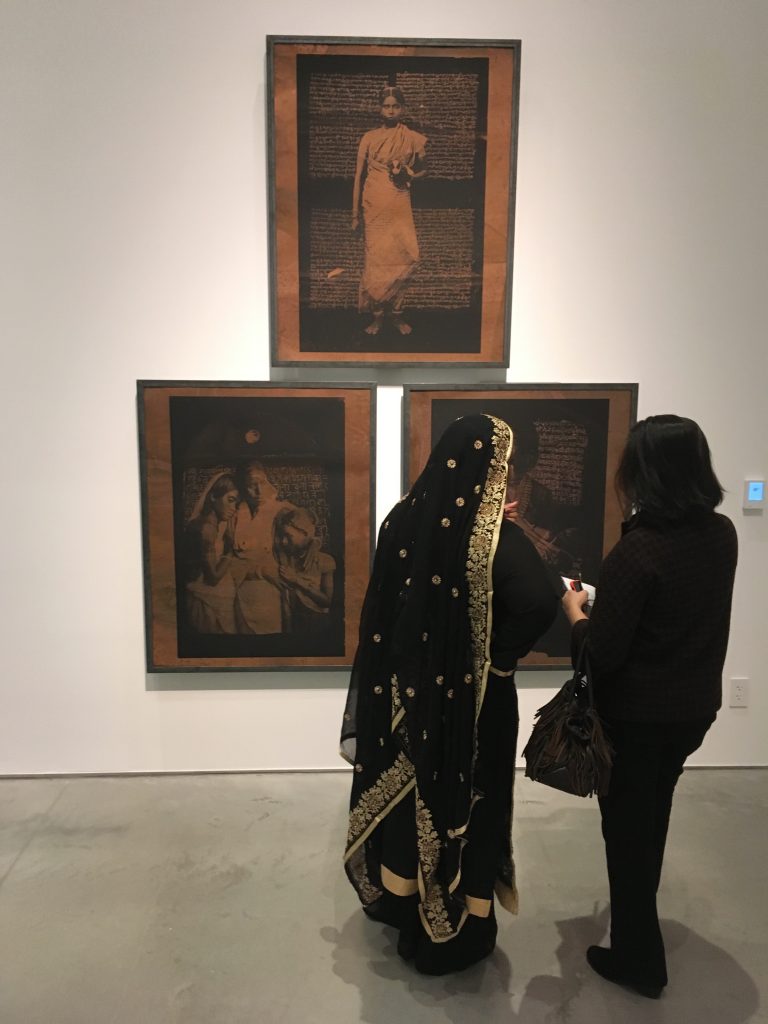 Curators Jaishri Abichandani and Natasha Becker envisioned this exhibition as a visual representation of constructing and navigating a body through uncertain and hostile times. They chose the name, Becker says, “because in everything and everywhere we look, there are bodies in trouble, under duress, traumatized—the metaphoric body as well as the earth as a body, water as a body.” Abichandani added that the idea of bodies under civil assault was the inspiration for her show proposal to the Ford Foundation’s gallery director, Lisa Kim. She was drawn to the necessity of utopian thinking in social justice movements and revolutions, based on activist and writer Naomi Klein’s research. “Without having this utopian imagination, people aren’t going to be able to come together and we won’t be able to get that change,” Abichandani says. “All of these social justice fields have all professionalized and gone into their little silos—everybody works on their discrete issues and nobody’s actually working on the entire larger picture.”

Throughout this year, the pair will work on two other shows with the Ford Foundation: one on radical love that opens in June, and finally a synthesis of utopian ideals in the late fall. People in the art world and in politics need to better understand that America was built on the backs of people of color, whose ideas about improving this country deserve a platform.

It’s up to the show’s attendees to determine for themselves whether the political backbone of Perilous Bodies resonates. And whether the critical world decides to call overt declarations of the truth “more propaganda than art,” or wishes to debate if Trump is a worthy subject in the first place, the fact remains that real people continue to be harmed by increasing racist violence, not just in this country but worldwide. But these 19 artists from all over the globe amplify each other’s voices against white supremacy, refocusing the conversation on people’s real-life stories and experiences, a powerful beacon of optimism for those who wish to understand that they are not alone. 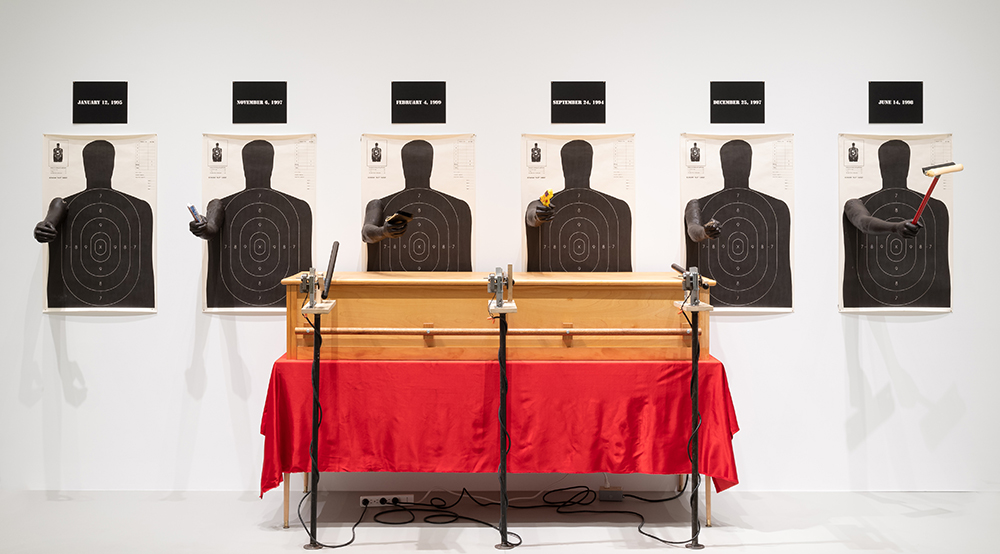 Photos courtesy the Ford Foundation, except where otherwise noted.