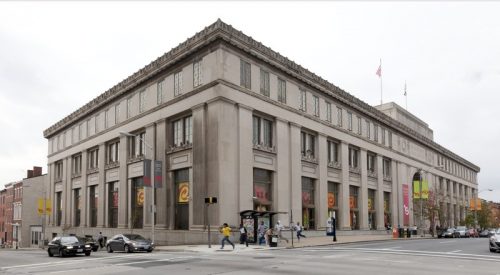 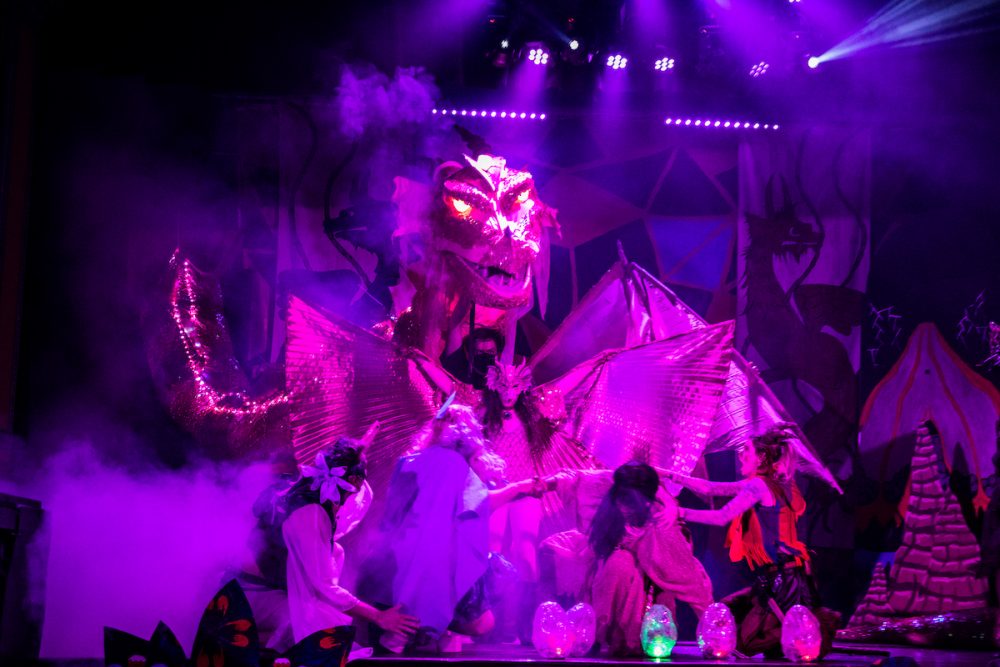 There is a collective urge to scream right now. Yelling at gruesome things can be daringly delightful. Audiences have been doing this for thousands of years, toward gladiators in the Colosseum, or everyday human dramas on the Jerry Springer show, or certain movies involving shower curtains and ski masks. These days, though, live audiences rarely have an opportunity to hoot and boo during theatrical performances. The exception can be found in productions of the Baltimore Rock Opera Society, also known as BROS.

In BROS shows, the audience’s vocal commentary enlivens the upbeat and uncanny production—in the vein of a midnight Rocky Horror Show. This weekend you can join in on the fun and see their latest original rock opera, Glitterus: Dragon Rising, at the Zion Lutheran Church.

A suite of passionate writers, musicians, stagehands, designers, and performers came together to produce Glitterus: Dragon Rising. The libretto includes more than a dozen original musical numbers written by six composers. A live band featuring synths, electric guitars, fast, precise drumming, and an aerophone brings the show to life. One would be hard-pressed not to nod along as the cast wails the lyrics. It’s an elaborate feat—requiring dozens of collaborators—to generate such an original show. As stage manager Liz Richardson says, “We never hit the same mistake twice, we always hit a new mistake, but it’s always a spectacle, and always worth it.”

The community members of BROS shared with BmoreArt some insights on the hard work that goes into having so much fun.

Saskia Kahn: What is the origin story of the Baltimore Rock Opera Society?

Aran Keating (Executive Director, Co-Founder): In 2007 a small group of friends got excited about putting the insane energy of cult films and big rock concerts onto a stage. We wrote the script and music for what became 2009’s Gründlehämmer. From the very first moment of starting “production,” we realized we were doing something way too big and would need a ton of support from all kinds of people just to make it happen. I started flyering around town saying “we need your help!” and listed every skill I thought we could use to make the show a reality. The excitement around the first show, the energy of the crowds, and the fun of creating wild performances that wouldn’t exist anywhere else are what keep BROS running to this day. There is nothing in the world as inspiring as creating a new piece of performance in community with a big group of amazing and skilled people who all share the same vision.

As the executive director, can you speak to how the culture of the community and camaraderie is maintained among the entire cast and crew? Are there any rituals that happen each year?

Aran Keating: Before every show, the entire cast and crew meet behind the theater for Alley Rally. We share information and announcements, then we give each other GJs (Good Jobs) by shouting out appreciation and making sure the unsung heroes get some shine. Then we get pumped up by screaming at the top of our lungs a call and response borrowed from the Italian opera tradition. I always take a moment on opening night to ask our first-time cast/crew members to raise their hands. Without fail, about half of the people raise their hands. I’m always so humbled that these artists and technicians and craftspeople are willing to give their time and life to our shows. It’s my job to find a meaningful place for them to put their energy.

How many people volunteer to put on this production?

Aran Keating: I counted about 120 contributors to the program. They put in anywhere from 5 hours to literally hundreds of hours on this show.

What defines the quintessential sound of a rock opera?

Cynthia Schatoff, who goes by Darmock (band director): Rock opera can’t be narrowed down to any one sound or genre. Each show has a different story and style. From rock ballads to funk, pop, metal, and more. What is at the core of all of the music are memorable tunes that support the story of the show.

Are there specific instruments or musical techniques that are unique to rock opera?

Darmock: There have been a number of different types of instruments used in rock opera performances, but none unique to rock opera. Often there are drums, guitars, bass, and keyboard. Sometimes there are other instruments such as aerophone, cello, saxophone and more depending on the production.

Since the score is written by a variety of composers, what do you do as the band director to create cohesion throughout the musical numbers?

Darmock: The composers should be given credit for working with one another and using each other’s works when building songs to create cohesion. Once the band had the compositions we worked together to balance our parts and make adjustments rhythmically or dynamically where needed. 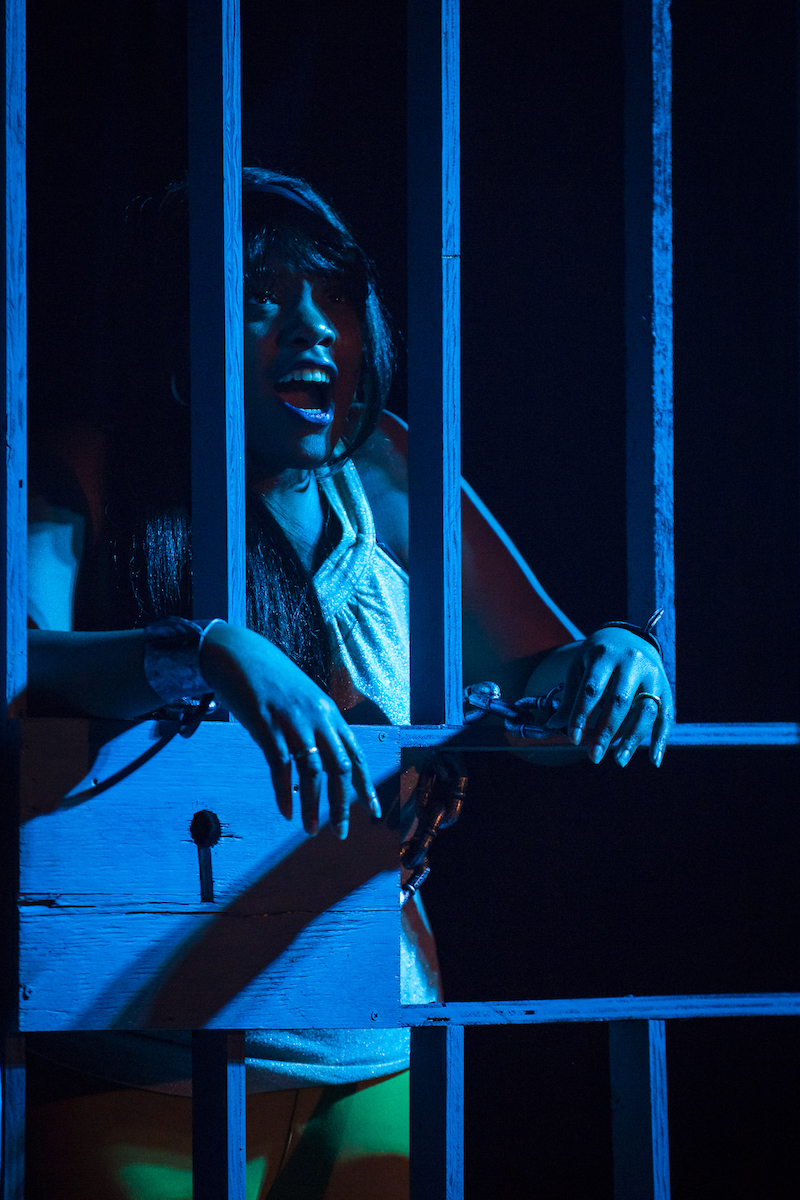 How long have you been working on BROS productions?

AG Sherman (costume designer): Like a lot of us, I’ve been doing Baltimore DIY stuff for decades. I volunteered with BROS for the first time on the second run of their first show, Gründlehämmer. I went off to do other stuff for a while and came back right before the pandemic, whomp whomp. Corona forced us all to focus. Since then, I worked on some puppet stuff, a few sculptural masks, and ran Costumes for Glitterus.

Can you discuss how closely you work with lighting, set design, and props in developing the costumes?

AG Sherman: BROS is all about collaboration and the power of teaming up. This time, Costumes worked most closely with Props (genius Michael Bull also makes our weapons and armor), the Dragon Team (too numerous to list but led by Sam Hanson, who arrived ready to breathe fire and kick-ass), and the incomparable Creatures Krackens, Justin Sabe and Tracey Townsend. Tracey and I designed the sleaze-spider, Zeth, together for Isiah Dorsey’s stellar performance. I’ve had the pleasure of knowing [Creatures Designer] Justin Sabe for over 15 years. He remains consistently full of delightful surprises.

Because of the elemental nature of the show, early on I pitched to Aran Keating, and the show creator, Sarah Burns Gilchrist, that the costumes should be based on the Tarot. They and director Amanda Rife allowed me the freedom to color the Arcana with my own ‘70s-tinged style, resulting in an anachronistic underground heavy-metal look that hopefully feels timely and fits the subject matter. Lighting guru Chris Allen and the Sets Team, led by Max Sobolik and Kate Smith-Morse, designed stuff that just gelled organically. Kate and I talked about picking the perfect color and detail for specific vignettes, but we were definitely on a similar wavelength from the start.

Who came up with the idea of Glitterus: Dragon Rising?

Jamie Ginsberg (story and scriptwriter): Sarah Burns Gilchrist is the “dragon mom” who came up with the original pitch for Glitterus: Dragon Rising. She, I, and the writing team all worked together to flesh that pitch out into a story. Then I took our outline, wrote a draft, revised it with the help of some excellent “Brojans,” did a second draft, and passed it to the fabulous revision team, who took the script to the finish line. BROS is an incredibly collaborative bunch, so everything is a group effort, which is great because it’s a really fun way to work. And a lot less lonely than writing by yourself!

What do you think the main message of the show is?

Jamie Ginsberg: I think the main message of the show is that we’re stronger together than apart; that there will always be power-hungry jerks who try to make you feel bad about yourself and the world in order to control you and those around you, but solidarity and friendship and diversity can open your eyes to new perspectives and show you strengths you didn’t know you had.

Each production births a new score, script, and show, but what do you think a common thread is in the works put out by BROS?

Jamie Ginsberg: BROS shows are wildly different from one another, but some common threads are: rebellion against fascism; independent vs. corporate art; finding yourself; the power of spectacle; and jokes about genitalia. That last one is super important.