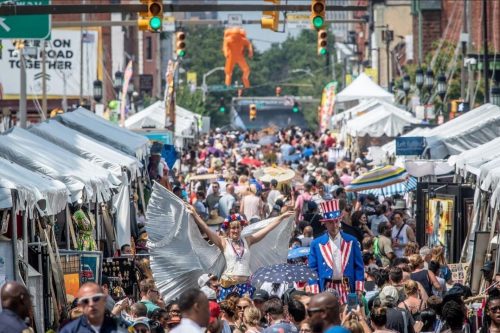 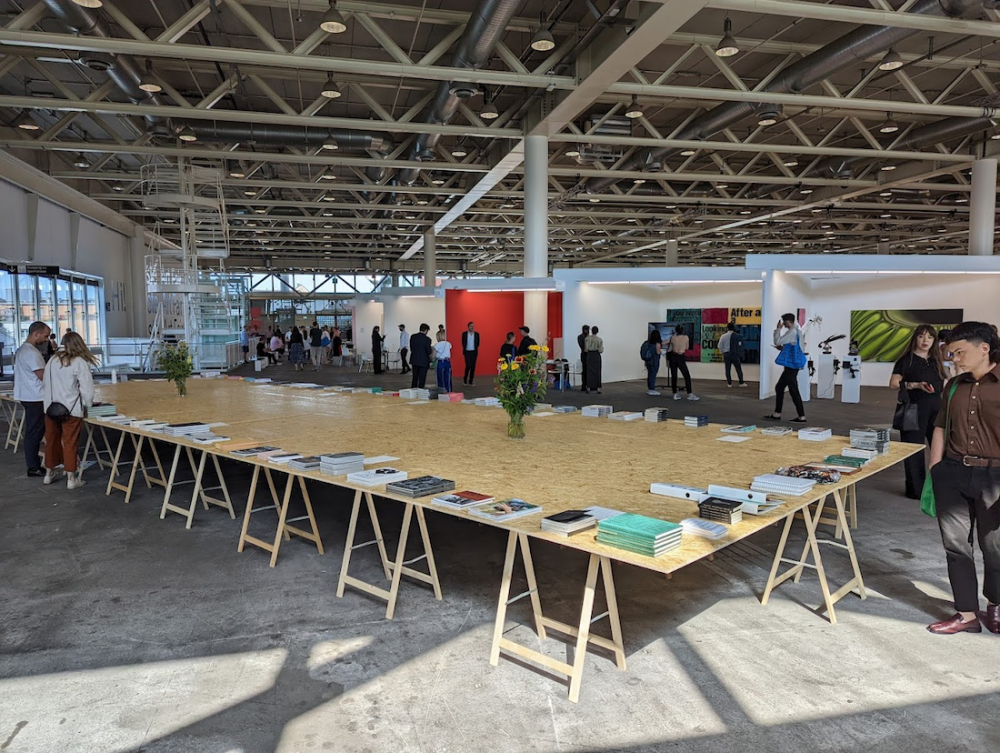 Liste Art Fair, inaugurated back in 1996, is now older than many of the emerging Gen-Z artists showing in its galleries. And it still manages to feel young, fresh, and cutting-edge. As one of the first “satellite” art fairs to spring up with a more “alternative” offering in the orbit of an established, commercial art fair such as Basel, Liste has earned the respect and reputation of a somewhat-institution in its own right.

Even though the fair has moved from its longtime home (a former brewery with a post-industrial aesthetic) to the more, well, “conventional” convention center Messe Basel a few halls down from the main fair, it still feels a bit punk. An endearing illustration of the fair’s hip je ne sais quoi: at the preview Monday afternoon, there was a mini bicycle traffic jam as the fair’s VIP invitees arrived on two wheels and vied for spots to lock up bikes between other attendees in shorts sprawled on the sidewalk, enjoying beers and cigarettes in the sun. Contrast that scene with the typical art fair VIP opening, which usually involves a maddeningly inefficient parade of black car sedans and UberXL SUVs inching through a clogged porte-cochère to deposit attendees wearing impractical shoes as close to the entrance as possible.

If well-heeled art advisors and investors anxiously watch the sales at Art Basel to predict future tradewinds, curators and critics seem to be buzzing more about Liste—excited to see what their global peers’ zeitgeist is catalyzing in young galleries from Berlin to Beijing, Oaxaca to Oslo. Fair director Joanna Kamm has delivered a show exceeding that expectation, serving up a program that neither sacrifices diversity for the sake of cohesion nor vice versa.

So what’s on view/trending across the emerging art world hive-mind? Campy horror aesthetics referencing slasher films and Alien, respectively. A lot of charmingly faux-naive, playful techniques in traditional media such as painting and ceramics, as well as experimentation with unconventional materials and found objects. Abstract allusions to the body and associated anxieties coexist happily with more direct representation and environmental concerns.

With 82 galleries representing 37 countries, the surprisingly compact fair is dense with content. That makes it both hard to photograph and to pick favorites. Nevertheless, here are some highlights that exemplify the trends on view:

At Liste, most artists have swapped the grand, expressive brushstrokes and drippy canvases so popular a few years ago for tight, almost claustrophobic mark-making. Even in Vuk Ćuk’s larger canvases, the Serbian painter’s hand sticks to a restricted gestural vocabulary. These make for endearingly awkward paintings that complement their nerdy, nostalgia-tinged content—yearbook portraits, a young Bill Gates reclining against an early PC, and a larger-than-life video game landscape assembled from childhood pop culture references.

Katelyn Eichwald approaches oil painting with a similar, illustrator-like hand in her two-person show at Parisian gallery Sultana’s booth. In “Far Away,” Eichwald renders the famous Neuschwanstein castle from a fairytale Disneylandmark as something more sinister and anxiety-ridden—like the backdrop in an awkward school play adaptation of Dracula.

I found myself thinking (quite morbidly, appropriately) of Matthew Wilson Smith’s treatise on the castle, its mutability of meaning as an icon without fixed significance, and as a harbinger of death for Andy Warhol. Warhol painted the famous building shortly before his death in 1987—”marking yet one further reproduction in the history of reproduction of which Neuschwanstein was an already simulacral point of origin… a copy of Romantic copies of medieval castles that never existed, copied again in countless objects of German neo-Romantic kitsch and once again as the centerpiece of Disneyland’s Magic Kingdom, which is itself reproduced with slight variations at Walt Disney World, Disneyland Paris and Tokyo Disney… Neuschwanstein is the Mickey Mouse to the Wicked Witch of Speer’s ‘Cathedral of Light.’ One wonders whether, having reproduced this perfect object of reproduction, this tower at the very heart of the Gesamtkunstwerk, Warhol simply had no further to go. A few days later, he would be found dead in a New York hospital.”

Canadian painter Alison Yip, for her part, takes a more subtle approach to body horror, or what the artist refers to as “cursed figuration.” Her delicate still lives are painted atop irregular found wood surfaces—ensuring that the layers of pigment and medium will crinkle and sag as the wooden supports continue their irreversible process of rotting. Each painting depicts an array of health-conscious products from kale salads to anti-wrinkle cream—commodities sold with the promise of antioxidants to prevent our own surfaces from their inevitable decline and degradation. The amount of skill and thought that goes into these artworks adds to their wabi-sabi appeal. I for one appreciate their craftsmanship and beauty all the more for the fact that they’re an art conservator’s worst nightmare.

Maybe it’s all the microplastics sloshing around our bodily fluids, maybe it’s because we’ve all seen one-too-many Wish.com popup ads for terrifying-looking silicone sex toys, but there’s no denying that a full-blown body-horror trend is spreading like monkeypox, with artists making Cronenberg-esque allusions to the body in synthetic materials. In Nevine Mahmoud’s series “foreplays,” found objects are recombined with hard materials such as resin, glass, and carved stone to create deceptively supple, fleshy lumps. Most reference orifices or protrusions with penetrative potential, and are displayed on cold, clinical surgical steel shelving like specimens from a dissection. They’re really, really unsettling.

Eva Fàbregas is also one of many artists experimenting with industrial materials to fabricate surrogate, gross body parts. Her illustration-like works on paper have a playful campy-gore vibe, as if the cartoon guts from a disemboweled anime character turned into penises and started devouring each other in a disgusting, adorable, pastel-hued ouroboros orgy. But it’s her amorphous silicone sculptures that steal the show. Viewers are invited to squeeze and manipulate them, which can cause nipple-like protrusions to emerge from squishy blobs that at first look like enormous testicles, but then become breasts, and then something wholly other as the engorged nipples take on exaggerated phallic proportions.

Anita Mucolli, who has a solo booth celebrating her Helvetia Art Prize win, definitely also takes the blue ribbon in the campy body horror category. Of all the lumpy, phallic/organic ceramics on view at the fair, hers are simultaneously the creepiest and cutest. The installation is populated by ceramic creatures that nod to H.R. Geiger’s “face-hugger” creatures from Alien, as well as cactuses, insect stingers, tentacles, dildos, and other things that could prick you (no pun intended). They’re lounging around a pool filled with a milky white liquid that glows when the sunlight hits it. This installation hits all the right notes as the grand finale of one very weird, very smart fair.

But my personal favorite booth is probably Southard Reid’s solo presentation of Armando D. Cosmos’s comfort-blanket-scaled tapestries. Each is the end product of a process that begins with collaging archival material related to science, technology, and the environment from sources such as old textbooks or pamphlets. They’re beautiful and touch on the contradictory impulse to feel optimistic about “progress” and terrified about the toxic legacy left by once-innovative pesticides or nuclear power plants that promised to feed or electrify the world.

These works are woven with mixed polyester/cotton yarn—typically a big environmental no-no, because when natural and synthetic fibers are combined, the organic fibers can never again be composted into the organic nutrient cycle, and the synthetic polymers can’t be put back in the recycling stream of man-made materials because they’ve been “tainted” by the organic fibers. However, thankfully, Cosmos makes his mixed-fiber weavings using yarn recycled from the waste piles of large-scale mills.* Cosmos even told me his newer works are 100 percent cotton—ensuring they’re eco-friendly for their whole lifecycle.

There’s a utopian sci-fi charm to “Sheltering the Future” I’m immediately drawn to. The blocks of text explain that planning dense, transit-oriented cities could house the majority of the world’s population on 3 percent of the land while preserving the majority of the world’s natural landscapes and green space. The source material comes across as a bit naive considering the illustrations look like they came from an era when the majority of the English-speaking world was busy bulldozing forests and fields to build highways, suburban tract housing, and shopping centers with parking lots bigger than most European downtowns. But in the context of Switzerland, where charmingly retro-futuristic modernist towers are shoehorned into a city from the 13th century, and you can take an electric tram down largely carless streets and arrive at the countryside in mere minutes, it feels like a nice postcard from this privileged little bubble of alternate reality.

*This text has been updated to reflect that the artist uses recycled yarn from large-scale mills’ waste piles.