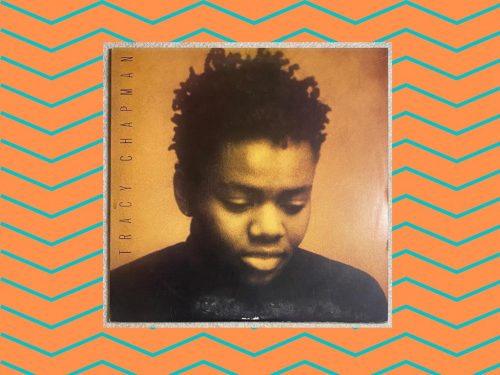 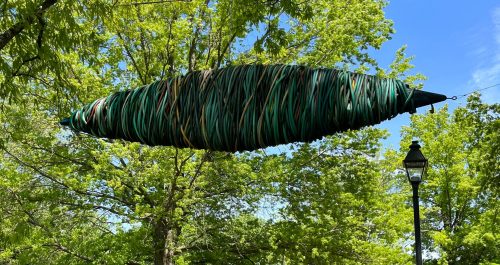 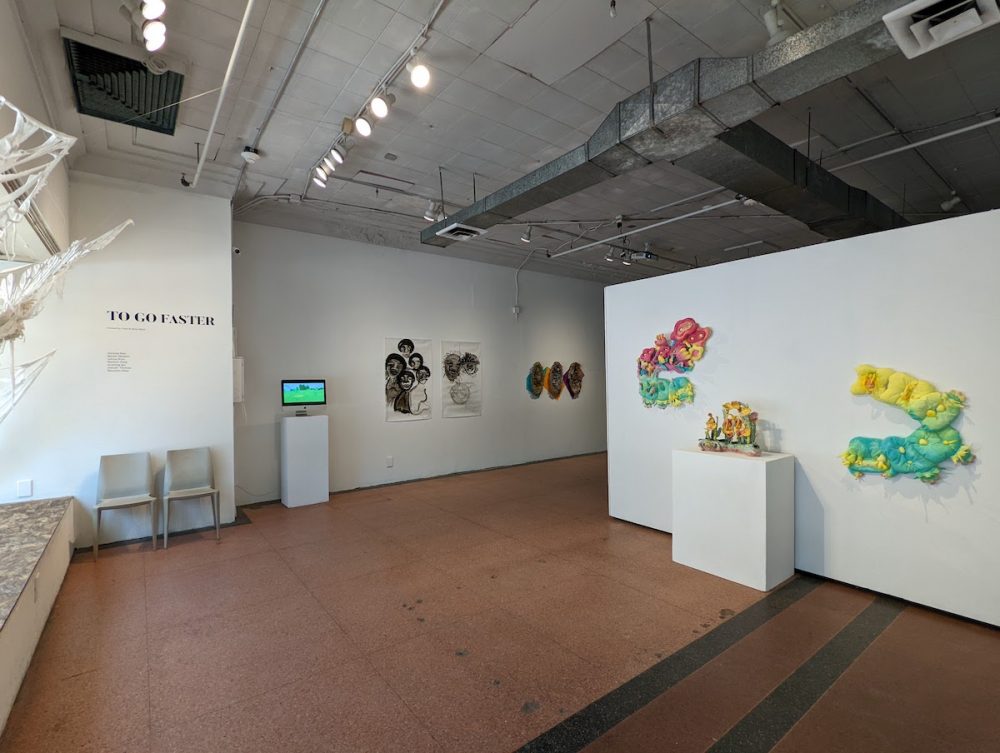 Fast forward. Rewind. Pause. Current Space’s To Go Faster is a dynamic exhibition that explores the rapid pace of society, the collective need to move at a brisk speed, and how that affects our surroundings. The curatorial collaboration between Tado Art Centre and MICA NFAT Media includes a diverse group of six artists—from recent grads to established makers—who engage our society’s obsession with velocity.

The show’s progression is similar to the metaphorical act of falling down a rabbit hole and finding more whimsical visuals the further one progresses, allowing visitors to reflect on the subtopics within the exhibition and their connections to the main theme: the swiftness of time in a contemporary context.

Lehna Huie’s ink-on-paper portraits, “The Moment of Time” (No. 1, 2, & 3), bring a strong element of humanity to the space. Huie uses bold linework and splatter techniques to depict a group portrait of unidentified individuals who share the same tranquil expression. “The Moment of Time” No. 1 and No. 3 are limited to only including the individual’s faces, while No. 2 includes the abstract silhouette of those in the foreground. The series asks viewers to pause and reflect on the people who are present in the moments of our lives that leave an impact on us. As the only black and white drawings, Huie’s portraits visually round out the exhibition, a subdued counterbalance to brightly colored sculptures and two-dimensional animation by Haochen Zhao and Haomin Peng, respectively.

The whimsical nature of Zhao’s ceramic and fabric sculptures creates a visual reminder of childhood, back when the tempo was much slower. The wide range of bright colors and organic shapes enliven the world of the characters she creates, which include flowers, raindrops, caterpillars, and more. Zhao’s storytelling skills speak for themselves as each piece feels part of a bigger whole. The fabric sculptures “The Danger of Dreaming” and “The Sweetness of Dreaming” are mounted on the gallery wall and create an implied frame around the ceramic piece “Leaving the Old Body Behind.”

The pieces’ names and placement in the gallery space suggest their connection in an essential part of the human experience: sleep, which allows us to explore our subconscious while also existing in a physical state where we are not aware of the passage of time. These three sculptures by Zhao depict the process of overcoming one’s fear of their subconsciousness, surrendering control, and discovering enlightenment. In contrast, the two fabric sculptures present opposing points of view attached to the process of shedding our old selves, representing our fear of change, as well as the joy and excitement we feel at the prospect of becoming a better version of ourselves.

The visitor leaves asking themselves, who am I in relation to my environment and how am I affecting it with my actions? Does one have time to figure that out in a world that moves so fast?

Chunyu Ashling Han’s installation depicts the complexity of time and space in a materially masterful way, while also making references to geometric principles and Greek mythology. “Point, Line, Hole, and Infinity” is a central object in the exhibition, as it is visible from the gallery’s exterior storefront windows. The approximately 4-by-8-foot sculptural installation, made of fabric and recycled materials, hangs from the ceiling and forms two webs knotting into themselves, creating cocoon-like shapes. The title of the piece is a nod to Euclidean geometry’s point-line-plane postulate, which is the mathematical basis for three-dimensionality. The installation anchors the exhibition as a representation of the relationship between time and space and how we navigate it.

Han’s “Orpheus Returns Serious” is a triptych porcelain sculpture depicting three ecosystems that range from lush green to dry and hardened. Different creatures, such as birds, disembodied eyes and heads, human hybrids, and other animal-like entities, evoke a sense of magical realism. The piece references the Greek myth about the famous musician and poet who traveled to the Underworld in hopes of reuniting with his wife, only to arrive at ultimate failure and heartbreak. “Orpheus” explores the passage of time distinctly before and after the loss of his beloved Eurydice, trapped for an eternity in the Underworld. The sculptures are also a representation of Orpheus’ physical journey from the greenery of Earth to his descent into the Underworld’s dark and inhospitable environment. The possible dual interpretation of the sculpture further shows Han’s theme of the connection between time and space in her work.

Haomin Peng’s “BUT(bud)” follows an animated flower gaining consciousness and becoming aware of its existence in a video game. It depicts the plant becoming sentient as the environment around it changes, with the sun transforming into a clock, a constant reminder of the passage of time and its accelerated movements leading to the destruction and reconstruction of the flower’s environment and the flower itself. The video climaxes with the appearance of an anthropomorphic tree that informs the flower they are in a video game.

After realizing the flower cannot move or speak, the tree offers four dialogue prompts that show up on the screen like a video game option menu. The visual element of the menu gives the piece a pseudo-interactive feel, as the visitor can imagine what line of dialogue they would like it to pick. However, the flower is not able to pick a choice because of its inability to move. This inaction brings up the question of what would have happened if it could go back in time and pick what it wanted to say, a very human situation. Peng’s video is ultimately is a commentary on consciousness, the passage of time, and the “what if’s” that plague us when we cannot make a decision.

To Go Faster features three other video installations. “And That’s The Way It Is Mocking Bird,” by Maren Henson, depicts a mockingbird moving around tall grass while immersive, layered audio plays as a soundtrack over headphones. Three distinct male voices are played on a loop saying “And that’s the way it is,” in addition to the bird’s chirping and eerie background noise. The repetition of the statement is an attempt to convince the visitor what it’s saying is true. However, the audio and title can be viewed as a question rather than a statement. When examined through this critical lens, “Mocking Bird” asks whether there’s more beyond what we’ve seen or been told.

Anxiong Qiu’s animation “Flying South” illustrates the passage of time through the change in seasons, birds’ annual migratory flights, and the slow destruction of the environment. Qiu’s strong linework and gentle background music balance each other harmoniously. The video depicts detailed illustrations of nature and animals and the capitalistic systems that destroy them, such as animal slaughter and waste burials. It forces viewers to come face to face with the actions that destroy our environment and what we lose in the process.

Jennet Thomas’ “IT ONCE HAD A FACE, NOW IT WANTS ONE AGAIN” is a video installation that resembles the style of the otherworldly faux children’s puppet viral web series “Don’t Hug Me I’m Scared.” Through animation, costume design, acting, and singing, Thomas’ performance in the video installation transports the viewer into the immersive world she has created. The video provides commentary on environmental pollution as the characters used to be oysters before they merged with trash thrown into the sea. It depicts how garbage decomposes in water, and the titular line from the character Clothy, played by a costumed actor, leads one to presume Clothy’s “face” refers to its previous condition. The video concludes with the statement “The world is completely alive.”

To Go Faster presents the question of what happens in a world that is obsessed with moving at a fast pace. The result is a cohesive exhibition that covers the topic of loss of the environment and of the self.  The visitor leaves asking themselves, who am I in relation to my environment and how am I affecting it with my actions? Does one have time to figure that out in a world that moves so fast? The answer is in the antithesis of the exhibition: We need to slow down.

To Go Faster is open Fridays & Saturdays, 1-5pm, during Garden Bar hours, or by appointment. There will be a closing reception & artist talk on Saturday, Sept 10th from 7-10pm.