The Internet Is Exploding: 10 Must-Read Articles This Week 11/20 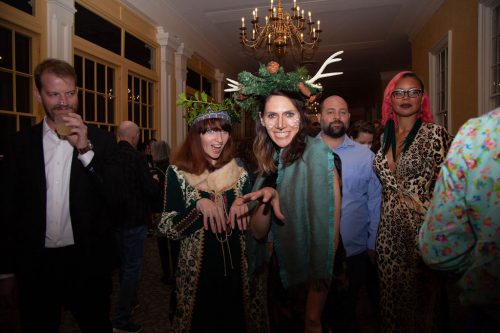 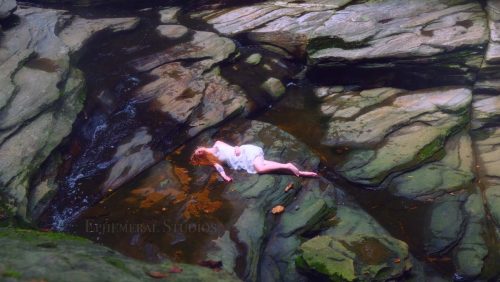 No Mermaids Without Ghosts: Jennipur Jane at the [...] 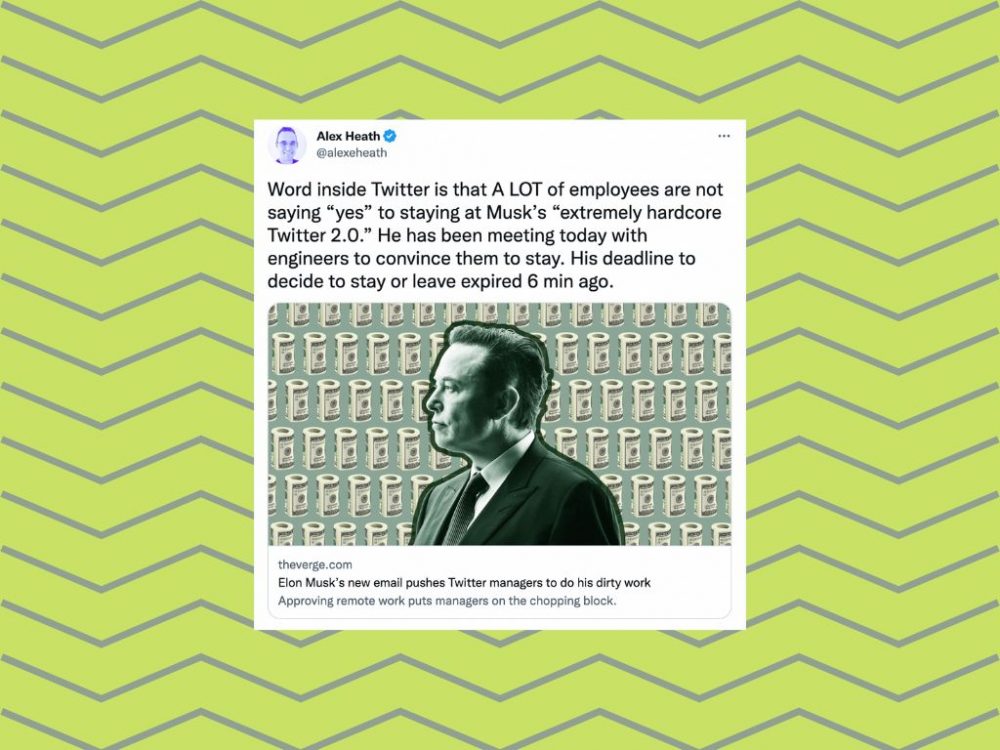 The internet had me WRECKED this week. So much happened so quickly! I spent a lot of time freaking out about Twitter. Protests continue in Iran. There was a missile strike in Poland. Justice for Shanquella Robinson. A shooting at UVA. Highlights: Twitter, Elon Musk, eugenics, BuzzFeed, The Rock, bed habits, Ellen Pompeo, and Taylor Swift vs. Ticketmaster.

The internet this week was ablaze discussing the downfall of Twitter. Currently, scrolling on the social media platform means watching its downfall. On Thursday, it was estimated that 1,000 employees resigned, and “some teams, such as the engineering team that manages Twitter’s core system libraries, are completely gone now,” after Musk emailed employees that they must commit to an “extremely hardcore” work culture or leave. Reporter Alex Heath has been covering the ever-evolving situation all week for The Verge. Apart from sharing links to his reporting on this Twitter thread, Heath provides an additional analysis of the situation.

It is not a secret that many people hold deep contempt for Elon Musk, and that he is possibly the most hated person on Twitter at the moment. Everyone is honestly fed up with him. In this thread, @CapitolHunters dissects Musk’s lies over the years—with receipts—and why his constant deceit is “dangerous for the US.” (The thread is also archived off-site.)

Twitter is still a thing for the time being, but users of the platform have been mourning the app since the news of Musk’s acquisition. Thursday’s mass resignations particularly had Twitter in a frenzy, and everyone had jokes. It is a sad and hilarious time.

Earlier this year, Julia Black, a features writer at Insider, published a story on how Elon Musk has more children than the public knew about, and that he has a set of twins with one of his employees. This week, Black published what she “see[s] as the big picture around that story.” It is a story about a belief with deep eugenic roots in which people “fear that falling birth rates in certain developed countries like the United States and most of Europe will lead to the extinction of cultures, the breakdown of economies, and, ultimately, the collapse of civilization.”

So-called pronatalists are growing in numbers “in wealthy tech and venture-capitalist circles,” and “it’s a theory that Elon Musk has championed on his Twitter feed.” As Black wrote in her thread, and further analyzes in her story, “even if this seems like an elite/niche subculture, even if the world ISN’T at risk of ‘civilizational collapse’ like they believe, it’s gonna affect you, too. Because these same circles are funding WILD new technologies that are ‘reinventing reproduction.’ Sci-fi stuff.”

This is truly a wild, entertaining, and scary read.

5. The New Republic: Who Said It: Elon Musk or Mr. Burns?

As Twitter begins to exponentially decay, more and more jokes and memes, about the fate of the site under its new owner, arise. The New Republic got in on the comedic action with this fun and somewhat tragic quiz. As the title suggests, the quiz is comprised of quotes said by either Elon Musk or Mr. Burns from The Simpsons, and players have to guess who said each statement.

6. The Verge: The unbearable lightness of BuzzFeed

The first time I ever remember seeing a BuzzFeed article was on Facebook in high school. Founded in 2006, BuzzFeed had a chokehold on people when I was a teen during the late 2000s and early 2010s. From 2012 to 2013, BuzzFeed “tripled its revenue to more than $64 million and invested millions into its editorial operations.” The media site’s popular lists and quizzes were inescapable, and soon videos started popping up too. Sometimes I would sit with friends and we would just take quizzes for hours.

As Mia Sato writes, the clickbait enabled the site to build out its news vertical, which became well-known for investigative reporting and won numerous awards, including a Pulitzer. “In the early to mid-2010s, the strategy seemed all but unstoppable: cute animals and feel-good photos subsidized a ferociously ambitious hard news division, and BuzzFeed’s ability to drive internet culture sparked outright jealousy from others in the media,” Sato writes.

BuzzFeed lost its chokehold when Facebook’s algorithms changed, deprioritizing the clickbait articles the site specialized in, and when many of the talent and employees that cultivated followings were either fired or laid off.

BuzzFeed arguably hasn’t aged well. And while I still read BuzzFeed and its affiliate BuzzFeed News from time to time, it is waning from cultural relevance, and is increasingly facing scrutiny over its journalistic practices—namely mining other platforms, like TikTok and Reddit, for content. The practice has become “so common it’s now a recurring joke. Some users have taken to adding disclaimers at the top of their posts: BuzzFeed, don’t use this without my permission.”

I don’t know if many people would miss BuzzFeed if it left the media landscape, but we are missing “an actual oral history of BuzzFeed 2013-2017.”

7. The New Yorker: The Rock Goes Back to Black

I have an affinity for mind-numbing action movies, so I end up watching a lot of things with Dwayne “The Rock” Johnson in them. The films are easy to watch, and I know the plot of each one before it even begins. Every time I watch one of his movies, I’m baffled by how he “became one of the highest-paid entertainers in Hollywood, and practically a genre unto himself,” as Lauren Michele Jackson puts it. (I don’t know why I am baffled as I am one of the people that continuously consumes his “genre.”)

Born to a Samoan mother and Black father, Johnson got his start in entertainment through professional wrestling in the 1990s, before pivoting to film. Throughout his film career, he has built himself up as someone who is easy to like, with shifting racial identities. Part of the reason Johnson can do this is “because his Blackness in the movies is rarely a given. On the contrary, in role after anodyne role—including his latest, in the DC Comics blockbuster ‘Black Adam’—Johnson slips in and out of racial categories at will. The only fixed aspect of his onscreen presence is his own singular stardom.” In this essay, Jackson explores Johnson’s “slippery identities” and the cultural contexts in which they were created.

I split my time between New York and Michigan, and my sleep habits are drastically different depending on where I am. New York invariably brings out the worst of my sleep habits. At least once a week I get home after midnight on a weeknight, ruining the chances of getting any work done during normal hours the next day, leading me to work late into the night. But that is the only time the city is somewhat quiet enough for me to think. In contrast, when I’m in Michigan I’m usually home at a reasonable hour and go to bed between 10 p.m. and 11 p.m. I wake up around 8 a.m. and start working between 9 and 10. Regardless of where I am, I’ve never been one to sleep through the night.

Rachel Handler has insomnia, which has led her into the depths of sleep research. Anecdotally, it has long been held that screen time before sleep isn’t good. But “a new study in the Journal of Sleep Research, published in February 2022 and funded by Michigan State University… runs refreshingly counter to common sleep-and-screens wisdom.” It “explored screen use before bed as a form of relaxation rather than a form of self-harm, which is exactly how I and probably 5 billion other people use it — as a way of distracting our minds from the onslaught of material reality just before we drift off to temporary oblivion.” The researchers found that it could be helpful, and Handler “decided I would bravely peer review the study by studying … myself” in this comical “study.”

HAPPY DAY! Ellen Pompeo is FINALLY leaving the long-running ABC medical drama Grey’s Anatomy. Pompeo has played the show’s titular character, Meredith Grey, since the show premiered in 2005, but announced this week that she will be leaving the show after 19 seasons.

Although Meredith is Grey’s long-time protagonist, the character has a reputation for being whiny, annoying, and the “worst” character on the show. There are many many posts on the internet about why people don’t like Meredith, something that Pompeo herself began mirroring in her real life. There have been many incidents where Pompeo hasn’t understood her racial privilege. While she has used her whiteness to address the lack of diversity in Hollywood, she has also done so by touting her mixed children in a way that doesn’t sit right with me. Further, Pompeo is reportedly very controlling on set, and allegedly pushed a Black actor, Jerrika Hinton, off of Grey’s because she took pictures without the star’s permission.

Maybe now that the writers don’t have to center Meredith it can get better!

10. NPR: Taylor Swift says her team was assured ticket demands would be met for her Eras tour

Taylor Swift and her fans broke Ticketmaster this week when pre-sales for her Eras Tour went on sale. Demand for the tickets was so high that “Taylor would need to perform over 900 stadium shows,” according to a statement from the site, and the public sale was canceled due to “insufficient remaining ticket inventory to meet that demand.”

This debacle has reinvigorated ongoing criticism of Ticketmaster and its 2010 merger with Live Nation, “a controversial move that required conditional approval from the U.S. Department of Justice,” and that many opponents view as a monopoly on the industry.

The Justice Department has now opened an investigation into the company because of the sale. Regardless of whether or not you are a fan of Swift, “the documentary on the takedown of Ticketmaster by rabid Taylor Swift fans is going to be so good.”