No Mermaids Without Ghosts: Jennipur Jane at the Alchemy of Art 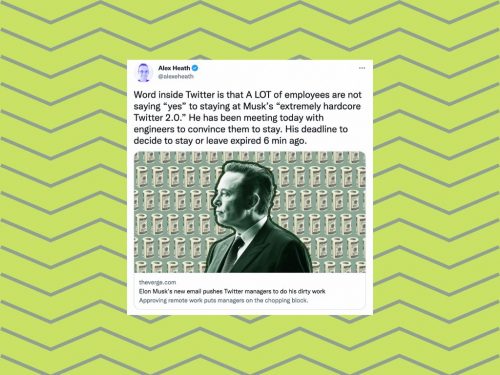 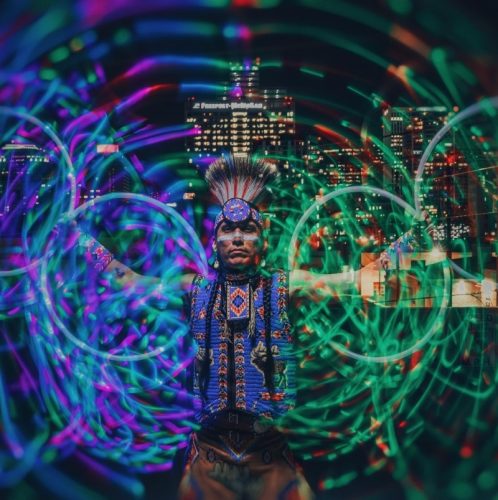 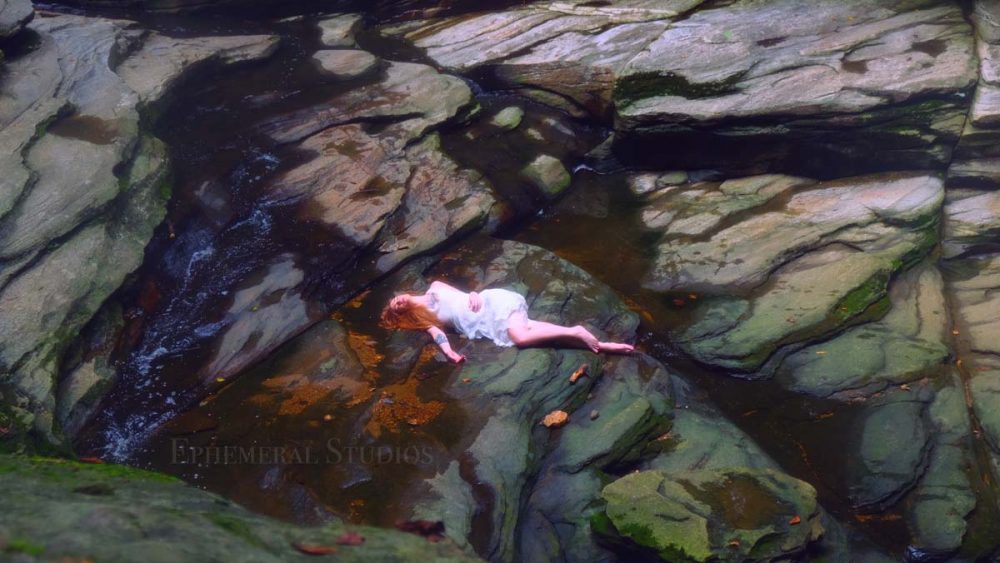 Jennipur Jane’s twin exhibits, Ephemerally Yours and Rituals, now on view at Fell’s Point gallery The Alchemy of Art, are centered around photography that “explores the duality of human nature.”

Rituals illustrates dark and mysterious subjects, the places they inhabit, and the actions they make when they think no one else is looking. Ephemerally Yours is a journey through the depths of nature guided by the creatures found in fairy tales and spaces untouched by humankind. Visitors travel the gallery as they embark on a journey through these two exhibitions, which are held in separate showrooms. Both exhibitions depict a balance between dark and light, the real and fantastical, fairies, and esoteric cults.

Upon entering the multi-room gallery, visitors first encounter Rituals. The space resembles a Victorian waiting room, with black-painted walls, candlelight wall sconces, and an intricate ottoman. The exhibit’s black-and-white photography collection is displayed around the room similarly to how a household would display family portraits and artwork. The elaborate, mismatched frames add to the exhibit’s immersive experience, where visitors step into a private, sacred space. Each photograph further adds to the collection’s line of storytelling and shares similar visual elements. Jane plays with the concept of light and shadow to portray eerie images of desolate, haunted places, and the in-between spaces of life and death.

“The Faces of Toil and Trouble” depicts a woman wearing a black dress wrapped in tulle fabric. The woman’s face appears doubled in the photograph, first with her chin tucked in with her eyes closed in a demure expression. Above the first iteration of her face, she appears with her head tilted upwards, her lips parted and eyebrows raised, clearly experiencing bliss with eyes still closed. The analogous expressions personify the characters of toil and trouble, as per the piece’s title.

“The Window” and “The Ghost Of Her” have the same subject, a woman wearing a white chiffon gown as she stands in front of a window. In “The Ghost of Her,” light appears to shine through the woman’s figure, suggesting she’s not entirely physically there and is instead a spirit. The woman’s translucency is not present in “The Window,” but rather the woman’s shadowed figure stares out the window, which emanates a strong, blinding light. The window serves as a passageway between the physical and metaphysical realm and the woman appears to journey between both places in this set of photographs.

If Rituals is a dark thriller, Ephemerally Yours is a supernatural fantasy film. These yin and yang exhibitions are a wondrous rediscovery of the balances found in our own lives and the world around us.

“The Passage” is Rituals’ anchor piece as it encapsulates the exhibit’s theme of the dark and macabre, in addition to overpowering the others in terms of size and scale. The photograph depicts six cloaked figures wearing horned masks and entering a large church located in the middle of the woods. The figures are indistinguishable from one another and move as a cohesive unit. A waxing crescent moon is depicted in silver glitter, as well as the figures’ masks. The forest background is covered in snow and a simple pathway leads into the church and quickly fades into the treeline. Fog gathers around the figures’ feet and emerges from inside the church, which adds to the mysterious nature of the group and location.

The exhibition continues with a collage composed of six photographs of different sizes, frames, and orientations. They feature figures in various natural landscapes, from the seaside to lush forests, to a lake. “The Transfer” depicts a man kneeling with his head bowed and wearing a cape, handing an unknown object to a woman, who stands gracefully as she holds the end of her long gown. The background is set on a rocky coast with a cloudy and temperamental sky. “A Self Portrait” depicts one of the masked figures featured in “The Passage.” They stand in a valley of grass that grows taller than them and stare directly at the viewer.

“The Lady Shalot” is an octagon-shaped photograph that depicts a seemingly unconscious figure floating on a body of water, surrounded by wildflowers, trees, and lush plants. Light casts upon their body and illuminates the cloth that is draped around them, exposing their midsection. Silver glitter frames the outline of the print and decorates its periphery in root-like designs. Despite their differences in subject and setting, the images in the collage complement each other and are cohesive with Rituals’ thematic storytelling and eerie aesthetic.

“A Faery Haven” depicts a woman sitting on a rocky river bank with a small waterfall in the background, clearly deep in the forest. She wears her hair down and a lace white dress. Her foot grazes the river’s surface as she looks up at the sky peacefully. The woman’s ethereal look and languid pose make her appear part of the natural landscape of the scene, fully belonging amongst the ferns and rocky mountainside as she embodies her role of “faery.”

“The Shape of Nature” encompasses the exhibit’s theme of fantasy and whimsical depictions of nature. The piece features the same subject found in “A Faery Haven” laying down languidly on a natural rock formation. A small stream runs next to the woman’s right side and varying degrees of moss growth, light, and shadow make the rocks differ in coloration. The colorful landscape is composed of gray, black, green, purple, and yellow rock formations.

“Sirens” depicts a woman submerged underwater up to her waist, looking at something off-camera menacingly with her palms flat against the water’s surface. Her long blue hair covers her bare upper body and her lips are painted green. Her body is adorned with a long pearl necklace, a metal wrist cuff, and a leopard print skirt which clots underwater.

If Rituals is a dark thriller, Ephemerally Yours is a supernatural fantasy film. These yin and yang exhibitions are a wondrous rediscovery of the balances found in our own lives and the world around us. Just as there can be no life without death or success without failure, Jennipur Jane shows us there can be no mermaids without ghosts.

Ephemerally Yours and Rituals are on view by appointment until November 27th at The Alchemy of Art, 1637 Eastern Ave., Baltimore, MD.

Photos courtesy of the artist and Alchemy of Art