When she was seven years old, Iona Rozeal Brown’s mother took her to see Bunraku, a form of Japanese puppet theater, and Kabuki, traditional Japanese musical theater. Growing up, Brown became increasingly interested in Japanese Ukiyo-e prints from the 18th and 19th centuries, which depicted the glamour of theater and wealthy courtesans in elaborate, decorative detail. These dramatic depictions of popular culture and a life of pleasure made a lasting impression on Brown, a contemporary visual artist whose paintings, drawings, and videos are on view in the solo exhibition Afro-Asiatic Allegory at the Asian Arts Gallery at Towson University. 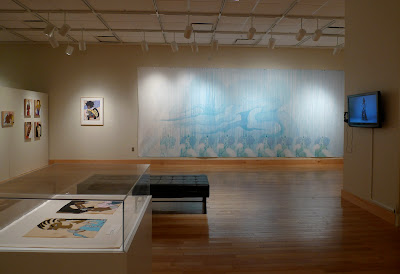 Although Towson University’s Asian Arts Gallery typically exhibits artists of Asian descent, for its fortieth anniversary, gallery director Suewhei Shieh decided to forge a new direction. This year the gallery is featuring non-Asian artists and “how they respond to and connect with their Asian experiences.” The series, titled The Asian Connection Series, includes two concerts and three exhibitions, with Brown’s work as the culmination of the series. 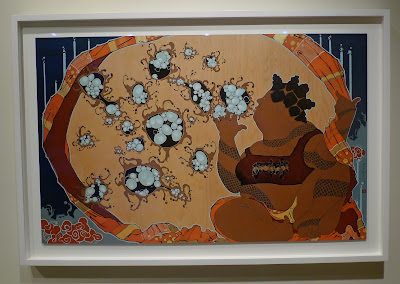 One word used consistently to describe Brown’s work is “mash-up.” The term conjures up a collision of disparate elements into a new hybrid, a passionate merging of opposites. After her initial experience with Japanese theater as a child, Brown became reinvested in exploring the collision of African American and Asian cultures in her artwork, when she learned of the modern phenomenon of Japanese teenagers emulating the fashion and music of American hip-hop culture, copying the fashion and sometimes even darkening their skin to emulate certain performers. In 2005, Brown travelled to Japan to study the practice firsthand, and the trip has continued to inspire and influence the art she produces.

As an African American visual artist and a DJ specializing in hip-hop and go-go, Brown’s ideas about identity in the contemporary world are both exotic and universal. In a world that is increasingly global and multicultural, a number of contemporary artists are using their work to question and envision what it means to exist in between cultures. Within this new genre, Brown explores what it means to be an African American woman, but through the lens of traditional Japanese aesthetics. According to guest curator J. Susan Isaacs, the artist “brings a diverse range of cultural and art historical sources together.”

In several of Brown’s earlier works included in the exhibit, the artist emulates the style of Japanese Ukiyo-e prints, but skews the details in unusual ways. In study #1 in japan, the subject of the portrait has an afro and wears diamond-studded rings, necklaces, and bracelets. The most curious aspect of the portrait, though, is the artist’s treatment of the skin, which is divided into distinct striations—the face is beige, but hand, ear, and the skin around the eyes is brown. In study #2 in japan, the subject wears similar glittering jewelry and cornrowed hair, with the skin divided into similar sections of brown and beige. For example, the eyes, nose, mouth, and ear are brown, but the cheeks, hands, and arm are beige. In both drawings, the flowing, linear outlines characteristic of the Ukiyo-e print is evident and the close-up, cropped compositions that emphasize detailed facial expression make them appear, at first glance, to be Japanese prints. 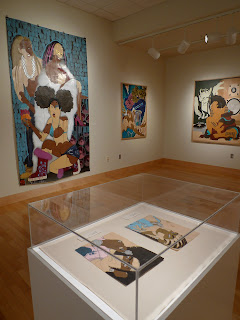 In larger, more recent works, Brown manages to create a style that is more individualized; you would never mistake them for Japanese prints, but numerous details leave subtle clues. In the oobie kids, 2010-11, an imposingly large painting on paper, Brown depicts three scantily clad young women on a pulsating field of drippy pattern. The woman in front wears a bikini top and “hoochie-style” short shorts, embellished Ugg boots, and holds a dripping ice cream cone. Her posture is exaggeratedly sexual: crouching low to emphasize her round posterior, her mouth is wide open and she covers one eye in a peek-a-boo gesture. A second woman, behind her, appears to be naked under a fuzzy white fur coat, with a high-heeled leg placed high for inspection. The composition of the piece bears striking similarities to Picasso’s Les Demoiselles d’Avignon, which scandalously depicted several nude prostitutes in defiant, proud pose. 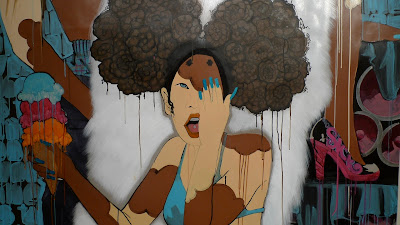 In Brown’s version, it is unclear whether the women are of African American or Asian descent. All three women wear their hair in typically African American styles with extensions, cornrows, and afro-puff pigtails. All three reveal a lot of bare skin, and, as in Brown’s earlier works, it’s composed of sections of brown and beige. All three women’s faces are rendered in both colors, with sections of shoulder, breast, elbow, thigh, and legs in alternating bands. If you were unfamiliar with the artist’s work, this singular image would be both confrontational and confusing. However, viewed within the context of the exhibit as a whole, the oobie kids, 2010-11, is a culminating work: Brown has successfully created her own hybrid aesthetic in an image charged with powerful sexual energy. 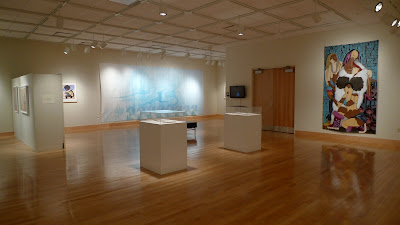 Besides paintings and drawings, Afro-Asiatic Allegory offers viewers a recent innovation in Brown’s oeuvre—choreography and video. Video documentation of the battle of yestermore, an original performance, plays on a revolving loop on a flat screen TV in the gallery. The performance combines Kabuki Theater and Tolkien-style storytelling with hip-hop music and vogueing, inspired by Drag Queen culture. All of Brown’s characters wear elaborately designed costumes, a combination of kimonos, African masks, and urban street wear, and her characters utilize symbolic color relationships, extreme headdresses, and elaborate patterns, as a visual embodiment of the character’s role. The activity on the screen builds into a spectacle of dancing and movement, carefully choreographed into an ecstatic battle of good versus evil, with excessive detail stealing the show.

Afro-Asiatic Allegory will be on display from February 9 through May 12 at the Asian Arts Gallery, Center for the Arts, at Towson University.