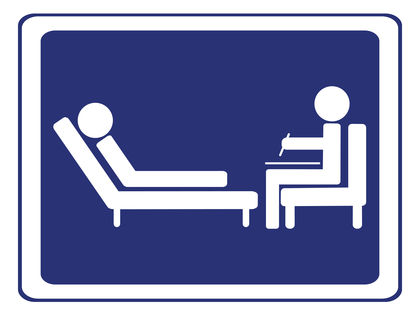 Art Therapy: How Do Artists Make a Living? by Cara Ober As artists we are always engaging in a dialogue. Whether that dialogue manifests itself visually, textually, or even spoken aurally, it is of the utmost importance. It doesn’t matter if the discussion unfolds between the artist and their audience (perceived or otherwise), the artist and themselves, or with another artist. In the case of Painted Woods, one of the exhibitions currently on display at the Current Gallery, artist Ryan Syrell invites us into a his own dialogue that evolves in his studio with the deceased painter Neil Welliver (1929-2005). There are total of nine pieces shown in this exhibition, eight paintings and one installation. All but one of the paintings is a petite 9 ½ inch squares, and the other is even tinier, at 5 ¾ inches. The pieces are painted in acrylic on birch ply or MDF and they range in technique, moving seamlessly from a representational and rigid approach, as seen in “Noon Rocks,” to much more painterly and abstracted technique, as seen in “Brush.” However, all the paintings use the same color scheme, which ranges from lemon yellow to brownish green and bluish gray, so this creates cohesion.

In addition to the small painting series, Syrell includes an installation of reclaimed wood, titled “Painted Woods,” painted by the artist and arranged in vertical stacks in one corner of the gallery. The space given to Syrell is relatively small in comparison with the print show next door but it is curated well enough to accommodate such limitations. However, close quarters invite comparisons and the installation is much more compelling than the paintings. The reclaimed wood varies in color, adhering to the strict color palette, as if the artist has dissected the smaller paintings and translated them into three-dimensional stripes. The entirety of the installation spans about five feet in width and about eight feet, the approximate height of the ceiling in the Current Gallery.

I try to avoid reading artist statements because I tend to be a harsh judge of exhibitions that require an artist statement to understand the work. In the case of Syrell’s work, my experience of viewing the show before reading the statement and afterward are in such contrast with each other that it is worthy of discussion. When you view the work independently of Syrell’s statement, the curiosity of a painter examining the interchangeability of abstraction and representation, and the relationship of both with real space, is apparent. It initially feels experimental, this back and forth between mediums, and in this dichotomy the “Painted Woods” installation is a tool, one that can be arranged in a variety of ways in order to suit Syrell’s needs In contrast, the artist statement insists upon a different examination of the work. By his own admission, Syrell is exploring the processes by which the American landscape painter Neil Welliver created his own paintings. While certainly a worthwhile endeavor, this viewpoint places Syrell in a position that is much less rewarding for a viewer. There is no doubt that artists learn from each other and benefit from the study of other artists, but it’s a one-sided dialogue.

Ultimately what does Syrell gain from his exploration of the working habits of Neil Welliver? Syrell’s paintings analyze and apply Welliver’s techniques, most notably his restricted palette of eight pigments, but in miniature. The size allows the artist to examine certain aspects of Welliver’s style quickly and effectively, but they come off as studies whose main purpose is to benefit the artist. In these paintings Syrell borrows the simplicity of Welliver’s technique: never re-working the paintings and painting from top to bottom. In the new paintings the result is often much more exaggerated and abstracted than Welliver’s, implying that Syrell is more focused on technique than subject matter, which reinforces their role as studies, rather than finished paintings.

Syrell on left, Welliver on right

Syrell gains a number of formal benefits most from this conversation, reworking the genre of American Landscape into the realm of intellectual painting, reestablishing its relevance. In recent years, landscape painting has been underappreciated so, in this context, Welliver is an ideal candidate. His work is considered by many to be the epitome of technical painting without being purely visual and his strict color palette initiates further discussion of painting, technique, and relevance, all of which fall under the umbrella of intellectual discussion. Inevitably, authenticity becomes a concern in work such as this; wherein an artist borrows from the practice of another. As an idea, I find this concern to be mostly irrelevant. Considering the current age of cyber connections between people and the borrowing and sharing content, illegal or otherwise, on the internet, authenticity in its definition has become compounded. Authenticity in not a concern in the case of Syrell on two accounts: the goal for the majority of the work shown is academic, to learn. Second, his work is simply not up to the caliber that Welliver’s is, nothing can replace decades of practice which is probably why he continues to study Welliver. I am certain that Syrell understands and accepts this, which is why I find “Painted Woods” itself to be so interesting. It is a reapplication of technique with a wildly different result, so much so that it is the only choice of the viewer to assume that it was intentional.

The concern here is that Syrell’s exploration is in its infancy; showing too quickly what has the potential to be a very compelling set of artwork. It is “Painted Woods” itself that takes the furthest step forward and shows the greatest promise from this process. While exhibitions showcasing the studio habits of the artists may be praised for their transparency, they operate within a dialogue that is mostly closed to the viewer. This type of examination operates more successfully within a historical context, rather than generating new thought and discussion in a public space. The dialogue being held in Syrell’s studio is one that benefits him as an artist, but in the gallery environment the interaction between Syrell and Welliver is much more difficult engage with as a viewer. Painted Woods will be on view at Current Space through July 28, 2013.

* Author Xavier McNellage is a 2012 MICA graduate and a Baltimore based painter and sculptor.