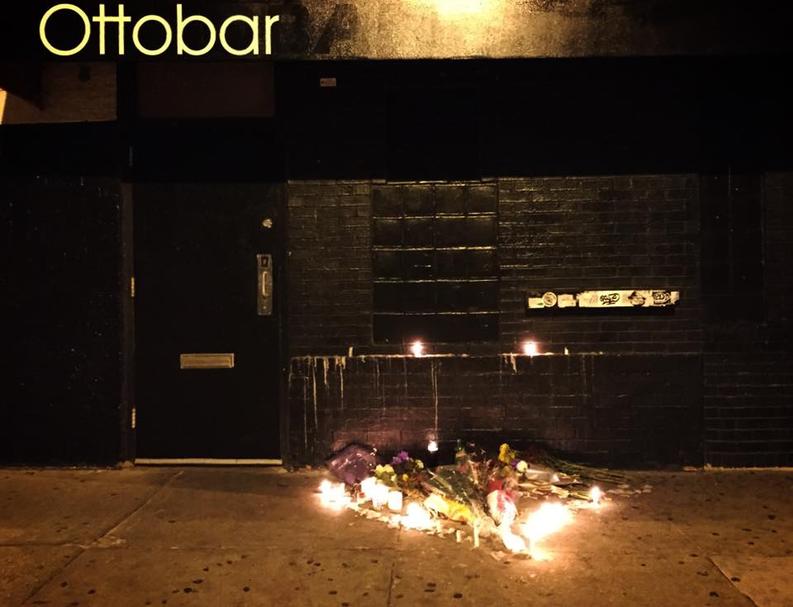 To submit your calendar event, email us at events@bmoreart.com! Our fall calendar is loaded!

CoHosts is presented at the Baltimore School for the Arts located at 712 Cathedral St. The lecture will begin at 7pm with a reception at 6pm. Doors close at 6:45pm. Tickets here.

Sanford Biggers is a visual artist whose installations, videos, and performances have appeared in venues worldwide including Tate Britain and Tate Modern in London, the Whitney Museum and Studio Museum in Harlem, New York, and the Yerba Buena Center for the Arts in San Francisco, as well as institutions in China, Germany, Hungary, Japan, Poland and Russia. He currently lives and works in New York City. His speaking engagement and residency are cohosted with Gallery Four, which maintains six live/work artist studio spaces that surround the central gallery, and is located at 405 W. Franklin St, 4th floor. Joyce J. Scott: Can’t We All Just Get Along? and Paul D. Miller (aka DJ Spooky): Surveillance at Goya Contemporary

Goya Contemporary Gallery is pleased to present a solo exhibition of art by Baltimore-born, Contemporary American Artist Joyce J. Scott (B. 1948). Joyce J. Scott: Can’t We All Just Get Along? will feature several new mixed media works authored by the artist who recently returned from various residencies, notably Venice Projects in Murano, Italy , and Monkey Biz in South Africa.

Alloverstreet (City Paper’s “Best Art Walk that Doesn’t Suck” 2014) is back with the biggest and best installment to date. This month’s event features 10 exhibitions and events spanning 9 arts spaces. This Alloverstreet will introduce an art walk hub at Area 405’s outdoor dock with food, music and information about the night’s event including a new printed gallery guide and self-guided tour map. Additionally, from 8-10, visitors can enjoy a free ride from Alloverstreet to the Idling @ Dusk event at Penn Station and back in a designated taxi cab; a collaboration between Alloverstreeet and Living Station Nights. Alloverstreet exhibitions and events include:

*This expanded Alloverstreet is made possible with support from The Station North Arts and Entertainment District and The Baltimore Office of Promotion & the Arts.

Come meet the man behind some of Baltimore’s most iconic concert posters and take home a piece of Baltimore music history. The show also features free performances by indie rock band Jaabs and Sara Kryscio of Ms Sara and the Help. The show is made possible by New Belgium Brewing and proceeds benefit WTMD. BODEGA PRESENTS: KEEPING A CLOSE EYE ON THE WIND

Bodega is happy to present Keeping a Close Eye on the Wind, a two-part exhibition by Joshua Abelow and Gene Beery at Freddy in Baltimore and Bodega in New York.

Both exhibitions have developed from an ongoing correspondence between the two artists over the past two years and bring to life the nature of the artists’ predominantly online relationship.

The exhibition at Freddy consists of ten collaborative photographs shot by Abelow in New York at Bodega and altered by Beery’s inclusion of poetic text in response to each image. Mediated by each artist, the resulting works serve as precursor, evidence of, and aftermath to the collaboration. The Baltimore American Indian Center Heritage Museum proudly presents Hard Workin’ Pilgrims: Lumbee Indians in Baltimore City Industry. The exhibit, which features photographs, oral histories and material cultural artifacts of Baltimore’s first generation of Lumbee residents, will open on October 1, 2014. On Saturday, October 11, 2014 there will be a reception and panel discussion with Lumbee Elders from 1:00 to 5:00 p.m. (panel 2-3 p.m.).

Thousands of men, women and children of all nationalities and races propelled Baltimore into the Industrial Age. After the second World War, there too was a large migration of Lumbee Indians from rural North Carolina to Baltimore City. Like other groups, they came seeking employment in order to improve their quality of life. They settled in Southeast Baltimore, concentrated in a 64-block area from Broadway Street to Patterson Park. This became and remains to be the largest Lumbee community outside of Lumbee tribal territory in existence. With them, these Lumbee brought their culture and traditions, which they have kept and shared in our city over the years. This exhibit and public program spotlights some of their little known history, their contributions, their legacy in Baltimore.

Previously at the Baltimore Museum of Industry, join us to welcome this exhibit home to the heart of our community, the Baltimore American Indian Center Heritage Museum. Admission to the reception and panel discussion is FREE to the public. Admission to the Museum during the month of October is FREE in connection with Free Fall Baltimore.

This exhibit and public program was funded by the Maryland State Arts Council Maryland Traditions Program and the Baltimore Office of Promotion and the Arts. The Creative Alliance is proud to announce 3 Strategies for Surprise, an exhibition of new artwork by well-known, locally-based artists Lyle Kissack, Gerald Ross, and Renee van der Stelt.  The work of these three artists spans a wide spectrum of contemporary art practice, yet each favors a process and an outcome that in many ways relies on the element of “surprise.”  The nature of the drawn line and its capacity to express ideas is a vital component to the work of each artist.  Seen together, the works offer unique possibilities for activating and resolving blank surfaces with a surprise for the viewer, whether it is on the wall, page, or gallery floor.

Lyle Kissack’s paintings are poignantly infused with color and light. Essential to his process, drawing is coupled with the layering of appropriated and found images, building towards a surprising narrative.  In this installation, Kissack overwhelms the viewer with a flow of visuals through the stacking of his prodigious output.  He offers the viewer a choice in the construction of narrative.

Gerald Ross relies on a scant and absurdist awareness of history, Americanism, and Modernist painting to initiate his small, ‘quasi-narrative’ works. The surprise for Ross comes from looking at subjects from the corner of his eye and taking a chance on a process that is foreign… or at least lights a way to an unexpected path.

Renee van der Stelt creates luminous drawings for the wall – grids that are painstakingly precise, but also drawings that rely on the randomness found in nature. The sterile data based on the human condition, creates an irony paired with the precarious situations that arise within any given day.  Light, shadow, and the line of van der Stelt’s hand lead to the surprise moments of failure and alteration.

The exhibition itself will be punctuated by a series of alternative drawing workshops hosted by van der Stelt that use drawings created by viewer-participants to explore how movement throughout the gallery creates drawings.  A performance of these viewer-produced movements will take place on Saturday, November 22nd from 3:30 – 5:30pm.  Kissack, Ross, and van der Stelt will also host an informal gallery talk on Saturday, November 15th at 5:00pm to provide direct insight into their individual and collective methods of surprise. Every-Day Heroes to Super Heroes; Beyond the Call of Duty Rough Trade Episode III: Attack of the Clones at the Sidebar

THE RETURN OF BALTIMORE’S FREE ALTERNATIVE QUEER NIGHT! FOR EVERYONE TOO WEIRD, POOR, UGLY, OR DIRTY FOR GAY BARS. ♥ ♥ ♥

THIS MONTH’S COSTUME THEME- CLONES!
FROM THE 1970’s GAY BAR “CLONE” UNIFORM TO 80s CYBERPUNK REPLICUNTS AND 90s SHEEP, CLONES HAVE ALWAYS BEEN SEXY. COME AS ONE OF THE ABOVE, DRESSED AS YOUR EVIL TWIN, OR IN DRAG AS YOUR BEST FRIEND AND BRING THEM TOO. PRIZES FOR BEST LOOKS!