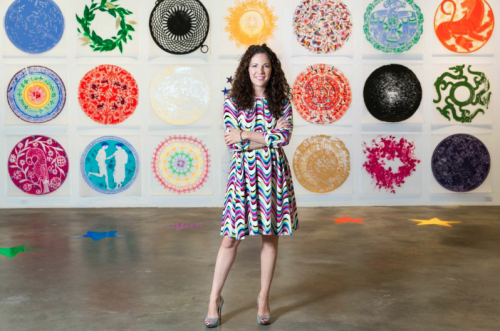 Dallas in Baltimore in Dallas 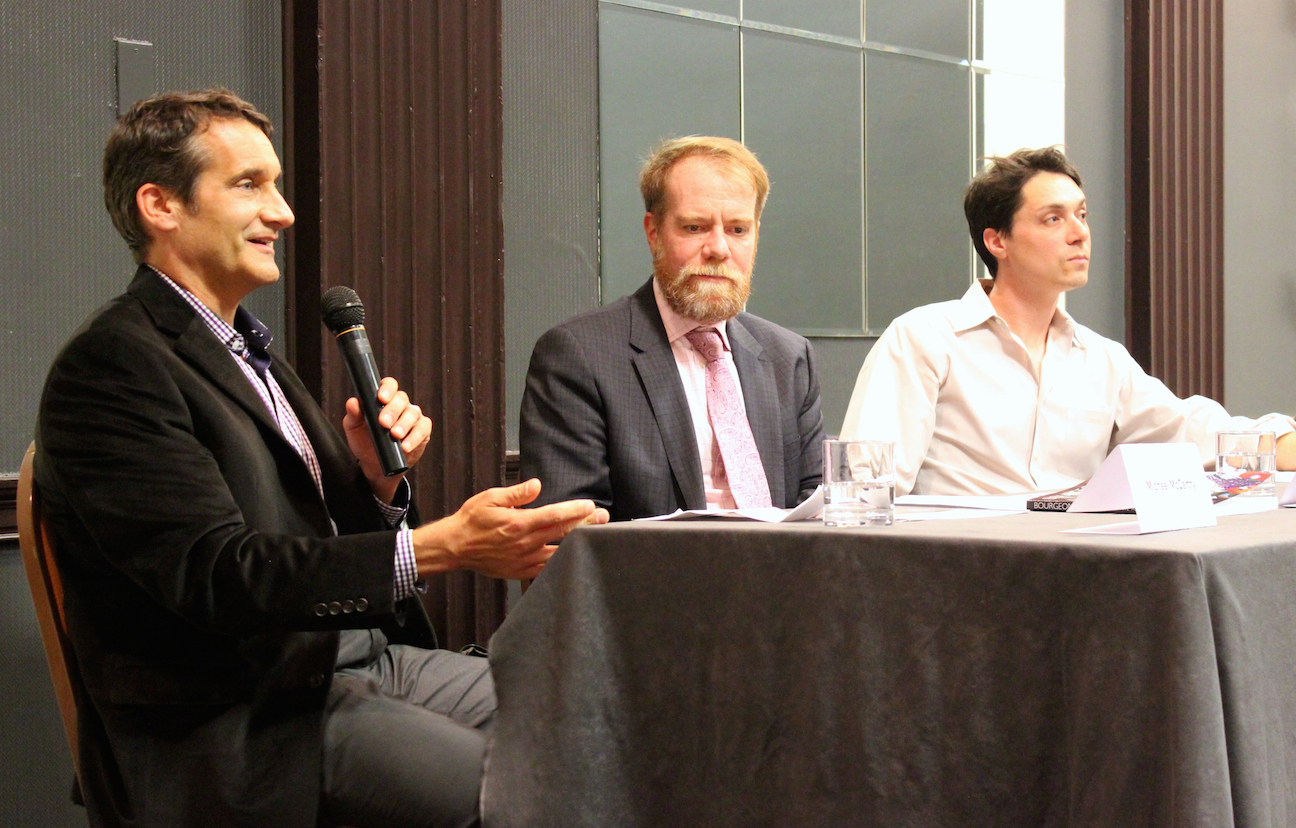 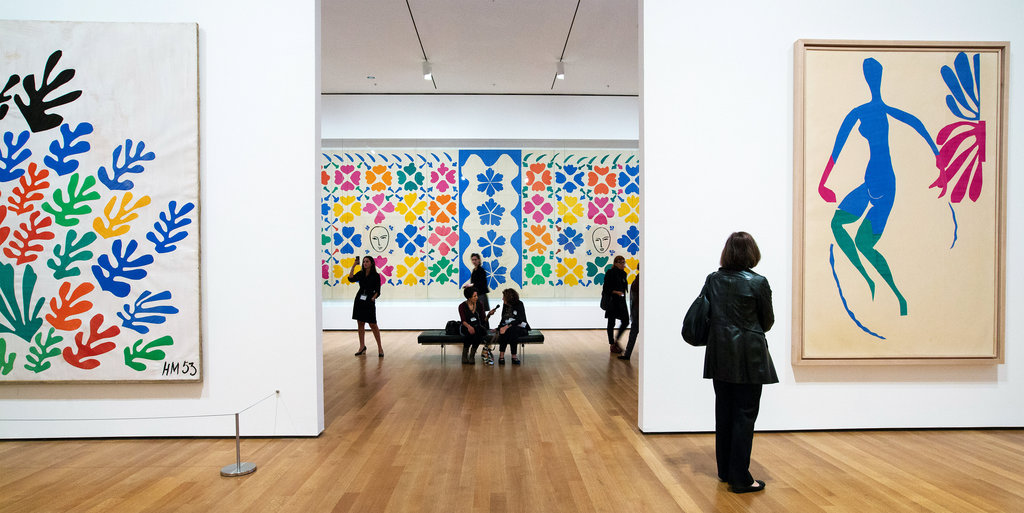 Warhol looks stunning on a coffee mug, but Matisse not so much. This doesn’t necessarily mean that Warhol was a hack and Matisse a genius, but it might. Regardless, there are certain images that look better on art schwag than in their original state, or at least just as good, and others that suck on a postcard or tote bag.

For better rather than worse, Matisse’s works must be consumed in person. In a poster or print, the subtleties of light bouncing through colored surfaces and the esoteric personal marks that make these pieces sing are erased. What you are left with in a Matisse copy is bland and sloppy graphic design.

That doesn’t mean the MoMA gets this. ‘Henri Matisse: The Cut-Outs,’ which opened October 12 after an almost identical exhibit at the Tate Modern, features high volume images plastered all over the museum, a needless effort in advertising the mega-popular exhibition of approximately 100 of the great master’s collages made at the end of his life. Although Matisse is a much loved icon, a celebrated genius, and a mass marketed brand, what’s striking in the midst of all of it is the breakdown of the work in reproduction.

The crowds waiting in long lines, assigned to visit in half hour intervals, obviously understand. Either that or Matisse has reached the familiar plateau of the Impressionists, where everyone loves them because they’re supposed to and no one really knows why. Milling around in MoMA’s crowded galleries, I hear expressions of delight, murmurs of ‘genius’ and ‘brilliant.’ From across a room, the soaring shapes on simple white backgrounds ooze pleasure and a humble congeniality in a way few works achieve today. Matisse’s cutouts are pretty. Like patterned wallpaper, bold fabrics, and other decorative surfaces, they beckon with lush color and bold blacks. But they’re so much more than this. Up close, the frenetic messiness of them is shocking. There are scrawls of pencil hastily erased off of the painted paper surfaces, leaving a palimpsest of past decisions – a treasure trove of insight into the great master’s thought process, which is rife with surprises.

The iconic shapes which first appear to be cut from one solid piece of paper expose themselves to be layered conglomerations, where similar but not exact color scraps are laid on top of one another to augment the shape. And then there’s the reality of gouache painted paper, which reveals intricacies of textural paint application even as their surface buckles in spots, with the edges beginning to curl. It is, after all, paper. And paper loses its perfect flatness when it is wetted and dried.

The delight in these details comes from experiencing the impatient fervor of the artist, the pleasure he took in placing shapes and color and then changing his mind. These details hint at a process that was neither linear nor decisive and gives all of us permission to create passionately. It’s infectious. From a distance, you miss all this and the impression of monolithic, deliberate decision-making is exclusive and impenetrable, a product to be worshipped but not conversed with.

This is most apparent when you have the opportunity to compare Matisse’s paper sketches to their translation into another form. In Nuit de Noël (Christmas Eve) 1952, you view an 11 foot tall gouache on paper mock-up of a stained glass window next to the window itself, which was fabricated by Paul Bony in Paris to hang in Rockefeller Center in 1952. Although Bony’s color samples and tracings are also available for viewing and he did an admirable job of translating the Matisse into richly hued glass, the two formats are worlds apart.

“For me,” comments a well-dressed woman standing nearby, “I’d have to start this one over right there.” She jabs her finger towards a spot where curling paper creates a gap between layers of color, as if it is a mistake, and I think, This spot is exactly why I prefer the paper maquette to the glass.

There’s a life and liveliness in that lumpy paper surface, and light that bounces through the pigmented white paper underneath that escapes the stained glass version. In comparison, the window’s colors are too even, it’s black outlines too uniform; more like a Murano glass chandelier with faux fruit compared to the original. While the glass version is beautiful, there are no surprises, no smudges. The stained glass image could be printed, posted, and plastered anywhere and it would be consistent with the original, but the sketch is elusive and full of life.

Heading into the next gallery, you have the opportunity to be surrounded by Matisse’s much beloved series of Blue Nudes. Larger than you would expect, around 40 inches tall, each is slightly different and boasts charcoal lines, erased many times, to form an activated negative space balancing the iconic indigo figures. The interchangeability of each figure, along with the slight changes between, reveals a process much more fluid and mutable than one would suspect from such monumental images.

In reproduction, the blue nudes appear to be cut from one decisive shape; in real life they are anything but. Layers of subtly different blues build these shapes, offering insight into the almost Photoshop-like process of adding in layers and removing them, maybe even indefinitely, until he reached an arbitrary stopping point. This is a hugely important affirmation for contemporary artists whose process is an evolution, rather than a set of goals achieved.

The centerpiece of this exhibit is The Swimming Pool, acquired by MoMA in 1975. This immersive work was originally pinned on the walls for the artist’s contemplation, enveloping him as he cut paper and directed their composition from his bed. Although the work underwent a vast conservation effort at MoMA and is displayed on pins rather than pasted down, as it was originally hung, it falls flat.

The Swimming Pool is hung in a room with the exact proportions as the original, but it’s carefree, casual energy is missing. Possibly it’s the antiseptic layer of glass, a necessary evil, which separates you from the walls and the physicality of the paper, or it’s the wan burlap color of the walls? Or is it the lack of natural lighting in the room? This is the only room in this exhibit that feels like it’s trying too hard and the work is not allowed to breathe. Perhaps some of the original furniture, like the zebra-printed lounger seen in the photo above, would provide a necessary context? How amazing would this experience be if you were allowed to view it, as Matisse did, from a bed?

Heading out to the last gallery, the show is revived by The Parakeet and the Mermaid, 1952, a roiling jungle approximately 25 feet long. Floating tumultuously on a white background, repeated Matisse-wonky shapes of leaves and pomegranates are contrasted with a bird and a headless, dancing female form in blue. On the wall, you can see three earlier versions of the piece where Matisse pasted in the blue nudes from several rooms back. Seeing this process, a light clicks on: he was figuring it out as he went along. He didn’t have a master plan for this iconic work and the figure he eventually settled on might not look as good as some of the earlier incarnations. Catalogue text reveals he thought many of these pieces were failures. This indecisiveness and changeability is not a sign of weakness – it is what makes these pieces great. If there were no ‘mistakes,’ these cutouts would be nothing more than wallpaper. As they are, if you let them wash over you and you indulge yourself in their tiniest imperfections, they invite you into a buzz of pleasure. Sure, you can complain that the pleasure is a sexist, imperialistic one, where beautiful women are nude and fabrics come from exotic and ‘oriental’ places, but you’re missing out. The real joy comes from the permission to create, and the submission to that maddening, passionate act, even when you are old and sick and can’t get out of bed.

If you love Matisse and especially his cut-outs, you need to see them for yourself, even in a crowded gallery after waiting in an obnoxiously long line. There is no reproduction that can effectively harnesses this power. There is no product that even comes close to conjuring up the authentic, almost naked, revelations that these works provide.

Henri Matisse: The Cut-Outs will be on display at the Museum of Modern Art in NY through February 8, 2015.