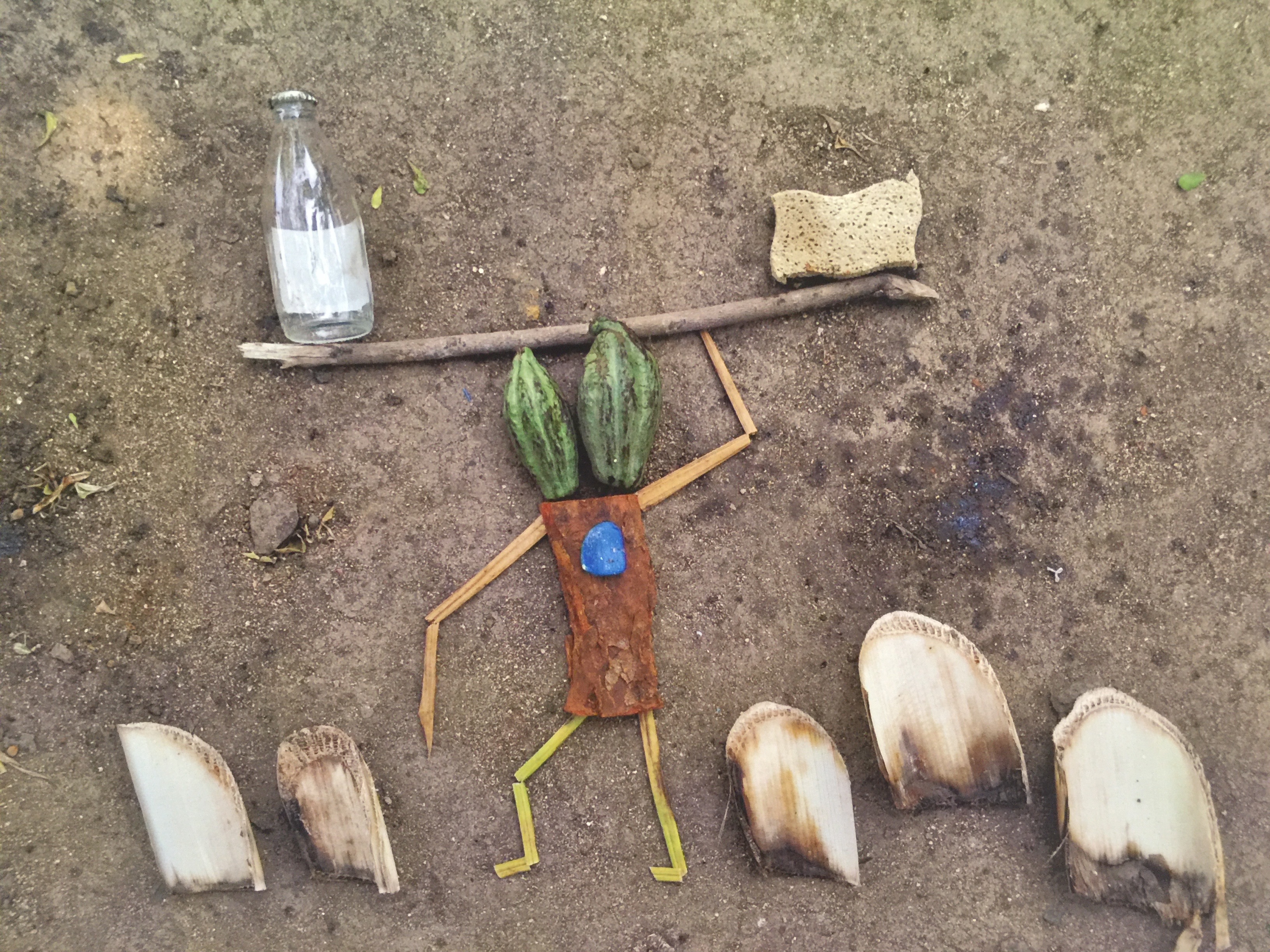 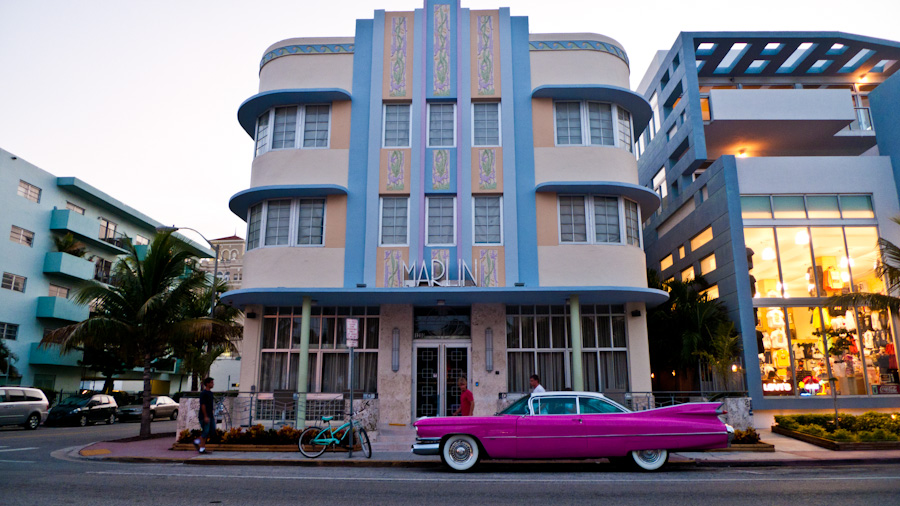 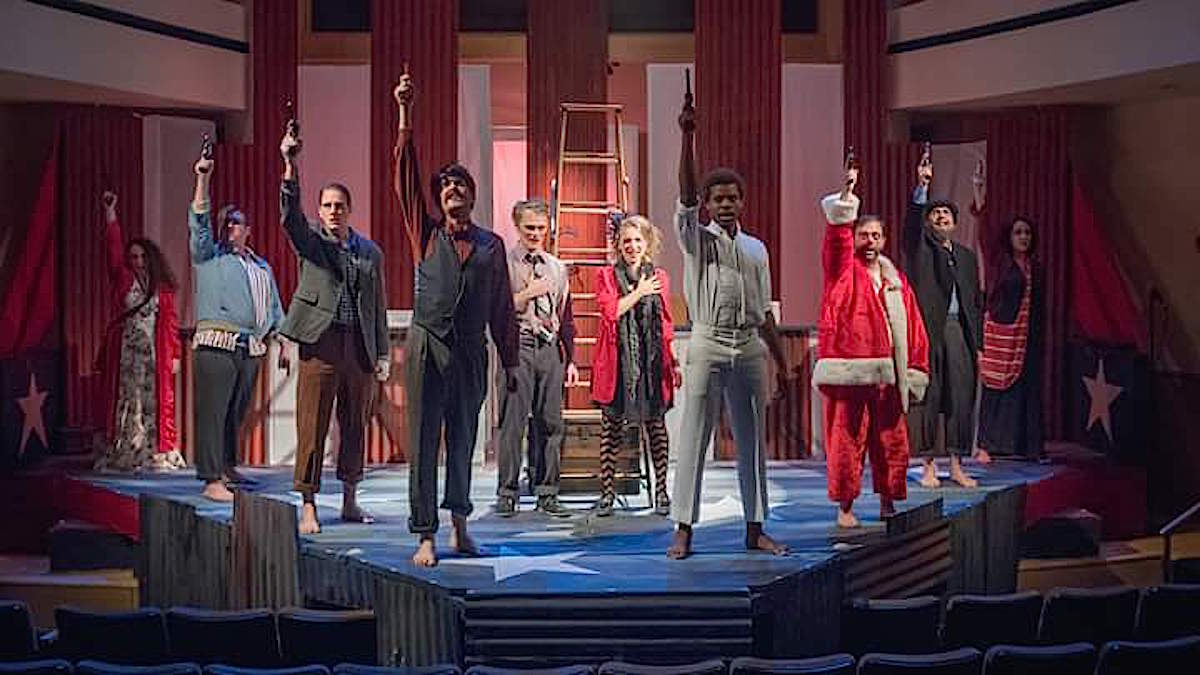 Of course John Hinkley sings a love song. Before this rich kid of an oil family failed to kill President Ronald Reagan on March 30, 1981, he had tried his hand at songwriting out in Los Angeles. It didn’t take. And in Stillpointe Theater Initiative’s, in partnership with the University of Baltimore’s Spotlight UB series, intelligently entertaining production of Stephen Sondheim’s Assassins, Jim Biernatowski plays Hinkley like a portly, introverted sad sack with unfortunate hair, oversize eyeglasses, a disheveled wardrobe that screams creepy guy hanging out at the mall.

So when it comes Hinkley’s time to tell his story in this brisk, roughly 90-minute production, he sings “Unworthy of Your Love” in a duet with Manson Family alumnus “Squeaky” Fromme (Chelsea Paradiso). It’s a here-comes-those-tears-again 1970s soft-rockish number about how he’s no good, even though Johnny’s in love. Of course. He’s the kind of sad sack lone gunman whackjob who thought he could curry Jodie Foster’s favor by killing the president. Is that all he is? Ryan Haase, this production’s director and scenic/costume designer, recognizes that Sondheim and his Assassins co-writer John Weidman’s barbed book aims to complicate those comfortable assumptions we make about the seven men and two women who killed or tried to kill presidents of the United States.

John Wilkes Booth (Will Emory) shot Lincoln in 1865; he was shot and killed by a Union soldier. Charles Guiteau (Patrick Martyn) shot James Garfield in 1882; he was hung. Leon Czolgosz (Brian Krszewski) shot William McKinley in 1901; he was executed in the electric chair. Giuseppe Zangara (Lawrence D. Bryant, IV) tried to shoot Franklin Delano Roosevelt in 1933; he got the chair, too. Samuel Byck (John C. Wilson) planned to kill Nixon by hijacking an airplane and crashing it into the White House in 1974; the plane never left the Baltimore/Washington airport, and he shot himself instead. Both Fromme and Sarah Jane Moore (Ashleigh Haddad, a comedic treat here) tried to shoot Gerald Ford in 1975; Fromme was given a life sentence and paroled in 2007, Moore was paroled from her life sentence in 2007. Hinkley was sent to St. Elizabeth’s psychiatric hospital; his requests to live outside the hospital have been denied. Some of their stories are well known; others, less so. Assassins gathers these figures into a single room where their tales are sung in a revue-like fashion. Haase’s set design makes this onstage place feel like a patriotic dive bar gone to seed. Vertical red and white slats form the backdrop and fronts of the bars onstage; white stars on blue fan out on the wings. A single ladder stands center stage, from which each of the assassins selects a gun from the proprietors (Kevin Cook, Jamie Yates) at the plays’ start. A balladeer (a wonderfully insouciant John Schratwieser) serves as the evening’s host.

The cast and production team succinctly zero in on Sondheim’s upending of the so-called American dream in this musical. By allowing each character to sing about themselves, their character arcs allow them to grow from virtual unknown to us having a fair understanding of why they felt like killing. The stories are often heartbreaking. Krszewski’s Czolgosz is a child of Polish immigrant, his hands perpetually wrapped in dirty bandages due to the burns he endures working the furnace in a bottle factory. He follows Emma Goldman (Donna Fox) around on her activist tours, city to city, as enamored of her as he is of her revolutionary ideas. In the “Ballad of Czolgosz,” the balladeer sings that “Some men have everything/ and some have none,” all while President McKinley proclaimed that “in the U.S.A./ you can work your way to the head of the line.” Czolgosz’ life had shown him how untrue that sentiment is. Zangara knows what he’s talking about. In the wildly entertaining “How I Save Roosevelt,” Bryant sings about not having any school as a boy and working in a ditch as a man, where the “smart and rich ride by/ don’t give no glance.” He looks around at the world and sees “No good, no fair, nowhere” because “men with the money/ they control everything.”

Byck knows where they’re both coming from. In a knockout reading of Byck’s monologue, Wilson, looking like a bad Santa in a stained t-shirt and taking occasional swigs of beer, talks about being an out-of-work tie salesman and wondering why everything is so hard, addressing Nixon in absentia: “The Democrat says he’ll fix everything, the Republicans fucked up. The Republican says he’ll fix everything, the Democrats fucked up. Who’s telling the truth? Who’s lying? Someone’s lying. Who? We read, we guess, we argue, but deep down we know that we don’t know. How can we? Oil embargoes, megatons, holes in the ozone. Who can understand this crap? We need to believe, to trust like little kids, that someone wants what’s best for us, that someone’s looking out for us.” By the time the ensemble sings “Another National Anthem”—one for the people who “can’t get into the ballpark,” an underclass that hears the screams behind the American dream—Assassins has lodged a fair argument that the kooks, crazies, and wingnuts who grab a gun and go after the country’s leader are as much products of the country as baseball and apple pie. After each of the assassin’s story is told, the others applaud him or her at the end, as if they’re tall tales at the bar. This raucous, ribald atmosphere makes this Assassins‘ main stage start to feel a bit like the flophouse saloon in The Iceman Cometh, the assassins akin to the convivial and politically minded down-and-outers in Eugene O’Neil’s sobering epic, just sitting around shooting the shit and waiting for Hickey to show up and get the party started.

And who’s the messianic iceman in Assassins? Why, Lee Harvey Oswald (Jon Kevin Lazarus), the assassin’s assassin. The one closest to when we live now. The one around which the most mystery revolves. The one who killed the most hopes and dreams. The one mass media catapulted into mass conspiracy theory. Haase’s stage design puts a ladder center stage; it gets moved around and treated as a prop, but not until Oswald shows up does somebody climb up it with a firearm to take aim. It’s a small but elegantly aware stage direction that dramatizes what Sondheim is saying here: that these desperate nobodies somehow convinced themselves that the only way for them to climb from the bottom of American society and be seen was by picking up a gun and squeezing the trigger. That sentiment has been amplified—and become more politicalized—since this musical debuted off-Broadway in 1991 due to the regularity of gun violence in America. What makes Assassins still feel a bit daring today is how it refuses to demonize its killers. It doesn’t excuse them. It allows them to indict themselves with their own flawed logic. And it certainly doesn’t condone their acts. But it also isn’t afraid to point out that the gun-toting psychopath next door who goes completely off his/her rocker and resorts to killing was molded, shaped, and manufactured by the country in which he or she lived.

The final two performances of Assassins are November 6 and 7 at the University of Baltimore’s Wright Theater. Purchase tickets here.