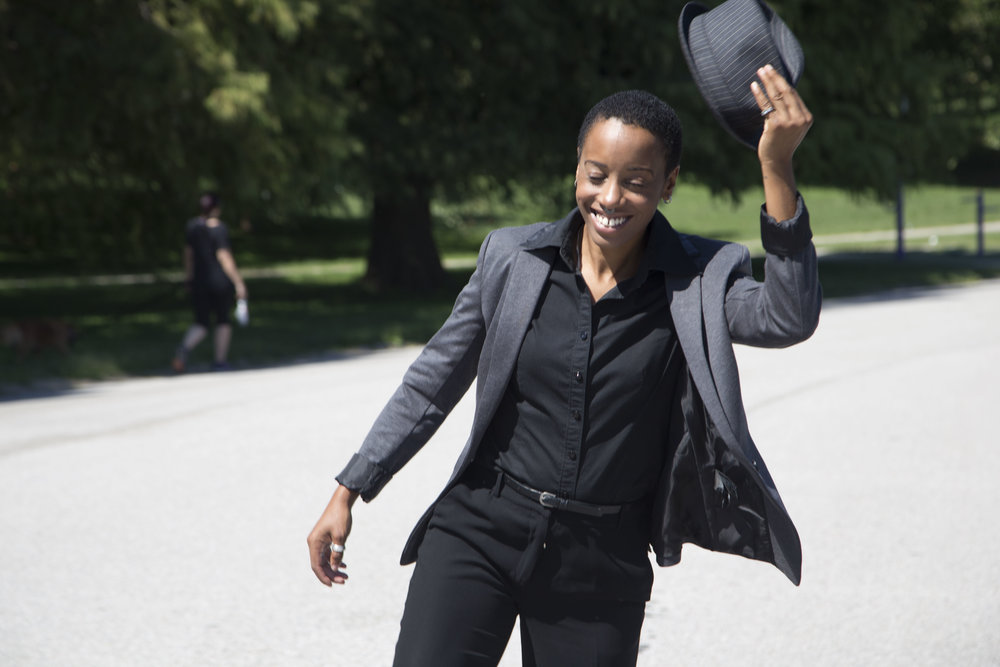 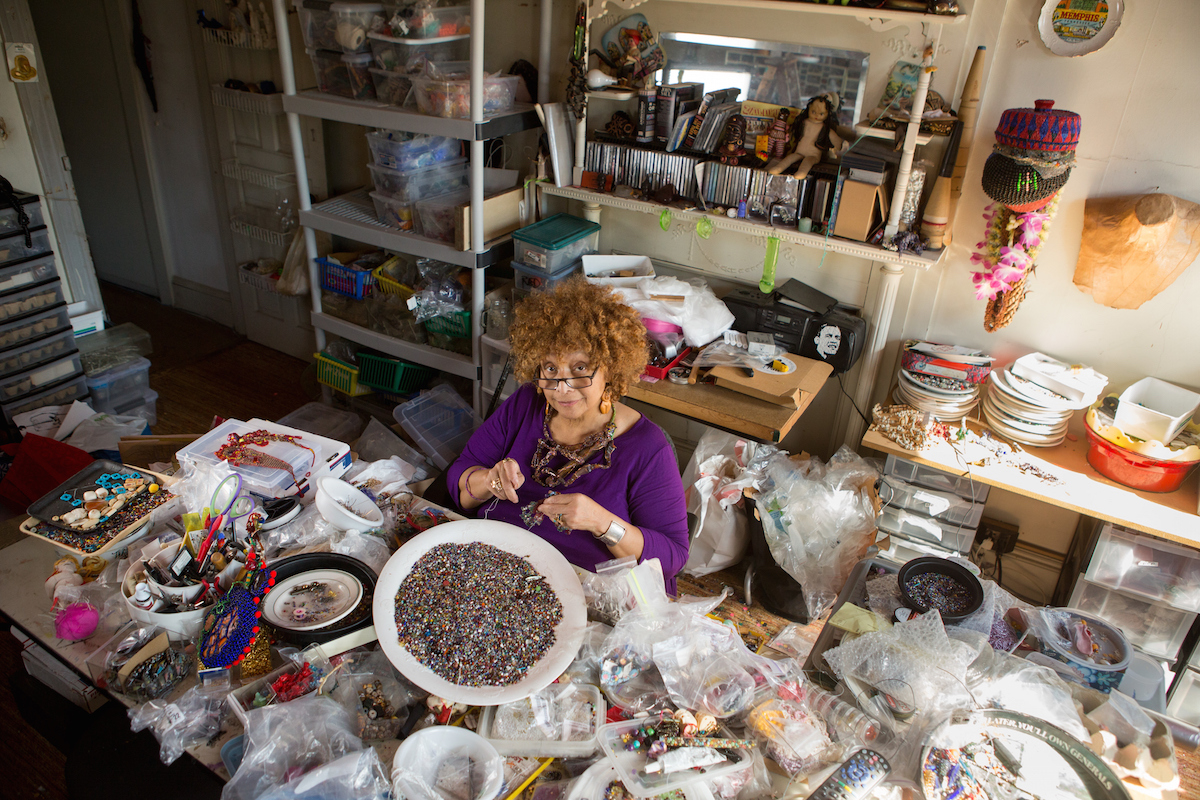 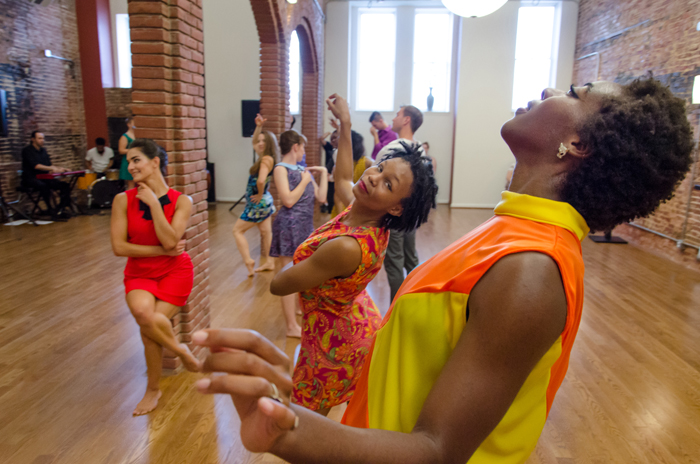 With Photos by Zachary Z. Handler

By 6 pm on Saturday, I was bushed. After five hours of walking, sweating, watching, sweating, sitting, watching, and walking, I was ready to lay down and never get up. AKIMBO can make you work if you’re not prepared, but even with some of Baltimore’s good ol’ late summer weather (87°/80% humidity, one or two terrifying cracks of lightning, and some rain) it was a joyful afternoon of movement.

AKIMBO, the annual dance performance consisting of over a dozen companies and artists set up in local businesses and venues throughout Station North, is reached its fifth year. Co-founded by Nicole Martinell and Sydney Pink in 2012, the event has featured over 40 companies and artists during its lifetime, ranging from modern to contemporary to traditional to experimental.

The free event is “one part within the larger mosaic,” Martinell wrote in an email conversation. “It’s a puzzle piece that puts dance and movement art in the forefront; that makes audiences members see buildings, cafes, grassy knolls, and bridges in Station North in a new way; that offers free events to the community; that introduces new faces to the district; and that supports the current businesses.” By partnering with such venues as Area 405, Station North Arts Cafe, and the Montessori School, audiences explore familiar and new corners of Station North as they travel from location to location.

The map—a beautifully designed document with artwork by Jimmy Malone that turned into a sweaty, wrinkled, folded mess in about ten minutes—wasn’t laid out with any hierarchical order of operation. You just pick a place to start and hope you make it to the end, so that’s what I did.

My first stop was Sarah Smith at Motor House (the newish multi-use arts space on North Avenue), as good an entry as any into Akimbo’s aesthetic wheelhouse: approachable modern dance with a cleanly designed set.

Smith’s installation—silver tinsel curtains, a large black mesh triangle, white balloons, and pastel rainbow cellophane—felt on point for a live music video. And if the trio of dancers weren’t left with a ton of space of their own, their choreography was subtle and uncomplicated whether they followed each other in tender unison or allowed a solo to develop before reforming as a trio. The Collective took over The Windup Space and successfully tweaked the experience one expects in such a traditional music venue. While a trio danced on the stage at the back of the bar, pairs of dancers moved through the audience’s space holding large swaths of blue cloth and cutting off sightlines at odd angles—a familiar dynamic if you’ve ever gotten a drink at the bar and turned to look at the stage and instead have an enormous pillar in front of you.

The blue swatches toyed with depth and perspective, one minute turning the trio into background movement, the next minute drawing all emphasis to the stage. Eventually, audience members were invited to put on available headphones synced to the same song and have an outwardly silent party in the middle of the dance floor. Non-participating audience members witnessed a silent and hilariously fun flailing of the limbs, which lead to a planned line dance lead by the company’s dancers that I tried and failed to join. The Station North Arts Cafe is one of my favorite Akimbo venues. Three years ago Vincent Thomas of VT Dance conjured a piece of the Harlem Renaissance inside the small cafe, mixing literature, intimate (but not uncomfortable) social dancing, and audience participation.

Zoe Cleous & Artists weren’t as imaginative with the space this year, but they nonetheless created a compelling work that borrowed phrases from pedestrian movements (shuffling around chairs and tables) as well as modern dance (two seated dancers whom I thought were audience members entered the space by melting out of their chairs).

At one point, four or five dancers joined hands in the middle of a table, creating a brief sculpture of bodies in the cafe. It was a beautiful moment and one of the more enduring images.

AKIMBO bills itself as a site-specific dance festival, though as often as not the performances are merely adapted to a space as opposed to being inspired by and conceived within the venue. It can be a little disappointing to see beautiful, unorthodox venues used in such traditional fashions. Full Circle Dance Company did little with its space at The Crown and Vaught Contemporary Ballet appeared uninspired by their outdoor staircase setup (though I did catch them at the end of the hot and humid day). ReVision Dance Company had the whole Penthouse Gallery in the CopyCat to itself but the performance—involving audience members moving, stacking, and dancing around small but heavy dodecahedrons around the floor—came off flat.

Movieous Contemporary Ballet glided around City Arts Gallery with severe faces and little dynamism. But, an AKIMBO volunteer and someone from the company shushed a young girl who enthusiastically and delightfully tried to mimic the dancers, which seemed over-zealous considering the atmosphere and overall informal vibe of the event. There were other performances that, despite their uninspired choreography, nonetheless coaxed dozens of audience members to dance and laugh and that sort of experience can make the whole day worthwhile. There was something for everyone at AKIMBO.

Deep Vision was able to tunnel into the past and create perhaps the most engaging audience friendly performance of the day. Set up in the Chesapeake Building, Nicole Martinell’s company recreated the heyday of the building’s past. After a warm greeting by four white-gloved volunteers, I was directed to the second floor, a Pinterest-perfect Yoga studio.

In the corner a jazz trio cranked out joyful standards for the company members and audience alike. Individual dancers invited the crowd onto the dance floor—when I first walked in I could not tell where the audience ended and the performance space began—and in one-on-one settings passed on snippets of historical factoids about the building. The energy, infectious and freeing, lingered with me as I went off to the next location. Movement artist Peter Redgrave and composer/longtime collaborator Khristian Weeks created the most original and wonderfully bizarre performance of the day on a boiling hot corner of Greenmount and Oliver Street by the Copycat Building. While Weeks played guitar, Redgrave sang the classic Elizabeth Cotton tune “Freight Train” (with Penn Station’s train tracks visible over his shoulder) while standing in socks a step away from his boots.

Once the song was over, he laced up and walked to a stack of milk crates and a wooden step stool near the wall of the building. As he climbed, crawled and stacked himself on the objects, Weeks dutifully grabbed the crates and placed them in front of Redgrave, who kept his body as parallel to the ground as he could, his legs mimicking a walk along the side of the building. They slowly worked their way down the block. The effect was humorous and a little stressful. Redgrave worked up a real good sweat keeping his body off the ground and Weeks kept looking for different ways to stack the crates. The Station North Tool Library didn’t host any dancers, but it was transformed into a kinetic sculpture by Noa Heyne. Black ropes with wooden handles hung from pulleys in the rafters. Passers-by pulled on them to discover which sculpture they could command. It was a straightforward concept executed perfectly, a nice variation on audience involvement.

I feel as if I’ve barely scratched the surface. There are still so many images I want to convey, such as Noelle Tolbert and Alexander D’Agostino taking over the BAMF Cafe with their visceral, slow-burning duet, or Baltimore Dance Project’s excellent red jumpsuits and live accompaniment at Area 405. AKIMBO has delivered—again—an incredible and incredibly varied amount of dance in a single afternoon. This is a serious accomplishment. AKIMBO tries and succeeds to make Station North as much a part of the experience as the movement. It’s one of the event’s most enduring qualities. I returned home with an aching lower back—a small price to pay for a chance to get a little closer to my city.

Photographer Zachary Z. Handler received his Bachelor of Fine Arts in Photography from UMBC in 2003. Handler has provided community and access programs for persons with disabilities for over twelve years as well as arts education classes to deaf and hard of hearing youth in foster care both nationally and internationally. Currently residing in Baltimore, Maryland, Handler enjoys the appropriation of found objects, the company of good books, and the color pink. See more of his work at www.zzhandler.com and www.zzhandler.com/blog.

The 5th Annual AKIMBO Dance and Movement Art Festival occurred on Saturday, September 10, 2016 from 1-6 pm all around the Station North Arts District in Baltimore.