The Year of Yes: Preaching in the Church of New Music 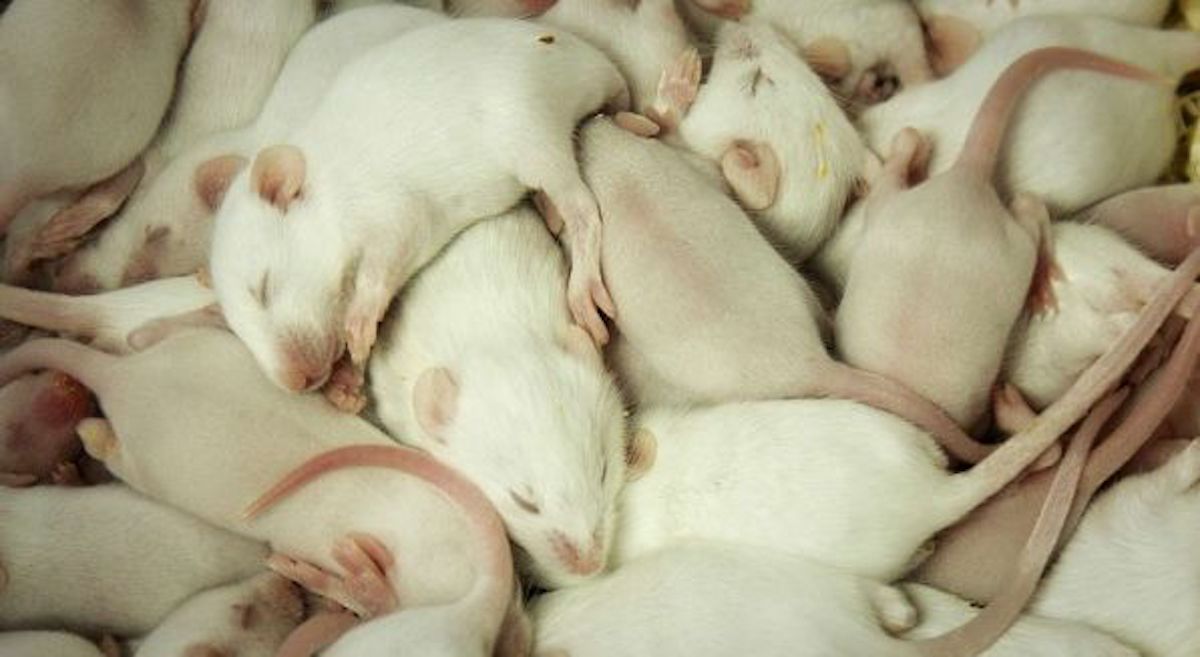 Rat Film and the Artistic Privilege of Representation

Performance: Music, Theater, & Dance
The Year of Yes: Preaching in the Church of New Music 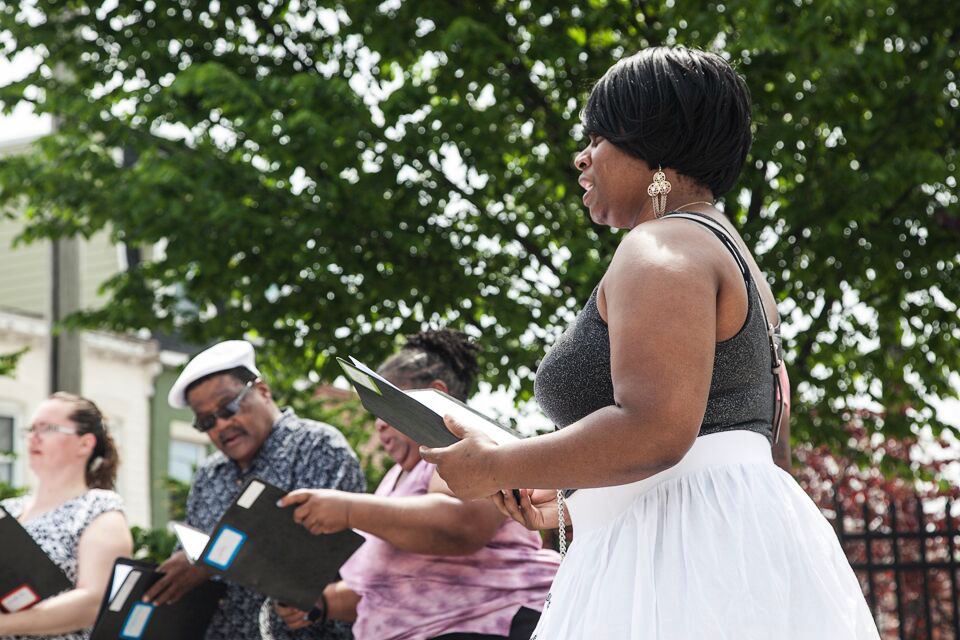 “Remember me, Humidity?” It’s not even noon. Your clothes stick to your body. It’s the first hot Saturday of the year in Pigtown.

Undaunted, a crowd builds in Ward Street, by the Paul’s Place Outreach center. Children giggle, beachballs are tossed and caught, free granola snacks clamored for, women chatter: it’s the annual “Spring into Fitness” fair. Out of the chaos, voices rise. A small band of six singers clusters around their director, Dr. Douglas Buchanan. His black shirt sleeves are rolled above the elbow. It’s about fifteen minutes until they give their very first public performance.

Finally, after a frenetic half-hour where at first the ensemble had no electricity, they are about to go live through the speakers to spread their song all the way down the street and around the neighborhood. One or two of the singers are nervous. A tall, broad fellow in a dusty black shirt wipes his brow with a white towel around his neck. Buchanan reminds them, “No matter how hot it is, today we’re giving the gift of love, the gift of music.” 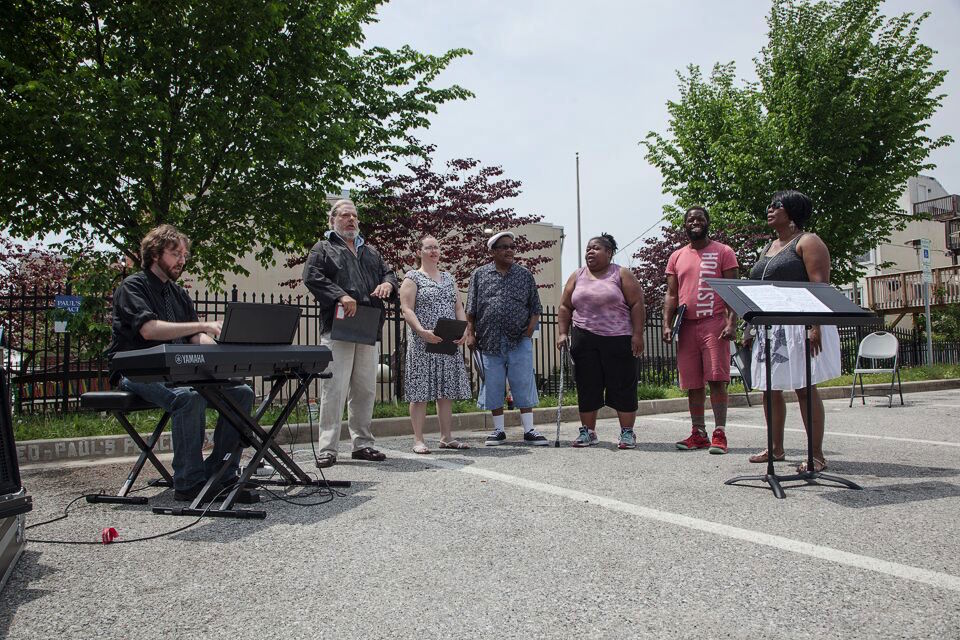 The mike is on. A young man all in red – Hollister shirt, sneakers and shorts – runs excitedly up to the mike: “Check? Check?”– then and steps back to join the others. During the next hour, his broad smile will never once leave his face.

It may not be the top choir in town, but it is one of our most important. Its mission: to welcome all individuals, particularly those experiencing homelessness and poverty to make music together and be a choir of hope. Paul’s Place is the nexus where they all meet. Serving the community for over 30 years, Paul’s Place offers far more than a hot meal and a shower. Its two dozen services include health screenings for the homeless and uninsured at their Nurse’s Clinic, academic mentoring, sports, field trips and access to computers.

Douglas Buchanan and his brother, Ben, founded this new ensemble, Voices Rise: A Baltimore Choir of Hope. The group varies in size from week to week, sometimes as large as 12 or 15, and rehearses every Tuesday at Paul’s Place during the lunch hour. “Brother Ben,” says a chorister they call Wolfman, “is our piano man.”

At his elbow, Jim, in the black shirt, gives a hearty laugh, “I always thought that was Franz Liszt.” (I’ll later learn that Jim is a Paul’s Place Ambassador with an extensive LP collection.) Buchanan credits Ben as his complimentary force – his pop-conscious better half.

The inspiration for Voices Rise is the Dallas Street Choir, founded by Jonathan Palant in 2014. Next stops for that choir include huge venues like Carnegie Hall and the National Cathedral. As for our own hometown choir, you’ll have your own chance to hear them on Sunday, May 28 at St. David’s Church, where Doug is the music director. You can also hear some of the members of Voices Rise in a segment of Aaron Henkin and Wendel Patrick’s Out of the Blocks podcast focusing on Ward Street later this season.

This choral project is a joint partnership between Paul’s Place, Peabody, and St. David’s Episcopal Church. A generous Dean’s Incentive Grant from the Peabody Conservatory came through in November and the choir was rehearsing by February. 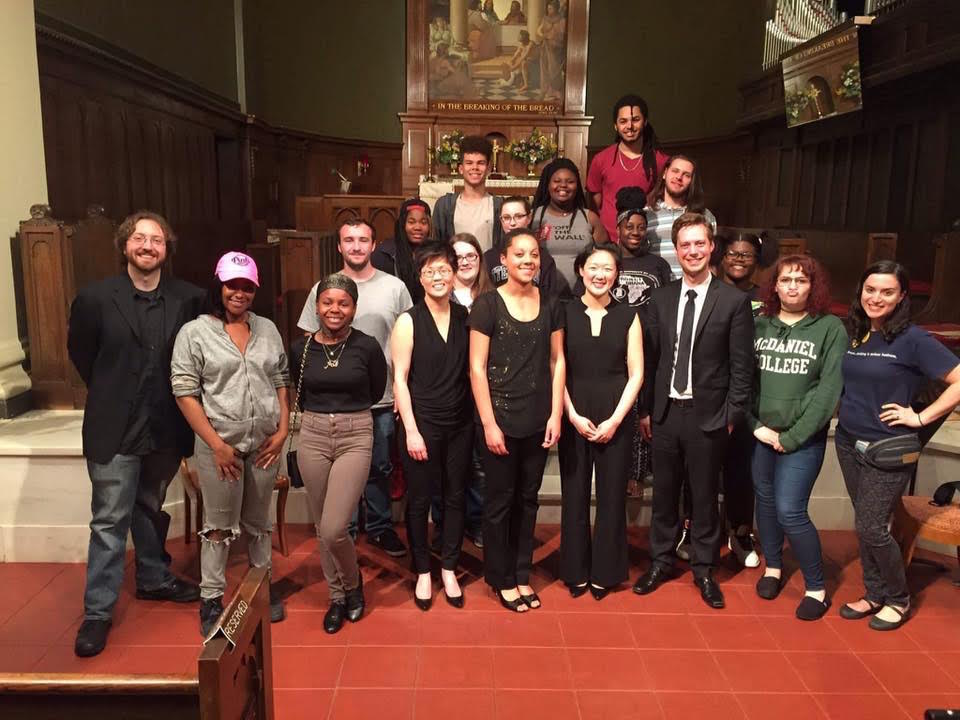 At first the main focus was vocal production and matching pitches. Now their voices are stronger and more confident as they each come into their own. “Now,” Buchanan said in an interview last week, “we’re doing arpeggios.” Chris, the young man in red, who beams as he sings, swaying to the music, gets excited anytime they’re learning a new piece. “Is this a melisma?” he’ll ask, seizing on one of his new favorite terms.

Another chorister, Lisa, tells me she’s been singing since she was six. On the day of their public debut, she admits to holding back her voice a bit. After starting in Voices Rise, she worked up the courage to ask to join the choir of Faith Tabernacle on Patapsco Avenue. She got the affirmative the day before her birthday – “the best present,” she said. She proves that when you come to Paul’s Place, you’re not just hungry for food, but you are hungry for community, for musical experience. It’s empowering.

Watching them that Saturday morning, you heard the sense of something profound and enriching. Linda had gone up to sing leaning on her cane, by the time she launches into “I Believe I Can Fly” she’s laid the cane on the ground and holds her song book in two hands, only occasionally glancing down.

In giving the gift of music, these choristers are spreading a gospel of love. They’re expanding their sense of self by singing in unison. It’s a magic process. Floyd, a beatboxer and freestyler puts it like this: “It’s like taking a 32-pack of crayons or pouches of Kool-Aid, when you mix it all together, you get something tasty.”

A church works on the same principle. A living church is not about the building, it’s about the people. There may be four walls, and they may be in Roland Park, but the congregation defines the community.

We’re in the middle of Doug’s “Year of Yes.” Twenty premieres of new works (some of them his own). One hundred and one pieces of choral repertoire performed at St. David’s alone–he also conducts the Maryland Choral Society, performs as a concert organist, and teaches at Peabody and at Dickinson College. It’s no wonder he’s spotted his first two white hairs. His projects are now flying, but the leap began the moment he took up his directorship in music at St. David’s Episcopal Church at 4700 Roland Park.

Three years ago, when he joined St. David’s staff, he took an inventory of works in the choral library. There were only two works by women and two pieces by African-American composers. In a city that is 75% African American, he wanted to shape the choral life of the congregation to better match the make-up of its whole community. This led to the founding of an annual Evensong dedicated to the life and legacy of the Rev. Dr. Martin Luther King Jr., which recently featured excerpts from Judah Adashi’s social justice cantata, Rise. 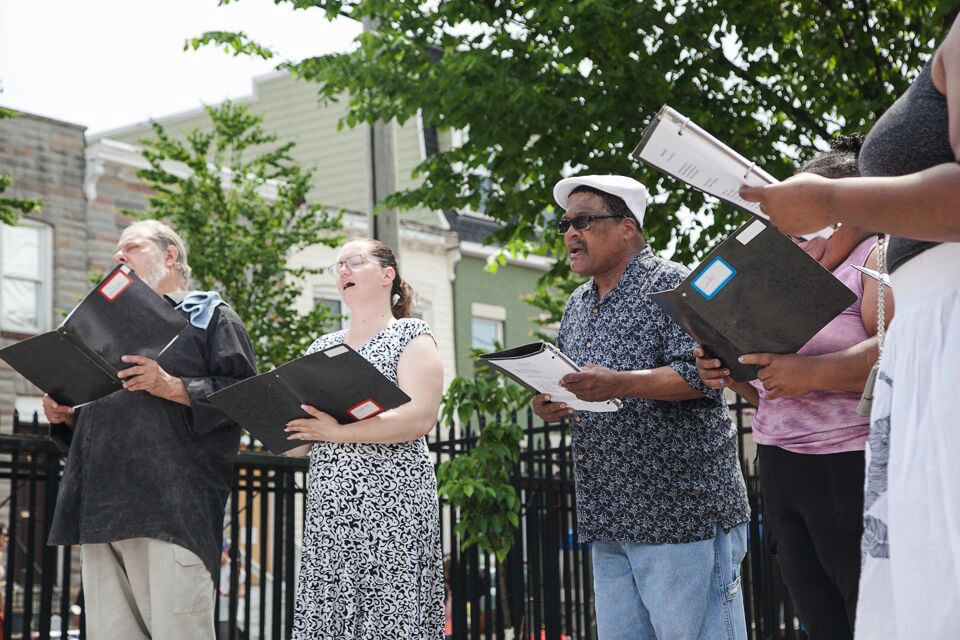 Before the Evensong for the Feast of Hildegard von Bingen this past September—an annual event dedicated to celebrating music by women—Buchanan featured Frances Pollock’s work for mezzo-soprano and chamber ensemble, God as she makes this earth.

The text, by Vanessa Moody, turns the god-as-usual concept on its head. Instead, she asks, what if our creator were a woman? Moody’s text offers a sort of sung-spoken apology and celebration. The energy of the work, though strongly muscled, calls to mind the delicacy of Persian painting: like a gorgeous tiger frozen in mid-leap, a bite that never bleeds. It’s the suppressed tension of a female before her flow. “Sorry I… excuse me, I’d like…” sings the female creator who could be of any stamp and any time. The themes of planting, clay, drowning, and gilding, end in “craving dust.” Claire Galloway Weber, mezzo-soprano, intoned the final phrase: “Perhaps I’ll never make again.”

For Buchanan, every music program should have a new piece, but he won’t abandon the rich wealth of the old rep. This season at St. David’s featured local Chair of the Peabody Composition Department, Michael Hersch. Hersch’s only choral work, From Ecclesiastes had never been performed – until Doug and the St. David’s choir tackled it, in partnership with the Bridge Ensemble. The chords evolve as they decay, creating a kind of vascular, epic music structure that points to something bigger, like tributaries feeding a mighty river.

Buchanan cites Hersch’s main piece of advice to young composers: “You, the composer, speak to your own experience of this exact time and no one else can do it.”

So St. David’s funds both a composer-in-residence and an ensemble-in-residence. Young voices change how the work of the church is done. This season’s composer is Michael Rickelton, a Millennial thirty-three years young; next season’s is Faye Chiao, an accomplished composer for voice, choir, and theatre. In 2016-2017, St. David’s featured the Argus Quartet as ensemble-in-residence. Without the intrepid searching of Buchanan at New Music on the Point, Baltimore would never have heard them. On their May 5 concert, Buchanan was pleased to announce that the Quartet had just placed first in the M-Prize Chamber Music Competition. (In fact, they’d rushed straight from the competition to Baltimore and caught a nap in the pews between rehearsal breaks.) Argus’ next residency will be at Julliard.

Buchanan offers a level of curation you don’t find most places, and, as I overheard one attendee point out, the parking is easier to find than venues downtown. And the audience is growing. 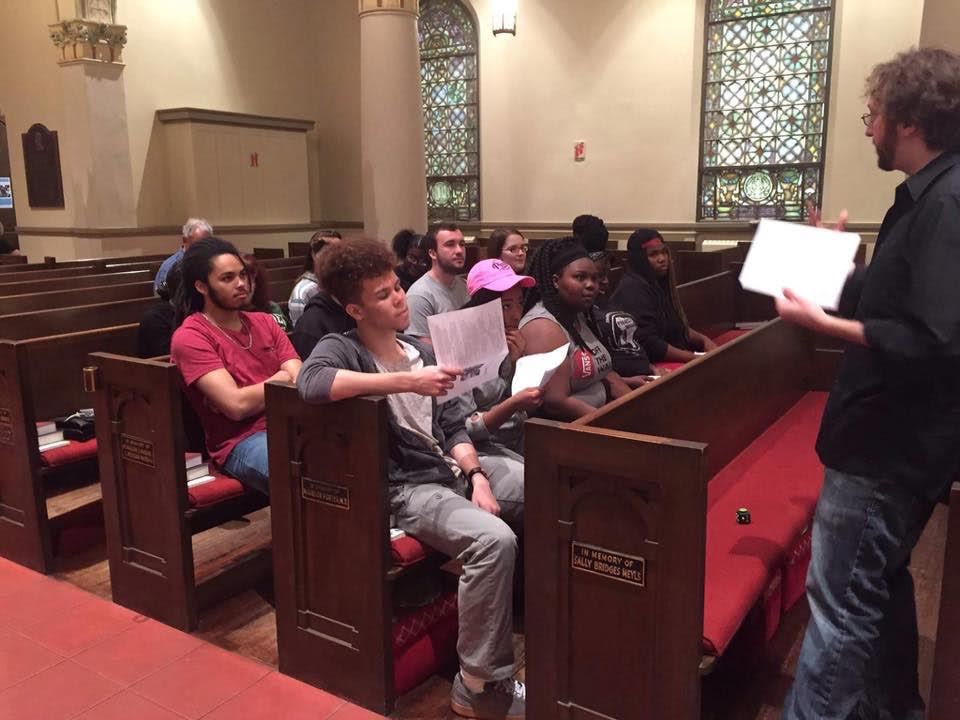 The fifteen high schoolers who came to St. David’s on May 5 to hear Argus were decidedly not from Gilman. These new music fans are from Benjamin Franklin High School at Masonville Cove. Their teacher, Jacqueline Bhandari, accompanied them. Some had never been to a live concert before. Others have come to St. David’s a few times. At least one cried after hearing a Trio Appassionata concert at St. David’s earlier in the year. Buchanan has visited their school too. They have a music club and an elective class, to make up for the fact there is no official music program.

He’s spoken to them about women composers, including Marianna Martines, who studied with Haydn and performed four-hand sonatas with Mozart. (Buchanan conducted the Mid-Atlantic premiere of Martines’ Dixit Dominus with the Maryland Choral Society this past March.) They enjoy Buchanan so much that they asked him to attend their graduation. Argus’ program would have been daunting for even a seasoned concertgoer: Czech composer Janacek, contemporary works by Ted Hearne and Andrew Norman, capped by a late Beethoven quarter, Op. 132.

Buchanan wants three things for his parishioners and anyone who chances into St. David’s sanctuary: to engender an artistic experience, to feel welcome to worship, and to experience rest and renewal. The beauty of his series is that it’s not a store front. Attendees don’t buy tickets. They simply come with open minds and hearts for a novel encounter with music and the divine. “If it’s not unpredictable,” said Buchanan, “then it’s a rock.” God may be a rock, but music is not. It’s an unfolding odyssey for the ear, a living expression on the lips, and a means to minister. 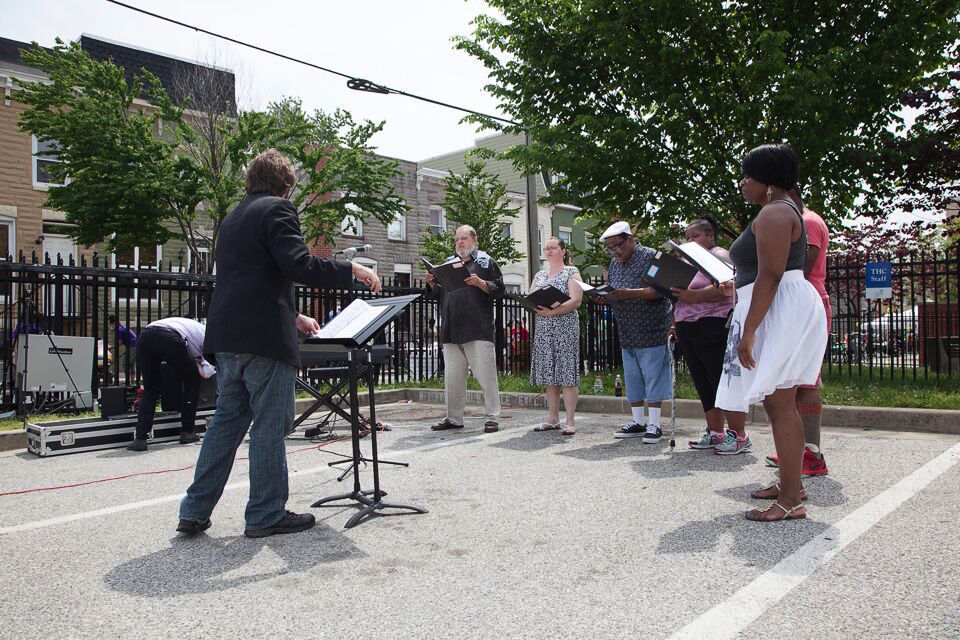