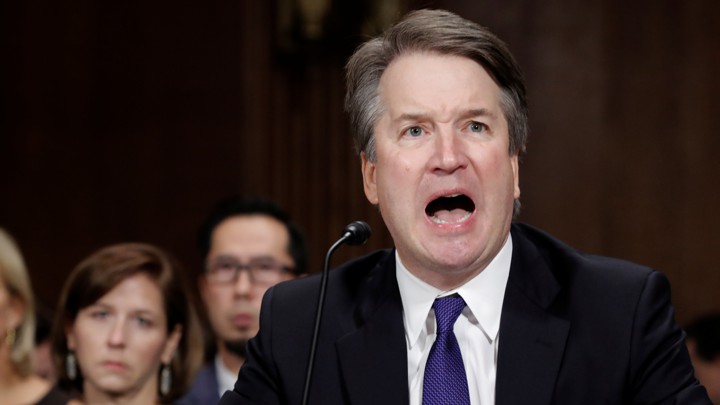 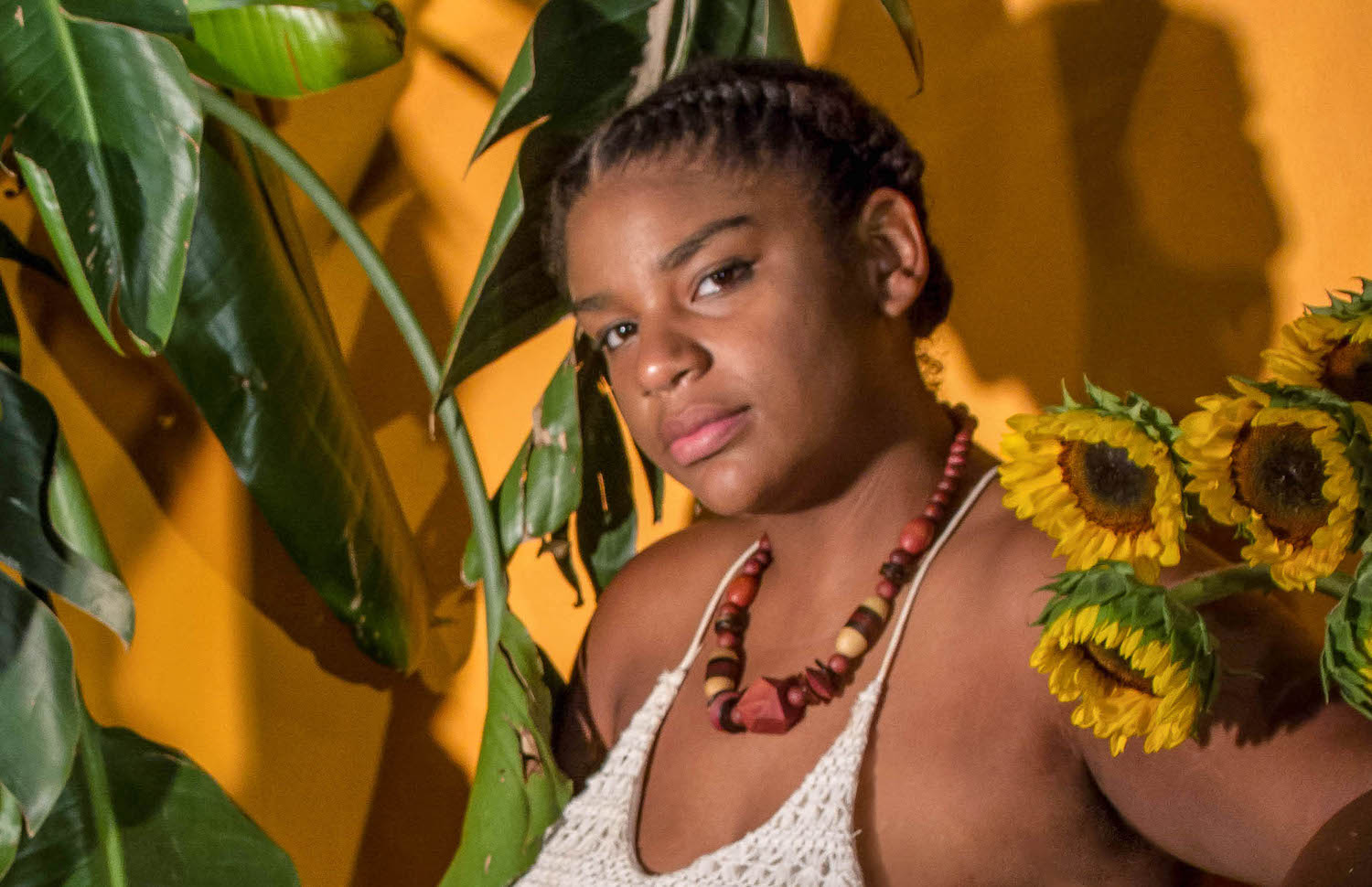 In Michel Foucault’s first volume of The History of Sexuality (1978), the French social anthropologist stated that “the rallying point for the counterattack against the deployment of sexuality ought not to be desire, but bodies and pleasures.” With this statement, Foucault momentarily turns normative sexuality on its head, posing that sexuality might not be tied so directly to clearly defined sexually differenced bodies (male and female), but bodies of all forms and differences manifesting and experiencing a diversity and depth of pleasures.

This radical turn away from sex and desire towards bodies and pleasures in Foucault’s work has provided an important model for many feminist and queer theorists invested in detaching sexuality from heterosexual norms of what desire looks like and deregulating the structures that have historically mandated how, who, and what one desires. The result of this powerful expansion of the definitions of desire and bodily experience is profound and continues to ground the discourse of queerness as a broad terrain of bodily identities, sexualities, and desires in order to overturn the historically limited set of homogenous operations that have siloed Western notions of sexuality since the Enlightenment.

Queer(ing) Pleasure, an exhibition curated by Andy Johnson for the District of Columbia Arts Center’s Curatorial Initiative, pulls deeply from Foucault’s inclusive and dynamic troubling of pleasure and desire as well as more recent radical queer discourse such as that of Audre Lorde, to speak to the current constellation of debates and politics that structure contemporary gender and sexuality studies. This presentation includes the work of five artists working across a range of object-oriented and time-based media—Antonius Bui, Monique Muse Dodd, Tsedaye Makonnen, John Paradiso, and Jade Yumang—all of whom cite expanded notions of “pleasure” as an important thematic texture within their work.

However, as Foucault suggests, pleasure and desire appear and intersect with bodies of all kinds in elusive and dynamic ways, begging the question of whether it is possible to “seize” these protean qualities through representational means. If so, what does pleasure look like if it emanates differently across a diversity of bodies and identities? How might pleasure and desire escape its own stabilization and keep in play the very conditions that render pleasure, desire, and identity so powerful? 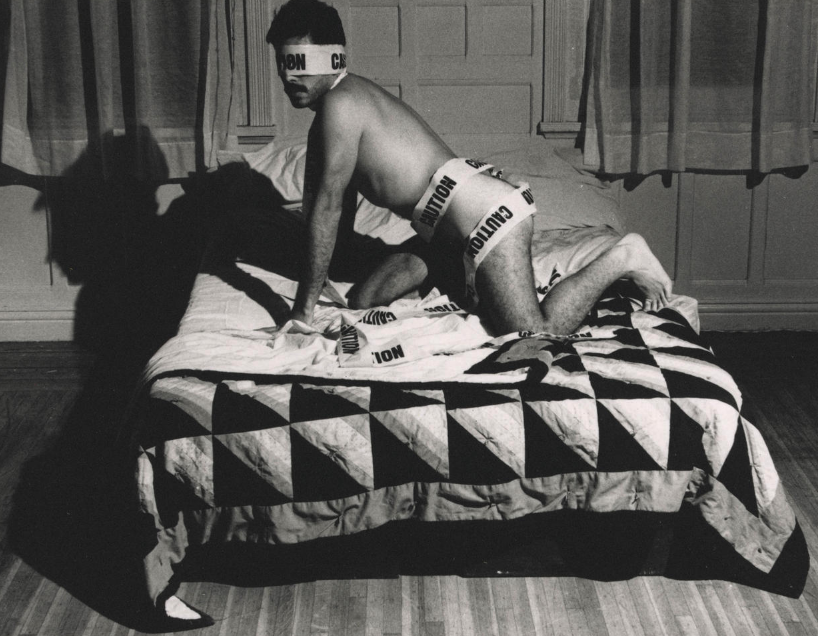 One answer lies in Johnson’s curatorial narrative, where the unfolding of works through time allows for different visual and personal articulations of queerness to reverberate on and against one another across the open oval of the gallery space. One of the most powerful of these dialogues occurs between the three works by multimedia artist John Paradiso: the silver gelatin print Seductive from 1991 and his more recent embroidery hoop works including A Pair of Bottoms (2014) and Bear Fruit (2015) displayed on the opposite side of the space. The separation visibly denotes the lapse of time between these two bodies of work, a reminder of the different political frameworks and social circumstances that have shifted the terms of queerness in the last thirty years.

Coded in the documentary language of black-and-white photography, Seduction refers to the state-sponsored disavowal of the American AIDS epidemic during the 1980’s and 90’s and the complicated relations between the threat and fear that marked queer communities during this era and the recent fight for gay liberation and sexual freedom waged in the years prior. Grounded on all fours atop a simple quilted bed, the lone male figure (the artist himself) poses in this private space for the camera in three-quarter profile, his naked body suggestively arranged in a pose reminiscent of the erotically-staged postures found in pornographic films and videos. 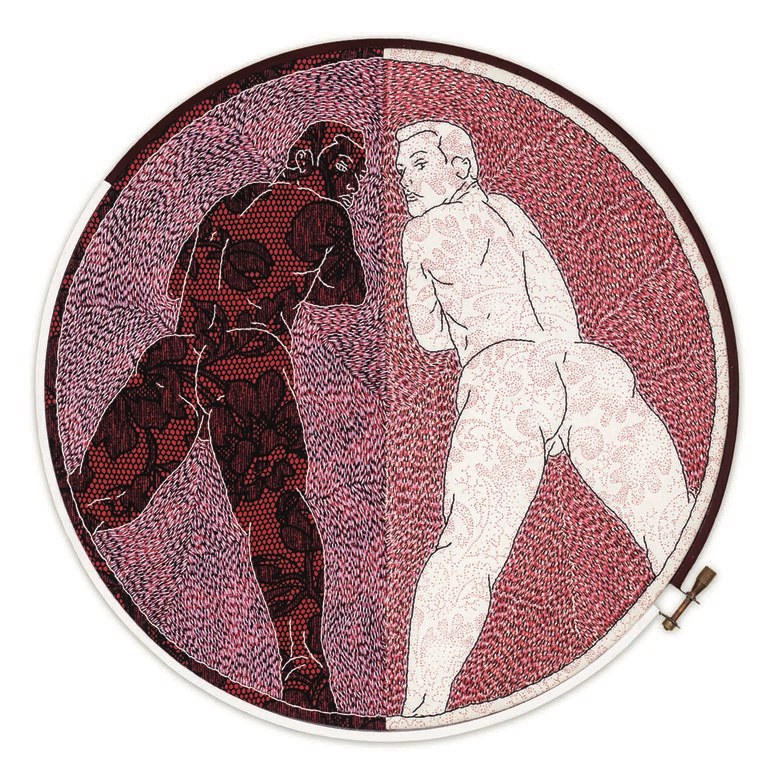 Any delight in the figure’s confident posture is interrupted by the neon CAUTION tape that covers his eyes and lower body—a formal barrier that Paradiso constructs between the viewer and himself (the presumed object of their aesthetic and sexual pleasure) as a reminder of AIDS’ rupture to the bodies, lives, and thus, temporalities of queer persons.

Paradiso’s recent work on embroidery hoops attends to the profound capacities of craft to engage notions of the body and time through handiwork and traditionally “feminine” practices but are also sites where needles stab and puncture the surface of the work, where beauty and pain entangle themselves in each stitch, inviting a notion of queerness Jack Halberstam has stated is “where queerness often goes to live.” 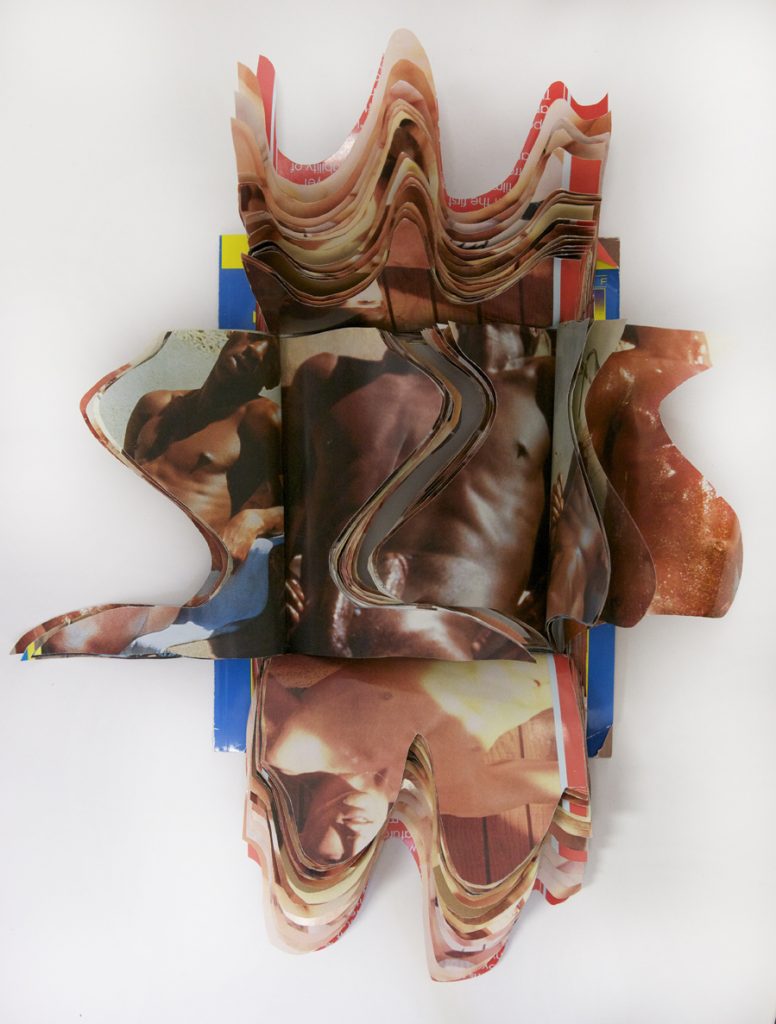 Paradiso’s investment in handiwork and queer culture in New York speaks back to artist Jade Yumang’s appropriation of gay print culture, specifically vintage gay magazines from the 1980’s and 90’s sourced by the artist in specialty bookstores in New York City. A work from Yumang’s Ooze series is one of the strongest works in the exhibition—a meticulously layered dissection of a pornographic magazine filleted with a sharp implement with the precision of a surgeon, the artist literally opening up the “body of the text” to reveal the subterranean forms that never settle between suggestions of bodies and pure abstraction.

Yumang’s sculptural wall hangings culled from his Thumb Through series continue the artist’s repurposing of print material, namely, issues of My-O-My, a gay erotic magazine published in the 1960’s and 70’s made famous by a New Jersey lawsuit after copies of the magazine was seized by law enforcement officers without a warrant from a bookstore in 1974. Yumang scans and prints the friendly and nostalgic pornographic vocabularies of male homosexual culture onto fabric, shaping the material into repeated forms suggestive of tube socks, phalluses, quills, candles, and indigenous tribal garb into decorative associations on the wall alongside fragments of varsity bomber jackets, smooth leather, and silky fringe.

Begging us to enjoy the tactile differences between different fabrics and the ways in which these forms and surfaces stand in for bodies, Yumang inscribes bodily pleasure and sexuality as a constellation of inticing and illicit sensory experiences—whether in print or as texture. Again, queerness and pleasure is articulated as an opposing condition where threat and beauty, desire and danger appear all at once. 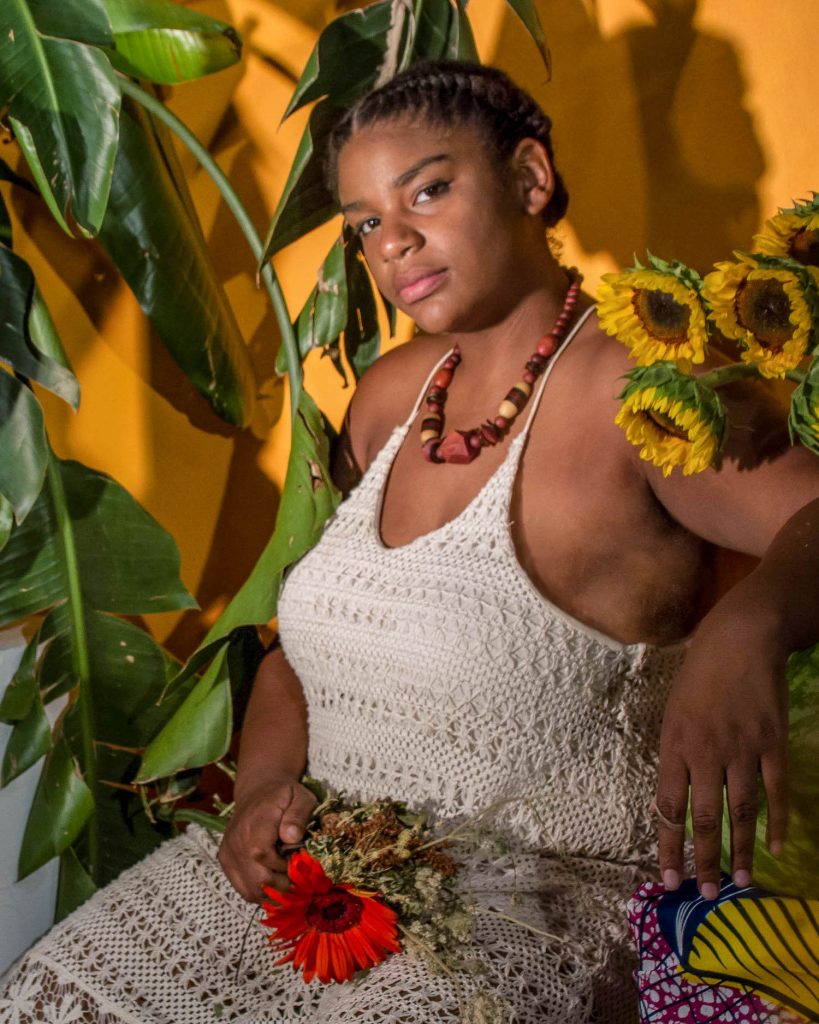 However, the explosive and dynamic condition of queerness and bodily pleasure is articulated the most magnanimously in the examples of queer women of color represented in the show. Monique “Muse” Dodd’s luminous photographs of take on the quieter (but no less radical) conditions of self-care, healing, and spirituality to construct an image of queerness that is open and inclusive, yet attentive to the specific needs and histories of black persons within white heteronormative patriarchal culture.

In a photographic portrait from the series La Negra de Nadie (2017), which roughly translates to “the black woman who belongs to no one,” Dodd revels in the capacity for portraiture to reveal the unique subjectivity and presence of the sitter as autonomous, resplendent, engaged, and in control. Caught in the warm light of an interior space filled with colorful flowers and luscious plant life, the sitter’s assured gaze and confident yet relaxed posture wades deep into the visual codes that bestow beauty and agency to women in representation, but provides a a vital reminder of the ways in which women and particularly queer women of color have not been granted control over their own lives, bodies, and sexuality across the scope of Western history, nor have they been afforded control of the ways in which they have been represented in Western image culture.

In Dodd’s work, the condition of queerness and pleasure is always-already bound up with the ways identity and privilege function together to shape our relations to ourselves and others—an acknowledgement of the work that still needs to be done to open inclusive notions of queerness and sexuality where pleasure can be claimed and felt in as many forms and intensities as Foucault promised.

Author Bio: Dr. Jordan Amirkhani’s research and writing reflect her commitment to intersectional feminist critique and the contextualization of issues of gender, class, and race within the development of European and American art from the nineteenth century to the present. She is a regular contributor to Daily Serving, Artforum, and Burnaway, and serves as a Professorial Lecturer in Art History at American University in Washington, DC.