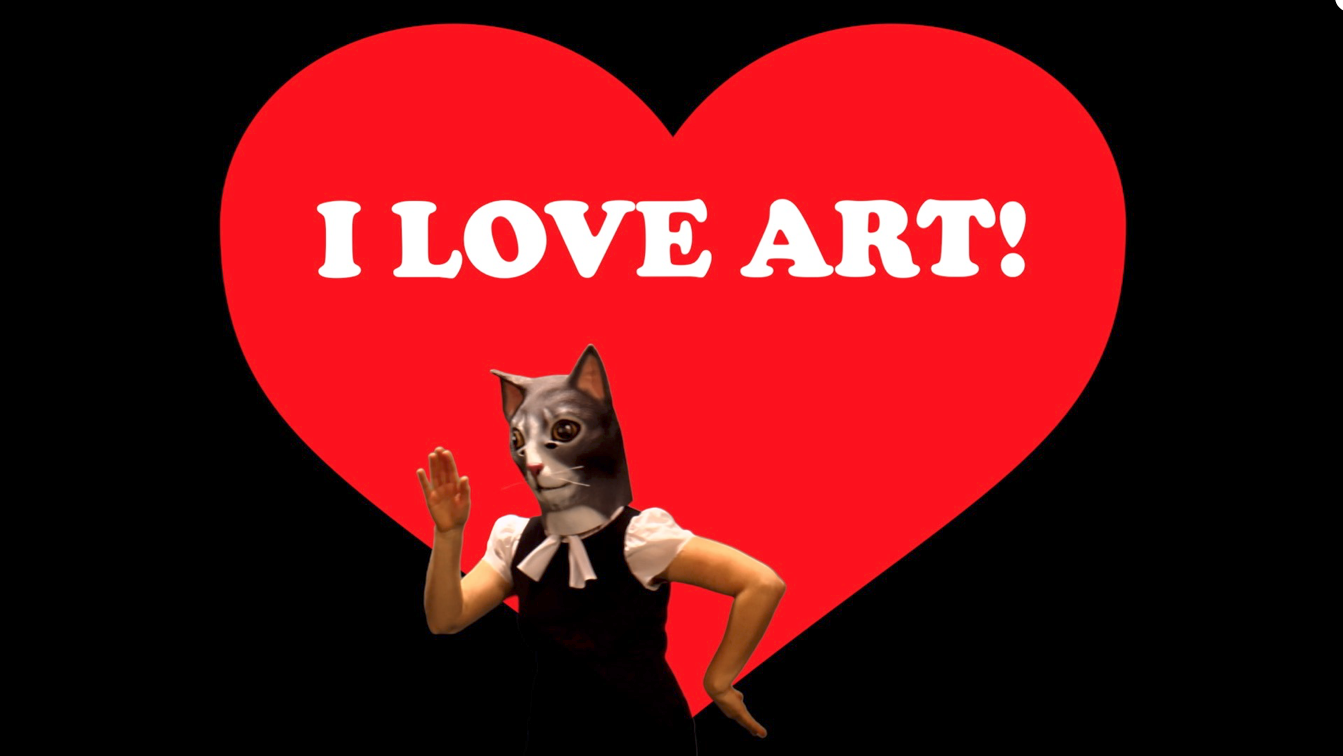 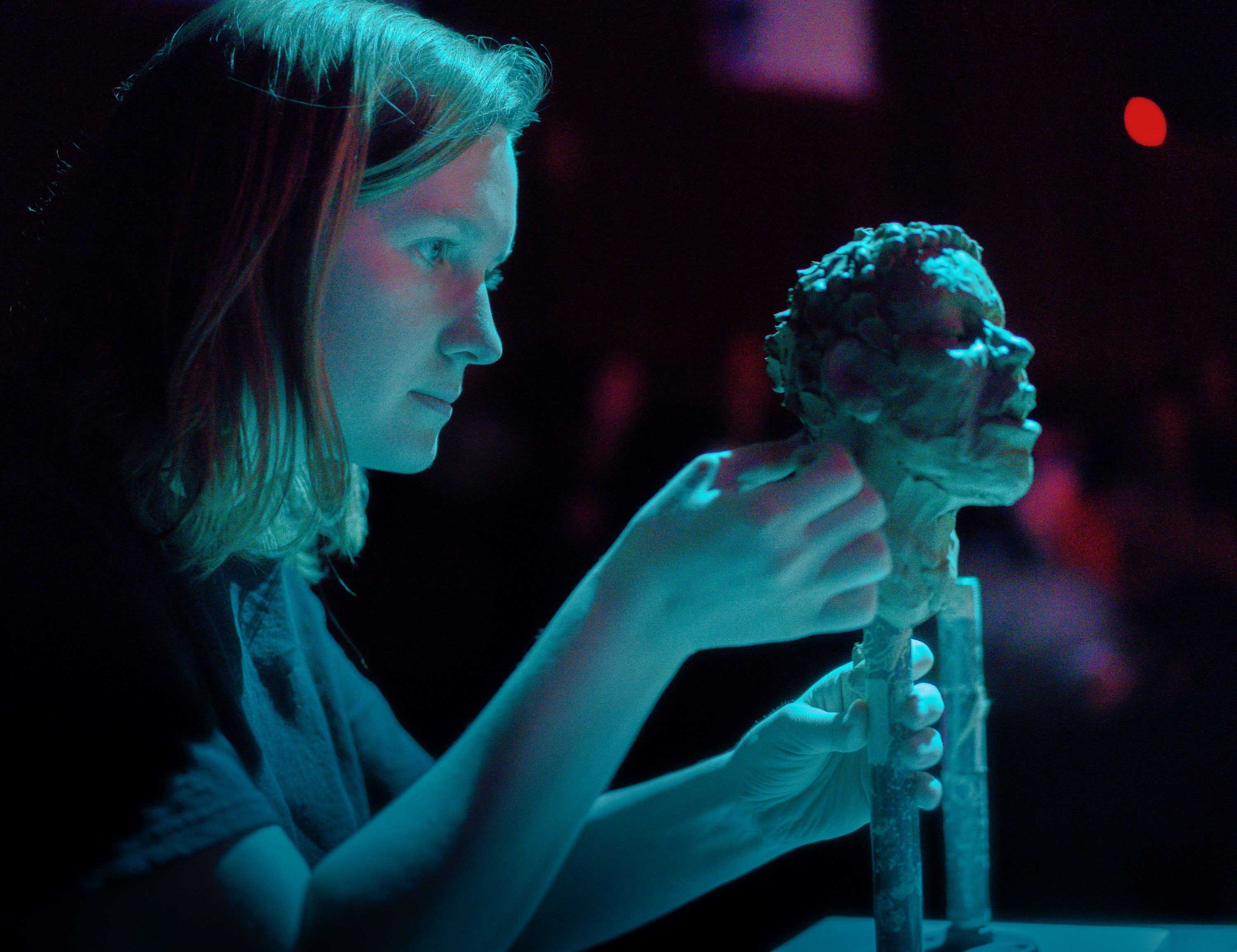 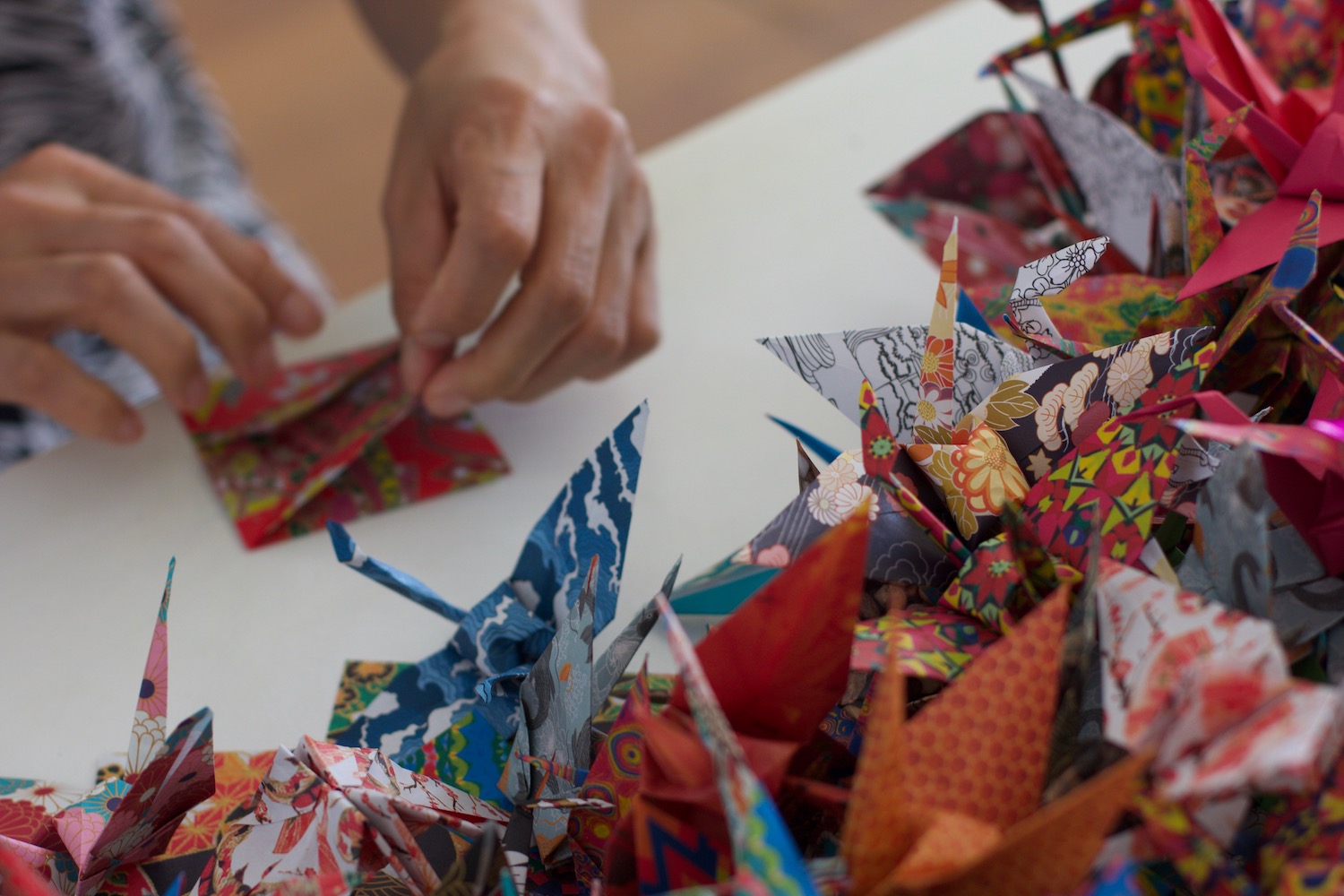 Bonnie Jones is teaching me how to fold a paper crane. Starting with a square, I connect the corners, fold once, fold again, copying each careful crease. I watch it shape-shift from cootie catcher to stingray to kite until, finally, wings appear, and my magenta paper crane pops its magenta paper head out.

Jones is patient with me. This is my first fold after all, and she’s made over a thousand. There’s a Japanese folktale that says if you fold a thousand paper cranes you get a wish. “The aim is 1,500, maybe I have like 1,100,” she says. Most of those are hanging in the window of Cardinal Space, where Jones’s first solo gallery show, 1,500 Red-Crowned Cranes, runs through June 15. The title is a reference to the endangered birds that winter in the demilitarized zone (DMZ) between North and South Korea, a 160-mile-long no man’s land which has become a de facto wildlife preserve. The area was established in 1953 as part of the Korean Armistice Agreement to end the Korean War, and it serves as a buffer between the two countries.

“There was something about that space that spoke to me from the perspective of thinking about Korean identities or Asian-American identities, hyphenated identities, in between one thing and another thing,” Jones says. She was born in Korea but adopted by her American family at three months old and then grew up in New Jersey. Her history informs much of her work, not only in its subject matter but also in its multilayered approach. She is interested in what lies in the cracks and spaces unseen, what goes on in the folds and creases, and her work explores the loss, power, and possibilities inherent in those places.

There are an estimated 2,800 red-crowned cranes left in the world. Their populations have dwindled primarily due to wetland habitat loss. One thousand of the 2,800 reside in Japan and the rest are migratory. Jones says 1,500 was a number she found when doing initial research for We’ve, a collection of eight prose poems that doubles as the exhibition text. In an email, she writes, “Hard to say with exactness about how many of these migratory cranes are left. So it might just have to be a somewhat factless fact.”

The inexactness of the 1,500 is a consequence of the DMZ’s impenetrability, since scientists are not allowed in the area to study wildlife, but it mirrors the losses that accompany immigration and cross-cultural adoption, when cultural knowledge can become blurred and piece-meal. “Coming from another place, there’s never going to be not a sense of loss,” Jones says. 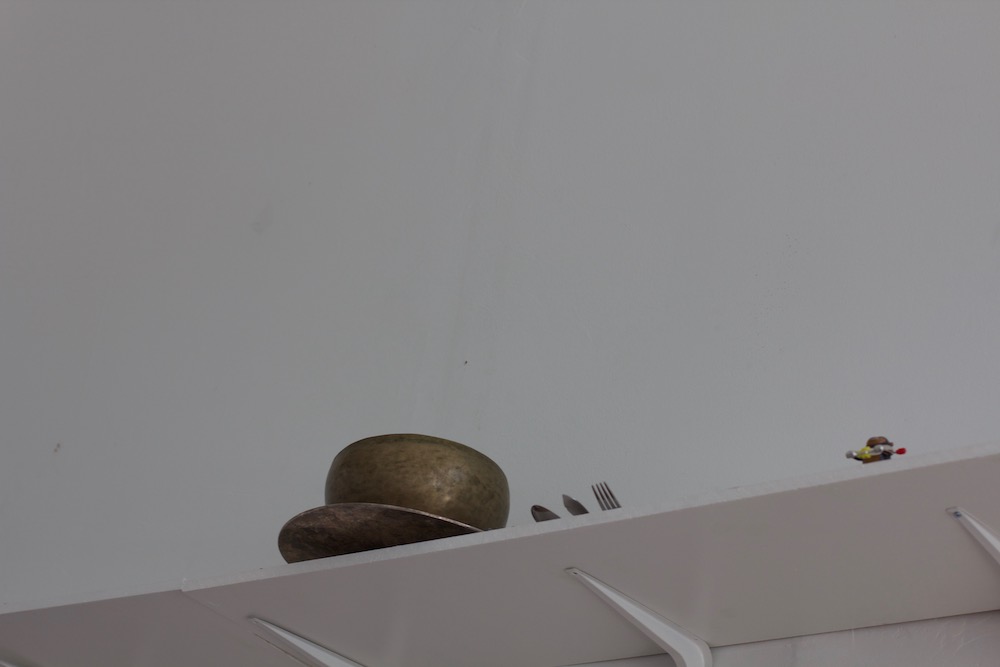 Walking into Cardinal Space, what is not visible is just as noteworthy as what is. Four white tables line the perimeter. Each one has been cut in half and juts out from the wall, as though it had been sawed down the middle like a magician’s assistant. Eight feet above, various objects decorate a shelf, teasing the viewer: a plastic bag, a box of sandals, a collection of bowls, an old cookbook. These items hint at a history, but they toe the line between sentimentality and ephemera, as if they couldn’t decide whether to spark joy, or just collect dust.

Jones says the decision to split the tables in two came from the Joint Security Area, the only portion of the DMZ where individuals are allowed. It’s now a tourist attraction, but the JSA was originally created to serve as a neutral meeting space, and political negotiations occurred at tables demarcated with a line separating north and south.

“Every part of the show is about encountering a boundary, whether that be a visual one, a sonic or physical one,” Jones says. She is interested in political boundaries—who has the power to set boundaries, and the American propensity to ignore them—as well as personal and psychic boundaries, and “who thinks that they should have access to your body, who thinks that they should have access to your emotional reality or your cultural reality,” she says. “There are things about the way that this body is, as a Korean, that even the most learned non-Korean person actually will not be able to ever access.”

A simple diagram instructs me to bend over one of these half-tables. An mp3 player is stationed underneath, just out of sight. Ear to surface, I listen to a recording of Jones reciting “Euljiro 3ga,” one of the poems from We’ve. In this folded position I’m reminded of being a child, bored in class and listening to the hidden sounds of my desk. Jones says the idea is to “simulate this sensation of communicating with your body,” calling to mind the red-crowned crane’s elaborate dance-like communications. 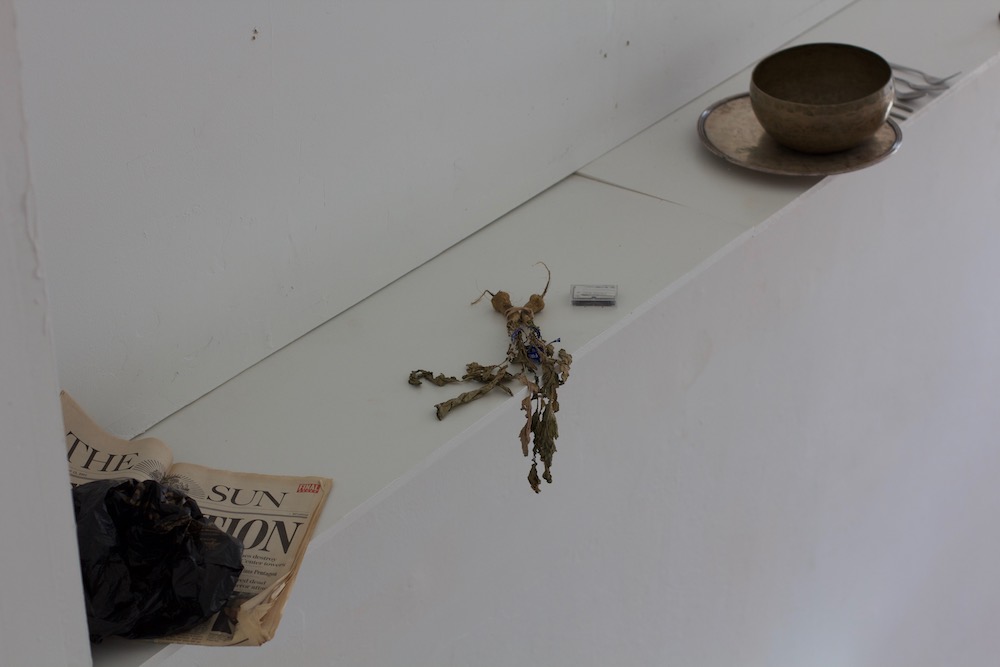 The objects lining the shelf inspire a similar contortion. In order to look at them, I have to stretch myself to see. Or I can take the stairs in the back, and walk to the second story overlooking the gallery space. There, I’m provided with a bird’s-eye view and a clearer perspective. I can see an old copy of the Baltimore Sun that wasn’t visible from below, but I still can’t read the text. In the back room, I can barely see anything. The space is nearly pitch black save for a strip of low light lining the bottom edge, and a sound installation plays electronic compositions and pink noise sampled from Lake Montebello. It hums somewhere in between TV static and a rushing river and, every so often, pulsating electronic tones volley back and forth like a tennis ball. The light at the bottom edge of the space is likely there for safety’s sake, but I found it somewhat detracting. I would have preferred to be plunged into the darkness and noise.

Jones’s background is as a noise musician, and pink noise, in particular, has caught her attention. It’s similar to white noise, but its power is inversely proportional to its frequency, making it more pleasant to the human ear. It also commonly appears in nature, says Jones. “It appears in human systems, it appears in music, it appears in animals and plants and water and waterfalls and origami and all of these ways that nature has of developing patterns.”

Her musical interest in layers and patterns translates to this multimedia exhibit even though her previous work has been more performance-based. Since moving to Baltimore about 20 years ago, Jones has been involved with the city’s art scene. She co-founded the Transmodern Festival with Catherine Pancake and Jackie Milad in 2003, and founded, organized, and co-curated CHELA gallery with Milad until 2004, when she received a Fulbright grant to teach English in Korea. “That was the first time going back to Korea as an adult. It was a really, pretty profound experience though I don’t know that I knew that until somewhat later,” she says. 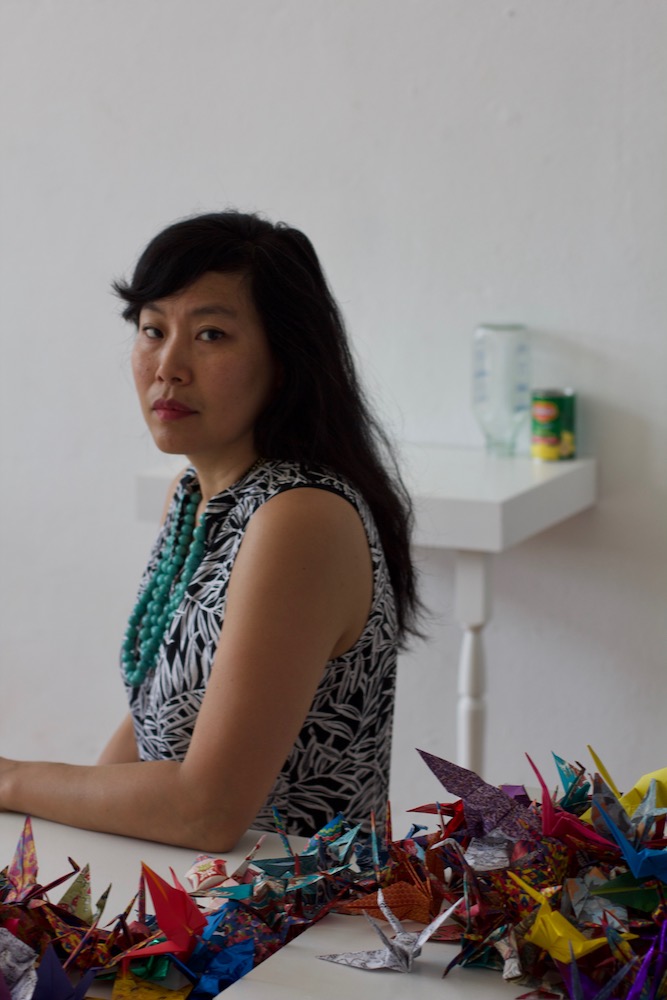 The title of We’ve is based on the name of a luxury high-rise apartment building Jones saw while living in Seoul. “There was always this question of the apostrophe, which I was always sort of obsessed with,” she says. “They could have just called it ‘we have.’” The contraction, she intuited, was a class marker, since “only a certain level of English language proficiency would allow you to [use] those kinds of contracted words.”

We’ve is also a reference to cultural differences between Korea and the United States. She recalls a memory of standing in a supermarket in Seoul, when an older woman came up to her and, without saying anything, rebuttoned her cardigan, which Jones had mistakenly misaligned. “That was one of the most tender things that a stranger has ever done which, you know, might have been a little intrusive for another person,” she says. For her, though, it inspired thoughts about “what it would be like if I had grown up in a place where I felt, instead of this very prominent American individualism and autonomy and everybody’s on their own, if you grew up in a society or culture where they had a ‘we.’”

That question—what if—hangs unanswered, but Jones is just as interested in exploring what it means to be an American as she is in exploring her Korean identity. The geographic boundary between North and South Korea is a distillation of those what-if questions. “I was thinking about using the idea of the DMZ as this cut between these two countries but also as this sort of symbolic hyphen,” she says. As a Korean-American, Jones exists in the hyphen, but she points out the intrinsic Americanness of that experience: “We all usually come from other places.”

The hyphen is a connector, but it is also a tensioned line, pulling in opposite directions. 1,500 Red-Crowned Cranes plays with that tension, whether that be in storied objects, prose poems, pink noise, or a paper fold.

You can fold cranes with Bonnie Jones during artist hours this Saturday from 12 to 4 p.m. Cardinal Space is also open Wednesday from 5:30 to 8:30 p.m., or you can set an appointment by emailing cardinalspace@gmail.com. 1,500 Red-Crowned Cranes is on display through June 15.

Nora Belblidia is a Maryland native and, growing up, came to Baltimore frequently for its art and music scene. After living in Montreal and New Orleans for a few years, she finally moved to Baltimore in 2016, where she has since worked as a psilocybin research coordinator and freelance writer. She is currently pursuing her master’s degree in writing at Johns Hopkins University.
Share