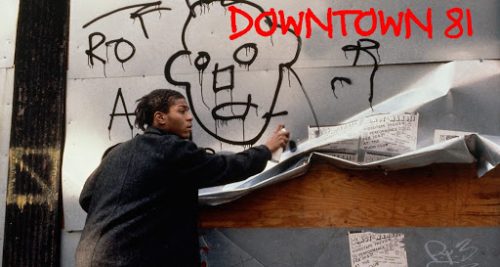 Back to the Future: Downtown 81 and Cunningham 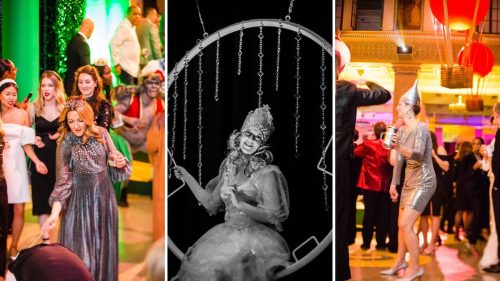 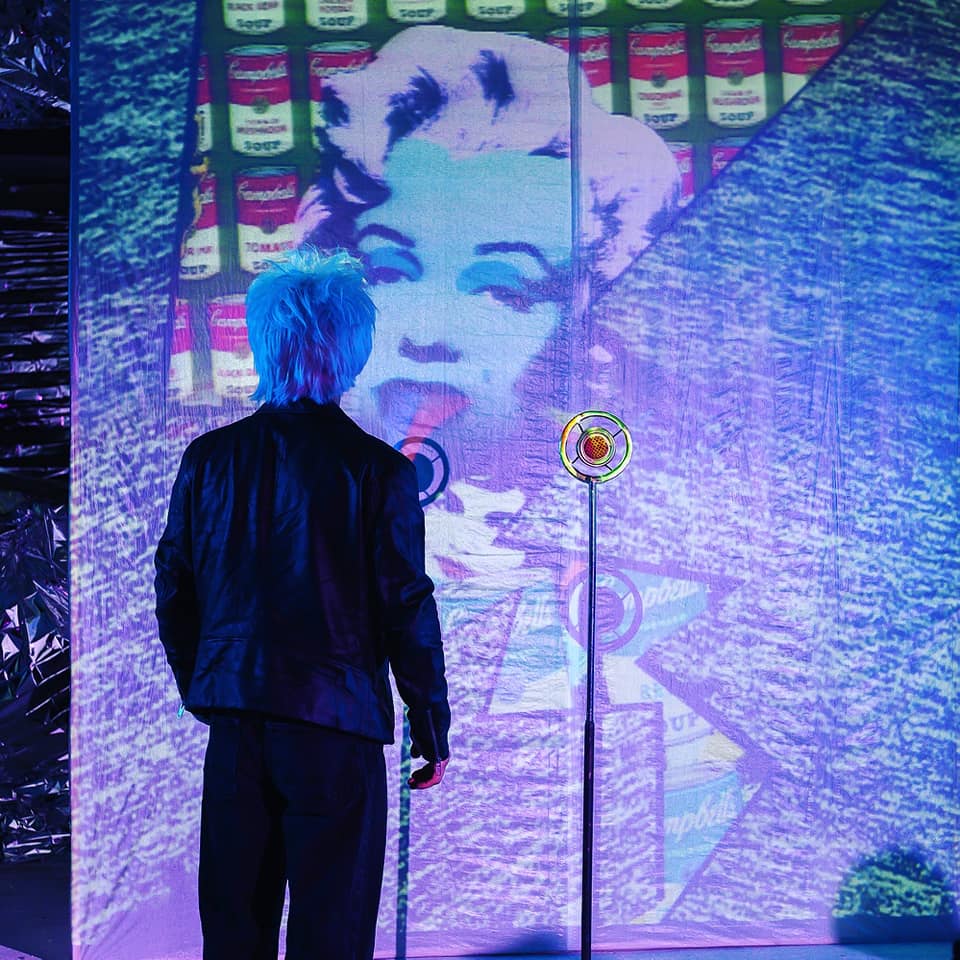 Andy Warhol likes to watch. Played by Nick Fruit, he sits in the single-chair front row of StillPointe Theater’s new venue in the Station North Arts District, training his prop film camera at six of the late 1960s denizens who flitted through his Factory creative headquarters slash warehouse chic lair in Manhattan’s Union Square. There’s poor little rich girl Edie Sedgwick (Sarah Burton), scion of families that date back to the colonizations of New England and New Amsterdam. Poet, photographer, actor, and devilish imp Gerard Malanga (Ricardo Sean Blagrove) and speedy actor Ondine (Seth Julius Fallon) cavort about in a cheeky haze of pansexual desires. Actress, writer, and artist Viva (Amber Wood) is completely over their tiresome dudeness. And the glamorous Candy Darling (Alicia Horton) is, well, glamorous. Oh, there’s also feminist writer Valerie Solanas (Christine Demuth), author of the SCUM Manifesto and the play Up Your Ass, which she’s hoping Warhol—excuse me, Andy, will produce. When he doesn’t, she does what many writers have momentarily thought about doing when receiving their first or one-hundred-and-first rejection: she shoots him.

Pop: Who Shot Andy Warhol?, the 2009 musical with book/lyrics by Maggie-Kate Coleman and music by Anna K. Jacobs, is ahistorical, apolitical, amodern, and absolutely entertaining. The roughly 80-minute musical treats Solanas’ 1968 shooting of Warhol at the Factory as a moment to invent an Agatha Christie-ish whodunnit, where any one of the above superstars may have had a motive to commit murder in a moment of passion. (Solanas actually turned herself into the police and confessed to the shooting.) It’s a story of pure imagination, and any fan of Warhol’s freewheeling ’60s, art oeuvre, writings, and interviews will recognize all the allusions that Pop! makes to that era’s ostensibly insouciant decadence.

In the process, it makes Warhol into something that in some ways he wanted but would probably loathe: mass-market common. StillPointe’s current production, directed by artistic director Ryan Haase (who also did the silvery foil-lush set decoration) with musical direction by Stacey Antoine, continues the company’s gift for investing slightly askew contemporary musicals with its lively take on mainstream sensibility. Over its ten-year history StillPointe has developed a knack for taking kinda/sorta mainstream Broadway and off-Broadway fare and realizing them on independent/DIY budgets in ways that makes such mass-audience entertainment compelling to snobs—maybe speaking only for myself here—while preserving, if not amplifying, the grand emotions that make popular musicals, uh, popular.

That’s consistently a difficult balancing act to pull off, and with Pop, the company’s strengths add interesting wrinkles to the musical’s Warholian meta-shout outs. This Warhol is less a pure surface 20th-century art icon and more a 21st-century creative—pardon me, just threw up in my mouth a little bit for using that word—who vampires whatever he needs from people in the service of his brand. Nick Fruit gamely captures how we’ve portrayed Warhol’s all-in sincerity over the years: the sleepy vocal inflection, the interpersonal passivity as virtue, and the weaponized casual indifference. Fruit is also way more conventionally handsome than Warhol ever was, which introduces a layer of physical attraction to an artist whose seductive allure was rooted in fame’s shallow veneer.

Not trying to graft any Facemash hot-or-notness onto this production, merely tap into something that writers/critics have been talking about for the past 20 years: that Warhol’s unscripted, real-time films (nearly 150 made between 1963-1977), local-access and cable television shows (Andy Warhol’s TV, Fashion, Andy Warhol’s Fifteen Minutes), and devotion to the photographic portrait and self-portrait anticipated reality TV, YouTube, and selfie culture. StillPointe’s adventurous sincerity is sharp enough to recognize the musical’s self-awareness, the lines cribbed from Warhol’s diaries and interviews, the scenes inspired by his films, the generational divide between him and abstract expressionists, and the production slyly spotlights the story’s 21st-century pop-culture trashiness. This Pop is what might happen if Bravo decided to put a bunch of under-resourced and aspiring young people who came to the Big Apple to chase their ambitions in a DUMBO warehouse for the reality series Real Artists of New York.

The result yields some genuinely inspired moments. Fruit’s Warhol asks Wood’s Viva to have sex with Ondine and Gerard while he films, and encourages the Sorbonne-educated actress to improvise some educated dialog about art and life during the scene. It’s a knowing wink at some of Viva’s work in early Warhol films and an infamous 1968 New York magazine profile by Barbara Goldstein. Here it plays out as the awkward, ridiculous, and dubious ask that it is, and devolves into Ondine and Gerard being more enthusiastically interested in each other, and Wood does a fabulous job of pairing an oh-so-bored-with-it-all ennui with her showstopper voice.

More belly-laugh sassy is an imagined meeting between Warhol and a trio of abstract expressionists, including Jackson Pollock. The painters are played by Burton, Demuth, and Wood, who have a blast overplaying their ostensible manly man masculinity. And Blagrove may be having more fun than any person has had on a local stage in recent memory as Gerard Malanga, which kinda makes total sense. Malanga’s not only one of the few superstars still with us, he’s the guy who got to dance with a whip during the Exploding Plastic Inevitable tour, and when the Velvet Underground would play “Venus in Furs,” he’d kneel onstage and kiss Mary Woronov’s black leather boots. I’d put that on my résumé.

What keeps Pop from wallowing too deep in the cartoonish is the space the production gives for undercutting the caricatures these 1960s figures frequently become in popular imagination. Burton and Demuth bring touches of pathos to their roles as Sedgwick and Solanas, respectively, reminding us that the poor little rich girl and the radical feminist were also young people passing through a subculture that seemingly celebrated nontraditional gender roles and sexuality that still often sexualized women and their bodies as cavalierly as Western art always has.

And in Alicia Horton, Pop has a flesh-and-blood human being playing a legitimate icon too often reduced to campy, if well-intentioned, drag. I can’t competently speak to what a performer like Darling means to the contemporary trans community and experience; all I can go by is what she’s still saying to us in her films and in how others captured her, such as Peter Hujar’s ineffable 1974 photograph, “Candy Darling on Her Death Bed.” Here’s an artist who understands how people want to see her, and the mountain of emotional labor she’s having to do for people who may see themselves in her for years to come. On opening night director Hasse told me that Candy Darling is typically played by a cisgender man, and musically the role is written for a voice in a different register than a trans performer might have. Not only does this Pop cast a trans actor in the role of this icon, Horton recognizes that Darling is both the musical’s impromptu emcee but its moral anchor, and she balances the levity of the script and the gravity of the demanding role with a majestic grace.

A few minor opening night quibbles: a microphone or two sounded like it crapped out for a few songs, and the pit for this production is located behind a low wall, so at times I wanted a better vocals/music balance and maybe a little more volume. But keep in mind I’m also an old who’s been going to basement/warehouse/rock club shows for nearly 40 years and believes everything needs to be louder. All that said, StillPointe’s new theater feels ideally suited for the company, which has always labored under making whatever space it’s in work for it. So it’s exciting to think about just what it may be able to pull off in a flexible black-box theater that they can experiment with over time.