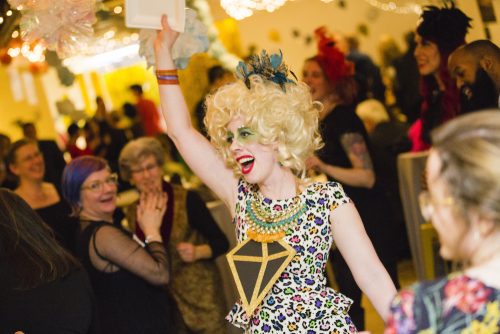 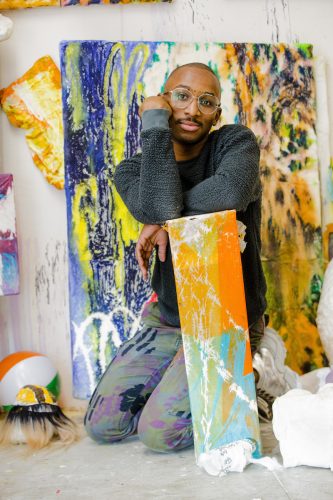 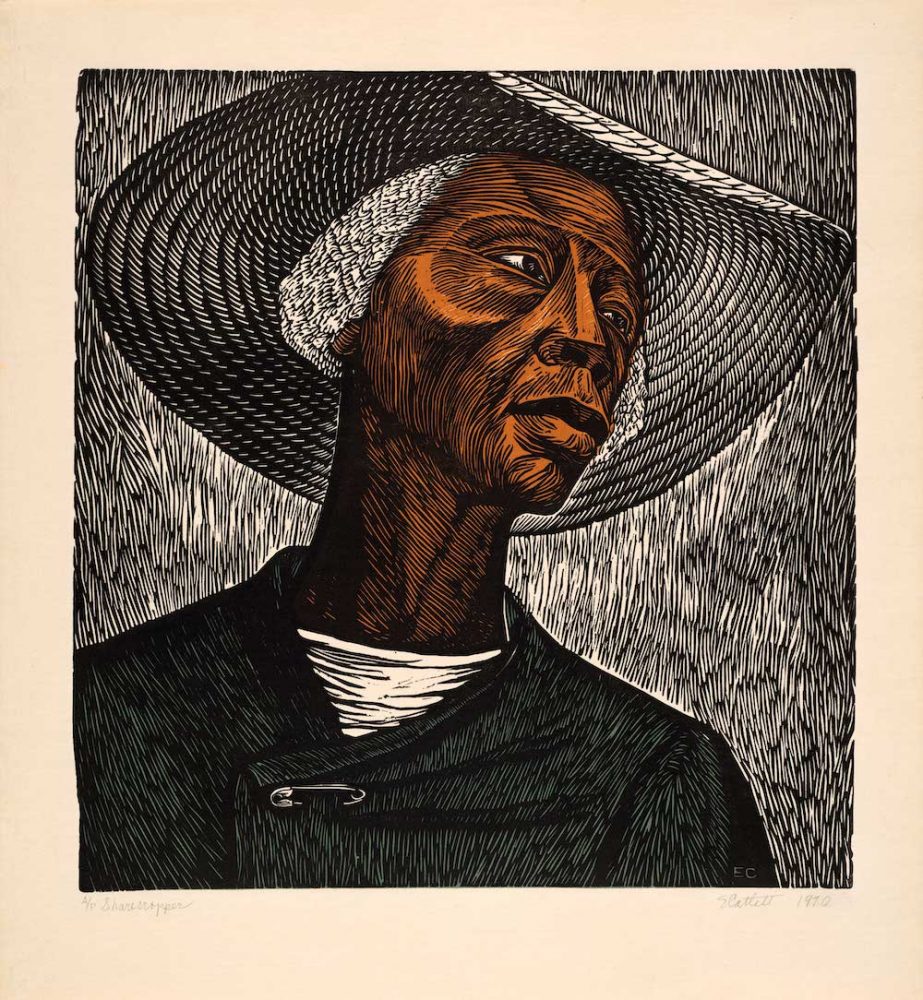 “People aren’t thinking, they’re waving flags,” said artist Elizabeth Catlett in an interview, worrying about the state of America and its rush towards fascism. It’s unclear when the interview was recorded, though it was posted to YouTube in 2010, and I would guess it took place in the early 2000s given a few context clues, including that era’s particular rise in blind patriotism. The statement’s specific context, though, matters less than its content: Catlett’s observation is one of those timeless truths; it obviously rings true today, but she could have also said it while growing up in segregated Washington, DC, or in 1962, becoming a Mexican citizen and relinquishing her US citizenship when it listed her as an “undesirable alien” because of her leftist politics. Though she had regained her US citizenship in 2002, she lived in Cuernavaca, Mexico, until her death in 2012.

Throughout her career, Catlett’s work was consistently just as prescient—and present with her own time and place—as that statement. After moving to Mexico City on a fellowship in the 1940s, she got involved with a print workshop where her activism was tied to her work—she demonstrated with fellow artists, printing signs and pamphlets supporting union workers on strike. Her prints and sculptures uplifted the worker: Field workers, sharecroppers, mothers, grandmothers (and occasionally fathers too) share space in her oeuvre with abolitionists and civil rights icons, everyone with dirt under their fingernails, everyone in all of their ordinary glory.

The Reginald F. Lewis Museum’s dynamic exhibition Elizabeth Catlett: Artist as Activist, curated by museum director Jackie Copeland, tracks the artist’s career and her recurrent themes of the valorized worker and the industrious woman. The exhibition is bookended by portraits signifying laborers in the US and Mexico—and at its center, women, children, and mothers recur as frequent subjects, along with a few recognizable abolitionists and icons. This structure suggests a motivation for wide-ranging solidarity; here there’s no distinction between the labor of raising a family, field work, and movement work.

The exhibition holds 20 prints and 14 sculptures spanning 60 years of Catlett’s career, and it begins by laying out a foundation of the artist’s politics. Walking into the gallery, you first encounter a 1968 linocut print of a woman—a sharecropper, strong and righteous, compositionally framed to make the viewer feel like they’re looking up at her in reverence. As a subject, the sharecropper had an obvious resonance to Catlett. Slavery was recent: her mother’s parents were freed slaves; her paternal grandmother had also been enslaved.

Born in Washington, DC in 1915, Catlett grew up relatively middle-class in the segregated northwest corner of the city. Her father, an educator, died before she was born, so her mother worked several jobs to support three children. Catlett attended Howard University after the Carnegie Institute rescinded her scholarship because she was Black. While a student, Catlett was involved in anti-war and antifascist protests, and later as an educator, she advocated for wage equity after learning that she and other Black educators were paid less than white teachers. Working towards her MFA at the University of Iowa and studying under the painter Grant Wood, Catlett started digging into painting what she knew: Black women, Black families, the Black working class. “She did not glorify those things that most of us aspire to,” said art historian Samella Lewis, a student of Catlett’s, about the artist’s subjects. “She was born into much more than she was fighting for.”

In 1946, a fellowship allowed Catlett to move to Mexico City with her then-husband, the artist Charles White. (They divorced that same year.) She started working with the Taller de Gráfica Popular, a print studio founded upon ideals of collectivity and solidarity with labor organizations, “creating connections between social and artistic aims and fighting militarism and fascism.” The studio and its principles of making art for the people, for social justice, mingled well with Catlett’s own—there she also met fellow artist Francisco Mora. The two married and eventually had three children.

Black motherhood was a major subject for Catlett, through which she could iconize the role and explore its varied attributes in her soft-strong style. A quartet of bronzes, depicting mother and child (one with a child and two parents), showcase the figures’ covalent multitudes: made of a monumental sculptural metal, yet they stand maybe a foot tall at most, their soft bodies retaining the sturdiest postures. Her 1982 lithograph “Madonna” celebrates a similar visual tension: a chapel window-like arch contains this mother with her two small children, her arm swooping down in front of them like a shield, the hand turned up as if to cradle the older child’s face. Motherhood, this seems to say, is a continuous negotiation between gentle curves and hard edges.

Catlett never lost form in her exploration of function. Her work was highly focused on social issues, but not so much in an explanatory, documentarian way. Borrowing elements from African sculpture and Pre-Columbian forms, she kept her references rooted in the touchable world.

The juicy glow of Catlett’s orange onyx sculpture “Nude Torso” (c. 1970s) lingers with me, the way the agate absorbs the midday light that cuts through the museum’s window-wall. The torso appears frozen in motion despite being headless and mostly limbless, her legs like a runner’s, her armless shoulders disappearing into the air, up and up, valorous, victorious. The sculpture reads like a study, simpler and free from many signifiers Catlett liked to employ, but all the emotional heft is still in there, distilled: that strength of the woman, her solidarity with all the others embodied.

It circles back, again, to those shared ideals at the Taller de Gráfica Popular. “[The artists] were thinking of the best way to reach the people who came to us for help. Peasants cheated by middlemen, miners on strike and marching to Mexico City from the north, people suffering in other parts of the world, and so on,” Catlett said in a 2003 interview about her time at the workshop. “I’m not thinking about doing things new and different. I’m thinking about creating art for my people.”

Elizabeth Catlett: Artist as Activist is on view through March 1, 2020 Photos by photo by the author and P.A. Greene, courtesy of the museum