Preserving Baltimore Stories and Amplifying Storytellers at the Peale 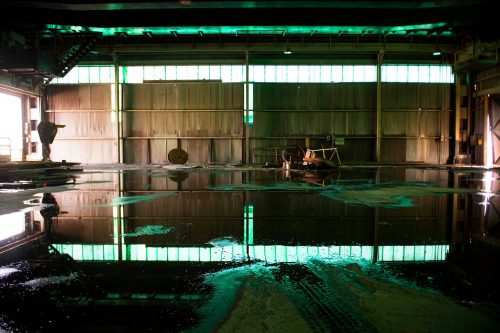 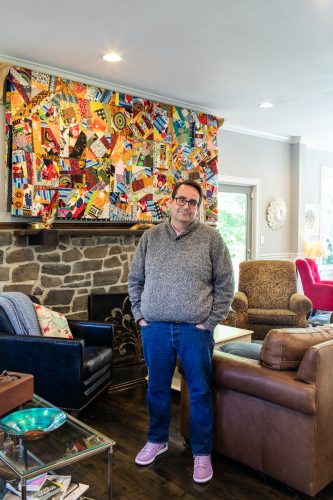 News & Opinion
Preserving Baltimore Stories and Amplifying Storytellers at the Peale
This round of renovations will make the museum a safer, more accessible place for Baltimore residents and visitors to learn the stories of the city. 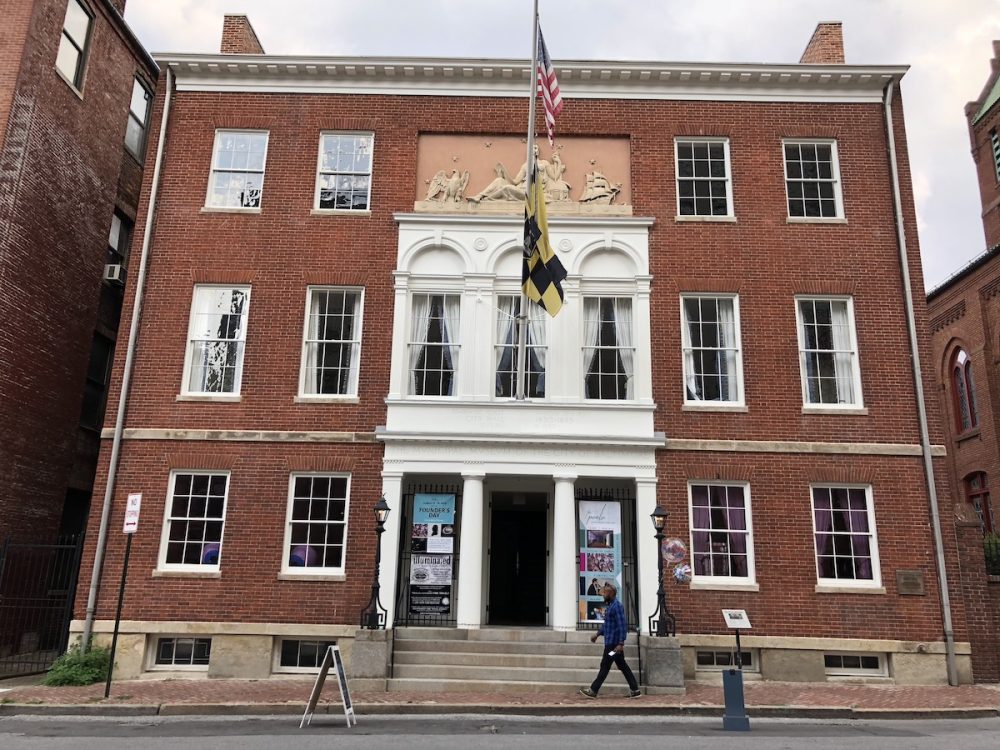 About a decade after the 1918 influenza pandemic ended, a grassroots effort from citizens and journalists saved Baltimore’s Peale Museum. Nearly a century later, and incidentally amid another pandemic, the team at the nonprofit Peale Center for Baltimore History and Architecture—now known simply as the Peale—is hoping for a similar result.

In 1928, the Peale was set to be demolished by the City of Baltimore. However, there was a strong public sentiment that the building was too historically significant to be torn down and could be repurposed instead. The Evening Sun amplified this message multiple times, including in December 1929, when journalist Gerald W. Johnson wrote an article with the headline “Baltimore’s Carnavalet” to champion the idea that a newly established municipal museum in the Peale building could rival the famed Carnavalet Museum in Paris.

This time, however, the building is in no danger of being torn down. It now has a fifty-year lease with the city and is a part of the Department of General Services Historic Properties Program, an initiative that provides support for the preservation of fourteen historical landmarks in Baltimore, including the War Memorial, City Hall, the Shot Tower, and other prominent sites.

What the Peale Museum building needs now is another round of renovations, following an initial round in 2017 that included a new roof. The second cycle will focus on internal revitalization, including fire suppression and an elevator, making it a safer, more accessible place for Baltimore’s residents and visitors to learn about and celebrate the stories of the city.

The building that houses America’s first purpose-built museum has served many groundbreaking uses over its 206-year existence. From 1830 to 1875, the building served as Baltimore’s first City Hall, and from 1878 to 1887, it was home to “Male and Female Colored School No. 1,” a primary and secondary school for African-American students.

But its very first role was Peale’s Museum and Gallery of Fine Arts, established in a Federal-style townhouse in Downtown Baltimore on August 15, 1814, by Rembrandt Peale, a portrait painter from a renowned family of artists. While he owned the building, Rembrandt pushed the boundaries of what a museum could be, exhibiting taxidermied animals alongside paintings in his museum, and perhaps most famously, displaying a massive mastodon skeleton that he and his father, Charles Willson Peale, had helped unearth. Rembrandt Peale also used gas light to illuminate his galleries, and was part of a group of investors who established what eventually became Baltimore Gas & Electric (BGE).

Today, the Peale is carrying on the artist’s innovative legacy. “They’re really re-envisioning what a history museum can look like in the 21st century, and this is definitely keeping in with the spirit of innovation of the Peale family,” says Jackson Gilman-Forlini, Historic Preservation Officer at the Department of General Services.

This innovation is visible as soon as you look at the building itself. Located at 225 Holliday Street, the Peale’s unique and almost modest appearance does not resemble the ancient Greek architecture that the word “museum” commonly evokes. “It was built on the model of a Federal-style townhouse, so the proportions are very human,” says Nancy Proctor, the Peale’s Chief Strategy Officer. “It’s never been a home, but it has that homey quality.”

A month after the museum opened, however, after the British had burned the White House and United States Capitol during the War of 1812, Rembrandt Peale, his pregnant wife, and their seven children stayed overnight in the building in an attempt to trick the British into thinking the museum was a home and leaving it unharmed if they came to Baltimore.

In another departure from the typical museum structure, the Peale is not a traditional collecting institution, lacking storage vaults and shelves full of historically significant objects and artworks. Instead, it treats stories and experiences within Baltimore City as its collection, reimagining what can be presented at and preserved by a museum, and providing access to a broad variety of artists and storytellers. The Peale stewards the world’s largest collection of digitally recorded Baltimore stories, whose intellectual property remains with the storytellers rather than with the Peale.

Adam Stab, a graffiti artist in Baltimore, is one of the many artists who have worked with the Peale over the last five years, since the building reopened to the public after a nineteen-year vacancy. The Peale’s Artistic Director, Jeffrey Kent, asked Stab to exhibit his work at the museum in 2019. (Disclosure: Kent is also BmoreArt’s Director of Outreach and Promotion.)

After attending Devin Allen’s first exhibition of his color photography and performance work, Spaces of the Un-Entitled, which Stab describes as “kind of edgy,” the artist felt he’d be able to authentically present his work at the Peale without making any compromises. “Here’s a place where I don’t think I’m going to have to pull punches,” he says.

Showing his work at the Peale not only provided Stab with what he calls one of the best shows he’s done, but also offered “a huge amount of creative growth” for him. Stab also feels the historic building, having assumed various identities over the years, has a uniquely powerful energy. “I’m one of these hardcore believers that buildings like that, especially that have lived so many lives, they have a certain soul.”

Daisy Brown, the Peale’s staff photographer and Storytelling Ambassador, echoes this idea of the Peale being a special place. “It’s like I walked into the door and I never left. I found my voice, I found my home as a creative,” she says. ”There’s an energy and a vibe in that building that I can’t describe.”

As the Storytelling Ambassador, Brown helps capture Baltimore citizens’ stories through interviews and photography. A ten-part audio-visual diary that Brown spearheaded, “Stoop Shoots,” features Baltimore residents and what their lives have been like during the pandemic. The stories include artists and volunteers and community workers, such as teacher Alisha Ward, who spoke about missing her students during a car parade for Teacher Appreciation Week, and Cynthia Gross, President of the C.A.R.E. Community Association, who discussed distributing food to her neighbors in East Baltimore.

Brown, a Baltimore native, spent time during the COVID-19 pandemic safely recording people’s experiences in East Baltimore and photographing the interviewees in black-and-white, a creative choice Brown made because she “wanted the color to live in the story and not in the image.” Along with “Stoop Shoots,” the Peale also contributes to the Lexington Market Public History Initiative with an audio storytelling project that collects and archives stories from Baltimore citizens about the historic market.

This aim to incorporate different viewpoints extends to the Peale’s leadership structure, which now forgoes a singular director for a more collaborative decision-making group. Proctor, who formerly served as the Director, proposed the change to the board last summer, and says she has long wanted to work within a more democratic power structure.

“I’ve always said that the typical structure in a museum, where you have one director at the head, is very feudal,” Proctor says. “It is so hierarchical, and it is so top-down, and I wondered, what could the other structures be?”

As the staff expanded since the nonprofit’s formation in 2012, it became clear that a different structure could work—one that is more aligned with the Peale’s mission to include everyone’s voice in their archive of Baltimore history. The Peale’s leadership team currently consists of Proctor, Kent, Chief Experience Officer David London, and Chief Administrative Officer Krista Green.

The leadership team has regular phone calls that allow them to come together and plan current and future programs for the Peale. “Because we all have our own backgrounds and strengths and perspectives, we end up coming off the call with some really exciting ideas about how we can move existing or new programs forward,” Green notes. Though there are only four people on the leadership team, the Peale’s total staff is thirteen people strong, all possessing a variety of expertise. This wealth of experience is, in part, what has allowed the Peale to continue to provide programming while the museum has closed during the COVID-19 pandemic.

After the pandemic struck here in Baltimore, the Peale, like many other cultural organizations, shifted to virtual programming. This change has, fortunately, even boosted engagement with some of the Peale’s offerings. These online programs include panel discussions on subjects like bridging the digital divide and accessibility in physical and virtual spaces, as well as screenings of documentaries like By Any Means Necessary: Stories of Survival, which focuses on youth in Baltimore who squeegee car windows to make money. The interest in these programs has shown that despite the challenges COVID-19 presents, there is still a persistent and strong desire for people to connect with each other.

Heather Shelton, the Peale’s Digital Curator, notices a “top layer sense of optimism” that is constant throughout these programs. She also finds that “even through all of the crises that we’ve experienced,” people are still engaged with what’s going on around them. “They want to hear about what’s happening, they want to hear from artists, [and] they want to think about how they can take action steps to improve their lives and the lives of people in their communities.”

The interest in [The Peale's virtual programming] has shown that despite the challenges COVID-19 presents, there is still a persistent and strong desire for people to connect with each other.

The success of these online offerings and the hope sparked by these events reinforces the importance of providing a space for people to connect, and underscores the significance of preserving the Peale museum building as well as honoring the stories and storytellers’ cultural and historical contributions.

Speaking about past events the Peale has hosted, Proctor says, “To see these gatherings, where these people meet each other face to face, who would never normally cross paths with each other—there’s something really powerful there, and that’s hard to pull off online. You need just that serendipity, just the total chance that people get thrown together.”

To ensure more people get that chance, the Peale is raising money for their building in a variety of ways. Through the Buy-A-Brick Campaign, supporters can buy a personalized brick that will be used to repave the Peale’s Pollinator Garden. The Peale is also offering room-naming and sponsorship opportunities throughout the building. Additionally, people can sponsor a storyteller membership, which will help pay the Peale’s staff to work with Baltimore’s storytellers and share their stories.

Storytelling is especially vital because, in addition to building connections between people who are alive today, it can provide a crucial historical function too, giving future generations a better understanding of their own circumstances. For example, stories about the 1918 influenza pandemic and the 1814 British burning of the United States Capitol have been used to contextualize the COVID-19 pandemic and early January’s violent Capitol invasion, respectively.

In a similar way, the community stories the Peale preserves, as well as the building’s own history, can help refute negative portrayals of Baltimore that cycle through the news and can help residents understand their own experiences through those of their contemporaries and historical counterparts. Stories about neighbors coming together to help each other in times of need and people embodying the resilience needed to overcome seemingly impossible circumstances, are timeless and connect generations of Baltimoreans. From everyday stories to extraordinary ones, the Peale collects them all and teaches us just as much about Baltimore’s present and future as it does its past.

This article was made possible with underwriting support from The Peale. Support the Peale’s renovations and innovative storytelling by donating here.

Images courtesy of the Peale