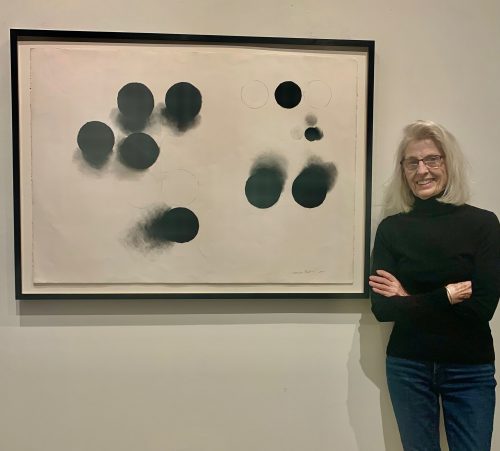 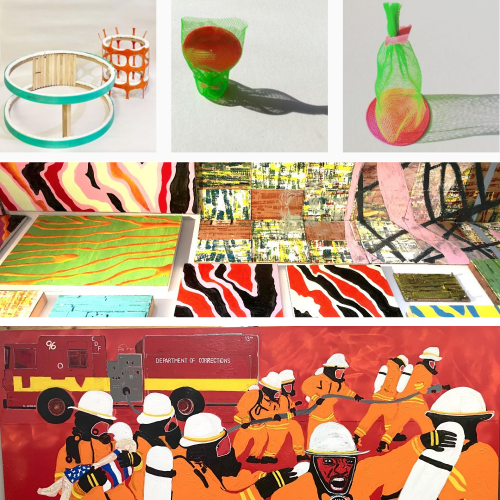 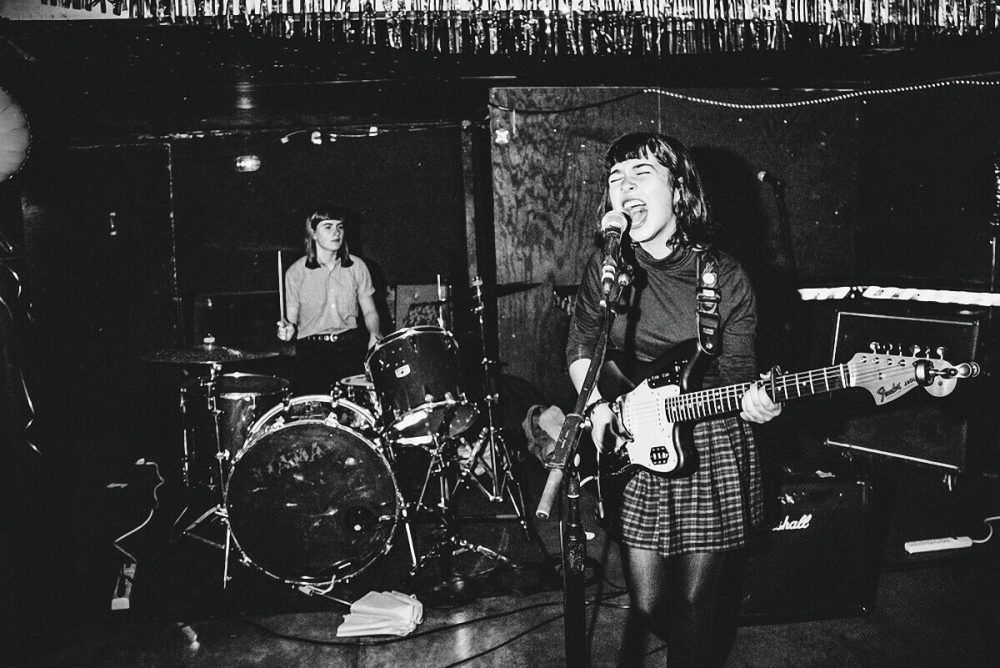 Excerpt: Lindsey Jordan looks a little lost. At 10 a.m. On the Monday after Thanksgiving, she pokes her head through the side door of the Ottobar with a quizzical look, as if unsure that she’d come to the right place.

She’s been to this veteran Remington rock club many times before, even as recently as two months ago, but not this early, or empty, with the crowds that usually file in under the dusty disco ball either back at work or still in bed after the long holiday weekend.

Then she spots us and walks in.

“Hi, I’m Lindsey,” says Jordan, extending her hand with a casual warmth and half-smile, seeming every bit the ordinary 22-year-old—a backpack slung over her shoulder, dressed in a white turtleneck, vintage blouse, slate-gray track pants, and Onitsuka Tiger sneakers, which altogether feels like a fashion nod to her birth year, 1999—even as a hot-pink photo shoot backdrop awaits her beside the stage.

She’s been home to visit friends and family, catching up on rest in her Ellicott City bedroom, where old Polaroids, concert ticket stubs, and Beach House posters still speckle the turquoise walls, where she practiced her first guitar chords, wrote her first songs, and eventually formed her first indie-rock band, Snail Mail.

Excerpt: Seven row houses less than a mile from Johns Hopkins University that are owned by the prestigious university and have been vacant for years are now scheduled for demolition.

The plan once the buildings are demolished, Hopkins has said, is to turn the area into “a green space.”

Since Hopkins announced this plan in 2020, residents of Baltimore City’s Charles Village neighborhood—where these soon-to-be-gone buildings currently sit, vacant and partially crumbling—have pointed out that the row homes currently overlook green space. Specifically, the Wyman Park Dell, a 16-acre park that is used by residents as an all-purpose gathering space, meetup location for activists, soccer field, dog park, concert venue, and much more.

Hopkins had cited the dilapidation of the buildings and the lack of elevators in the buildings as reasons why they needed to come down. Residents have accused Hopkins of intentionally neglecting the buildings over 20 years, facilitating this now-imminent demolition.

Excerpt: Maryland was among the states that experienced the largest decreases of sheltered homeless people from 2020 to 2021, but it also saw one of the largest increases of unaccompanied youth in homeless shelters during that period, according to a new report from the U.S. Department of Housing and Urban Development (HUD)

The first part of HUD’s annual homelessness report provides point-in-time estimates of communities’ homeless populations, including total populations and breakdowns of specific demographics. The data was collected on a single night in the last 10 days of January 2021.

HUD added that data could be affected by reduced occupancy in some communities and homeless individuals’ concerns about the safety of staying in shelters due to COVID-19. Therefore, the point-in-time estimates “should be viewed with caution, as the number [of sheltered homeless people] could be artificially depressed compared with non-pandemic times.”

House Bill 481, sponsored by Moon, would decriminalize the possession of syringes, hypodermic needles and any other tools necessary to introduce drugs into the body intravenously.

Under current law, the first offense penalty for heroin possession — the drug inside the syringe — is one-year imprisonment or a $5,000 fine.

“This high risk for those carrying syringes leads to what we’ve heard … police complaining about the risk of pricks from people hiding them when they’re being searched, from people sharing dirty needles because they’re now a scarce resource and people dumping them in public places because they don’t want to get caught with them and risk four years,” Moon said during a bill hearing in the House Judiciary Committee Tuesday.

Excerpt: Maryland House Speaker Adrienne A. Jones wants voters to enshrine abortion rights in the state constitution, pushing a measure that could be on the ballot this fall.

Flanked by female lawmakers and Planned Parenthood of Maryland leaders, Jones (D-Baltimore County) launched the effort Monday against a backdrop of mounting challenges to the landmark Roe v. Wade case.

“This is a fundamental issue of liberty that cannot and should not be chipped away or bargained for,” she said.

Maryland is part of a wave of Democratic-led states seeking to bolster abortion protections ahead of an impending Supreme Court decision this summer centered on a Mississippi law banning abortions after 15 weeks.

Supreme Art in Hampden
by Jermaine E. Davenport
Published February 11 in The AFRO

Excerpt: “The Pursuit of Perfection” is the name of the current exhibition–Feb. 1 through March 14–by acclaimed, up-and-coming Baltimore artist Wendell Supreme Shannon in the new gallery space of Davenport Arts & Imports on “The Avenue” in Hampden. On view and for sale are more than 20 recent, mostly large-format acrylic-on-canvas paintings of Supreme, as he is known professionally, in his signature style which he calls “Perfectionism,” featuring eye-popping colors and immaculate, abstract geometric forms in elaborate compositions.

A protege of internationally known local artist Larry “Poncho” Brown, Supreme was born in 1990 in New York City but raised in Baltimore where he attended Dulaney High School and Morgan State University where he majored in business administration. At age 19 Supreme’s art career started serendipitously when, diagnosed with several autoimmune diseases that affected the use of his hands, Supreme as a patient at Johns Hopkins Hospital began drawing simple geometric forms for manual therapy. Upon recovery a clear talent for art developed to where he could sell drawings and paintings locally and in recent years be shown at commercial galleries in England, Jamaica, and the prestigious Art Basel in Miami, Florida. Also interested in public art in Baltimore in support of social causes, Supreme in 2019 created the courtyard mural at the Poe Homes in Poppleton, and in 2020 collaborated on the Black Lives Matter mural at City Hall.

Excerpt: Baltimore City has so far spent 3% of funds the city received through the federal 2021 American Rescue Plan Act (ARPA) for responding to the coronavirus pandemic’s health and economic impacts, according to a new online dashboard tracking the city’s allotment of ARPA funds.

Baltimore City government on Monday launched its ARPA Reporting Center, which shows how the funds are being allocated.

“ARPA is a significant opportunity for the City of Baltimore. I established the Office of Recovery Programs to ensure we make strategic investments in Baltimore’s future and equitably deliver resources and services to City residents,” Mayor Brandon M. Scott said in a statement. “In line with my administration’s commitment to transparency and my Action Plan for ensuring the Responsible Stewardship of City Resources, setting up this ARPA Dashboard will allow everyone to see how much of an impact our investments are making.”

“We are excited to launch the ARPA Dashboard because it helps meet our goals of accountability and transparency,” Chief Recovery Officer Shamiah Kerney added. “The public should know how every dollar is invested.”

Excerpt: In 2011, Albert Birney met actor-director Kentucker Audley at the Maryland Film Festival. They vibed creatively, and stayed in touch. Shortly thereafter, Birney created a series of six-second films about a Hawaiian-shirt-sporting gorilla named Simply Sylvio, and was racking up lots of views on the microvideo platform Vine. Audley had an idea: What if they turned those shorts into a full-length film? The result, Sylvio, co-written and co-directed by the two men and co-starring Audley, was a film festival smash hit.

Now, Birney and Audley are back with Strawberry Mansion, an impossible-to-describe (by design) surrealist sci-fi romance/fantasy that features Audley as Preble—a buttoned-up “dream auditor.” Preble visits an elderly woman named Bella, who has stubbornly refused to submit her dreams to the government.

The film opens this Friday, February 18, at the Charles Theatre. But before that, on Thursday, you can catch a special screening with Birney, who will be around for a post-viewing Q&A. Dan Deacon, who scored the film, will also be in attendance.

Excerpt: Baltimore activists and lawmakers who helped lead the push last year for sweeping statewide police reform are grappling this year with a harsh irony:

As part of that package, the 2021 Maryland General Assembly passed HB670, which required jurisdictions to set up Police Accountability Boards (PABs) as the first place citizens would bring misconduct complaints in a revamped system.

But after compromises watered down the bill, the structure of the new PABs ended up weaker overall than the Civilian Review Board (CRB) already in place in Baltimore.

“If we don’t get this right, we’re going to be going backwards,” Sergio España, director of engagement and mobilization for the ACLU of Maryland, points out.

This programmer and former refugee combined his love of beats and tech into an African music streaming startup
by Stephanie Beecher
Published February 16 in Technical.ly Baltimore

Excerpt: For much of Leonard Novati’s early upbringing, life was confined inside the walls of a refugee camp.

Like many Burundi families between the 1970s and ’90s torn by civil war, Novati’s parents were forced to flee their home country. They crossed over into Tanzania, and while the family found safety from the ethnic violence, rarely did they encounter the same freedoms or opportunities afforded to fully fledged citizens. They weren’t even to interact with the locals.

Novati grew up with his parents and eight sisters in a two-room tent, surrounded by walls stacked with mud bricks. There was no computer or telephone. In the stillness of the moonlight, he could hear lions roaring in the distance.

His favorite escape came through radio. That’s when he fell in love with music.

“Music was a way to kill time, it was a way to transport,” Novati told Technical.ly. “Young people didn’t have a radio, but our parents loved music. We would take it, turn on the music channels and listen to American music, African music. We loved hip-hop and R&B. 50 Cent, Biggie, the known guys. We didn’t understand what they were saying, but they were our favorite artists.”

In Baltimore’s streets, interrupters face danger to stop a cycle of violence
by Juana Summers
Published February 13 in WAMU

Excerpt: On a recent Wednesday, Dante Johnson walked up and down Belair Road in northeast Baltimore, a cigarette between two fingers and one earbud in his ear to respond to phone calls.

Johnson is a site director for the nonprofit organization Safe Streets, which operates in 10 Baltimore neighborhoods including here in Belair-Edison. He’s always assessing the area around him, always stopping to say hello to a familiar face or introduce himself to a new one.

“This is an area that we consider a hot spot,” Johnson explains as he walks down the sidewalk. It’s just before lunchtime, not particularly crowded. “Our violence interrupters, they work out here in pairs every day. We try to gauge the people down here and make changes in their life.”

Violence interrupters such as Johnson are one of the ways this city is trying to address crime. Baltimore routinely ranks among the cities with the highest number of per capita homicides in the U.S. — 2021 was the seventh consecutive year in which the city saw more than 300 homicides.

And now, violence interrupters have become victims to violence themselves. The program has been in the spotlight after a Safe Streets worker was killed in January — the third violence interrupter killed in just over a year. It comes as homicide rates have risen in cities across the country in the last two years.