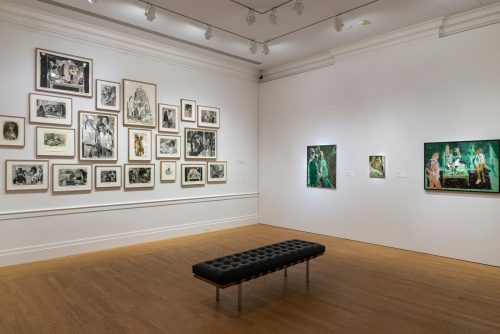 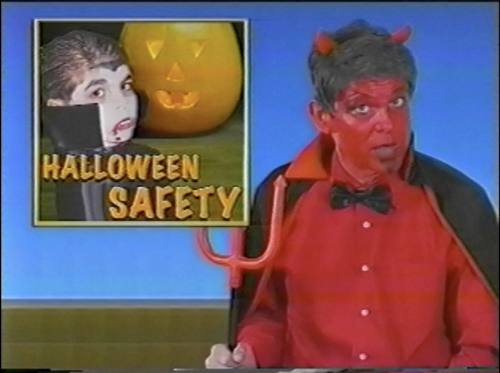 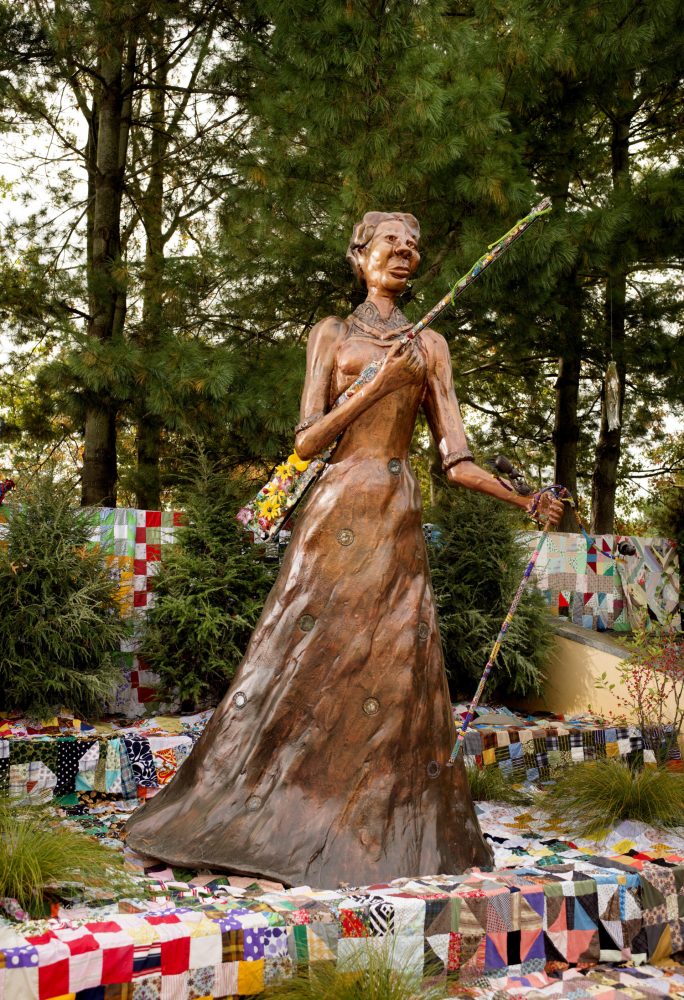 This week’s news includes:  A new beginning for the 208 year-old Peale museum, a preview of the Great Migration exhibition at the BMA, Jaz Erenberg’s murals, and more reporting from The AFRO, Baltimore Banner, The Art Newspaper, and other local and independent news sources.

Excerpt: After a five-year, $5.5 million renovation, The Peale has officially reopened as “Baltimore’s community museum.”

More than 150 people gathered on Saturday morning as supporters Noreen Herbert and The Rev. Douglas B. Evans Jr. cut a turquoise ribbon to celebrate the end of construction and the start of a new chapter for the Holliday Street landmark, which first opened almost exactly 208 years before.

What guests saw was a new kind of cultural center for the 21st century, a place that’s intended to showcase Baltimore-based artists and present stories about the city – in a wide range of formats.

For Black Artists, the Great Migration Is an Unfinished Journey
by Holland Cotter
Published August 4 in The New York Times

Excerpt: Midday, midweek, in mid-90 degrees midsummer, the streets of a downtown historic district of this Southern capital are all but empty. They’re like a film set, perfect in period detail but past-use and abandoned.

A patch of sidewalk embedded with the mosaicked words “Bon-Ton Café” marks the spot of what was, a century ago, Jackson’s toniest restaurant. In the nearby King Edward Hotel, built as the Edwards Hotel in 1923 for travel swells, later a gathering spot for blues musicians, then derelict until a recent revamp, foot traffic is sparse. Across from it, trains regularly rumble into a Georgian Revival-style Union Station, but few passengers disembark or board.

Decades ago, transcontinental trains and buses leaving the old Art Deco Greyhound depot a few blocks away, did brisk business. And some of that business came from carrying Black Jacksonians northward, eastward and westward, out of a repressive and dangerous Jim Crow South, to what they hoped would be a safer and more prosperous life in cities like Chicago, Detroit, New York, Los Angeles.

Excerpt: In the early ’90s, while nearing the end of his life, Reginald F. Lewis, a successful businessman and one of the wealthiest African American men in the country, envisioned the construction of an educational center in the heart of downtown Baltimore City that could illuminate future generations about the remarkable history of African American art and culture in Maryland.

Lewis died before his dream could be manifested.

Excerpt: A sculpture of Maryland abolitionist Harriet Tubman will be displayed outside of the Banneker-Douglas Museum in Annapolis, starting Sept. 1.

The sculpture, created by Baltimore artist Joyce J. Scott, is titled “Araminta with Rifle and Vévé.” It will be on display at the museum from Sept. 1, 2022, through Sept. 30, 2023.

Its exhibition coincides with the Harriet Tubman Bicentennial, which celebrates 200 years since Tubman’s birth in Dorchester County, Maryland, as well as September as International Underground Railroad Month.

Excerpt: Art Lien botched his first courtroom assignment. He had graduated from the Maryland Institute College of Art in 1976—“painting houses and freaking out about what to do with my life”—when he learned WJZ-TV needed a sketch artist to cover Gov. Marvin Mandel’s corruption trial.

He went to the newsroom, drew a few people working at their desks, got sent to a pre-trial Mandel hearing, and was promptly fired after his watercolors ran all over the non-absorbent paper he’d brought.

Desperate to redeem himself, he explained his blunder (the paper worked in the studio but not the courtroom) and offered to tackle another assignment for free. That turned out to be the trial for the killing of Councilman Dominic Leone at City Hall, whose murderer, with the help of soon-to-be legendary Baltimore defense attorney Billy Murphy, was found not guilty by reason of insanity.

Excerpt: Tropical plants are taking root in Upper Fells Point, where Afro-Latina muralist Jaz Erenberg is turning her home into a work of art.

“For the Love of Tropics” is the title of a three-story mural that Erenberg is painting this summer on the stucco front façade of her house at 127 S. Durham St.

A 2017 graduate of the Maryland Institute College of Art and former Designer-in-Residence for the Neighborhood Design Center, Erenberg heads Jaz Erenberg ART LLC and works as a muralist and community organizer, painting “community-engaged” murals for public schools and neighborhood associations.

Excerpt: Two of Vermeer’s disputed paintings have been scientifically examined for an exhibition that will open at the National Gallery of Art (NGA) in Washington, DC in October. Girl with a Red Hat (around 1666-67) and Girl with a Flute(around 1665-75) have in the past both been questioned by many specialists.

The show Vermeer’s Secrets (8 October-8 January 2023) will present all four of the NGA’s paintings by or attributed to Vermeer—the two that have been questioned and two others that are fully accepted as authentic masterpieces. The lead curator, Marjorie Wieseman, is setting out to examine “what makes a Vermeer a Vermeer”.

Since the four works are nearly always on show, the NGA took advantage of the Covid closure in 2020-21 to move them to their conservation studio. There they were examined using the latest imaging techniques to penetrate the layers of paint.

Excerpt: Ask the people who led the effort to save the historic Roland Water Tower – and who are now working to create a park at the base of it – and they’ll say they were meticulous about consulting all of the nearby neighborhoods.

“We bent over backwards to make sure everyone’s voice was heard,” said Mary Page Michel, who chairs the Roland Park Community Foundation (RPCF), pointing to outreach efforts that included meetings, fliers, signs on the tower, eblasts and online surveys to consider design choices.

But left out and disrespected is just how Quiana Cooke and some other residents of Hoes Heights feel.

Excerpt: At the end of the day, when the kids finally gave up on drawing chalk art in the alley and the never-ending barbecue under the shade trees had no more takers, and the boom boom-boom of the music settled down, Sonia Eaddy started slowly for the edge of the grass with mic in hand.

She was hard to read: Was she tired? Was she struck with stage fright?

I had only met her that day a year ago in July 2021. She was a welcoming host for the Save Our Block rally to preserve a historic street in Poppleton, a West Baltimore neighborhood, whose most famous resident was Edgar Allan Poe, and whose early 19th-century house physically sits at the end of housing projects known as Poe Homes. The homes now look onto a new multistory complex, with a gleaming stainless steel façade. This surreal juxtaposition — a rec center that has been padlocked for decades, a swimming pool that stands mockingly empty on summer days, and her own lovingly restored home facing a reality that it could be ripped down by a backhoe in a day all spin around as taunting proof about her city. As she would put it, “The city does what the city does best — nothing.”

AFRO News on education: celebrating 130 years of a journey worthwhile
by Fatiha Belfakir
Published August 15 in The AFRO

Excerpt: Since its establishment in 1892, the AFRO American Newspaper has strongly believed in the role of education as a key to both eradicate racism and transform African-American lives. AFRO reporters have covered a variety of stories related to education including school segregation and funding; experienced and qualified educators; academic success, performance of Black students and limited educational resources for socially excluded communities, to name a few.

The road was bumpy during an era of oppression, yet, AFRO News walked with pride and determination to lead Black society to a better destination with equal educational opportunities.

Myrtle Webb, Ed.D, 79, a former teacher and school principal specialized in education and curriculum development, witnessed the evolution of the AFRO American Newspapers in covering stories related to school segregation, Black teachers and African-American students’ performance. Webb recalls coverage of education topics for the Black community, including the Brown v. Board of Education and Ruby Nell Bridges cases, which mark the ending era of legalized school segregation in the United States.

Episode 49: Beneath the City
by This is Love Podcast
Aired July 27

Excerpt: Evan Woodard explores the city of Baltimore from underneath. He searches for things buried underground—things that some people might consider trash. We decided to go to Baltimore and join him on a dig.