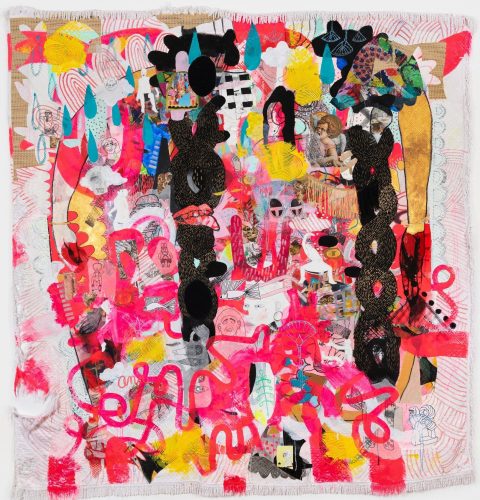 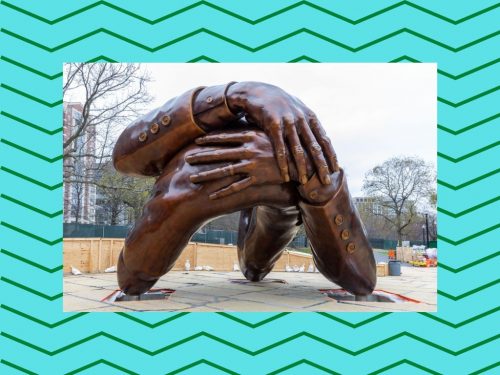 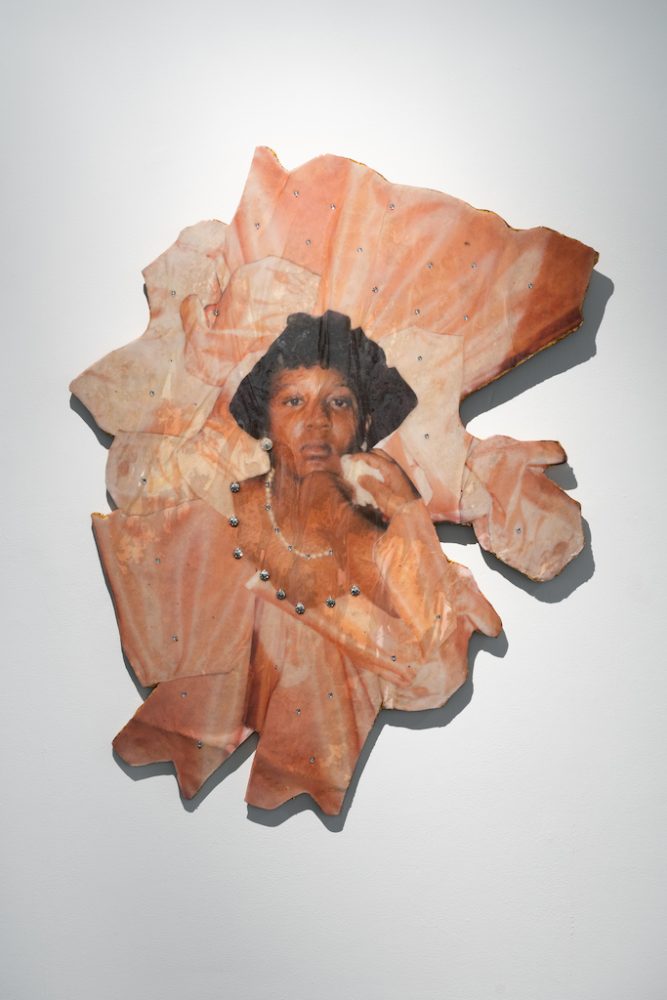 Lionel Frazier White III’s solo show Beyond the Frame is a subtle exploration of the lived experience within a gentrifying city through photography, video work, and found objects. White is one of five fellows for 2020-22 at Hamiltonian Artists, which provides a stimulating environment, guidance, and a stepping stone for emerging artists. Themes of fragmentation, remembrance, and celebration flow through White’s varied yet cohesive body of work. As I pass through the space, images and objects implode, change, and become re-assembled.

Core to White’s body of work are family photographs in antiqued frames that offer a glimpse of his past within DC, where he was born and currently lives. These moments of intimate history portray stories of people within the city’s wider social fabric. While some works are simply enlarged photographs like “Hall of Grads” and “No title,” others are layered with soft white translucent paint which appears like a veil.

This motif of a veil is referenced across several works through white paint and the picture of actual fabric, and it may be a nod to W.E.B. Du Bois’s writing about “the veil.” For Du Bois this symbolized the barrier that exists between Black and white people and hinders an authentic understanding and equality between them. This subtle allusion feels essential since it grounds White’s work in both lived experience and historical theory. Furthermore, its repetition not only drives the point home, but also serves as a guiding idea.

In the foreground a female figure, presumably Aunt Dorothy, is seated solemnly gazing at the viewer while another figure, whose shoulder and arm are visible, is wiping the face of the sitter. The title references the slang term “serving face” meaning someone posing for a photograph with an intense, un-amused expression. It is ambiguous if the other female figure is wiping tears or make-up from her cheek. The white paint that lightly coats the part of the image focuses my attention on Aunt Dorothy, but serves as a reference to the whitewashing of Black culture and history.

A portion of this photograph including Aunt Dorothy’s face, the hand, and parts of her dress are enlarged, reprinted, and collaged onto wood in “Aunt Dorothy (La Négresse Venus of DC).” The pink satin fabric seems to envelop the figure like a large ribbon; she is in the center still gazing at the viewer unamused. The elaborate dress and pearl necklace suggest she has attended a festivity.

This layering and addition of epoxy adds an aspect of plasticity. White’s use of family photographs creates moments of intimacy and nostalgia as we are invited to view aspects of his family’s past. The way he fabricates larger narratives around his history reminds me of the phrase the “personal is political,” which became a popular political slogan during Second Wave feminism and referred to how women’s personal experiences stemmed from inequality and the larger social and political standing.

I’m also drawn to one of two video works in the show, “around the way girl.” The three channel video consists of the scholar and author Saidiya Hartman, who reads an excerpt from her book, Wayward Lives, Beautiful Experiments.

Simultaneously, to the right of Hartman, there is a video of performers singing outside and individuals dancing and celebrating. At times a screen in the middle pops up too, adding another layer of music and bodies in movement to the ensemble. This technique of layering, which could allude to the variety of city experiences, is also present in the other mixed-media works where the artist pairs different elements for intriguing juxtapositions. Hartman’s writing grounds and contextualizes the exhibition, its ideas and themes flowing through other works in the gallery.

While the artwork label does not explicitly state or reference Hartman, I found her text riveting and I searched until I figured out who she was and what book she was reading from. A particularly important segment for me is when Hartman reads, “they fail to discern beauty, only see disorder, missing all the ways Black folks create life” and how they fail to see a Black girl as a “thinker.” Her text is concerned with voyeurs and social scientists who enter Black neighborhoods only to capture an aspect of the life there and not the entire picture. I admire the conversation that White constructs with Hartman through his collage work.

As I listen to the narrative, the text returns again and again to a girl’s experiences of Blackness. The story is powerful as it centers on Black bodies on city streets and the subsequent objectification that can happen. Hartman’s discussion of the “social scientists” and “voyeurs” underlines how ethnographic photographs, studies, and the media can only give a certain part of a picture and the reader/viewer needs to actively look beyond the frame. I apply these ideas to the rest of the work as a walk between objects and narratives.

“around the way girl” feels like a triptych with two collages positioned on its either side, both called “Silk Tapestry.” White has assembled prints that use images of the pink dress motif and images of another fabric that is blue and black with small flowers cut into rounded shapes and assembled into organic, fluid, and tumultuous forms. The images resemble a ribbon that is holding and adorning curling hair and they feel like references to the girl that Hartman had read about.

White’s act of incorporating personal history also introduces a human element that is sometimes absent in the larger narratives of gentrification and social science studies. By deconstructing and reconstructing images and declaring them “Art” he elevates the status of these simple photographs. These elements may elicit more empathy, and the viewer may be more likely to feel the pressing nature of these issues.

One of the more architectural works in the show is “Window Pain,” a mixed-media work made from a six panel windowpane and reproductions of a photograph. The same photograph, which also appears in “My Mother’s Child (Veil),” depicts two female figures—one in a graduation gown and cap—is dissected and repurposed in each window panel.

The window, a found object, symbolizes home and a portal through which we can look out onto the city and also into a family’s life. The panel style suggests a storyline and as I “read” from left to right the photographs of the figures become more and more cut up and abstracted. Eventually, in the last panel, the figures are entirely absent. This slow disappearance and dismemberment combined with the homophone in the title could suggest the passing of family members and the destruction of communities that is rampantly happening in DC, Baltimore, and many other major cities through gentrification.

One particularly exciting aspect of the show is the “Black Library,” a small collection of books that the viewer can read including Art as Social Action by Gregory Sholette, Chloe Bass and Social Practice Queens, Art on My Mind by bell hooks, Critical Race Feminism by Adrien Katherine Wing, A Way Out – America’s Ghettos and The Legacy of Racism by Owen Fiss, and Police Brutality by Jill Nelson.

Refreshingly, White has situated his work within contemporary theory by Black women scholars. I enjoy the inclusion of the books because it portrays a larger social framework. Art and the artist do not exist in a void. They are bound, affected and inspired by their surroundings and everyday life. It feels important to shed light on the work of authors who write about experiences and issues that White explores within his work as a way to bridge different fields.

Beyond the Frame is a superb and exciting exhibition that experiments with fragmentation and layering while offering snapshots of family history within a larger narrative of the city.

Pictures of White’s female family members are recurring symbols, more and more dissected within each iteration. Using collage, video work and found objects, White dissects gentrification and whitewashing of Black communities. I feel both sadness and nostalgia looking at the family photos, while the layered collage works have a jarring effect. The exhibition is both commemorative and celebratory and it urges the audience to think beyond established boundaries.

Lionel Frazier White III: Beyond the Frame is on view at the Hamiltonian Artists between December 17-January 21, 2023.