The Vanity Gallery – Just Avoid Them 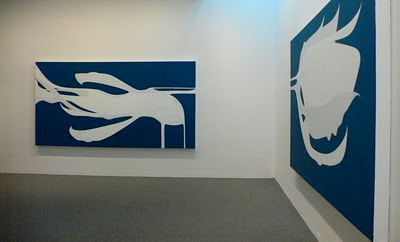 Well, I didn’t predict it – this year. But, BmoreArt’s Readers did!

On the reader’s poll, Ryan Hackett received 24% of the votes, the majority of the seven finalists. Although there is no second prize award in the Sondheim Competition, BmoreArt readers gave Matthew Porterfield a close second place, with 23% of the vote, with Leah Cooper, Nate Larson, Karen Yasinsky, and Matthew Janson, respectively, listed in order from 3rd to 7th. If you voted this year, thanks for sharing your expertise and too bad you Hackett fans didn’t bet real dollars.

Congratulations to Ryan Hackett! Despite being the only Washington, DC artist on the list, he is a terrific pick for this year’s award. I can’t wait to see what new ideas and projects this award will bring.

Official BMA Press Release: Mayor Stephanie Rawlings-Blake and the Baltimore Office of Promotion & The Arts are proud to announce that Ryan Hackett is the winner of the 2010 Janet & Walter Sondheim Artscape Prize. The coveted $25,000 prize was presented at this evening’s awards ceremony at The Baltimore Museum of Art. Works of art by the prizewinner and six other finalists are on view at the BMA until August 1.

“There comes a certain point in your life when it is hard to keep going, but sometimes things happen,” said Hackett. “There are a lot of things that I’d like to do and couldn’t afford. This prize makes them possible.”

Hackett received his Bachelor of Arts in 1999 in studio art from the University of Maryland, College Park, and a Master of Fine Arts from San Francisco Art Institute in 2007. In between his academic pursuits, he co-founded Decatur Blue, a Washington, D.C.-based artist collective that looked to challenge the commercial constructs of the art world by serving simultaneously as curator, artist, and gallery. Hackett’s work has been seen in the solo exhibition Interspecies Transmission at G Fine Art in Washington, D.C., in the group show Freaks Of Nature at the Bronx River Art Center in Bronx, NY, and the 2009 Sondheim Prize Artscape Prize Finalists exhibition at The Baltimore Museum of Art.

The Sondheim prize is part of Artscape, America’s largest free celebration of the arts, taking place July 16-18 along Mount Royal Avenue and North Charles Street. It is designed to assist area visual artists in furthering their careers by allowing them to pursue tracks in their work that may not otherwise be possible. The winner was determined by an outside panel of three jurors: Robert Nickas, an independent New York-based curator, writer and art critic; Magdalena Sawon, owner and director of New York’s Postmasters Gallery; and Hamza Walker, director of education and associate curator of the Renaissance Society at The University of Chicago.

ARTSCAPE
Artscape returns July 16-18 with more than 150 artists, craftspeople, and fashion designers from across the country; visual art exhibits both on and off site; live concerts on four outdoor stages; performing arts including dance, opera, theater, fashion, film, and classical music, hands-on projects, and children’s entertainers; three street theater locations; and a delicious international menu of food and beverages. Artscape is presented by Mayor Stephanie Rawlings-Blake and produced by the Baltimore Office of Promotion & The Arts.

THE BALTIMORE MUSEUM OF ART
The Baltimore Museum of Art is home to an internationally renowned collection of 19th-century, modern, and contemporary art. Founded in 1914 with a single painting, the BMA today has 90,000 works of art—including the largest holding of works by Matisse in the world. The Museum is also distinguished by a grand historic building designed by the great American architect John Russell Pope and a scenic three-acre sculpture garden that is an oasis in the City. As a major cultural destination for the greater Baltimore region, the BMA welcomes more than 250,000 visitors annually with an exciting program of dynamic, critically acclaimed exhibitions; lively concerts, lectures, and performances; and imaginative activities for families. Thanks to extraordinary government and private support, general admission to the BMA is free for everyone, every day, so that great art is accessible to all.