The Crunch: Jon Duff and Jonathan Latiano at City [...] 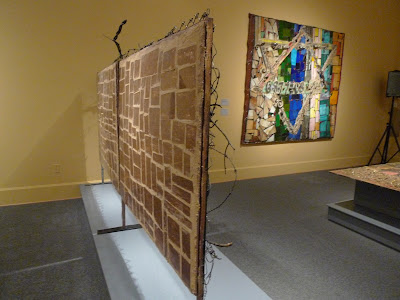 From a distance, it looks like a billboard. “Montgomery Bus Boycott” is spelled out in large block letters on a swirling, earthy-colored background. Upon closer inspection, the billboard is actually a huge mosaic of shoes. White shoes, brown shoes, red shoes, and black shoes all come together to spell out the eponymous title, and, more importantly, to suggest a shared history of standing up for one’s rights.

In Each Other’s Shoes, Loring Cornish’s exhibit at the Jewish Museum of Maryland, offers a number of connections between the African American experience and Jewish history, creating parallels between the struggles of both peoples in more than twenty works of art. Joining a shared legacy of abuse and resistance, triumph and tragedy, Cornish’s exhibit examines specific events and figures from both Jewish and African American history in freestanding sculpture and large wall pieces in his characteristic mosaic style.

Cornish has built a notable reputation for his glass mosaics, so his use of shoes in several new works is a significant change. Within a Jewish context, the shoes allude to holocaust memorials that feature vast displays of victim’s shoes, each pair symbolizing a life lost, and taken together, the incomprehensible scale of destruction. In the case of “Montgomery Bus Boycott,” the shoes also hearken to the many African Americans who walked to work and school, rather than ride segregated buses, in that 1955 to ’56 civil rights protest. To bind the shoes together, he used the red earth from the site of the protest: Montgomery, Alabama. The mosaic is mounted on a freestanding wall called a stelae so that viewers can walk around the mosaic and view the artist’s work on both sides. To read the whole article, click here.

The exhibit, In Each Other’s Shoes, will be on exhibit at the Jewish Museum of Maryland until July 17, 2011.