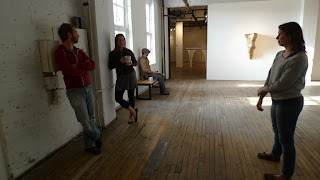 Urbanite E-zine Feature – “Suspension of Disbelief: In Hypotheses, Andy Holtin tests out a number of theories centered around the balance of artificiality and authenticity” by Cara Ober

She minds her own business. Her eyes blink and stare straight ahead. Then, quickly, she glances over at him, catches the edge of his expression, then looks away. His face remains unchanged, but something pulls him towards her. He steals a glance at the side of her face, then looks away. Seconds pass and both continue to breathe, blink, and look forward. Then, her face darts towards him again. Then his toward hers. For a fraction of a second, the corners of their eyes meet, and then they both pivot and look away.

This familiar dance goes on indefinitely in Glance, a kinetic sculpture by Andy Holtin, part of Hypotheses: Recent Work and Collaborations at Gallery Four. The faces appear on separate video monitors, hung at eye level, that move in synch with the faces on their screens, powered by an electromechanical system designed by the artist. The piece is captivating, seamlessly uniting technology, a simple gesture, and a romantic narrative into a work of art anyone can relate to.

In Hypotheses, Holtin, a sculpture professor at American University in Washington, D.C., explores this line between the mechanical and the emotional, the artificial and the authentic. The show includes seven works created from a number of different materials, including cardboard, wood, paper, computer screens, and hand-built machines. Rather than obscuring the mechanisms and processes behind his constructions, Holtin prefers to incorporate them, adding an aspect of performance and theater, and enticing his viewers to construct their own narratives and impose meaning. To read the entire article on the Urbanite Website, click here.

All proceeds go directly to Baltimore Action Legal Team (BALT), an organization that offers legal services to protesters and has been operating a bail fund since April 2015