What is The Transmodern Festival? by Cara Ober

Projections, part of the Transmodern Fest, 2011

What is The Transmodern Festival? by Cara Ober 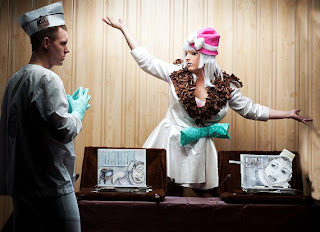 Across the Line : The Transmodern Festival is all about crossing boundaries, moving not just between spaces, but also between genders, races, ages, media, and philosophies.

“Puppet artists are the new rock stars,” says Marsian DeLellis. “Like Lady Gaga, one day I can only hope that the details of my next puppet show will be leaked to the media and that I will have to go on tour early.”

Based in Los Angeles, Marsian has developed a brand of eccentric adult puppetry that oscillates between adorable, abject, campy, and earnest. Inspired by current events, tabloids, and pop culture, Marsian’s oeuvre includes short-form puppetry, puppet slams, musicals, video, and performance art. He brings his show to Baltimore this week, for the Transmodern Festival, where he’ll perform Fudgie’s Death, a neo-noir tale of desperation and depravity, and give a talk at MICA about “synthetic pleasures.”

“This will be my first foray into Baltimore, which I have always viewed as a sacred place,” Marsian says. “The city that fueled the films of John Waters, Divine, and the Dreamland Studios has been so influential on me and my generation of peers.”

The Transmodern Festival is not easy to explain to those who have not experienced it. “At first, I thought that the Transmodern Fest was gender-related,” Marsian admits. “The title made it sound like it was a synonym for post-gender or some kind of deconstructed version of gender performance and I assumed that I had been selected because I play with gender as one aspect of my puppet shows.”

In fact, the festival is about crossing all manner of lines. “The Transmodern is all about defying genres,” says festival organizer Valeska Populoh. “It blurs boundaries between performance and the performative, installation, video, and sound. There is a unique capacity within the festival to consider different ways of thinking about performance and making in general. This festival is all about transcending boundaries, moving between spaces, as well as gender, race, age, media, and philosophy.”

To read the entire article, go to: http://www.urbanitebaltimore.com/baltimore/across-the-line/Content?oid=1404912

What doesn’t fit in their apartment waits in storage as they rotate pieces in and out, rendering their home as both a gallery and a domestic space, enriched by their love for art and artists.

So much happened in the past two weeks, but I tried to ease my way back into the internet.