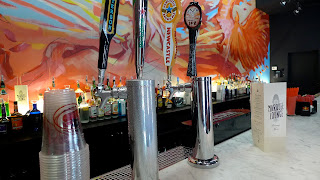 Lori Carns
Sometimes Bigger is Better: The annual Big Show at Creative Alliance showcases such a huge range of talent, there’s something there for everyone. by Cara Ober
“What amazes me every single year is how many people out there make art,” says Jed Dodds, director of the Creative Alliance for twelve years. “And we’re talking about a serious and energetic art practice here, a high degree of commitment, despite having other careers and jobs.”

Looking across the vast numbers of works in The Big Show, the Creative Alliance’s annual all-members exhibit, one senses that Dodds is correct. Not only is there enthusiastic participation, but also a visual conversation that unfolds on the gallery walls, and a rich creative community comes into focus. In The Big Show, large, abstract oil paintings hang next to experimental photographs, while landscapes and still-lifes abound in a myriad of colors and techniques. There are a number of portraits, including former Mayor Sheila Dixon, Andy Warhol, and President Obama, and nudes of all shapes and sizes peacefully coexist, creating a multi-faceted reflection of the show’s participants.

The Big Show is an annual tradition for Creative Alliance members, and includes a huge opening party complete with a live band (Junkyard Saints this year), food, and bar. It’s an opportunity for local artists to exhibit with a large number of their peers, to make new friends, to sell their work, and to gain valuable critical feedback. “The Big Show is the first exhibit the CA ever did,” explains Dodds. “It’s the DNA of the organization. If you are a member, you are guaranteed to participate in at least one show a year and it’s a great opportunity for artists.”

This record-breaking year includes the most participants ever since the center opened sixteen years ago—two hundred and twenty-five artists. According to Dodds, one motivating factor is sales. “We tend sell quite a lot of work from this show,” says Dodds. “There’s something here for everyone, so lots of people come out just to purchase work.”

Kini Collins has been a member of the Creative Alliance since 1995 and has participated in every Big Show since. “I’ve sold my exhibited piece every year and I’m hoping to keep my streak alive,” says Collins. “The Big Show is a gathering of the tribes, all ages, abilities. By including everybody it emphasizes the art making process more than the skill level of the artist. I like that the head honchos at CA devote a whole lot of time, money, and exhibition space to maintain the grass roots beginnings of CA as a members organization.”

Part of Dodds’s challenge each year is to build a maze of freestanding walls in the center of the large main gallery to accommodate all the work. Dodds feels strongly that each piece of art needs a strong wall and an optimal spot. According to Linda Franklin, a Creative Alliance member for eight years, “Jed does an amazing job each year of hanging the show. There’s a lot to be learned by studying the interrelationships between pieces that he puts near each other.”

Sheer numbers can make reviewing this type of exhibit a challenge because there are too many interesting pieces to mention. However, for a variety of reasons, a few of the works included really stood out from the pack and bear mentioning. Immediately, a large, brightly patterned painting caught my eye. Bounce Free by Eric Garner is a confident riff on Jasper Johns and employs crisp, all-over patterns of squares, stars, and circles in warm and metallic color. The artist used sparkly plastic gems to emphasize certain areas, and text in another section that hints at advertising. Nearby, Danielle Blue’s shadowbox sculpture, The Real Housewives of Baltimore, echoes Garner’s decorative touches and kicks it up a notch. The sculptural object is a large carving knife, completely covered in decorative red, white, and black crystals. The red drips down from the point of the knife, hinting at a glamorous yet violent deed.

There are a number of one-of-a-kind unique pieces here that you won’t see anywhere else in town. John Ellsberry’s Portrait of Mayor Sheila Dixon in shades of blue captures a physical likeness of the mayor, while creating a somber mood with expressive color. Alice Jones Redmond’s diorama of Picasso in his studio, titled Artist in Residences #10 Picasso—Art is Stronger Than Life, is also on the unusual side. Redmond’s doll-sized Picasso, complete with striped shirt and Euro-sandals, paints a Cubist masterpiece in an animated studio filled with tiny tubes of paints, brushes, easel, famous paintings, and a tiny guitar. (This is the tenth in a series of artist dioramas—Redmond exhibits one at The Big Show each year.)

More significant than individual works is the attitude of camaraderie and diversity that abounds from the Big Show’s walls. As Linda Franklin explains, “When I find out that someone has any interest AT ALL in making art, I try to get them to become a member of the Creative Alliance. I tell them that one of their works can actually hang in an art show seen by hundreds of people.”

Link to the original article on the Urbanite website here. And, for further incentive to visit The Big Show, here is a photo of the NEW Marquee Bar, with wall mural by Lauren Biolini.