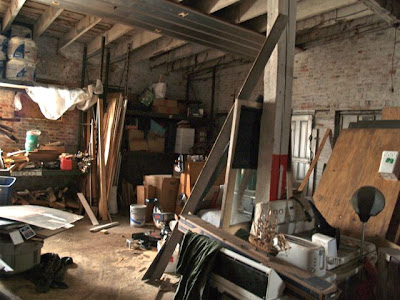 Haus Party: BrickHaus, Baltimore’s newest art space, is a gallery, studio center, and recording studio all in one. by Cara Ober

Located on the 2600 block of Greenmount Avenue, BrickHaus art center is aptly named. The building was originally an A&P Grocery at the turn of the century, and the two-story storefront and warehouse boasts sturdy brick walls, large windows, and its own adjoining parking lot, which is full when I arrive. At the loading dock in back, several people soak up the early March sunshine, seated on assorted furniture items and piles of wood. Ben Graham-Putter, one of the two co-founders of the space, greets me warmly and gives me an enthusiastic tour.

On the date of my visit, BrickHaus celebrated its first birthday. On March 15, 2011, recent MICA graduates Graham-Putter and Adam Farkas embarked on a journey to create a place and community that could further their artistic education and growth—a place for “like-minded creative people to come together, with shared facilities, and a professional exhibition space.” They found the building on Craigslist and, despite the numerous renovations required, signed an eight-year lease. In a year’s time, the building has transformed from a dilapidated warehouse to neatly framed studio spaces, an art gallery, and the beginnings of a recording studio, with professional wood and metal shops next on the list.

“We are paying a lot of money for all the renovations we’re doing,” admits Graham-Putter. Right now, the duo rent studios to nine artists, with rents ranging from $170 to $240 per month. They’re hoping to raise money from juried exhibits and exhibit entry fees in the future, but an integral part of the mission of BrickHaus “is to provide affordable studio spaces,” Graham-Putter says. “Money is tough for artists in general. … Unless you’re selling a lot of work, you’re leading a double life.” It’s a lesson he knows first-hand. Besides co-founding and managing BrickHaus, Graham-Putter works for a large events company in Baltimore and teaches ceramics at a senior center.

As we walk through the building, his enthusiasm for the space is palpable. “It’s a group effort,” he explains. “It’s all about synergy. All of us involved in the process, we have the same overall mindset—we’re trying to continuously improve the place and the programming, and to reach out to a large, public audience. We want to present highly engaging programming, showcasing local, national, and international artists.” BrickHaus’s inaugural exhibit occurred in November 2011 and was an informal selection of works from the resident artists. “It was an open house, open studios kind of thing,” Graham-Putter explains. “We had about 150 people at the reception and a great after-party.” Since that time, the space has hosted several other exhibits, including Rightside Up, Upside Down, an installation by George A. Schwab, and Concrete Poetry, a solo exhibition by Sean Lundgren.

The current exhibition, Fun-A-Day, is part of a national program spanning twenty-two cities across the country, in which artists create one small work each day during the month of January. It includes artists of all experience levels—students and untrained artists, as well as professionals—and the offerings include jewelry, drawings, mixed media, and even hand-painted baseball hats. Fun-A-Day fills the main, upstairs gallery and spills out into newly built studio spaces. BrickHaus did not initiate the project, but they agreed to exhibit it to support art making of all kinds and to bring a wider audience into their gallery.

Although it’s still partly under construction, the large upstairs gallery boasts high ceilings and professional lights donated by the Baltimore Museum of Art. “We have amazing lighting,” says Graham-Putter. “We have spots and wall wash floods and they are making our shows look really good.” The next upcoming exhibit is titled BAMF II, and is a reunion exhibition featuring fourteen MICA ceramics majors who graduated in 2010, including Jade Chen, Melissa Schmidt, Danny Knox, Emily Peters, and Graham-Putter. The show opens on April 7 and will feature artists who currently reside in Baltimore and others who have moved away. Besides being an opportunity to exhibit, the show is a way to foster community between young artists who graduated together and to forge new connections and opportunities outside of Baltimore.

The show ties in with the overall mission of the place, which, Graham-Putter says, was central to his experience at MICA. “We want BrickHaus to be a forum for critique and artistic conversation, a place where we can continue to use ‘art speak’ vocabulary and continue to hone those skills, to stay academic and current,” he says. Beyond exhibitions, BrickHaus is planning a series of weekly seminars for resident artists that is “an informal group meeting, kind of like grad school with no grades, a place where we can share information and resources, to be able to encourage one another, provide inspiration and support, and help with artistic and professional practices.”

Along with their educational aims, BrickHaus will be screening the new series of ART21 documentaries this April, before they are available on PBS. “We plan to pair them up with local discussions and artist talks,” says Graham-Putter. “We really want to engage artists, but also the general public into discussions about creativity. We want to bring art to a wider audience.” In the large, upstairs art gallery, resident artist Daniel Stuepnagel and several other recording artists have created a platform for digital projection, online community, and digital recording.

As we continue the tour, Graham-Putter shows me where the recording studio will be. We stop in front of a large pile of metal sheeting and glass, and he explains that this will all come together to create a soundproof recording booth. As he gestures to various walls and other piles of materials, pointing out where all the recording equipment will go, it is obvious that Graham-Putter’s vision for the future of BrickHaus is clear.

When I inquire about the name of the space, I am surprised to learn that BrickHaus started out as a joke. “After two months of trying out different names, most of which included the words Charm City or Baltimore, we were listening to funk music while we were working [and] thought of the song Brick House by The Commodores,” he says. “We thought it would be funny to be BrickHaus art space. The name stuck so we incorporated as Mighty Mighty, LLC, and the rest is history.”

BrickHaus art space is located at 2602 Greenmount Avenue. Come and visit the space for the April 7 opening reception of BAMF II.